The coast of Istria can rightly claim to be the earliest Croatian destination of the modern tourist era, its beautiful towns beaches made accessible to the elites of Europe via the country's first international rail connection. But in the century that's passed, improved transportation has gone on to reveal the whole of Croatia. Dubrovnik, Split and its islands took centre stage in the story of Croatian tourism, stealing the limelight from the sparkling northwestern peninsula. 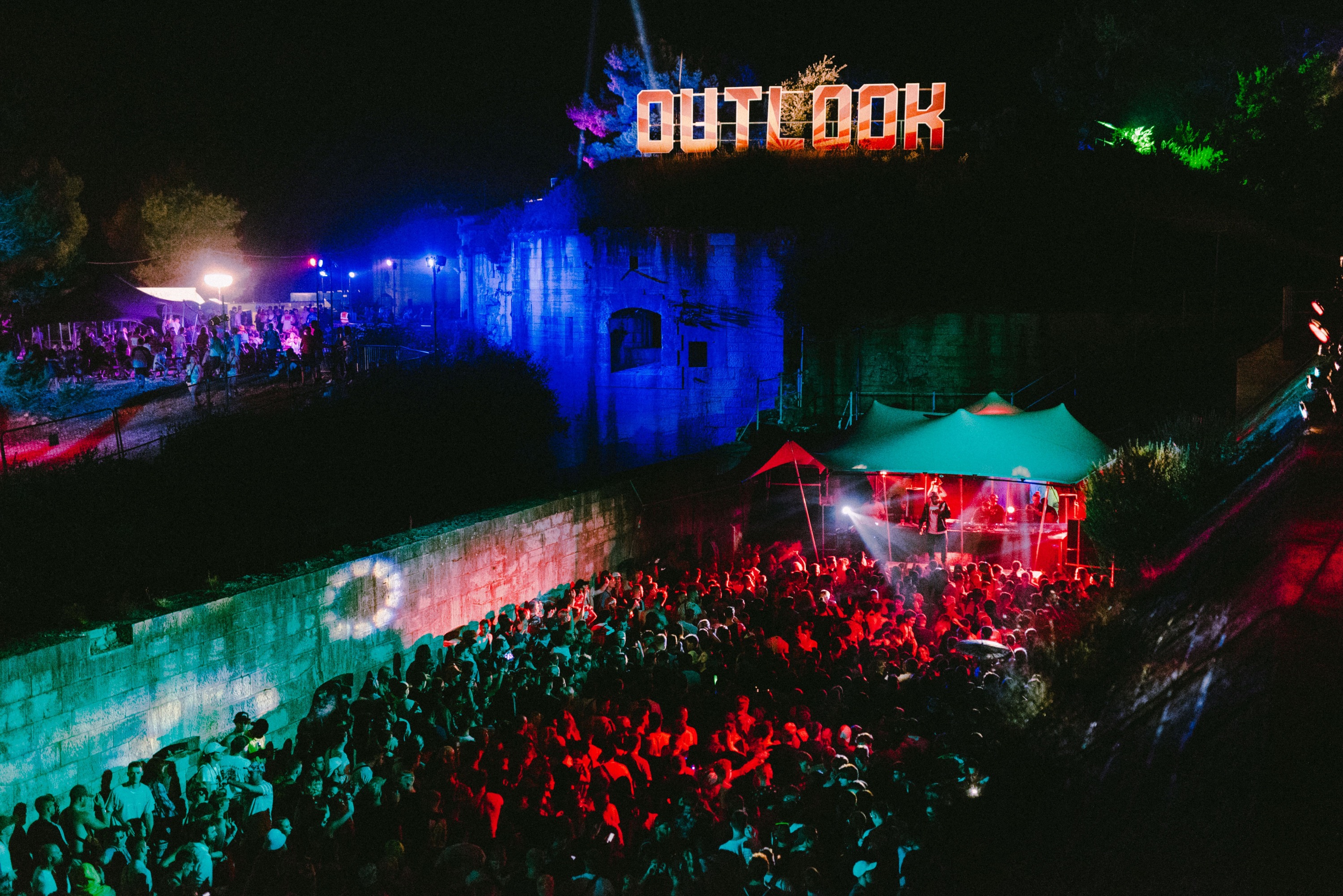 All that began to change ten years ago with the arrival of the international festival scene in Pula. First came Outlook Festival, the leading global event of the UK-born bass music scene, which incorporates drum n' bass, reggae, dubstep and subgenres. Next, its sister festival Dimensions appeared with a swish lineup of world-conquering house and techno DJs. Not only did the music of these festivals draw global plaudits, but so did the festival site, Fort Punta Christo. Its sprawling arenas were enhanced with lights, sound and production that marked these events as the best in Croatia and among the greatest in Europe. And when the press started to publish pictures of the festivals opening concerts, held within the spectacular backdrop of the city's astonishingly well-preserved amphitheatre, readers were amazed. Pula’s music festivals suddenly topped many's must-do lists. Within the decade, Pula became the third most Googled place in Croatia behind Dubrovnik and Zagreb. 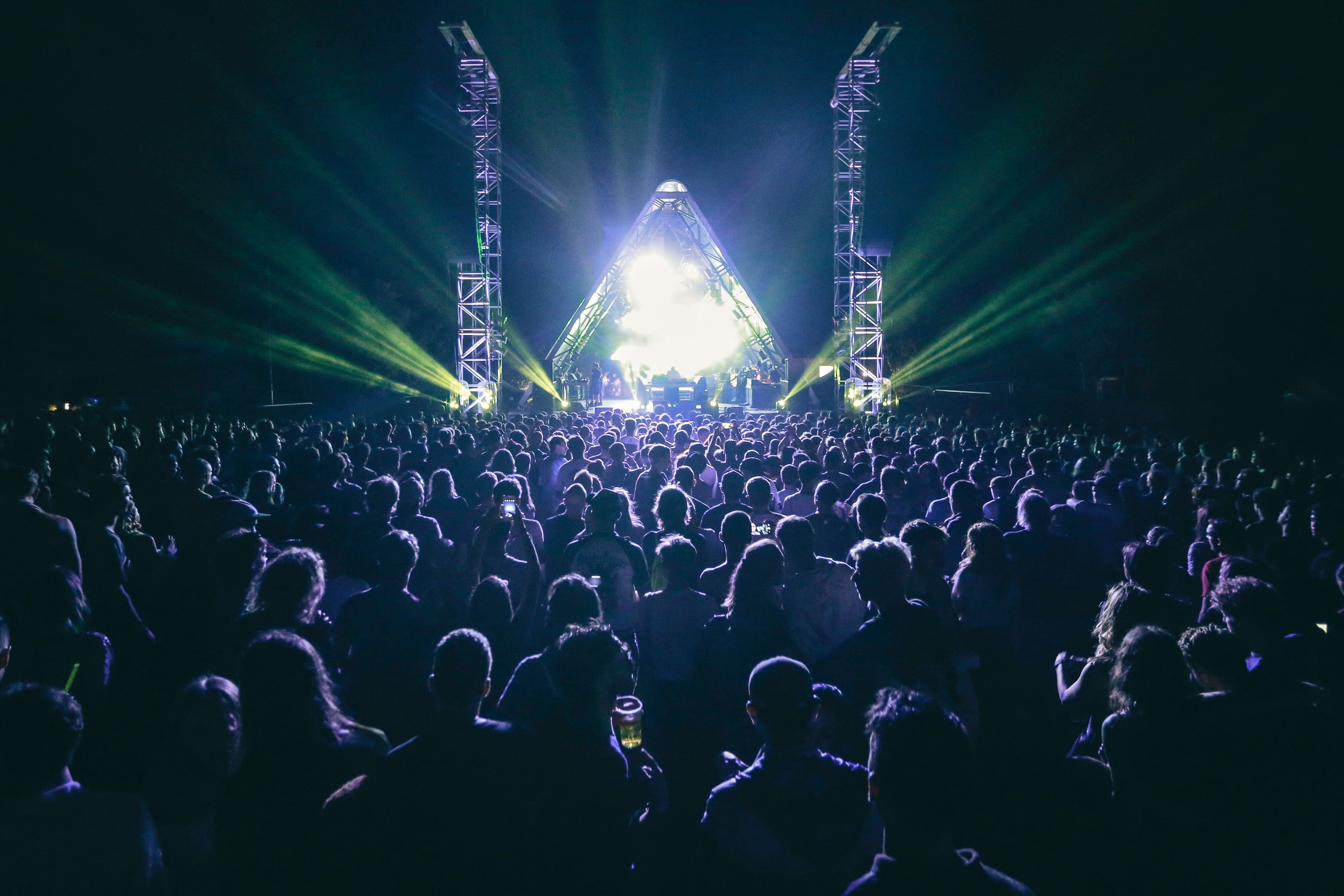 But the arrival of these two international events isn’t the start or end of the story. Croatia's festival scene evolves every year. Istria's festival scene may well look different in future seasons, but it’s essential to know that whatever shape it takes, it’s one moulded not only by the last decade but by a 27-year history of homegrown efforts in the area.

'At the start of the 90s it was the only place you could hold festivals in Croatia,' says Vedran Meniga, whose Seasplash reggae festival is very much Croatia's own precursor to Outlook and has been held in Pula since 2003. It was his expertise in holding the event which led to the arrival of the two international festivals and to his Pozitivan Ritam organisation becoming partners in both. 'In the rest of the country there was war, but in Istria, there was no armed conflict, so this was the natural starting point.'

Born in Šibenik, Meniga had moved to Zagreb to attend university in the '90s, where he formed Abrakha-Dub-R, one of Croatia's first dub reggae bands. Touring internationally, his musical path led him to Monte Paradiso in Pula, a punk festival which, at 27 years old, is Croatia's longest running. After becoming involved with its organisers and then its production, his experiences, coupled with his enthusiasm for reggae, inspired him to found the reggae-dedicated Seasplash in the same city.

'That was our background,' he says, 'DIY, punk rock. We just applied that to reggae and dub. The starting point for doing so had been what was happening in the UK, with punk bands like The Clash, Ruts and Stiff Little Fingers bringing reggae into their sound.'

Contacts Meniga made while touring internationally were invited to contribute to Seasplash's first event in Pula in the late ‘90s. Audiences were attracted from not only the nearby locale, but from all over war-ravaged Croatia, plus Italy and Slovenia. The template was set.

'After seven or eight years of Seasplash we received a request from the UK organisers of Outlook Festival,' he remembers. 'They'd had a disappointing second year and most of the problems had come about because of their new site in Novalja which they'd moved to from their first near Zadar. They called us to Pag for help with some aspects of the production, lights, backline, technicians and so on. We did our bit, but at the end, I saw that they were still not satisfied with the location. So, I invited them to come to Pula to see what we had been doing there. When they did, they decided immediately that they wanted to continue in Pula.'

The festival site at Fort Punta Christo was not without its difficulties. But Meniga had already held Seasplash in three different locations in Pula. With Pozitivan Ritam's help, Outlook held a very successful first year in the city.

'In 1993 when we first started there were no venues, no music media. Everything had been destroyed,' says Meniga, who was the original promoter to present Fort Punta Christo as an event space at the first Seasplash festival. 'That's one reason we started to look at old forts, three or four around Pula, and to clean them up. Today, if you look at a tourist map or website for Pula, one of the first things you will see is Fort Punta Christo. Before 1993, it wasn't even on the map. In that time, people were using it as a garbage dump, taking its stones to build new houses.'

From an unused and forgotten site on the city's outskirts, Fort Punta Christo became the global centre for the UK-derived bass music scene. Although this massively popular youth movement had regular club nights, it had no dedicated festival, no annual focal point and nowhere for a growing number of international fans to experience this sound. With Outlook's arrival at Fort Punta Christo, all of that changed. Its success ensured sister event Dimensions was a more than viable expansion and the attention lavished on the amphitheatre's opening concerts put the venue on the world stage; its track record of holding opera and folk concerts has now grown to include visits from some of rock music's big hitters, such as Pink Floyd's David Gilmour and, in 2019, the Foo Fighters.

The festival scene is a transitory and ever-evolving beast and this year, Pula's event calendar is changing. For the first time since the '90s, Seasplash will not be held in Pula, but in Šibenik. This surprise has been added to by announcements from both Outlook and Dimensions that 2019 will be their final year at Fort Punta Christo and at Pula Arena. Although this news is shocking, there are many reasons to be hopeful about Istria’s festival future. Not only is there a summer of riotous fun to be had at the last Outlook and Dimensions events held at the fort, but Meniga is adamant that this is not the end for Pula as a host for world-class festivals.

His glowing smile when discussing the future of a city he's operated in for almost 30 years is reason enough to be optimistic. 2019 also sees the city of Umag, in northern Istria, host the third Sea Star Festival. With its organisers from Serbia’s Exit Festival helping to attract many thousands of visitors to the city, Istria's standing as one of Europe's key festival and live music locations looks more than assured. 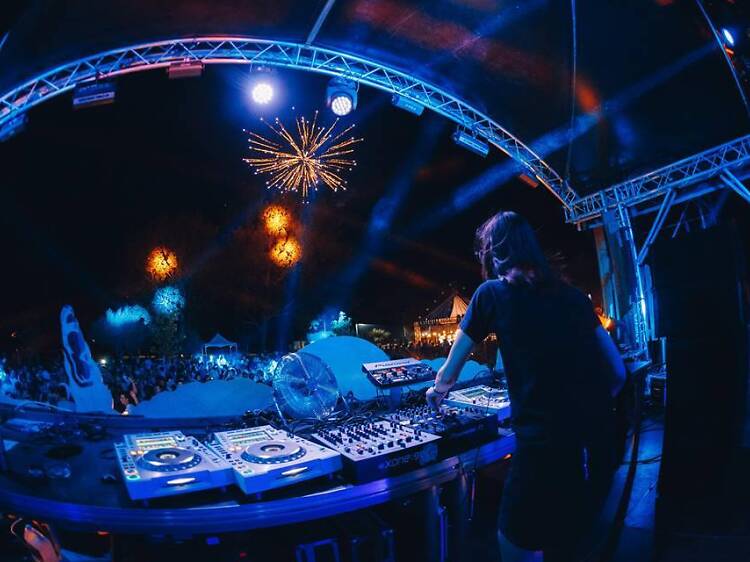 It looks as though the popular annual edition of this Belgian franchise might be skipping a year from its usual site in Omiš, Dalmatia. But ravers can console themselves with this new event in Poreč which promises 36 hours of non-stop techno. The event will use several locations in the town, beginning on Friday night at club Byblos with an extended session featuring Pan-Pot, aka German duo Tassilo Ippenberger and Thomas Benedix. They will be joined there by compatriot and Berghain resident Marcel Fengler. Getting the headliners out of the way first is a good idea, because the length of this continuous party may require too much stamina for some. The party moves to the beach for the daylight hours of Saturday, making it perhaps the country's first outdoor dance music event of the season. It heads back indoors at club Zodiak for Saturday night and Sunday morning. Also appearing on the bill are lots of homegrown DJs including Mozer, Bronski and Andrea Ljekaj. 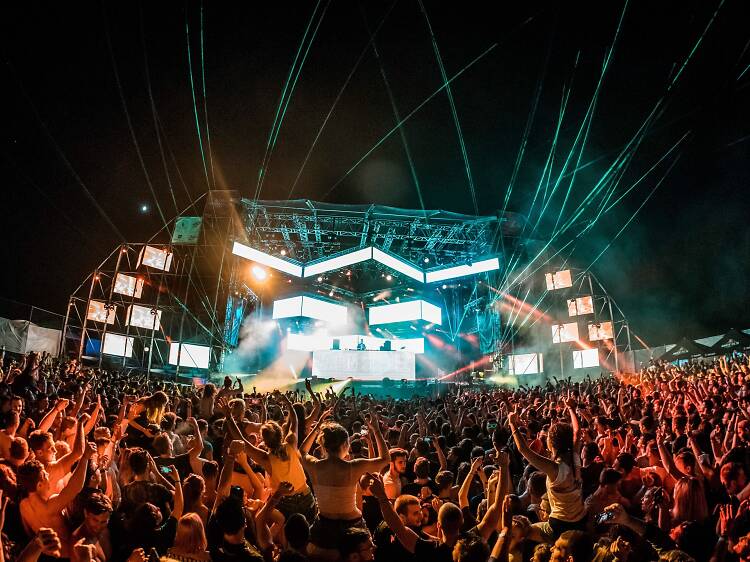 Though Croatia gets lots of plaudits for its summertime dance music festivals, there's no denying that one of the biggest success stories of the region is Exit Festival, held annually in Novi Sad, Serbia. These guys know a thing or two about putting on an attention-grabbing festival that draws an international audience and so it was no surprise to see them try their hand at staging an event in Umag. Successful previous editions in 2017 and 2018 brought the likes of The Prodigy to their grand stage which lies in the shadow of the venue where the famous ATP Croatia Open is held, with approximately 80, 000 visitors from Italy, Slovenia, Austria, the UK and all over Croatia attending the weekend, many filling hotel rooms in the nearby Stella Maris resort. This year’s event sees German trance-techno legend Sven Väth and Nina Kraviz appear as headliners. 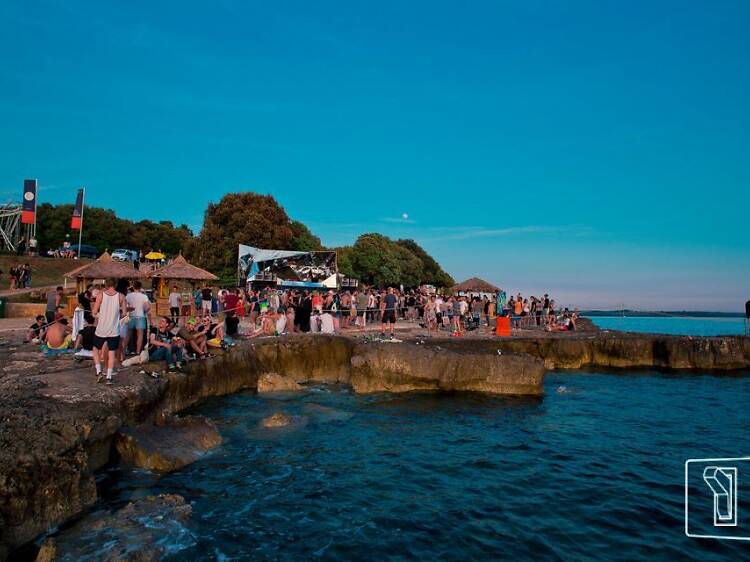 This Austrian brand has looked unsettled since arriving in Croatia, as though still searching for the perfect home. Indeed, rumours abound they’re moving to Obonjan island in Dalmatia. Though the lineup for their 2019 event is yet to be revealed, the location is still Lanterna, at the tip of a peninsula between Novigrad and Poreč. The site is one of the best in Croatia for beach parties, with dancers dipping in and out of the ocean enjoying spectacular sunsets as a backdrop to the beats. Organisers also hold a beautiful-looking event in Cape Town, South Africa, so they really know how to choose a good spot for a shindig. With previous editions having brought the likes of Blawan, Dopplereffekt, Egyptian Lover, Jeff Mills, Black Coffee, Jackmaster, Kenny Larkin, Martin Buttrich, Gerd Janson, Jeremy Uunderground, DJ Koze, Axel Boman, Juan Atkins and Rodriguez Jr, you should expect nothing less than the very best in underground techno, house and electro. 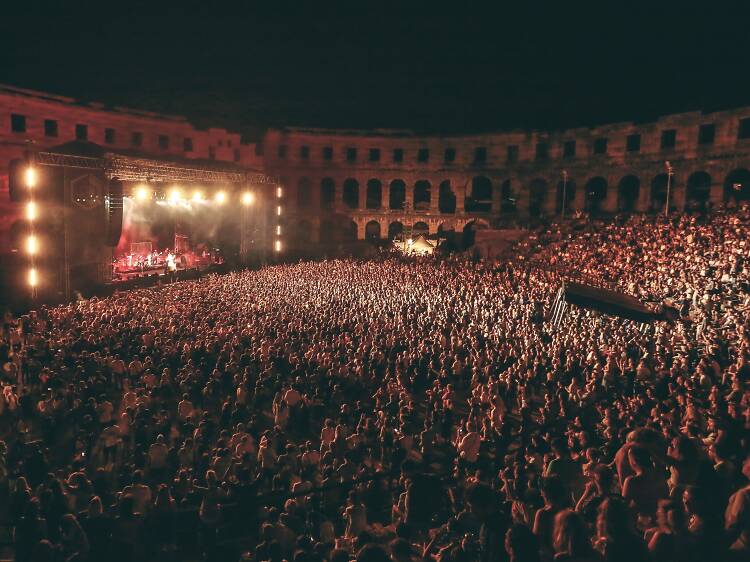 Celebrating its final year at Fort Punta Christo and Pula Arena (though not necessarily their final year in Istria or Pula), expect Dimensions to pull out all the stops for the end of a thrilling chapter in Istria's festival scene. 2019 sees the likes of Omar-S, Peggy Gou, Nina Kraviz, Joy Orbison, Helena Hauff, dBridge, Gilles Peterson, Call Super, Andrew Weatherall and Craig Richards play at the fort, while the arena opening concert will be handled by Objekt, Hunee and headliner Jeff Mills who will incorporate Afrobeat rhythm pioneer Tony Allen into his live performance. Alternative sounds on-site come from Sadar Bahar, Awesome Tapes From Africa and Mr. Scruff, pummeling techno from Blawan and DVS1, electro from DJ Stingray and DJ Bone plus DMX Krew and Radioactive Man, both of whom will perform live. Other live acts appearing include Larry Heard aka Mr. Fingers, Octave One and Dam-Funk. 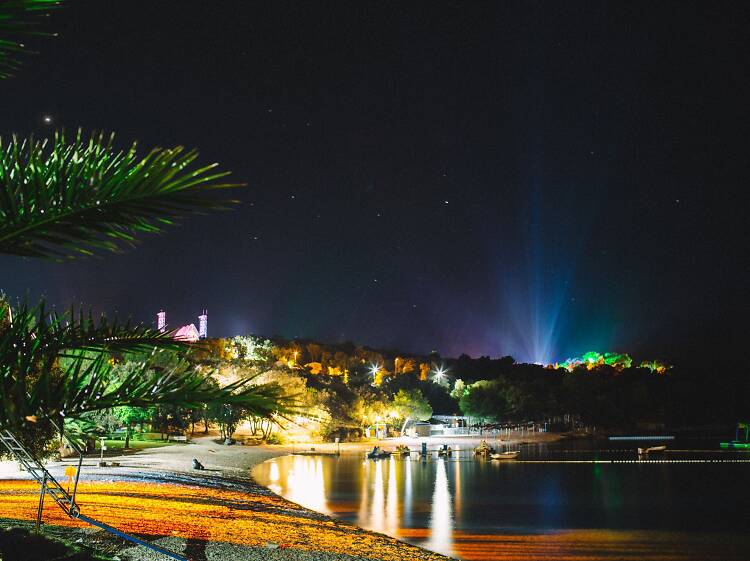 When it comes to bass music, the UK-derived scene that incorporates garage, dubstep, hip-hop, dub, drum ‘n’ bass and reggae, there really is no more important annual fixture than Outlook. Not only is the festival significant for this youth movement, it is also the starting point for positioning Pula as one of the most famous destinations in Croatia. Like Dimensions, it waves goodbye to Fort Punta Christo and Pula Arena this year after a decade of hedonistic antics. Chase & Status, Bugzy Malone, Goldie (live) and dBridge are among the main site headliners with Andy C, Shy FX (live), Gentleman’s Dub Club and Mala performing at the opening concert in the Amphitheatre. Grooverider, LTJ Bukem, Calibre and Randall represent drum n' bass at the main site, grime and rap contributors include Ghetts, D Double E, Aitch and Unknown T, with Channel One Soundsystem, Iration Steppas and Sister Nancy & Legal Shot Sound being among the reggae contingent. Also appearing are DJ Zinc, My Nu Leng & Dread MC, Joker, Matt Jam Lamont, Chimpo, MC Fox, Chunky and MC DRS, DJ Rap and Holy Goof.