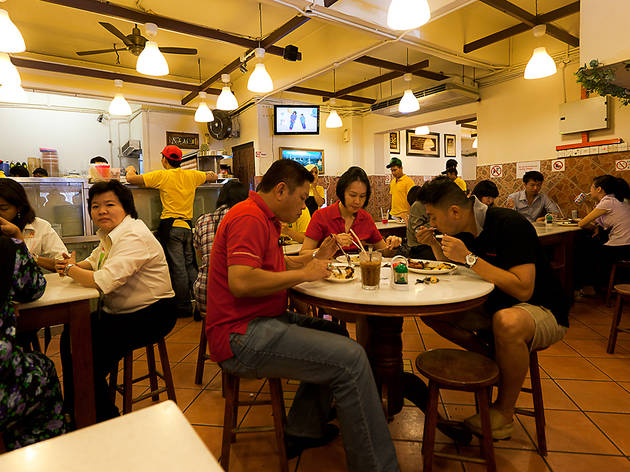 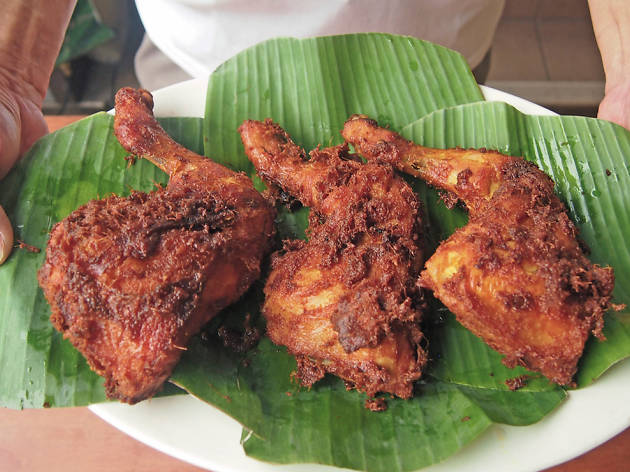 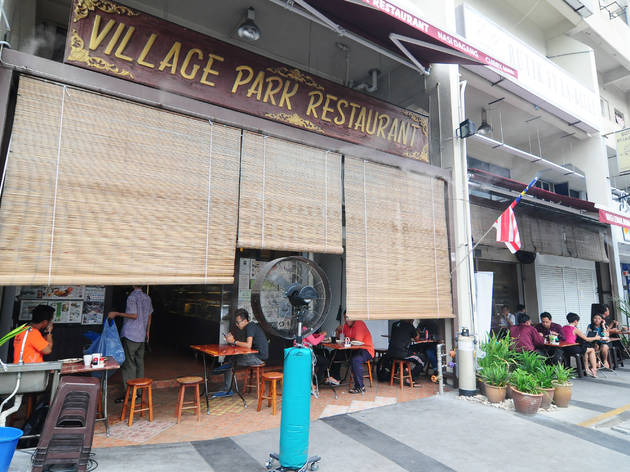 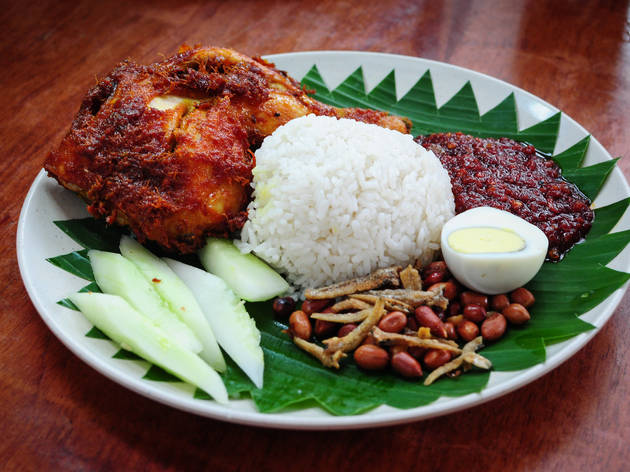 In the three years I’ve been frequenting Village Park I’ve not once tasted its widely touted nasi dagang, a delicious (or so I’ve heard) rendition of the Terengganu-stye coconut-scented red and white rice accompanied by fried chicken and sambal. It’s not for lack of trying. With this dish, timing is everything; once it’s ferried out from the kitchen late in the morning you’ve only a wee two or three-hour window to partake before its sold out.

If the restaurant’s nasi lemak is any indication, the dagang must surely be a stunner. An order of the former, enjoyed one recent morning, featured rice so expertly prepared that each coconut-y grain stood perfectly distinct from the other, in a snow-white mound that gave way with the barest nudge of a spoon. Accompanied by ikan bilis, peanuts, cucumber slivers, and blood-red sambal characterised by a tease of sweetness and a slow, creeping burn, the dish would have made a fine breakfast in itself. But I pushed the edge of the envelope, adding a ladle of sambal udang from Village Park’s tantalising display of curries, gulai, and vegetable dishes, and was glad for it. The shellfish’s firm texture announced its freshness and the sambal sauce, while eliciting a tingle in the lips, was mild enough to allow the shrimp’s briny flavour to come through.

No need to rush over first thing in the morning if you want to snag that nasi lemak, but making an effort to arrive at Village Park early in the am offers the opportunity to sample kuih that have usually disappeared by the lunch rush: warm-from-the-fryer keria (not quite cakey, not quite spuddy sweet potato doughnuts rolled in fine white sugar), plump grilled coconut rice logs stuffed with grated coconut, chilli, and dried shrimp, and otherwise hard-to-find cucur badak, crispy deep-fried dough pucks crowned with a single prawn and oozing a spicy chilli-coconut stuffing.

Despite its stunning success (the restaurant, its tables spilling out the door onto the five-foot way and beyond, down the stairs to parking spaces in front, is almost always packed, certainly never ever empty) Village Park has maintained the high standards that first attracted its regulars. The food tastes like it came out of a kitchen run by someone who really enjoys cooking for those who love to eat. Lontong swim in a coconut gravy crowded with big, rough-cut pieces of carrot, cabbage, and turnip and sports a big knob of crushed peanut paste enlivened with grated ginger, assam laksa floats huge shreds of fish, coffee is strong but not at all bitter, and the housemade kaya is one of KL’s best. If you haven’t tried the place, you should. I’m betting that if you do, you’ll soon be a regular.

Village Park was voted Best Ayam Goreng in the Time Out KL Food Awards 2014 and  Blogger's Choice in 2011. Our food awards are 100% voted for by the people of KL. This way, we guarantee that popularity and consistent performance are rewarded.