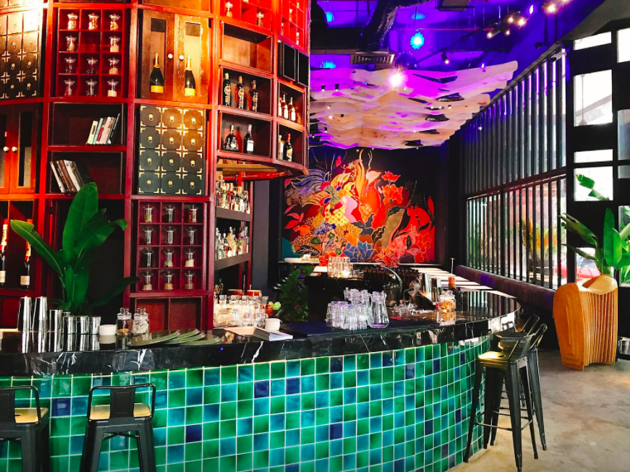 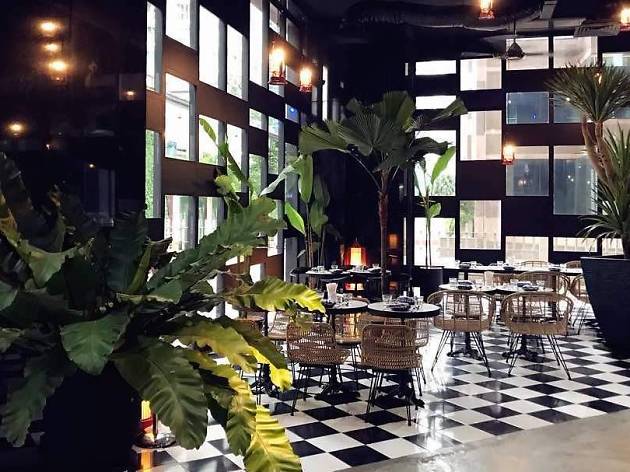 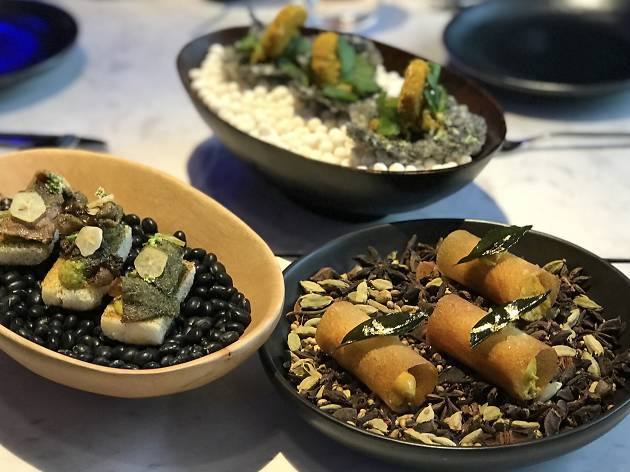 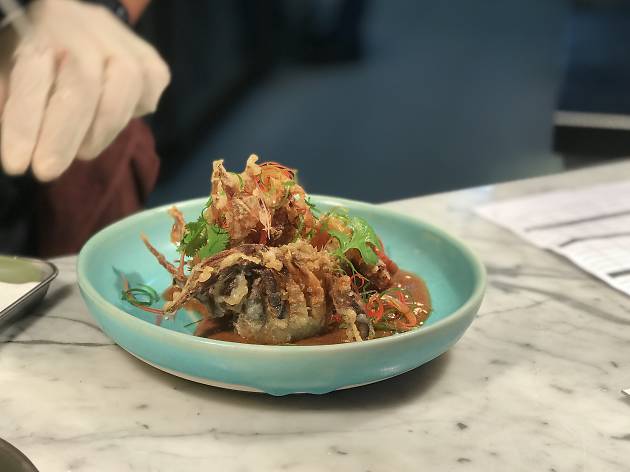 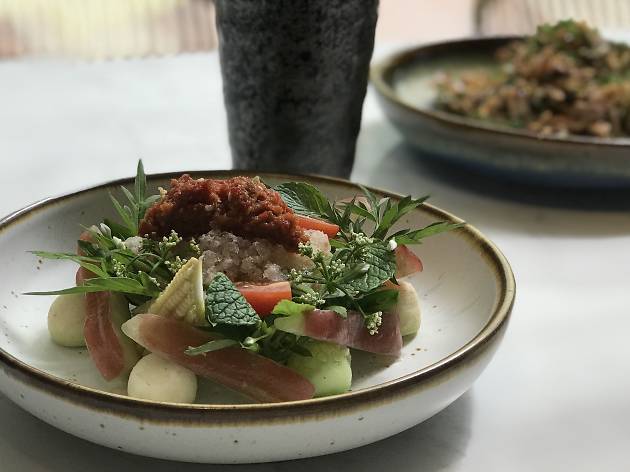 Just when we were worried that the year’s F&B scene will be little more than a succession of safe-betting brunch cafés and comfort-food restaurants, up comes Beta KL with their bold venture into modern Malaysian cuisine. Formed by the same folks behind Skillet @ 163, Beta KL radically departs from its European-focused elder sibling by focusing on Malaysian ingredients and flavours, while maintaining the modern techniques Skillet is known for.

Beta KL is divided into a dining area and bar that combine contrasting elements of a modern restaurant and a laidback hangout. In the dining area, cool blue neon lights, dark-coloured walls and an expansive floor-to-ceiling batik mural are set against the abundance of natural light, live tropical plants and bare concrete floors; while the bar is an equally intriguing mix of a high-end bottle service bar – complete with an elevated dance stage and cognac-stocked 12-ft tall bar – and a chill tiki bar that’s decked out with rattan chairs.

Helming the kitchen is Chef Raymond Tham, who is also the executive head chef for Skillet. A former culinary instructor at KDU University College – alongside Dewakan’s Darren Teoh, one of the chefs leading the charge for modern Malaysian cuisine – Raymond has used his research of regional cuisine and ingredients to craft a menu that celebrates humble and familiar dishes in new and surprising ways.

The starter dishes provide an insight to Beta’s novel approach to Malaysian cuisine. In Ox Tongue (RM27), razor-thin slices of ox tongue are served on toast with tart belimbing buluh and a gulai lemak purée of creamy turmeric leaves inspired by Minangkabau cuisine. Sago (RM30), meanwhile, is a bite-sized interpretation of Sarawak laksa – spice-coated shrimp is served with laksa aioli (think laksa broth in paste form) on a crunchy sago-and-squid ink cracker. Another popular starter – at least on Instagram – is the Inverted Karipap (RM30), where a delicate and crunchy potato crisp envelops a mild curry potato filling.

The salads and greens are a refreshing take on the ulam dishes we’re accustomed to. One standout example is the Spicy Garden (RM32) – seasonal ulam vegetables and jambu air are served with house-made sambal and a cincalok-infused granita. The result is a confounding, daring, yet delightful play of intense spicy hot and ice-cold savoury flavours unique to this restaurant.

The mains comprise a range of familiar dishes that have undergone a polished makeover. There’s the sous-vide chicken served with Bentong ginger pesto and lotus crisps (RM45) – a modern interpretation of Hainanese chicken rice – while the Peranakan-inspired Duck Leg (RM60) is a duck confit-meets-pongteh dish where twice-cooked duck is served with a sticky sesame and fermented black bean sauce. From the seafood selection comes Soft Shell Crab (RM45), which is a refashioned chilli crab dish made using tempura soft-shell crabs, and served with a reduced sauce made from chilli, torch ginger, spices and a flower crab stock. You’d do well in having a side order roti (RM8 for three pieces) to mop up the sauces.

Two desserts that you should consider getting are the Bird’s Nest (RM80) – a refreshing palate cleanser comprising a lychee granita housed within a solidified santan shell and surrounded by chunks of water chestnut and birds nest – and The Banana (RM38), an apam balik-inspired dessert made from dehydrated banana sheets served on a scoop of sweetened condensed milk ice cream, and topped with finely chopped peanuts and sesame seeds. It’s still early days yet for 2018, but if this is where modern Malaysian cuisine is headed to, we’re starting to feel optimistic over how the coming months will pan out.