The best restaurants in Cais do Sodré

No other neighborhood underwent such a transformation like this one and that change brought us great places to eat. Don’t get confused with the amount of options and stick to our list of the best restaurants in Cais do Sodré

In past decades, Cais do Sodré was mostly known as something of a red light district, but little remains of that reputation. About four years ago, the neighborhood began having cool bars, pretty stores and it became a major nightlife hangout. If you’re the party animal kind, book a table and line your stomach in one of the best restaurants in Cais do Sodré.

The best restaurants in Cais do Sodré 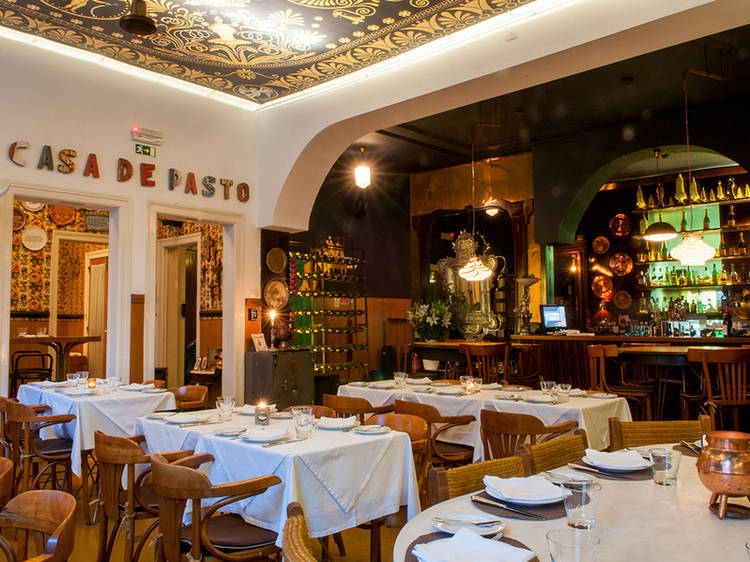 In late 2016, Diogo Noronha left the Mainside group, owner of Casa de Pasto (and also of Rio Maravilha and Topo). The restaurant, which looks like an early 20th century family dining room and serves reinterpreted Portuguese cuisine, needed a new chef. The chosen one is the Guimarães-born Hugo Castro, a practitioner of his grandma's old-fashioned cooking who promises to stick to the basics. The transition is being phased in slowly, and the new menu will only come out in the spring. Until then, the list changes weekly according to seasonal availability.

– Despite the traditional menu, the techniques employed are sophisticated.

– Mick Jagger had dinner there in his latest trip to Lisbon. 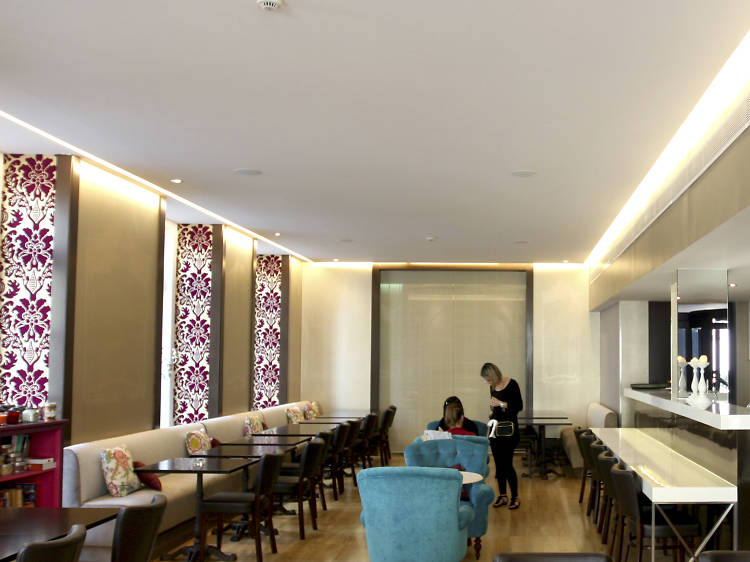 Thanks to the smashing success achieved by the Cascais Confraria, its management team decided to bring this Japanese restaurant to Lisbon. The only thing missing from its Cascais location is the cute outdoors area, but everything else is here. The house is known for its hot Philadelphia rolls (the menu's most coveted item), niguiri skins (grilled salmon skins), unagui no tarê (eel and avocado in a tarê sauce) and several sushi pieces with some fusion mixed in. Take your time, everything is done wisely and calmly (and with no addition of strawberry or tropical mixtures).

– Trust the sushimen's creativity and ask for a shareable combination dish.

– This is the Lisbon venue, but take note of its Cascais headquarters' address: Rua Luís Xavier Palmeirim.

– Or else try the neighbouring Time Out Market. 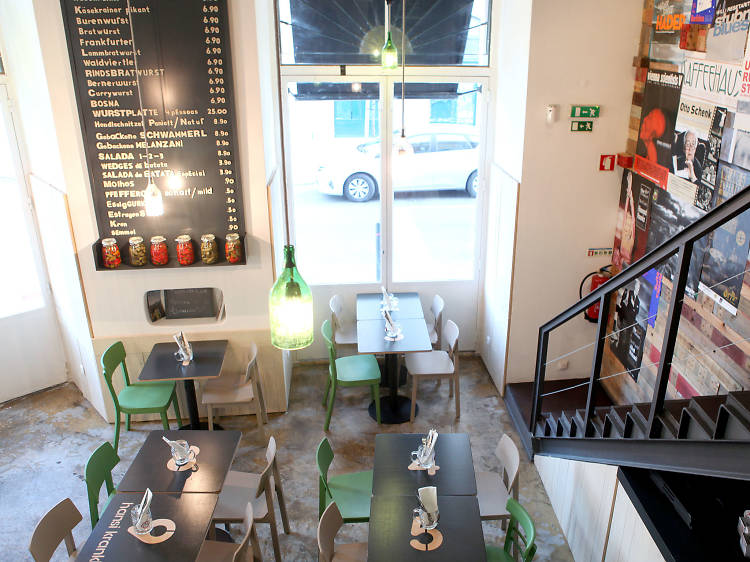 After showing Lisboners what good homemade sausage is, the proprietors of Kaffeehaus decided to devote it a whole restaurant. Lisbon's first Austrian sausage factory is in Cais do Sodré and its raw material is artisanal; it comes from a butcher shop in Vienna that dates from the 1950s and is currently owned by the father of one of the proprietors. The menu offers 11 different sausages, some of them classic and others a bit different. On top of the list comes the käsekrainer, a best-seller in Austrian kiosks, lightly smoked and filled with Emmental cheese.

– Side dishes include pickles, wedges and radish roots.

– Try the lammbratwurst, filled with lamb and beef.

– Hansi is short for Hans, one of Austria's most popular given names. 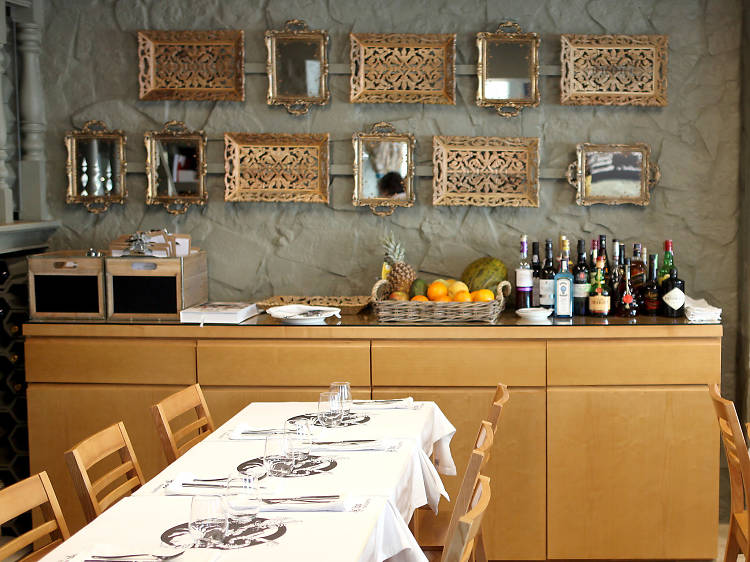 The Ibo family keeps growing. First came a seafood restaurant, then a cafe with an ice cream parlour, and all that within the Cais do Sodré. But the main performer is still the firstborn, which is also one of the temples of Mozambican food in Lisbon. This is the only restaurant in town where, on sunny days, you'll have to wear shades indoors – it's that bright. Most important: try the crab curry, the wild shrimp Laurentina style or the Zambeze-style roast chicken.

– Take-away is available, but you can also get an Ibo cook to go to your home.

– The outdoor tables are in a splendid location.

– National Geographic moment: Ibo is an island in the Quirimbas archipelago. 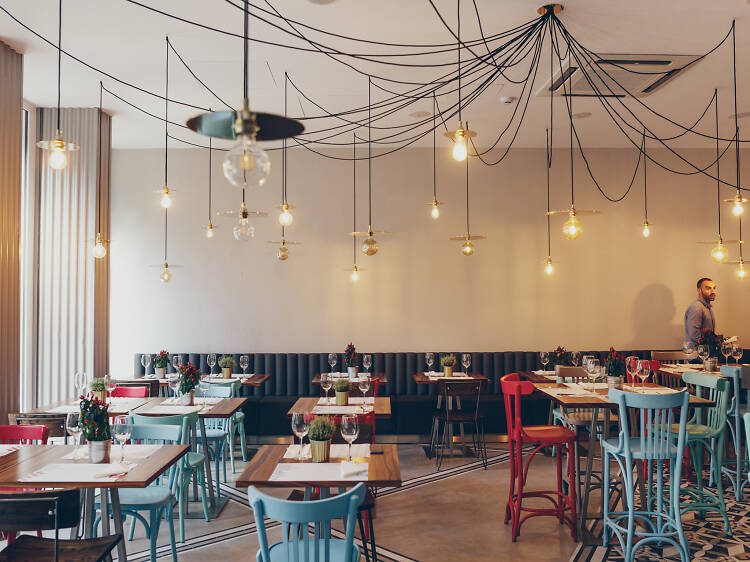 This Lebanese restaurant opened by the end of summer 2016 and generated a lot of hype in its early days: because of its location (a busy and getting busier area) and because of its cuisine. Muito Bey serves Lebanese tapas-style food (called mezze), unique and healthy. This place will make Lisboners become familiar with words like zaatar (a mix of basil and thyme), lahmé (minced meat with parsley, tomato and bell-peppers), jebné (fresh cheese) and kafta (beef, lamb or chicken kebab).

– Bey is the airport code for Beirut.

– Muito Bey is also a pun on the Portuguese “muito bem” (“very well”).

– The homemade bread has been praised since day one. 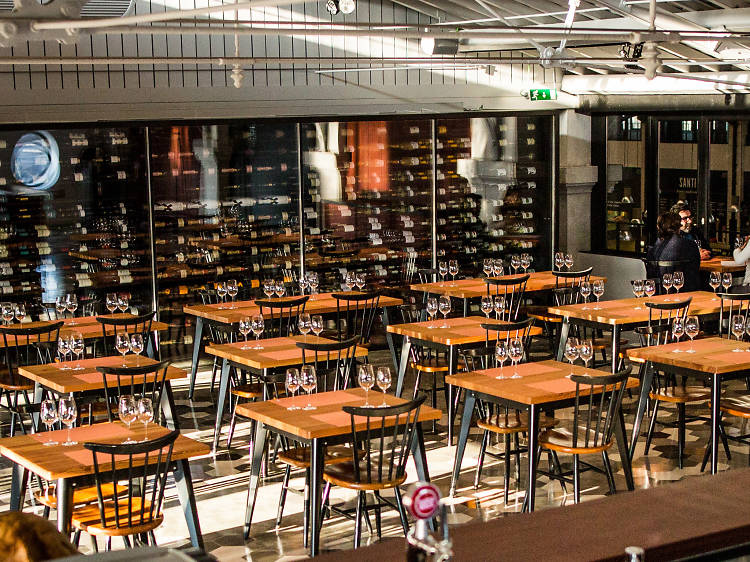 After months of speculation and rumours, the iconic Pap'Açorda did really close down and move wholesale to a new 800-square metre venue in the Ribeira Market. Two large rooms with a kitchen between them, a cute bar and a great view of the food court and the Luís I Square park. But doubters may be put at ease: the new restaurant keeps the same chef, Manuela Brandão, the same staff, and the same soft crust pies, prawn “açorda” bread soup and delicious breaded lamb chops.

– The old venue was nice and cosy, the new one is nice and roomy.

– It has a direct link to the market's new bar, Rive-Rouge (by Manuel Reis).

– The chocolate mousse remains the same and still comes to the table in a huge bowl. 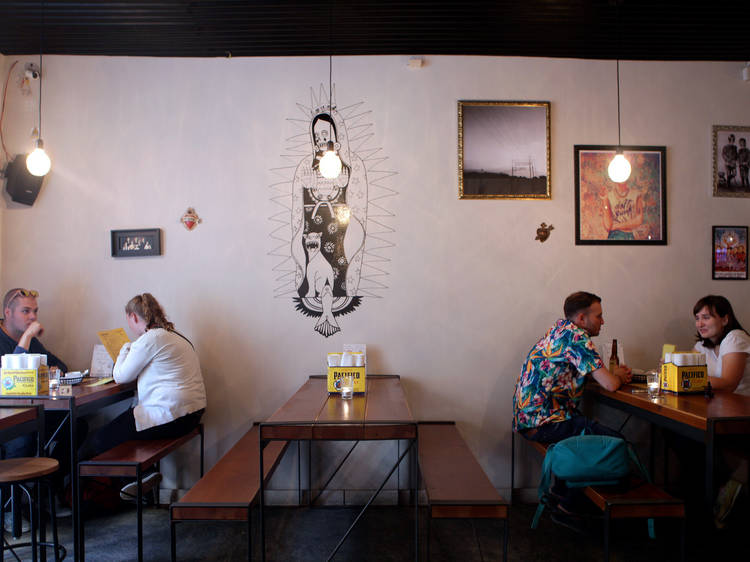 It's not by happenstance that Pistola y Corazon hosted the latest two Time Out Lisbon anniversary dinners. The mood is relaxed, the music is good (you can follow them on Spotify) and there are no manners at their tables: you eat with your hands, you get your mouth and chin filthy, you spend some three napkins per hour and you drink tequila with your meal. As hundreds of other people in Lisbon, we love this taqueria, the first real one in the city.

– Keep your cup full – you will need a lot of fluids.

– To get a table, either stand in line or have a very early dinner. 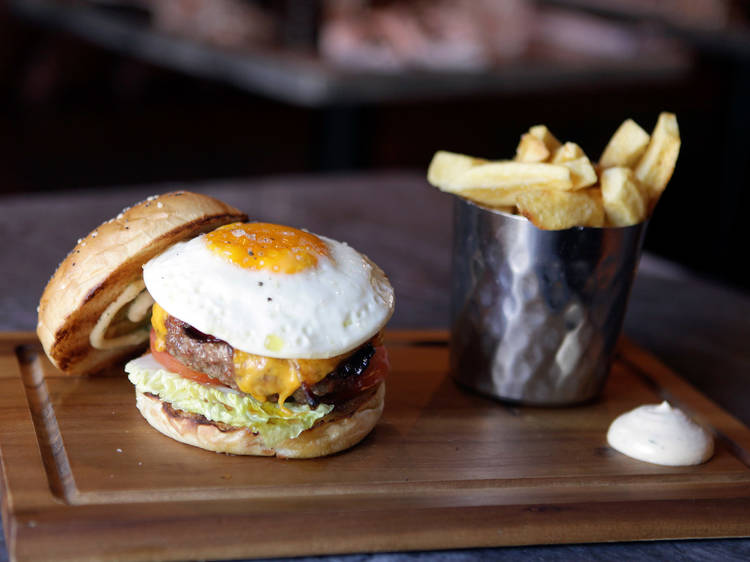 This carnivore restaurant in the Cais do Sodré could only be more successful if it was bigger. The menu is totally devoted to meat, apart from a couple of vegetable or cheese appetizers. The highlights are the six different steaks – including “picanha”, entrecôte or chuletón de buey – served in wooden boards with cherry tomatoes and cherry tomato relish. The restaurant belongs to Multifood – which also owns Honorato, Delidelux and Zero Zero –, a group that has two great chefs among its staff, Sá Pessoa and Diogo Noronha.

– There are eight different dips and also eight side dishes to choose from.

– The meat comes from Ireland, Spain and Uruguay, to be grilled in a Josper oven.

– For a quick meal, they serve great veal or steak sandwiches.