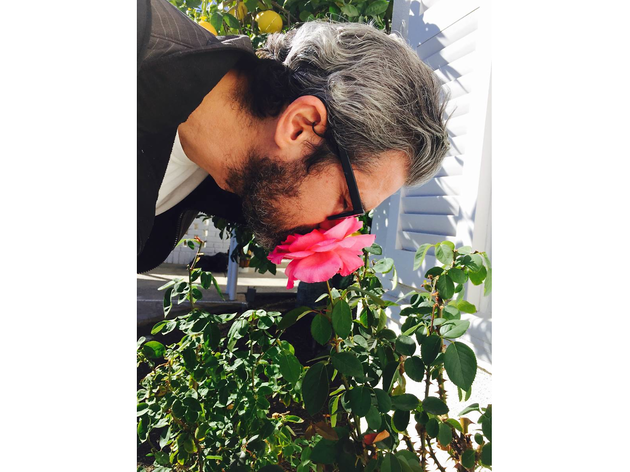 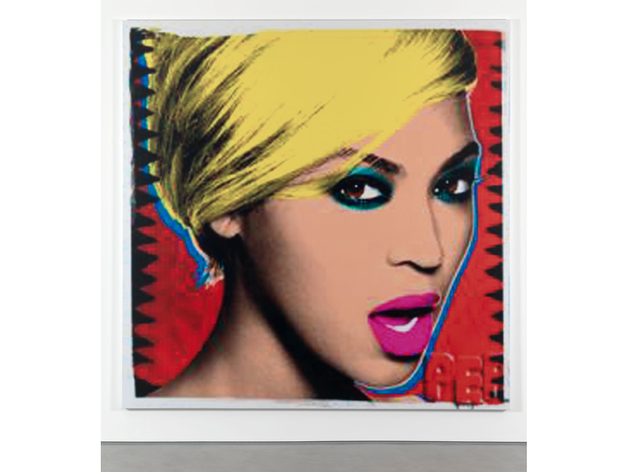 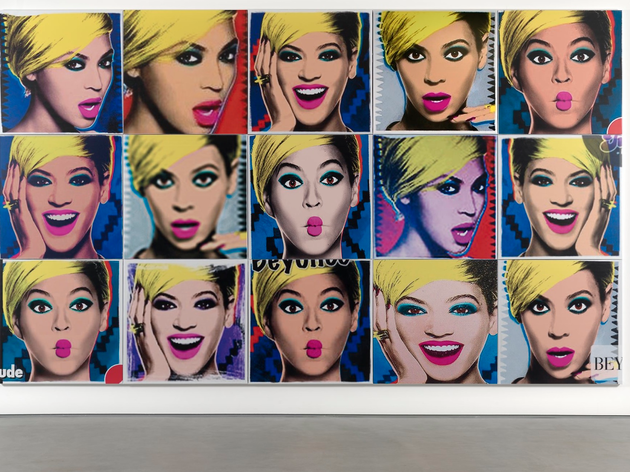 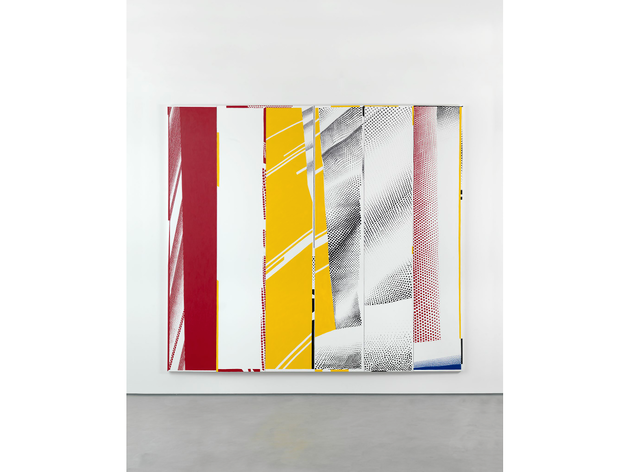 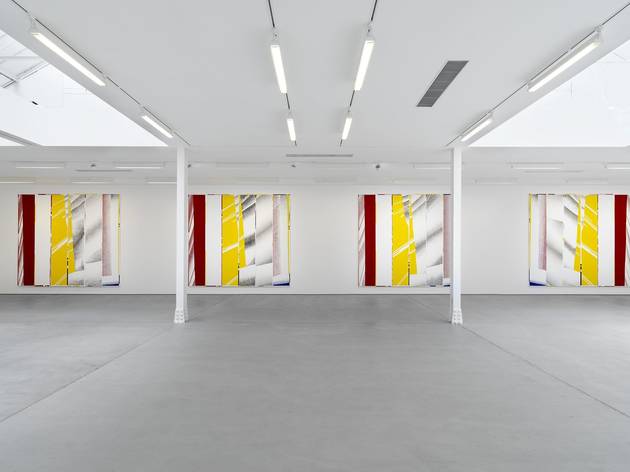 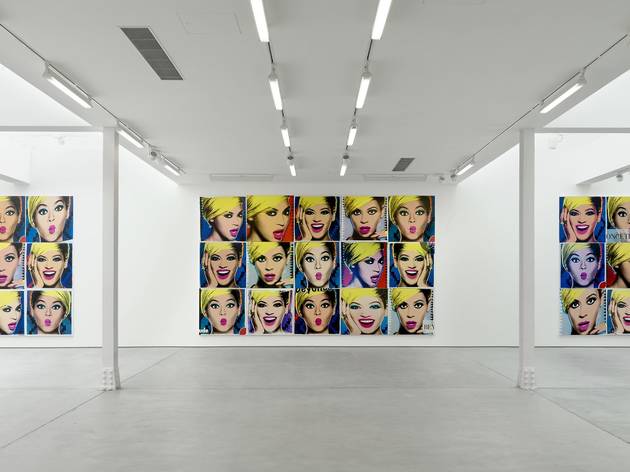 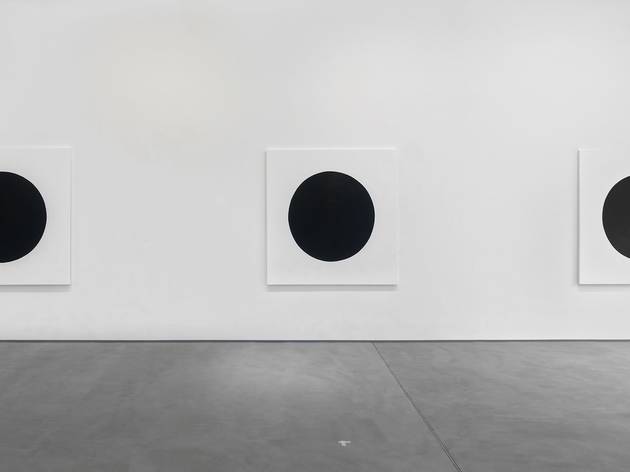 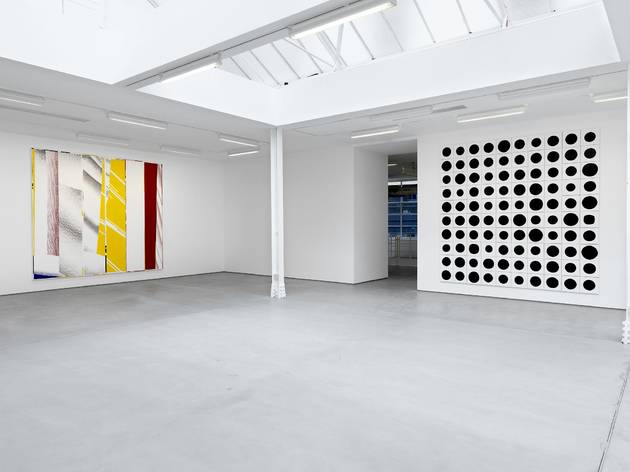 How would you describe your work to someone who hasn’t seen it?
‘It’s about people.’

Why the mathematical title for this show?
‘The title – “304.8cm Paintings” – is metric for ten feet, the height of all the work in the show. It’s a painting show with three bodies of work, all involving translation and distortion.’

I’m glad you said that, because Beyoncé looks a bit odd in some of the images.
‘Much of the imagery is appropriated but filtered in some way, either by the hand or computer. The images of Beyoncé are from a Pepsi ad campaign. I’d previously paired them with images of polar bears from a Coke campaign to create a broad metaphor for capitalism, pseudo democracy – everything really. But then it occurred to me that Beyoncé didn’t need to be paired with anything.’

Your work in the past has dealt with celebs of fluctuating circumstance, like Lindsay Lohan, but Beyoncé is a solid-gold star. What kind of challenge did using her image bring about?
‘Weakness and flaws in a star create pathos and empathy. That’s how fans connect. Obviously, Beyoncé doesn’t work that way – she’s all about strength and power. She doesn’t reflect a human condition so much as a corporate condition. You can buy a Beyoncé can of Pepsi and a Beyoncé vegan meal. She in herself is a metaphor for capitalism, for everything, for everyone.’

Has she bought your work?
‘Not to my knowledge.’

How would you feel if she took one of her famous art selfies in front of your paintings of her?
‘Happy, because that would presumably mean that she liked it and wouldn’t want to sue me. There’s nothing derogatory about the work – I think she’s an immensely talented and culturally significant figure – but you never know how someone might take things.’

There’s an obvious nod to Andy Warhol in your Beyoncé pictures. What kind of work do you think he’d be making if he were alive today?
‘Reality TV? He basically invented it, so maybe he’d want to capitalise. And I suppose he’d have a 20-year-old Pat Hackett [Warhol’s long-time friend and editor of “The Andy Warhol Diaries”] instagramming and tweeting for him.’

Looking at your Lichtenstein-inspired mirror paintings, up close some are, forgive me, a bit sloppy. How much free rein did you give your assistants?
‘Well, it’s a particular kind of handmadeness here. The work has a sort of humanist aesthetic of wrongness. Usually the hand of an assistant is rendered invisible by the process employed. Here it’s amplified. The panels are painted freehand from a small, page size printout of a Lichtenstein painting. The painters are instructed to duplicate the original without imparting any personal style. The catch is that only paint and brushes can be used – no pencil, ruler, stencil, projector. So it’s not that the painters aren’t trying – I stress “do your best” – but it’s basically an impossible task, so in a sense, every mark ends up being wrong. Once you accept that, though, every mark becomes OK and right.’

Ditto the big grid of hand-painted dots. I love the ones that are really off – almost square. They have character. Are you happy when people do as you ask, but happier when they don’t?
‘I actually don’t like it when people don’t do as I ask because all I ask is that they try their best. Sometimes I take it personally when they don’t. But as far as I could tell, everyone pretty much did. Where my control lies is in trying to communicate clearly and getting everyone to follow the rules. If they do, on some level, all the dots are equal for me – none are better or worse. Regarding the squarish ones, believe it or not, those tend to be amongst the most laboured over. Everyone’s brain and body is different, and for some people, it’s just really, really hard to paint a curved line.’

Do you mind if people don’t get all the layers of reference? What if someone just came in and went: ‘Ooh, Beyoncé,’ or ‘Woo-hoo! Pop art!’?
‘That’s inevitable and it’s okay. You can walk in and out and get something pretty quickly, and maybe even have a satisfactory experience. But there’s more to discover if you spend time with the work and look more closely. And you don’t even have to do much. The work is highly optical, almost animated in that regard. Things just start to happen.’

Interview magazine said you ‘might be the cleverest artist alive’. How does that make you feel? Sounds like a pressure.
‘My, I’ve never heard that before. I thought I was more the plain, straightforward type. But your question certainly is a pressure – it’s like you’re baiting me for a clever response. There’s nothing worse then a failed attempt to be clever, so I’m not even going to try!’

Okay, then. What’s the one piece of art you’d like to own?
‘Owning art gives me anxiety – it’s too much responsibility – but I did see something recently at a re-sale gallery that I coveted. It was a Warhol portrait of Lorna Luft in these really off ’80s colours – peach, burgundy, royal blue. It was just so secondary, what with the palette, and Lorna not being Liza.’

Do you have any studio rituals?
‘When the studio’s full [of assistants], like for this project, I feel compelled to act as DJ. That’s actually quite a pressure, having to come up with eight hours of music to play each day, that a room full of 20 people who you barely know will like. One woman, I discovered towards the end, was wearing earplugs the whole while.’