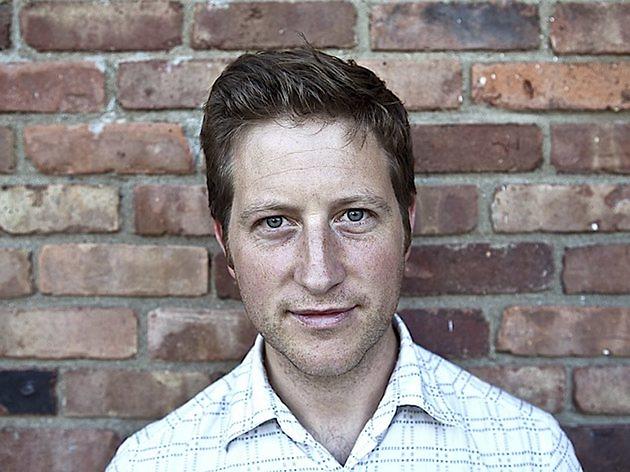 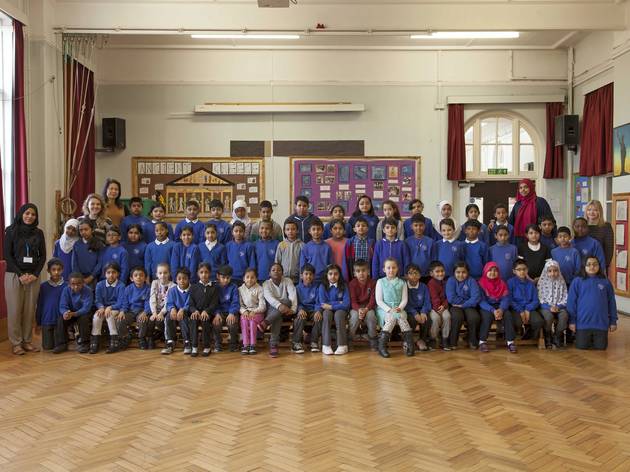 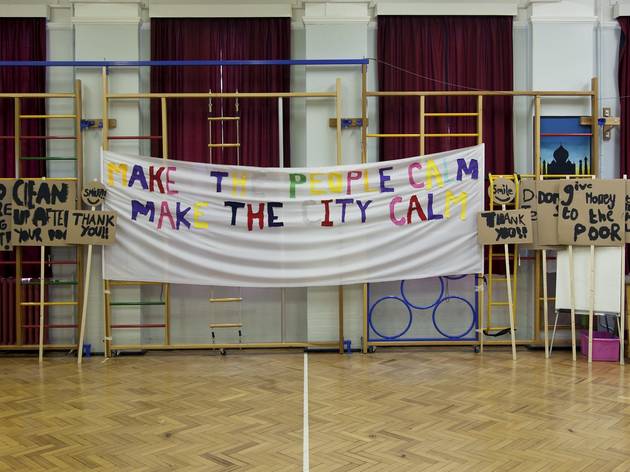 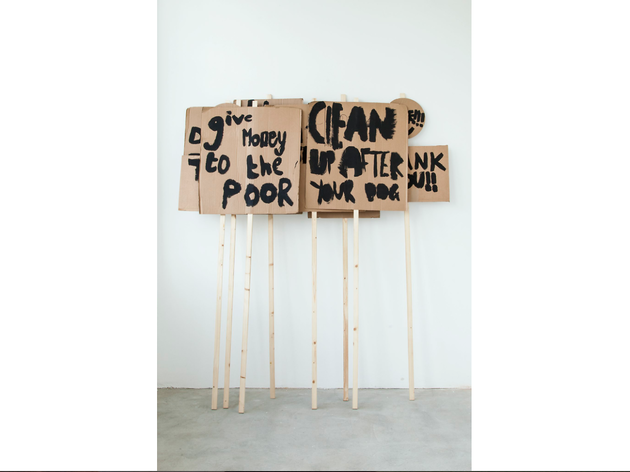 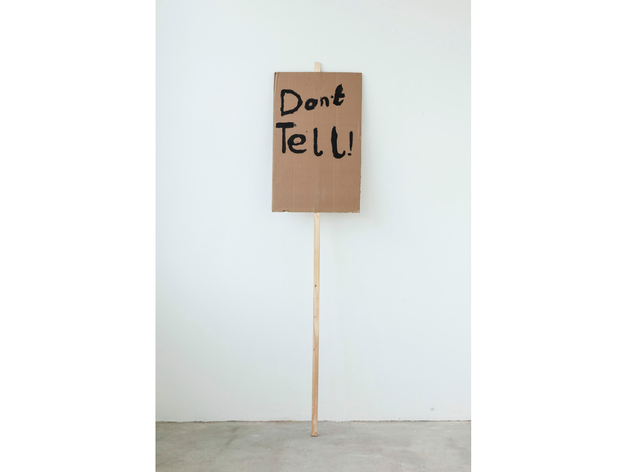 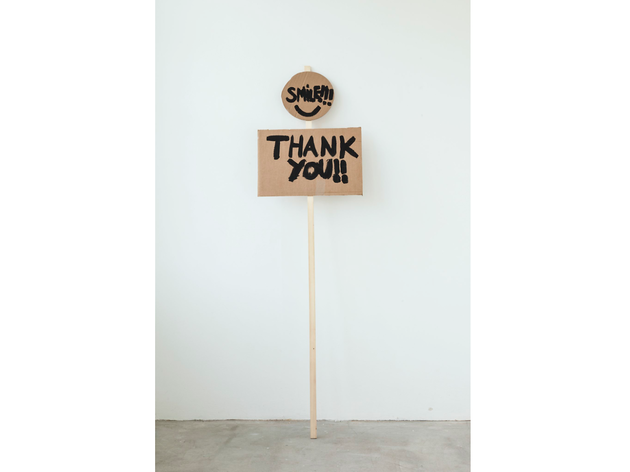 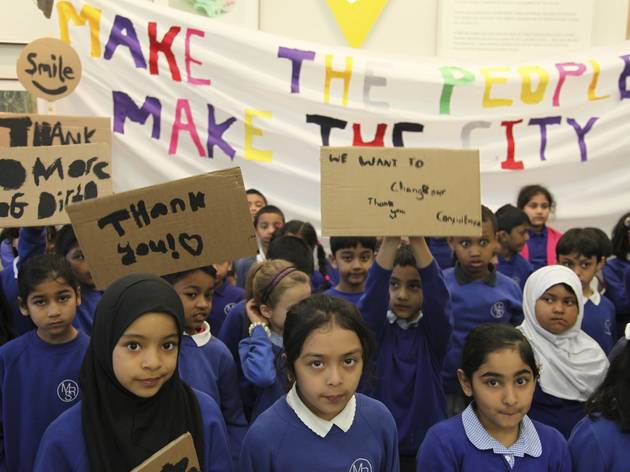 7/7
Notes on Protesting performed at Whitechapel Gallery, 1 May 2014 with Marion Richardson School, London. Performance commissioned by the Emdash Foundation
Advertising

Peter Liversidge is a community-minded conceptualist on a mission to put a smile on your face. You may have seen his collection of ‘Free Signs’ in the Whitechapel Gallery’s 2013 show ‘The Spirit of Utopia’, for which he also hosted a comedy night and brought a magical summer snowstorm to the East End streets. Now he’s back at the Whitechapel with ‘Notes on Protesting’, a display of videos and placards penned by local primary school children who, it turns out, are peeved with puke on the pavements and have serious beef with tomatoes. Martin Coomer caught up with him.

How did you get involved with this project?
‘The Whitechapel has a very good, very forward looking education department and one of their partners is the Marion Richardson Primary School. It’s been a year since I started working with them.The kids were six and seven at the beginning.’

Isn’t that a bit young to be thinking about protest?
‘First off we started talking about rules, why we have them at home and at school. I was trying to get them to think about what rules are and how they can be changed, so at school you talk to your teachers and at home you talk to your parents but if you wanted to look at rules in a wider sense you could go to your MP.’

And when that fails?
‘We tried to look at protesting from a positive point of view. So, we were looking at how you’d want to change things and why you’d want to protest. We also looked at the United Nations and how there is a sense of international law, or rules as we put it.’

What did the kids want to change?
‘A lot of stuff. ‘Clean up after your dog’ was one. It wasn’t me being an adult saying: I know what you lot feel. You want to sing about bullying. The one thing I didn’t want to do was go in and imagine what they would want to demonstrate about.’

How did you work their ideas up into songs?
‘I have absolutely no musical skill but we ended up with 14 pieces. One’s a humming piece, then there are some clapping pieces. In a couple of pieces the melodies are borrowed from different songs, for example, there’s a PJ Harvey song “The Words That Maketh Murder” which ends with “What if I take my problem to the United Nation?”. We borrowed that and changed the words. We also borrowed the melody from the last couple of bars of Dusty Springfield’s “You Don’t Have to Say You Love Me”, which has become “I don’t like cooked tomatoes, just so you know”.’

What’s your favourite lyric?
‘We don’t like the winter cold or the falling snow / Or the vomit left outside the school / We don’t like all of the poo / It’s a slalom that we don’t want to do.” It’s not quite Lennon and McCartney, but it’s up there, I think.’.

And how did you explain that what they were doing was art?
'That was the most amazing two hours. I’ve done quite a bit of teaching at degree level and these children were on it so quickly. They more or less got immediately the idea of art not having to exist as a tangible thing, and the idea of performance being a moment in time, that it isn’t a sculpture or a painting, it’s a mixture of experience and circumstance and architecture and all the things that we know it possibly could be. They really understood that.’

What will be on show at the Whitechapel?
‘We’ve performed the piece twice already. So the two videos of the performances will be on show and a lot of archive material from the rehearsals, photographs, drawings, as well as all the placards. Then there’s the book we produced for the May Day performance last year which has all the lyrics in it. We’ll be performing it again on May Day this year. Do come along. Even when the performance doesn’t go in a way that perhaps I would wish it to, it’s amazing.’

What are your must-see London artworks?
‘Not artworks as such, but the British Museum, Billingsgate market, British Library, Science Museum, Serpentine, Royal Festival Hall, Smithfield market, Scala, taking my sons to watch county cricket at The Oval or Lords, landing at Heathrow – approaching the airport over London – or flying out from City Airport, the view from Greenwich Park looking back towards London, swimming at the Aquatics Centre, seeing hand-written notes in shop windows… It’s hard to know where to stop.’