Richard Wentworth is one of our greatest sculptors. So what’s he doing making a painting on the roof of a multistorey car park in Peckham for the annual ‘Bold Tendencies’ exhibition? Time Out meets him to find out

What were your initial impressions about making work for a car park roof?
‘I walked up here and I thought: Oh my god, they want me to put some big blob on the roof. And blobs are blobs. They’re very hard because we’ve had 100 years of big things – it’s hard to do something better than the Cenotaph, I think. So I was standing up here thinking: Don’t say yes when you mean no, don’t promise something you can’t do. Then I started thinking: actually it’s really unusual to be in a space like this. It’s not at all uptight and as a piece of realm it is absolutely incredible.’

Why incredible?
‘It the nearest thing I’ve ever been to in London which is as democratic as being in an aeroplane. When you’re in a plane and you look out of the window and you see us, the consequences of us, you sort of go: oh my god, that’s High Wycombe, that’s the M40! So I suppose I felt it was like a double democracy. You’re standing up here in this enormously sociable space looking at something which humans are responsible for and you can’t see any humans!’

The venue is probably best known as Frank’s Café. Did that have any bearing on the work?
‘Well, you’re in this kind of accord up here and, of course, your behaviour changes a lot. There are a few places like this that exist in London, but mostly London is filled with a sense of purpose. The typical view is: I have to get somewhere quickly and there’s somebody going the other way. So I was working from a very powerful feeling about an arena.’

Where does the snaking form come from?
‘You know that thing when your pen doesn’t work and you scribble round and round? I always think it’s very funny that sort of mark making, which isn’t really intended. It’s a mark to see if something will mark, but it crosses itself, so in order to proceed you go backwards and then you go forwards. I expect in high maths there’s a name for it. I think they’re lovely because they’re filled with energy, frustration: the fucking pen’s not working! I think our lives are like that. Mostly we are going backwards, then if you’re really lucky there’ll be a little event and you’ll be propelled forwards.’

Are we supposed to follow the lines, like a maze?
‘Not really but one of the things I’ve noticed up here, as down there, is the hilarious behaviour of us, how obedient we are. People being quite drawn into it, even though there’s not very much there at the moment, because it pulls up the light as you move your position. Yesterday, when it was sunny, we all became slightly childish. It was a very nice feeling being together, and its physicality made us physical in a different way.

So is it a painting, or interactive art?
‘What I’m doing is scenography. I’m sure if were round the back at the opera house, they’d say: Yeah, we’re always doing this. But they don’t get this audience, and they don’t get the audience on the stage.’

And why are you painting on the floor?
‘Well, I think the history of the floor is a fantastic thing. I think that maybe before we knew how to attend to the ground, maybe we simply couldn’t be civilised. Maybe it’s the ground that makes us civilised because why else would you sweep, or why would you fill in a hole or knock off a tussock?’

How will you judge if the work’s a success or not?
‘I think part of its success for me will be if it’s slightly folkloric, where somebody is heard to say to somebody else “it’s not your sort of thing but you really ought to go and have a look at it because it’s really odd”, which I think is a nice way to hear about art. I hope what will happen is that it will tease people because they’re slightly standing in the work. But, I’m not being horrid to them. I’m not putting down dung!’

Can you see yourself working anywhere other than London?
‘I’ve lived here for 55 years and I actually am at a point in my life where I don’t know if I could leave. How would I get the kind of eventualities that London offers me? I don’t go out on an eventuality hunt: that would be very boring. But where would I go?’ 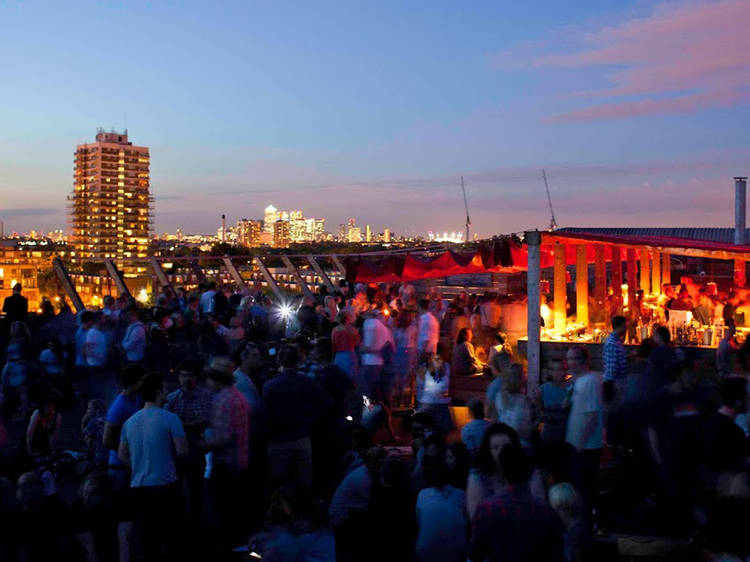 Bold Tendencies: what's on this summer?

Kicking off this May, Peckham's Bold Tendencies has a summer of fine food, drink, art and live music lined up. Head to south London's most happening multi-storey car park from Thu May 28 (until Sun Sep 27) and you can sip spritzes on the rooftop at Frank's Café, enjoy live classical performance, see cutting-edge sculpture by Richard Wentworth and stuff yourself with tasty snacks from Ali Baba's Bar.