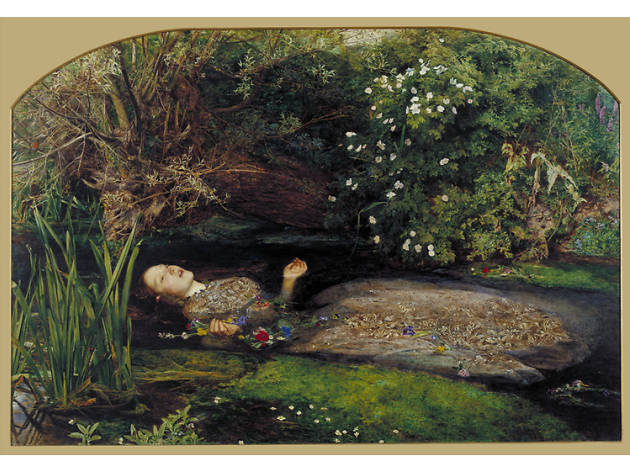 WHEN? 1851
WHERE CAN I SEE IT? Tate Britain
I LIKE IT See also 'The Fairy-Feller's Masterstroke'

Being an artist’s muse wasn’t always a glamorous job, as poor old Elizabeth Siddal discovered when she posed as the tragic Ophelia from Shakespeare’s 'Hamlet'. Over a four-month period, the Pre-Raphaelite painter Millais had her lie in a bath of water so he could capture the perfect atmosphere of Ophelia’s watery demise. It paid off though, as Siddal’s deathly composure set within a flowering brook is one of the most compelling, haunting and admired paintings in the Tate collection. It’s good to have Ophelia back after her international tour. 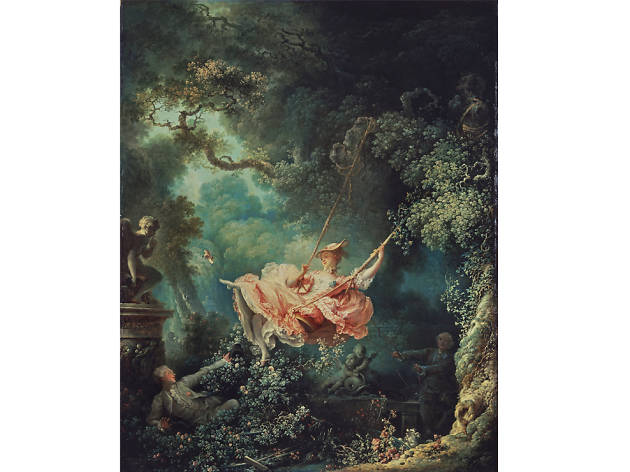 The premise for this racily romantic rococo confection began like a particularly bad, blue joke: the lady on the swing with the frilly bloomers being pushed from behind by the bishop in the bushes. The painter eventually omitted the religious slight but positioned the Georgian gentleman who commissioned the picture in an even more compromising position, staring up at the stockinged legs of his young mistress.
Advertising 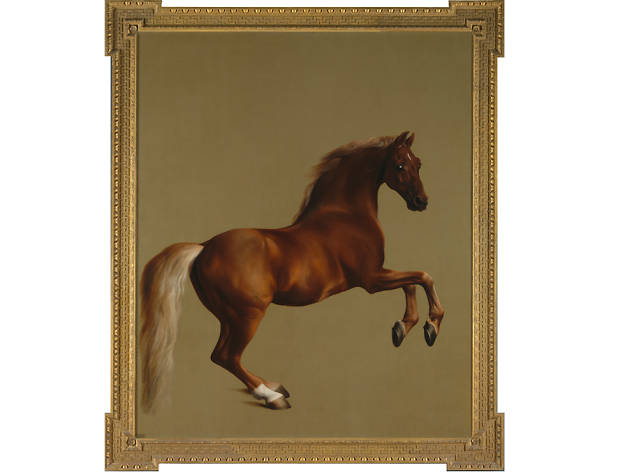 Stubbs’s portrait of a prizewinning racehorse is about as simple an idea for a picture as you could get, yet it raises all sorts of questions. Why add shadows beneath the rear hooves, if the background is a flat plain? Why is the horse rearing? Why does it look terrified? Deprived of any conventional context, we are forced to reassess Whistlejacket as more than just the successful product of carefully nurtured bloodlines. Stubbs reinvests the beast with beastliness, creating something more like a 2D sculpture than a traditional painting. Its size, and Stubbs’s mindblowing technique make this work quite awe-inspiring. It dominates even a huge gallery space. One of those things you have to see in the flesh. 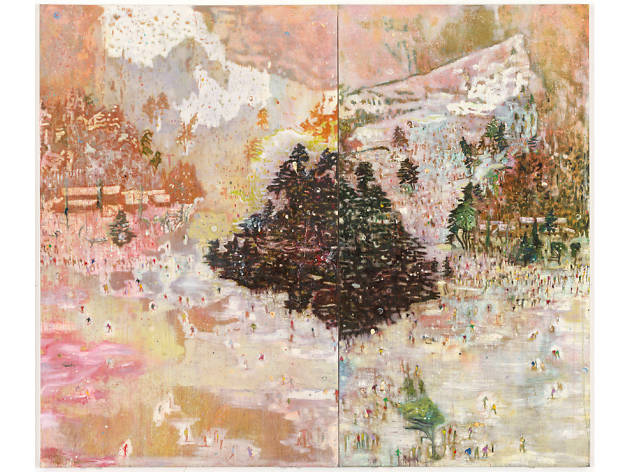 © Peter Doig
WHEN? 1994
WHERE CAN I SEE IT? This painting is part of the Tate collection but currently not on display. CheckTate Modern or Tate Britain to see when it will next be on show.
I LIKE IT See also 'Echo Lake'

Painting never died, it just went in new directions. But in the hands of Scottish-Canadian artist Peter Doig, it was dragged back to a time when canvases could create atmosphere, tension and beauty. He wasn’t going out and painting from nature though, he usually works from photographs – a neatly post-modern twist. So works like this brilliantly freezing snowscape transport you to another world, but it doesn’t quite work – it’s slightly off, uncomfortable. It takes you somewhere, but it leaves you perfectly confused and unsure in the process.
Advertising 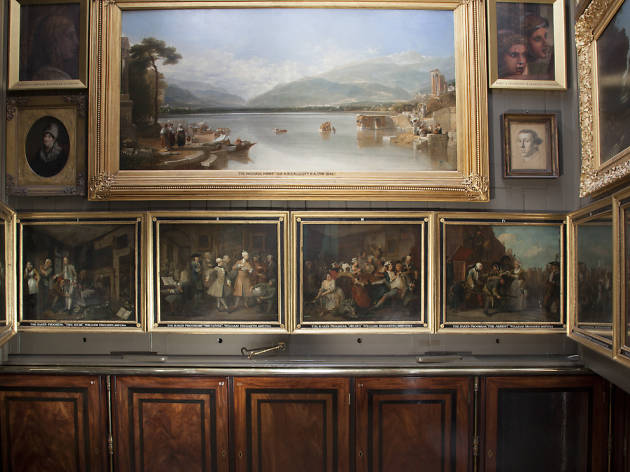 Like a proto-Dickens, Hogarth painted his narrative series ‘A Rake’s Progress’ to be reproduced in its thousands, capturing the public imagination. The story is a simple one – young man inherits fortune, young man pisses fortune up wall – but in Hogarth’s hands not necessarily a straightforwardly moral one. We, after all, are complicit in his downfall: we know what’s coming, and it ain’t good, but we’re looking forward to it. So Hogarth gives it both barrels. Tom Rakewell not only loses the money and the girl, he also loses his marbles. The final image of the rake reduced to a naked madman in Bedlam is a disturbing one. Fashionable ladies and gentlemen look at him for their amusement, but isn’t that what we’re doing? Hogarth wrong-foots his audience by reminding them that none of us is more than a few steps from perdition, so be careful who you mock. Buy the engravings, though, obviously. 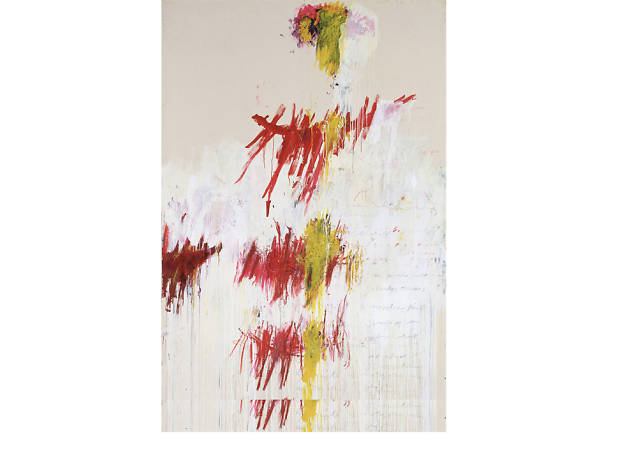 © Cy Twombly Foundation
WHEN? 1993
WHERE CAN I SEE IT? This painting is part of the Tate collection but currently not on display. CheckTate Modern or Tate Britain to see when it will next be on show.
I LIKE IT See also 'Cage 1-6'

A Europhilic exponent of 1950s American abstract expressionism, Cy Twombly instills this scraw-laden, four-part series with the best of his emotional language: mournfulness, romanticism, circularity, menace and desire; all with an exquisite palette. ‘April is the cruellest month,’ wrote TS Eliot, and the same is true of Twombly’s modern masterpiece (his violent, crimson-splayed ‘Primavera’ is the same season, at least). This is elemental graffiti, but of the most genteel variety.
Advertising 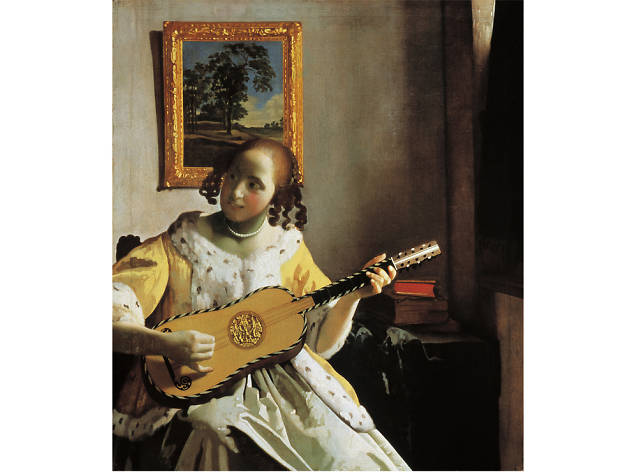 At first glance it might seem like a straightforward depiction of a young woman playing an instrument, but ‘The Guitar Player’ is a nuanced discourse on societal norms. Weaving practical and narrative design into seamless symbiosis, Vermeer deconstructs the idea that women are passive objects to be observed like a landscape. While not his most famous work, it exhibits a masterly portrayal of light. 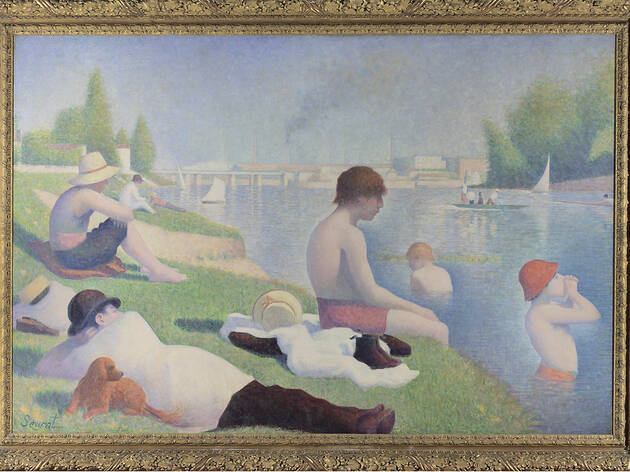 Georges Seurat took all that spontaneous impressionist daubing and applied a cool, scientist’s eye. ‘Bathers’ represents the very peak of nineteenth-century optical and colour theory committed to canvas; Seurat built forms out of contrasting dots of pure colour. And it’s surprisingly expressive – conjuring fluctuations of heat, smoke and the coolness of water. The style was dubbed pointillism (though Seurat thought of his style as divisionism and, perhaps confusingly, it was also termed ‘neo-impressionism’ by art critic Félix Fénéon). This is a radically modern scene – workers on their lunch break – made timeless, monumental.

Who is that boy calling out to? Speculation takes us across the Atlantic, to the Art Institute of Chicago and ‘A Sunday Afternoon on the Island of La Grande Jatte’ (1884), the scene Seurat painted on the other side of the Seine. We may have the marginally less famous painting in London: no one has written a musical about ‘Bathers’ (Stephen Sondheim’s ‘Sunday in the Park with George’ is inspired by ‘A Sunday Afternoon…’), nor has it featured in ‘Ferris Bueller’s Day Off’. Yet, while Chicago’s painting depicts the bourgeoisie with their pretentious pets (a monkey on a lead) lurking in the shadows, we have honest workers and righteous sunlight on our side.
Advertising 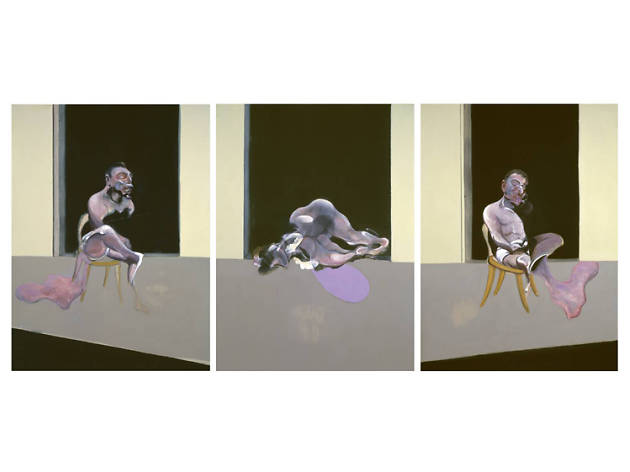 © Estate of Francis Bacon
WHEN? 1972
WHERE CAN I SEE IT? Tate Britain
I LIKE IT See also 'Three Studies for Figures at the Base of a Crucifixion'

After Bacon’s lover, George Dyer committed suicide, the Irish-born painter embarked on a series known as ‘The Black Triptychs’. In these three evocative paintings, the haunting impression Dyer’s death left on Bacon is all too apparent. The two male figures, Dyer on the left and Bacon on the right, are only partly present as they disappear into the black background. The anthropomorphic forms in the central panel are inspired by Edward Muybridge’s photographic studies of wrestlers and give the piece a sense of torment, a struggle between life and death. Its still contemplativeness represents loss at its most raw. 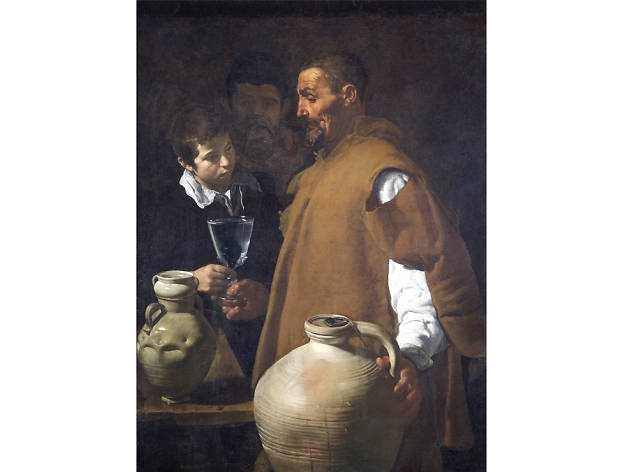 In this painting, Velázquez shows off his mastery at depicting different types of surface: sun-warmed earthenware, crystal-clear glass, dusty sackcloth. Yet it's his mastery of mood that is possibly even more astonishing, lending this exchange between impoverished street-hawker and gilded youth an almost ritualistic sense of solemnity.
See our top 10 paintings in London
Recommended