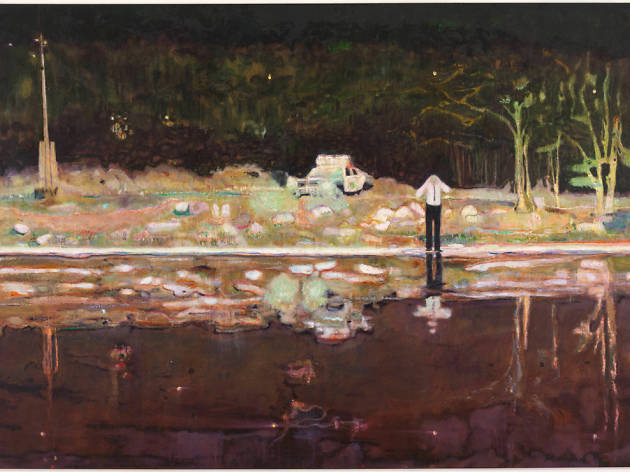 © Peter Doig
WHEN? 1998
WHERE CAN I SEE IT? This painting is part of the Tate collection but currently not on display. Check Tate Modern or Tate Britain to see when it will next be on show.
I LIKE IT See also 'Ski Jacket'

What’s happened here? Is the man calling out? Are his hands clasped to the side of his head in anguish? Has he lost someone, something, in that water? Is that why the cops are there? Is he the cop? It’s a wonderfully unsettling image from the Scottish-Canadian artist – atmospheric, dark, strained and confusing, but beautifully painted, with that weird horizontal composition splitting everything in two. Is Doig the finest contemporary painter? When he was producing works like this in the early 1990s, it was pretty hard to disagree. 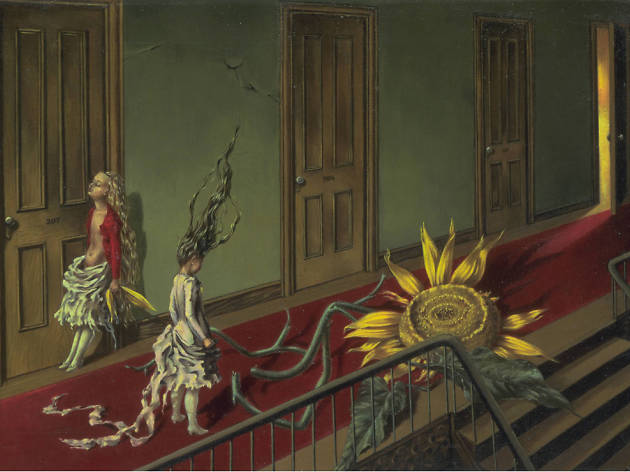 The American painter’s fertile imagination sprouts forth with this surrealist work depicting a sunflower intent on blocking a child’s path down a hotel hallway, and a life-size doll in a doorway that looks as though it’s had one too many. The scene – a bit Barton Fink meets Harry Potter – is a fine example of Tanning’s ability to include just the right amount of detail to make the impossible seem like an uncanny potentiality. She has described the work, done while she was living in Arizona, as a metaphor for all the struggles that youth have to face (one of these being wind machines ruffling one’s hair, it seems). Titled after Mozart’s famous piece of music, the mood is more Lynchian dream-logic than Austrian serenade.
Advertising 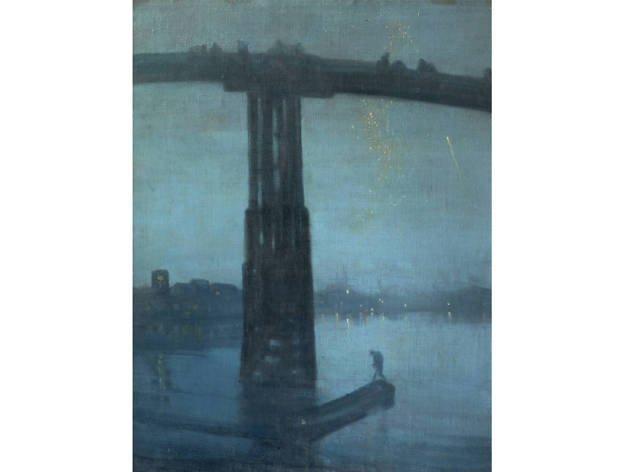 © Tate, London 2014
WHEN? 1872
WHERE CAN I SEE IT? This painting is part of the Tate collection but currently not on display. Check Tate Modern or Tate Britain to see when it will next be on show.
I LIKE IT See also 'Gassed'

In the mid-nineteenth century, just across the Channel, artists were pushing the boundaries of art as far as they could. The stark realism of Gustave Courbet and the powerful innovations of Edouard Manet set the radical tone that the impressionists would soon follow. It was the birth of modernism. Over here, we had James Abbott McNeill Whistler, whose atmospheric distillations of place remain icons of the period. Yes, he was American but the most important periods of the Massachusetts-born painter’s development were spent in our city – painting it, learning from it, loving it. His career peaked with his celebrated nocturnes – night views of bridges, water and fireworks, all dark greens and shadowy, shimmering shapes. Whistler sued John Ruskin for libel after the art critic accused him of ‘flinging a pot of paint in the public’s face’ with these works. He won the case but the legal costs bankrupted him. 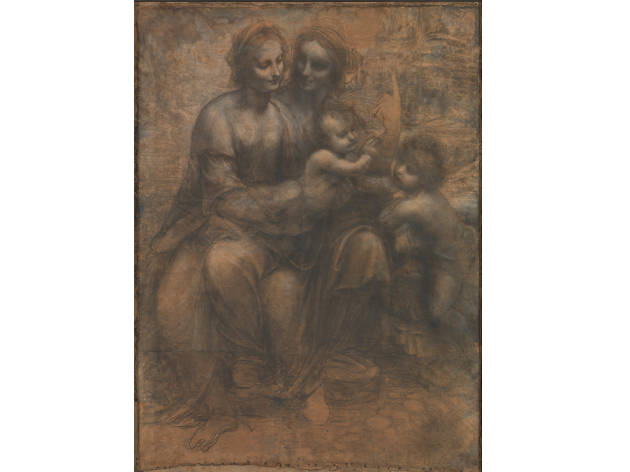 One of the great examples of chiaroscuro (the contrast between light and shadow), this charcoal painting’s gradual gradations render it seemingly three-dimensional. Known as a cartoon, a full-size preparatory study for a painting, it depicts the Virgin Mary, St Anne, St John the Baptist and Jesus with such distinction and finesse that they appear simultaneously divine and touchingly human.
Advertising 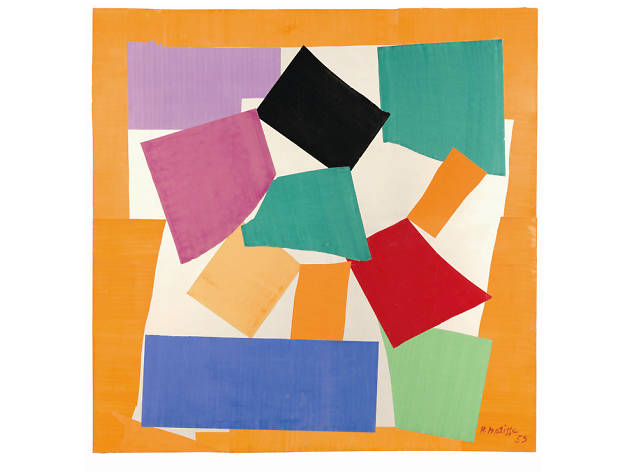 © Succession Henri Matisse/DACS 2014
WHEN? 1953
WHERE CAN I SEE IT? This painting is part of the Tate collection but currently not on display. Check Tate Modern or Tate Britain to see when it will next be on show.
I LIKE IT See also 'Weeping Woman'

Henri Matisse's paper cut-outs are the ultimate feelgood art, unique among the great works of the twentieth century in their ability to pop a smile on your face and put a bounce in your step. Yet works like the Tate’s iconic ‘The Snail’ don't exactly spring from a happy place. They were created during a period in which Matisse became embroiled in a bitter separation from his wife, was at times gravely ill and housebound in the South of France, while WWII ravaged the country. Often confined to his bed, he would set to work with long-bladed scissors on sheets of paper, painted in brilliant hues by his assistants, cutting with the dexterity of a master tailor to create forms that when pinned to the wall magically became rhythmic arrangements of flowers, leaves and nudes. ‘The Snail’ was made in the year before Matisse's death. Nearly three metres square, the composition is a loose spiral, based on a snail’s shell. Do we read it according to its ancient symbolism as a sun, or perhaps invest it with more new-age significance? Either way, it’s a work of miraculous beauty but also defiance – against illness, war and old age. 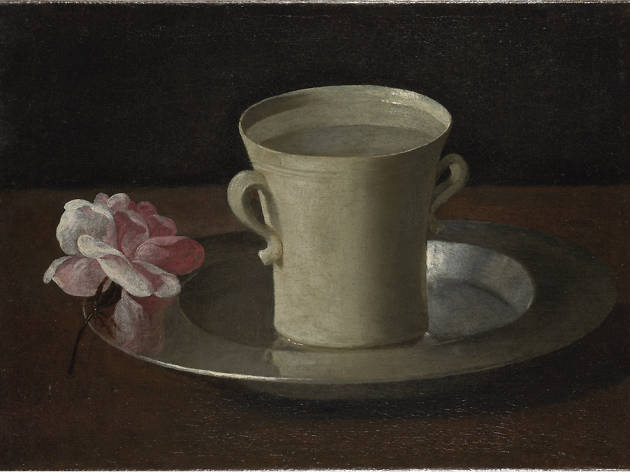 It’s hardly champagne and caviar, but the water and rose in Zurbarán’s quiet masterpiece look as luxurious as an oligarch’s breakfast (especially the cup, which would not be out of place at the Astier de Villatte concession in Liberty). The intentions of this painter from Seville were likely to have been less extravagant, however, as he received most of his commissions from religious orders. The water and rose that appear here and in another of his paintings are said to symbolise the Virgin Mary’s top-drawer qualities: purity, goodness and all that. Not usually one for still lifes, Zurbarán’s technique reveals a gentle vision and a light-touch approach to composition.
Advertising 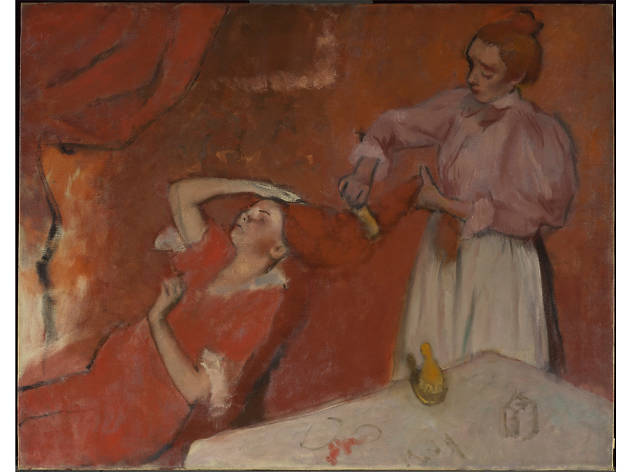 For heady, reddy eroticism, this Degas painting has it all. The Frenchman, known for his scenes of contemporary life at the ballet, opera, racecourse and café, also had a thing for ladies in their boudoir. Instead of composed, considered representations of women, he opted for a candid approach, capturing women in their toilette either bathing or having their hair combed. We might consider it ludicrous today, but combing your hair in public was not the done thing, so for Degas to return to this private moment repeatedly could be considered fairly scandalous. The scene is intensified by the tension between the two women and the dominance of red, in its various hues. Something so fleeting as having one’s hair combed no doubt raised the blood pressure of Parisian society. 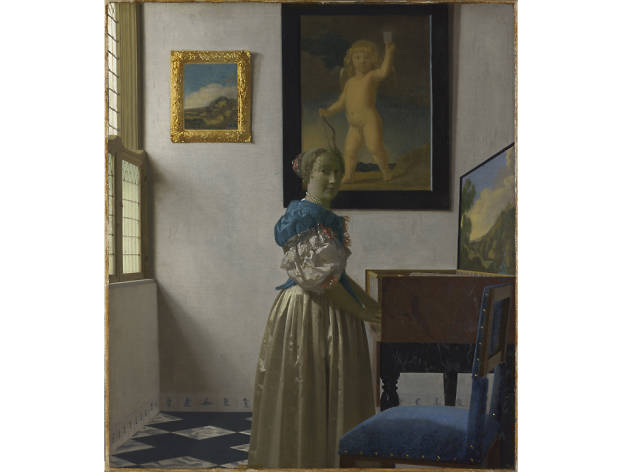 The quiet loveliness of this typically glowing Vermeer image of a girl and her instrument – expansive windows lighting her right cheek while a painted Delft landscape unrolls beyond her left – is saved from beauteous stultification by the cupid above her. His bow practically bruises her forehead, perhaps promising an end to harmony, of all kinds. This girl may be wealthy, genteel and for all we know, talented, but music in the Netherlands in the seventeenth century was also a symbol of transience, and love has created discord in more synchronised lives than this one.
Advertising 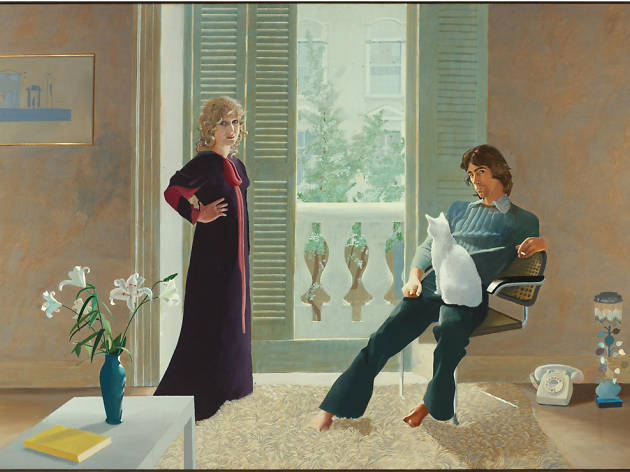 © David Hockney
WHEN? 1970
WHERE CAN I SEE IT? Tate Britain
I LIKE IT See also 'Melanie and me Swimming'

Ossie Clark, the British fashion designer who embodied Swinging ‘60s London, is shown slouched with his bare feet on a shag rug alongside his new wife, textile designer Celia Birtwell, in a Hellenic housecoat. It’s a scene of pure bohemian woke-up-late-after-another-dinner-party sumptuousness that adroitly captures time and place. Instead of the skulls and scrolls of Renaissance art, the symbols here are freshly cut flowers and a Portobello Road tassle lamp (immediacy, hippie domesticity) and the cigarette in Ossie’s paw (joie de vivre, death-drive). Of course everyone knows the cat is the real star of this enormous portrait by Britain’s most famous living painter, but the furball staring wistfully out the window is actually called Blanche – Hockney just preferred Percy, the name of Mr and Mrs’s other puss. And who can blame him? 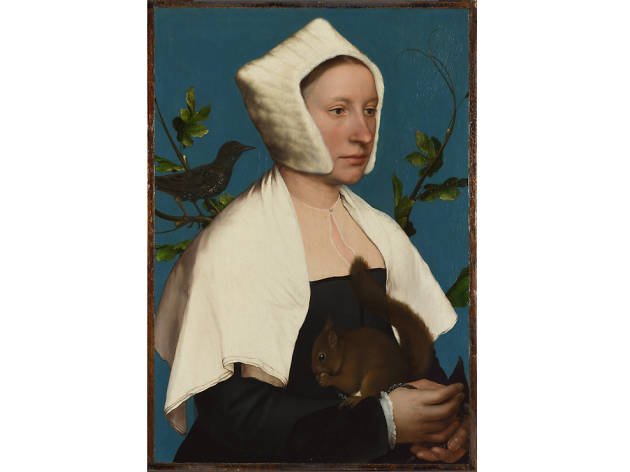 If you were going to have your portrait painted in sixteenth-century England, it had to be with your pet. But forget cats and dogs, we’re talking pet marmosets or squirrels. This early painting by King Henry VIII’s painter was probably done on Holbein’s first visit to England before he moved here permanently in 1532. Although the sitter’s identity is still hotly debated, it’s likely to be Lady Anne Lovell, whose family crest included a squirrel. Painted on a single oak panel, it’s hard to believe the painting is over 500 years old. It has all the classic Holbein attributes you’d want in a portrait: extraordinary use of colour (note her skin tones and the vivid background); the composition of half-turned torso to profile the face; and exceptional attention to his sitter’s attire – just look at the ermine cap and velvet edging of the bodice. It’s as contemporary a depiction of the Tudor court as you can get. And it’s sublime.
Count down 30-21
Recommended More from Christmas