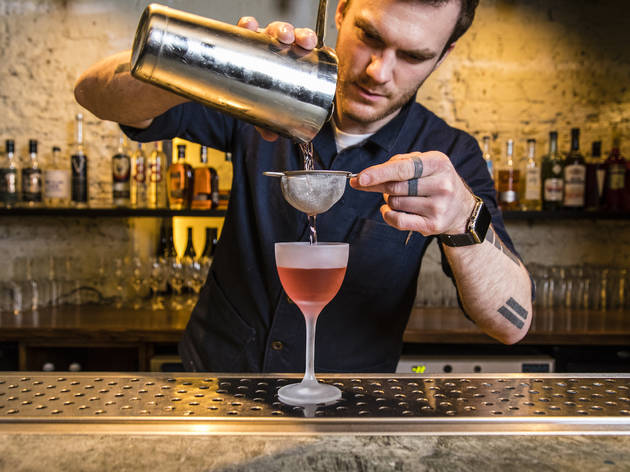 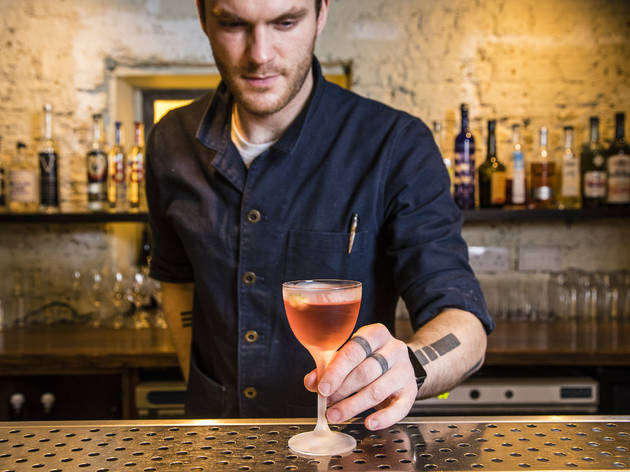 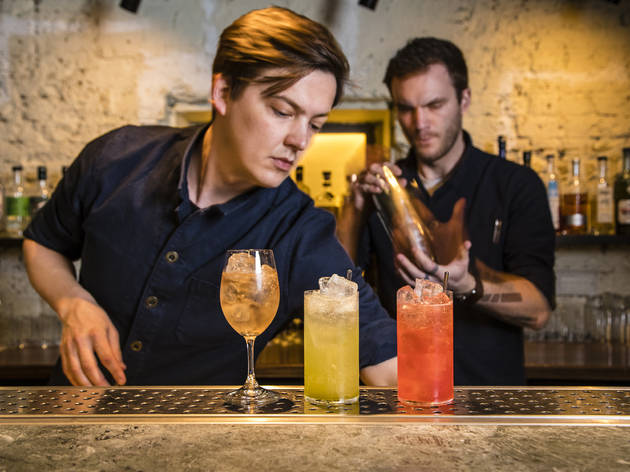 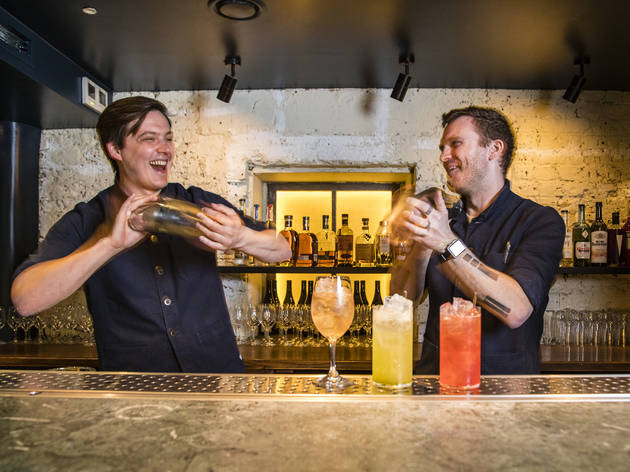 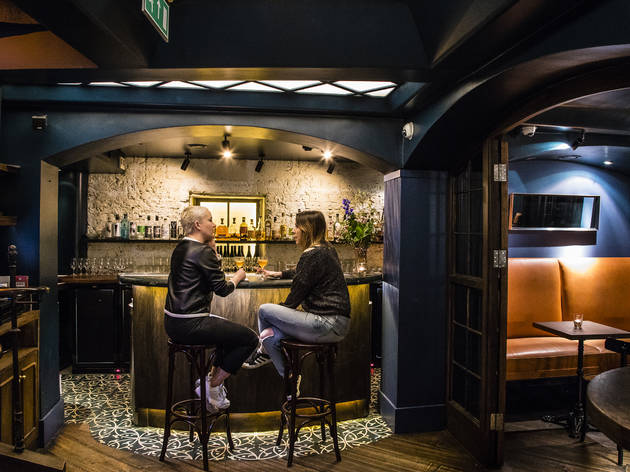 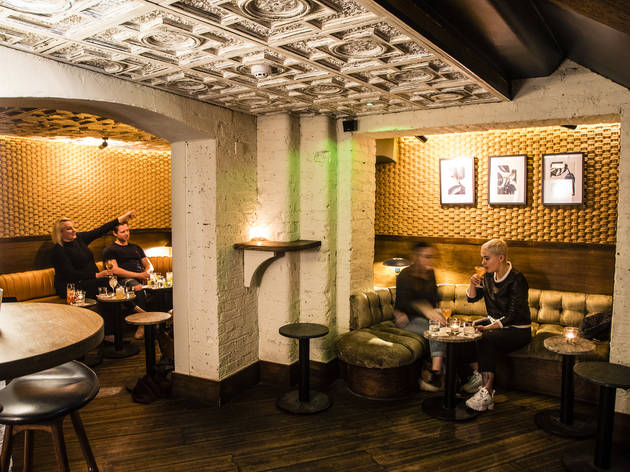 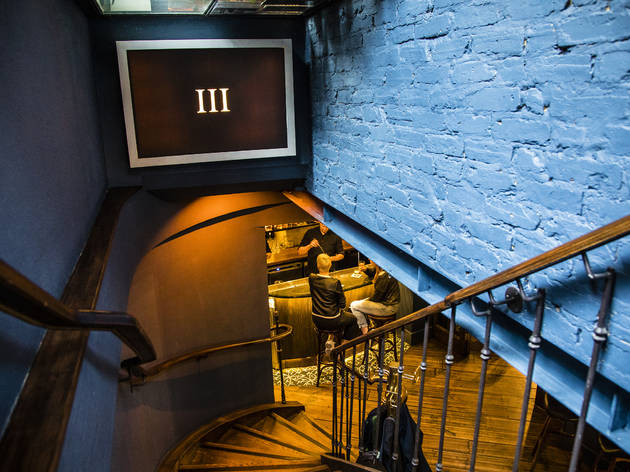 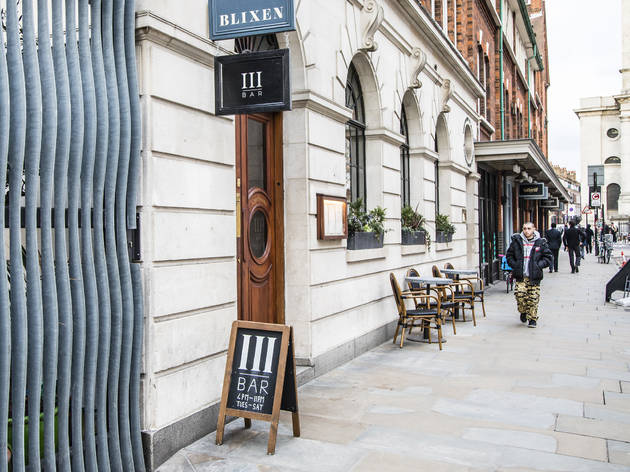 A subterranean cocktail bar in Spitalfields, the follow-up to Dalston’s Three Sheets.

Please note, the Venning Brothers are no longer involved with Bar Three, although the bar remains open. Time Out Editors, October 2019.

Three is the magic number. Or two, for Max and Noel Venning, the bartending brothers behind this Spitalfields bar and its sibling, Three Sheets in Dalston. Their second London venture is a seductive space that borrows plenty of the best bits from the first venture, yet feels like the dark yin to that light, bright spot’s yang. It’s tucked underneath Blixen restaurant – a collaboration with the restaurant’s owners and bar snacks are served from the kitchen upstairs – but has its own side entrance down a sweeping staircase and an identity very much shaped by the brothers Venning.

There’s a compact bar at the foot of the stairs as you enter, where smiling staff offered a wave between drink-mixing. It’s elegant, modern and minimal, with tall bar stools populating the first room and low tables for relaxed drinking in the second; that first space is brightened by white stone walls, the other is painted in smart bottle green and navy. French doors divide them and get flung open on busier nights to unveil the second space. Table service was warm and attentive, and our waitress gave enthusiastic recommendations and made us feel at ease when we were being indecisive. A couple of palms and shoots pop out and echo the greenery-decked restaurant up above, while a whopping convex mirror hangs opposite the bar, drawing focus back to the heart of the place.

Just as at Three Sheets, the cocktails are so very striking. At a time when we’re told those snowflakes are watching what they drink, the menu is right on the money: cocktails are either ‘free’, ‘light’, ‘medium’ or ‘full’, with three options to choose underneath each heading. (Alcohol-free drinks cost £6.50, all other cocktails are £9.50.) From the last section, a standout was the Whisky + Milk, a clarified, nutty and full-bodied bourbon cocktail whose flavour delightfully lingered. A Tequila Highball could convert any agave-hater: a clear and fizzing drink that tasted practically virtuous, with a light blend of green tea, honey and essential oils in the mix. And the Venning’s famed French 75 makes it on to the menu: it’s quite simply one of London’s best cocktails.

Each drink is served in a fuss-free way that belies all the sciencey, kitcheney stuff that has gone into making them – a bouquet of fresh flowers and blossom on the bar was occasionally snipped at for cute garnishes, but otherwise, expect drinks served straight-up, perfectly chilled and in elegant glassware. Bar snacks match this pared-back approach – plenty of robust, traditional flavours done well, from chorizo bites to fish croquetas and giant prawns in an oily, garlicky garnish.

Three Sheets is seen by many as a discerning drinker’s hangout, and some punters might find that tiny and achingly cool Kingland Road spot a touch intimidating. That doesn’t feel like the case at Bar Three, a more down-to-earth and accessible bar despite the fact that it’s bigger and glossier. There are lots of cute hidey holes and there’s a little more room to breathe. I loved it so much that I found myself descending the stairs for a second time just a week after my first trip. Neighbourhood hype had brought in more locals and the bar was abuzz – those doors popped back to accommodate the bustle. It felt like magic, pure and simple.