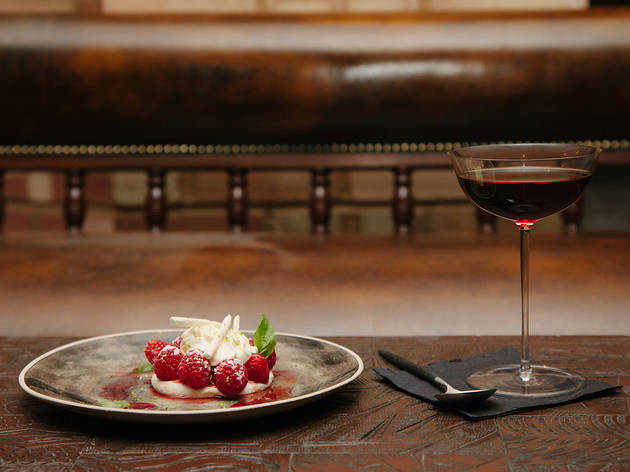 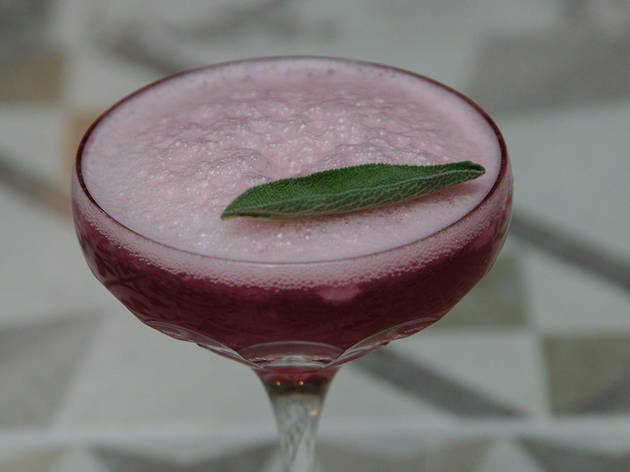 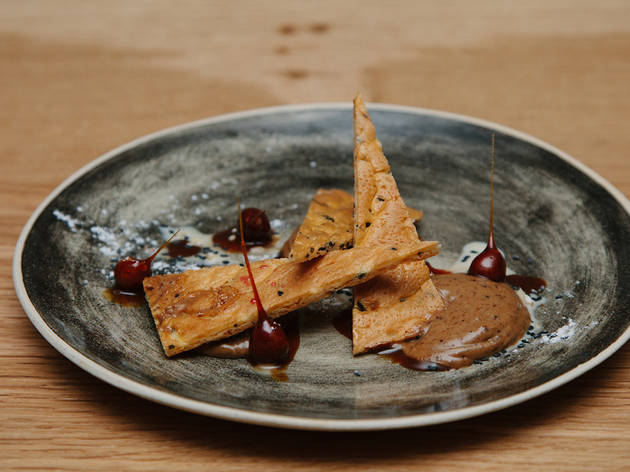 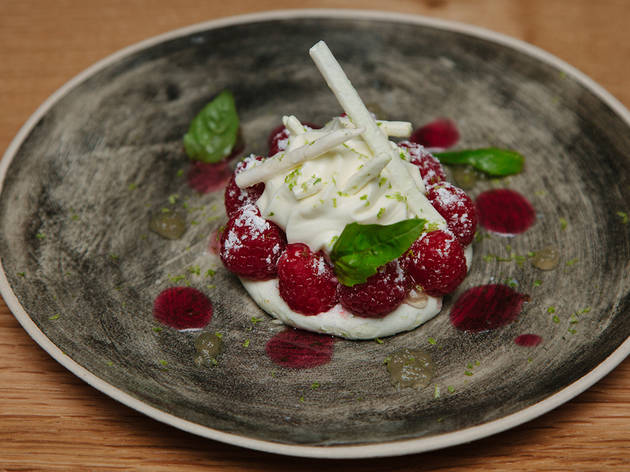 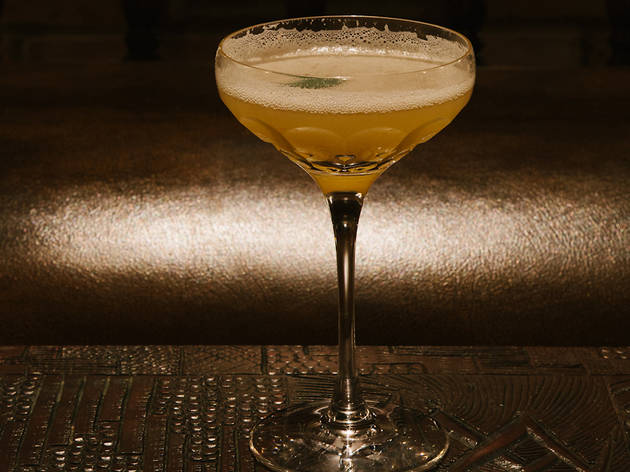 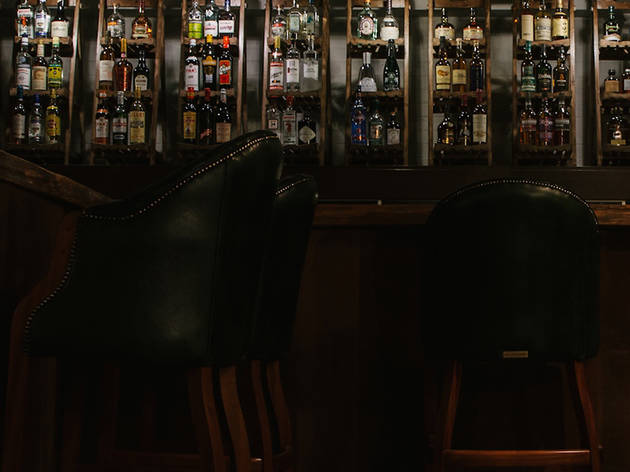 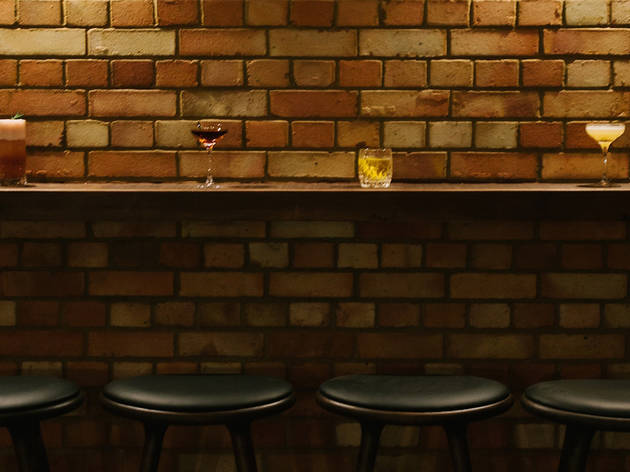 This new Soho nightspot offers a compact list of cocktails, the promise of desserts, and a rota of DJs throughout the week.

Poor old pud: always the bridesmaid, never the bride. But after years of being picked last, dessert’s finally getting a white wedding, as going out in the evening specifically for a sweet has become a bit of a ‘thing’.

It started innocently enough, with gelaterias and cafés staying open until late, for people-watching until the small hours. Then came the ‘dessert bars’ in pâtisseries and restaurants. Recently a dedicated pudding bar pop-up (called the Pudding Bar) set up shop in Soho.  And now we have this, a permanent ‘cocktail and dessert bar’.

Once home to The Player bar, Basement Sate still looks and feels like a low-key cocktail bar – but gives pudding equal billing.

Half the menu lists cocktails, the other, ambitious desserts. But while our £11 ‘chocolatine’ (a celebration of cocoa in all of its forms, from plain slivers and mousses to cakes and brownie bites), was outstanding, others were outlandish. The £8 ‘London-Brest’, a tenuous, deconstructed take on the Paris-Brest (choux pastry with a praline cream centre), was actually a messy, ill-judged jumble.

Cocktails were equally hit-and-miss: our l’Entrée des Artistes, a milk-based rum and sherry cocktail infused with salted caramel and bitter notes of coffee (£11), was exceptional. But when asked to create a sour-style mocktail (£7), the handsome bartender simply omitted the booze from an existing drink, thereby removing its balance and rendering it sickly sweet.

Basement Sate’s execution doesn’t live up to the new-trend hype, so the honeymoon period for this pudding bar might, we fear, be over all too soon.

So I popped in here with a friend just before closing time so sadly I didn't get to sample their desserts I'd heard so much about.... However, the drinks I had there that night were good.

I ordered an old fashioned and even though somehow thr guy didn't make it from scratch it was still pretty damn delicious!

The lighting is very dim here so don't expect to be able to make googley eyes at your company but you'll have great cocktails so it shouldn't really matter haha.

We are in dire need of more dessert places in London, especially if you’re trying to have an alcohol free day here and there. But a dessert place with matching cocktails? Now you’re making it difficult. Basement Sate matches their desserts with some pretty quirky cocktails (beetroot cocktail anyone?) and offer a range of delectable sweets appropriate for anyone on the sweet tooth spectrum. The matcha dessert was okay - I prefer strong matcha flavour so it was a little mild for my tastes. The beetroot cocktail was stand out - it was strangely moreish and rather confusing, but tasty. Basement Sate has got attentive service, live music, dim lighting, chesterfield couches dotted about and a few knocks and crannies for those on date night. I’d be interested to try the rest of the menu.

Tip: they offer cocktail masterclasses and on some days have live music.

Yep the photo I took of this place is...erm...not very clear soooo let's talk about it. It is hidden away down a side street and is a late night cocktail bar. It is true as everyone else says it isn't huge but it is fit for purpose and is dark/moody and fit for purpose. One to note for future ref!

You can find Basement Sate via a door in a wall on the cobblestoned streets of Soho, so you’ll have to keep your eyes peeled to find it. Set underground this bar has a chilled, laid back, after work drinks vibe. You can reserve an area for larger groups and choose from various booths and seating areas. This isn’t the flashiest of bars nor the biggest but is great if you want to nip out somewhere for a few easy drinks in a relaxed atmosphere.

This is a really cool hidden away bar that specialises in desserts and cocktails. It's quite small with some seating. Cool decor and good music. The cocktails and desserts are delicious! A great spot for date night or a catch up with friends.

Cocktails and desserts = perfect combination. Basement Sate is an ultra cool bar styling its self on a prohibition era and it just works. Recommend booking as we has a brilliant table and couch which was perfect for second date, and yes, he got a third date after pulling that out of the bag 😝🍸🍮

Hidden gem in Soho! very easy to walk past but if you find it you will really enjoy your time there. The staff is friendly and create a low key atmosphere. Cocktails and desserts were amazing. What I love the most about this place is the music... Incredible! For true music lovers. I highly recommend this place

What a lovely place! Hidden bar: unmarked doorway, down the stairs, through an inconspicuous door to a wonderful underground bar. Nicely decorated – feels like relaxing in a friends living room – and the staff are attentive. Only serves a dream combination of dessert and cocktails but what’s not to like? Desserts are superb. Well thought out and made to a very high standard. Reminiscent of a Michelin restaurant. Great concept done very well. Will return.

I wouldn't recommend this for people that are looking for a crazy night out with loud music and dancing. But if you are looking to escape the buzzing crowds of Soho and have a sit down somewhere quiet and enjoy a nice cocktail- this is the place. Perfect for a date night- get one of the booths if you want more privacy. Great for a catch up with friends where conversation is more important than the crowd or music. The vibe is always chill, so you will always get to relax when you are here. And the cocktails are quite delicious!

This is a good bar to go to after dinner if a date is going well. I like the deserts here and the cocktails are really well crafted. The only negative I find is that the table service can be really slow because there are only two bartenders for the whole place and when it is busy it might take some time for your order to be fulfilled.

This place is really hidden away. On a street in between two retail shops is a red door, no signs, no bouncer, no nothing! But boy do you miss out if you walk by!

It's all about dessert and cocktails - fancy, tasty dessert and cocktails and they pull it off very well.
Down the stairs into a fairly dark bar with bar stools, comfy sofas with low tables and some private booths you are greeted by staff who seat you. I've never been on a weekend so it has always been fairly quiet and we have never had a problem with picking our own seats.
The menu is a combination of about 10 cocktails and 10 desserts (beer, wine and fizzy also available) which change every few months. I went about a year ago and had the most amazing puddings and drinks but when I went last week everything on the menu was completely different. They also said they were prepping for another change of a few puds and cocktails in the weeks to come so I'll probably have to go again!
Both my bf and I had had a pretty big meal so were in no rush for dessert so I took the time to decide (I was toying between 3). I had decided on my cocktail and bf was going to go for wine as doesn't like cocktails however waiter made a few recommendations of cocktails that went better with the puddings I was thinking about getting, also taking the time to explain why (sweetness, bitterness, sour combos). So in the end I just went with the waiters recommendations and my bf, who is a chocolate fiend, went for the only chocolate option.
Cocktails range from £8-£12 and all desserts are £6-£8 so it isn't cheap but only a little more expensive than a dessert in a chain restaurants. The service, presentation and quality make it well worth it!
To give you a taster my bf had The Kinder Surprise; brownie, milk chocolate & tonka whipped cream,
caramelised hazelnuts, praline foam, caramelia pearls, which was amazing. We had to wait 20 minutes as the chocolate shells that are made in house were still setting but again this was fine. I had Break an Egg; lime & passion fruit curd, coconut mousse & crumble, passion fruit jelly, coconut shave, which was so fresh and went well with my cocktail 'still workinonit; vodka, moscato s'asti syrup, cucumber, yellow chartreuse' which was also very refreshing. Highly recommend going especially for a special occasion or with someone who loves desserts and cocktails!

Mixed feelings about the place. The deco is nice, staff were quite friendly, deserts are good. I know it's supposed to have a DJ etc but I found the music too loud for any kind of conversation involving more than 2 people. Oh and they don't serve coffee.

A good bar, with good drinks, but overpriced. If you host a party there, please make sure to keep all communications and keep a regular eye on the bar bills and spend. They require a minimum spend, then do not keep you up to date until the end, when you may get left with a huge bill. A lax attitude to the tab, alongside a lack of contracts can cause loud conversations later on and paying a vast amount of money. Be aware.

This place is the absolutely perfect spot to go after dinner if a date has gone well!  Hidden in Soho, your date will be impressed when you lead them down an unmarked stairway on Broadwick St, to end the night on a cocktail and pudding fuelled high!  Full details and lots of photos on my blog here: http://wp.me/p4nrrM-QS

- Nina
Have You Heard Of It? London bar & restaurant recommendations | HYHOI.com

The first thing I noticed about Basement Sate was the great, relaxed atmosphere and stylish furniture. My friend and I both commented how we felt like we were in a beautiful living room, which was very relaxing! The Beet Me Up cocktail I ordered was delicious, with just the right amount of ginger. The parfait cassis which accompanied my cocktail had a great mixture of textures and lovely fruity kick. I'd definitely recommend this bar for an after dinner sweet treat or post work sugar hit.