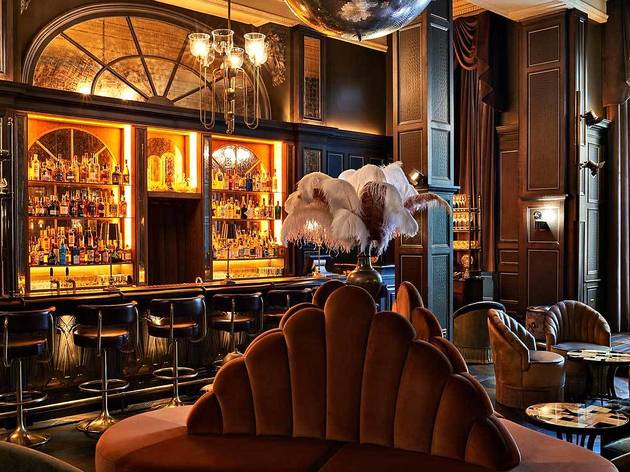 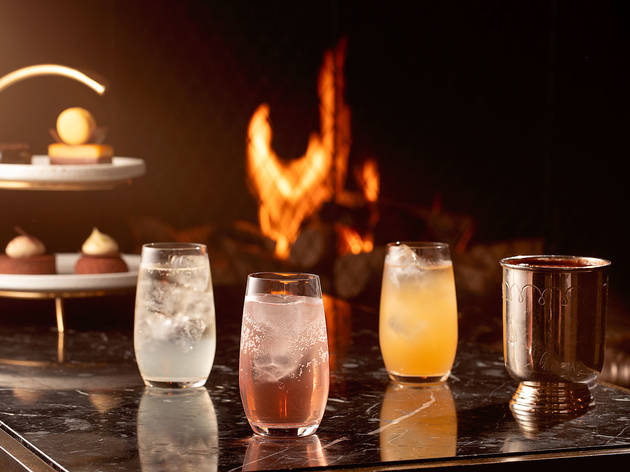 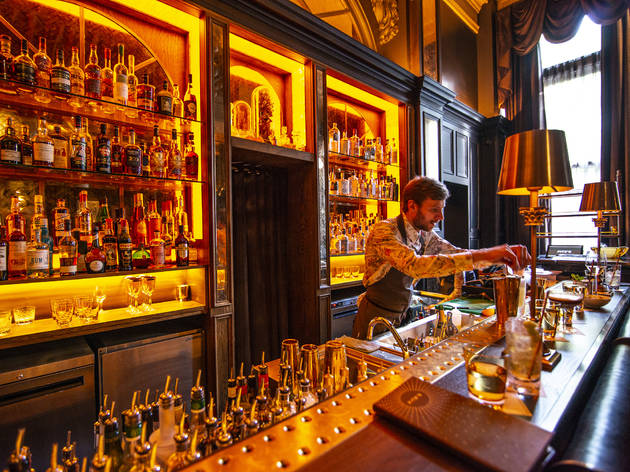 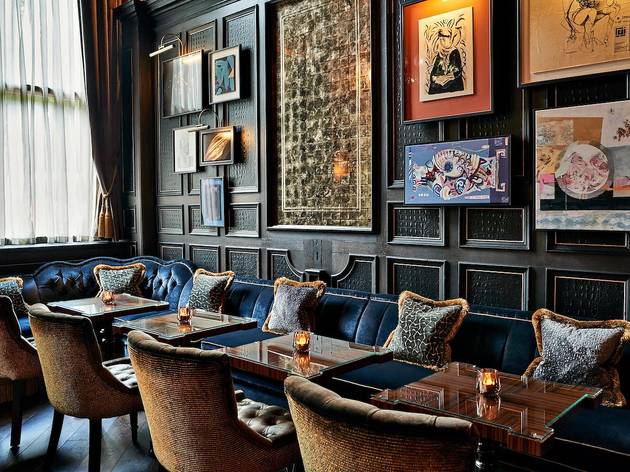 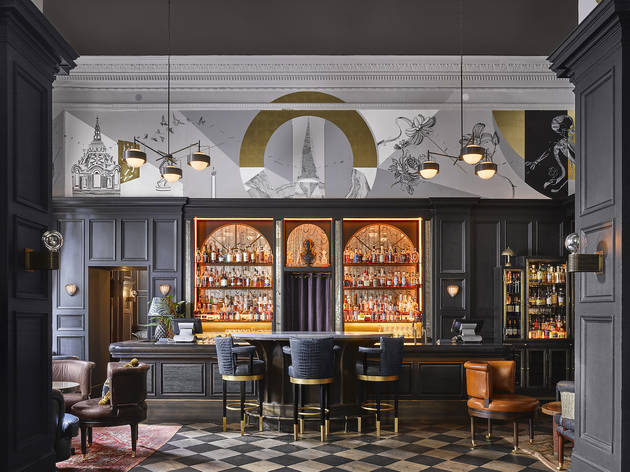 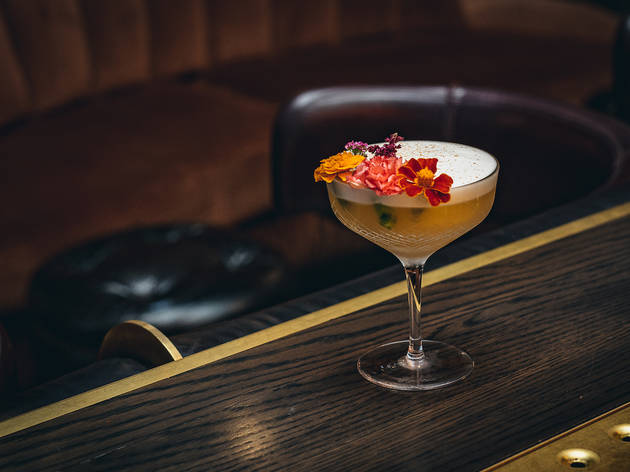 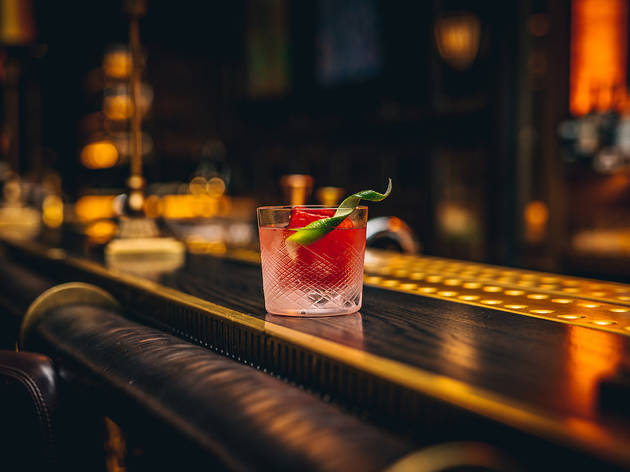 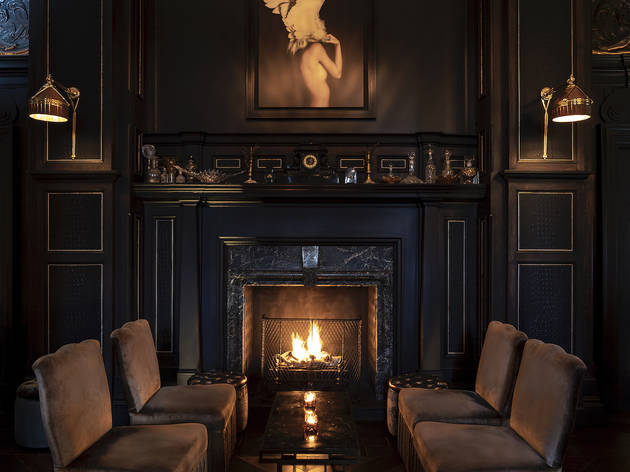 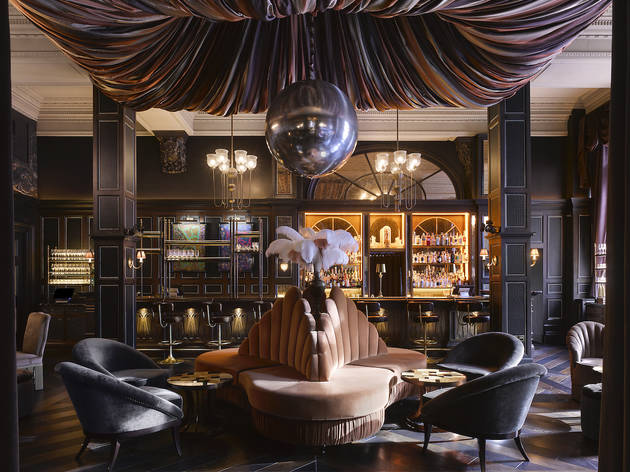 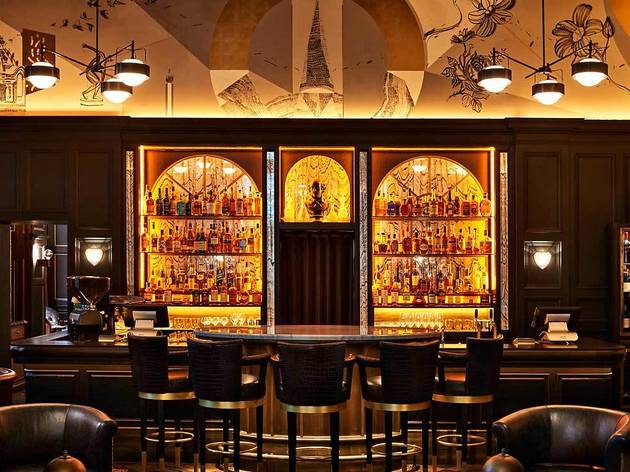 A sparkly hotel bar with a Studio-54-meets-West-Egg vibe.

If Rick James and Jay Gatsby got together to throw a bash, I reckon it would look like Fitz’s Bar. Jazz Age plumage fluffs up from behind chairs while a giant glitter ball hangs from above; the back bar’s arches hint at art deco elegance while bright modern art punctuates the walls; and music drifts from up-tempo funk to mellow jazz.

Fitz’s sits inside the Kimpton Fitzroy London, just on the corner of Russell Square. This hotel comes from a UK group with prestige, and you sense it from the marble-heavy lobby leading into this disco decadence. Staff in floral print were accommodating from the get-go, showing off their new home as we entered and offering suggestions on where to take our night when we came to settle up. They promptly poured water and served Twiglets on the side, a fittingly retro touch.

Snacks from the menu are well worth your attention, too – from oozing bone-marrow croquettes dressed with capers to salty hasselback potatoes topped with sour cream and caviar. Gatsby would approve. The cocktail menu is filled with illustrations and word clouds to help you figure out flavours. A fizz-heavy Spy Princess (£17) was served in a coupe with a splay of pretty petals on its frothy top. Veer from champagne cocktails and you get a more affordable hotel bar experience – £14 will get you a quirky and sublime cucumber-flavoured daiquiri or a Vesca Negroni, the classic drink lifted with coconut and rosehip. The team hails from London bars Milk & Honey and Callooh Callay – and it shows.

We later discovered a music-free room complete with nooks hiding behind the bar, with a more relaxed vibe fit for intimate meetings. Back in the main room, a DJ who looked the spitting image of George Michael arrived as we were leaving – we were pretty gutted to be missing that treat. But friendly staff, dazzling decor and all that deliciousness convinced me I’d be returning soon for another spin of that mirror ball.

Fitz’s Bar says
Fitz’s comes into its own at night with an air of illicit pleasure, whether guests are catching up on gossip, mixing with movers and shakers, or letting their hair down into the small hours.

Named after the architect, Charles Fitzroy Doll, Fitz’s is as fun as it is timeless, with cocktails that pay tribute to the free spirits of Bloomsbury’s past and present.

We also serve wine, beer, and spirits, as well as bar snacks, which include our signature Hasselback potatoes with sour cream and Exmoor caviar.