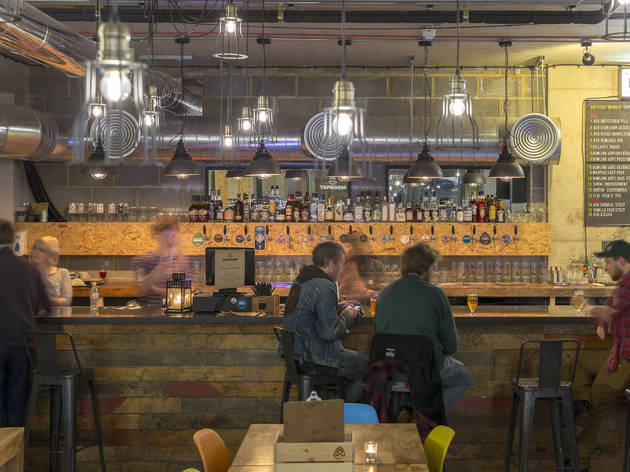 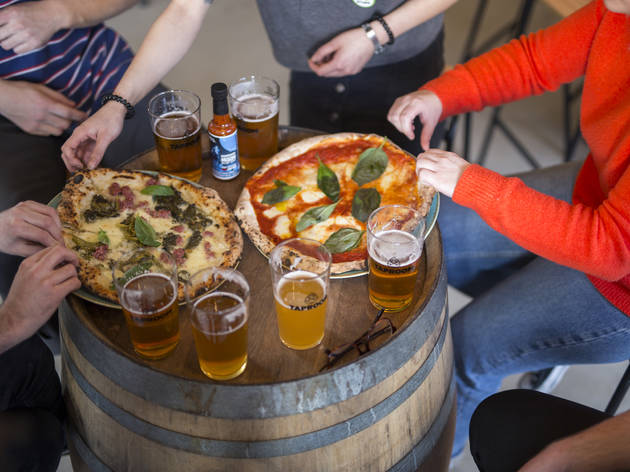 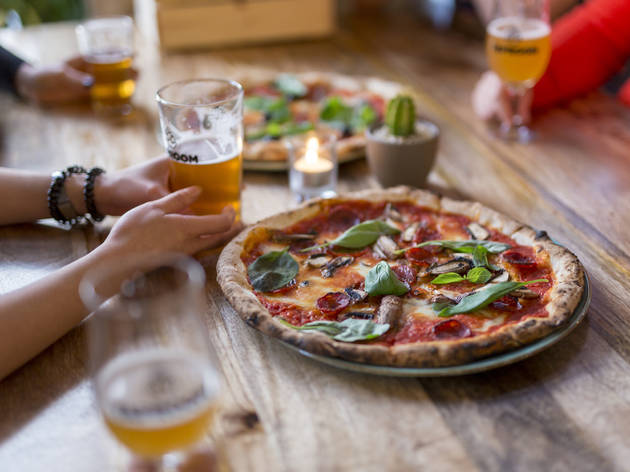 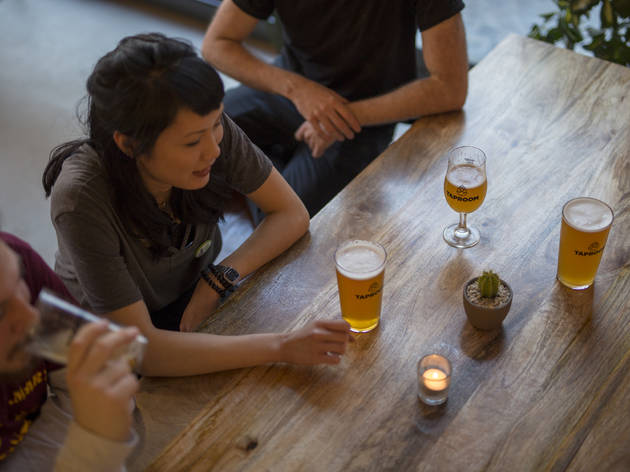 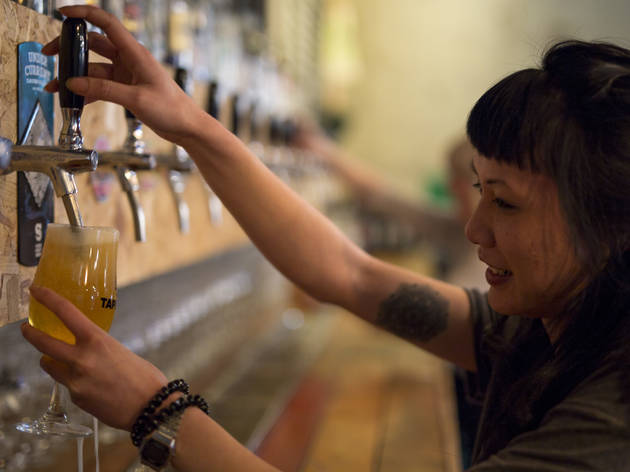 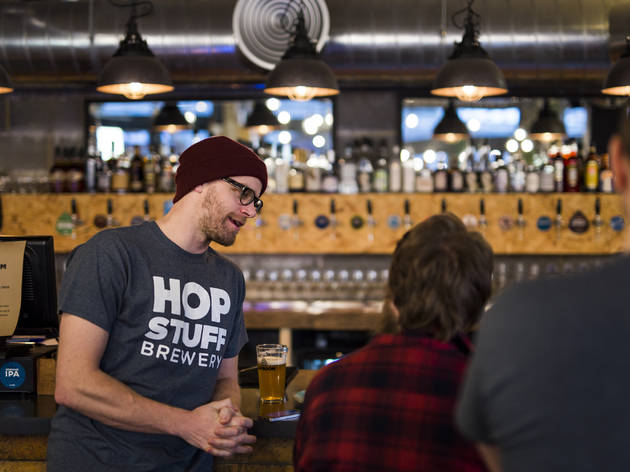 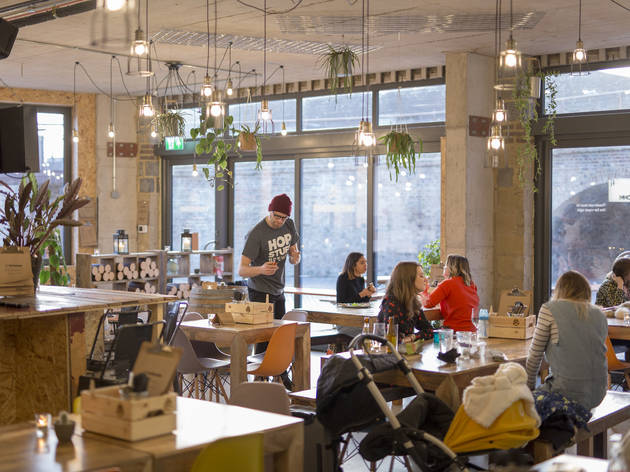 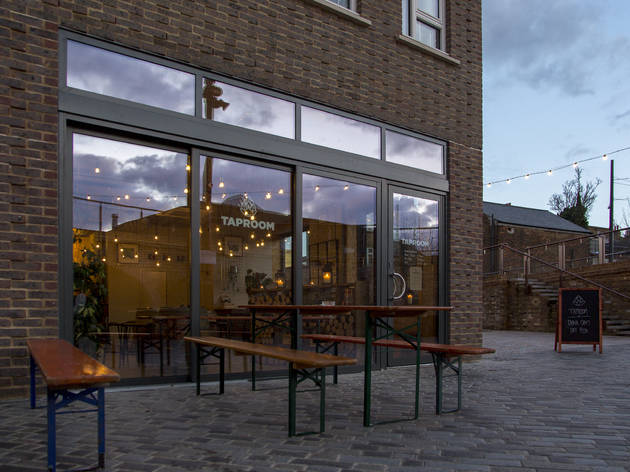 It’s easy to forget you’re in south-east London when sitting in the warm glow of this laidback boozer. Full of twinkling lights, reclaimed wine barrel tables, and saucy smells from a little domed pizza oven, the vibe is more Continental than cockney at Taproom SE8. It’s one of many bars and eateries huddled in Deptford Market Yard – a spot that’s quickly making a name for itself thanks to quirky joints like Little Nan’s Bar and weekly food market Deptford Bites. And now this, Hop Stuff Brewery’s second taproom.

Hop Stuff was set up in 2013 by husband-and-wife team James and Emma Yeomans, who quit their jobs in the City for life in the yeast lane. The pair set up a crowdfunding campaign to open their Woolwich brewery and original taproom, which has become a local favourite – and the SE8 incarnation seems to be stealing hearts, too. Hop Stuff prides itself on selling sessionable and accessible craft beer rather than pandering to plaid-shirted stereotypes.

It was a gloriously hot Saturday evening when we visited, so we nabbed a spot at one of the benches outside. Inside, it’s refreshingly cool, a room with all the trappings of a new neighbourhood bar – hanging lights, concrete floors, plywood surfaces – but with enough character to make it feel homely rather than soullessly slick.

A blackboard by the bar lists Hop Stuff’s own IPAs and an impressive selection of guest kegs from much-loved UK breweries – like Lost & Found and Wild Beer Co – as well as Deptford’s Villages and Hackney’s Five Points. We opted for a sweet yet tart glass of Mad Hatter’s grapefruit sour and a lip-smackingly citrussy Siren White Tips IPA, recommended by the chatty bar staff. We lapped it up with a sourdough margherita, which came to our table golden-crusted and perfectly seasoned.

So hop to Hop Stuff if you’re after an easygoing local that’s serious about its beer and what you soak it up with. You can leave the plaid shirt at home.

Such a great local pub. Simple and minimalist decor with exposed brick, lighting and wires. They have something for everyone, even if you're not a beer drinker they have cocktails and wine! If you're vegan they have you sorted too with vegan pizza options. My husband and I would definitely go back and can't wait to sample more tap beers.

For me this is a pretty welcome addition to Deptford Yard, not least of all because it's a bit chill. You can just pop in for a quick drink, like it's your local pub, and it's no big deal. I don't drink beers but my partner liked the selection, and both of us liked the vibe of the place. Will definitely be back!

Cool, modern bar and pizza place with a nice selection of drinks, I didn't try the pizza but it looked and smelt delicious. I came on a Monday night and it was half full, with a chilled atmosphere.

Cool and cozy atmosphere and an incredible smell of sourdough pizzas as soon as you walk in! Very nice selection of beers (tap and bottled) and a few decent wines as well, the drinks menu has something for everyone. Their sourdough pizzas look delicious and taste very good too - such a great combination of toppings! My go-to is the asparagus pizza - asparagus, porcini mushroom, lemon zest, red pesto base, mozzarella. It's delicious although one thing to note is that the pizza dough gets very chewy, almost rubbery a few moments after it arrives - so right after it's temperature drops just a little bit. So eat it hot and you will love it but it's such a shame it changes completely after a few minutes, especially as it could have been so close to a perfect pizza dough taste wise!