The Barbican Centre lures fans of serious culture into a labyrinthine arts complex, part of a vast concrete estate that also includes 2,000 highly coveted flats and innumerable concrete walkways. It's a prime example of brutalist architecture, softened a little by time and some rectangular ponds housing friendly resident ducks.

The focus is on world-class arts programming, taking in pretty much every imaginable genre. At the core of the music roster, performing 90 concerts a year, is the London Symphony Orchestra (LSO), which revels in the immaculately tuned acoustics of the Barbican's concert hall. The art gallery on the third floor stages exhibitions on design, architecture and pop culture, while on the ground floor, the Curve is a free exhibition space for specially commissioned works and contemporary art. The Royal Shakespeare Company stages its London seasons here, alongside the annual BITE programme (Barbican International Theatre Events), which cherry-picks exciting and eclectic theatre companies from around the globe. There's a similarly international offering of ballet and contemporary dance shows. And there's also a cinema, with a sophisticated programme that puts on regular film festivals based around farflung countries or undersung directors.

As if that wasn't enough, the Barbican Centre is also home to three restaurants, a public library, some practice pianos, and even a large, succulent-filled conservatory. This cultural smorgasbord is all funded and managed by City of London Corporation, which sends some of the finance industry's considerable profits its way. It's been in operation since 1982; its uncompromising brutalist aesthetic and sometimes hard-to-navigate, multi-level structure was initially controversial, but it's getting increasingly popular with architecture fans and instagrammers alike. 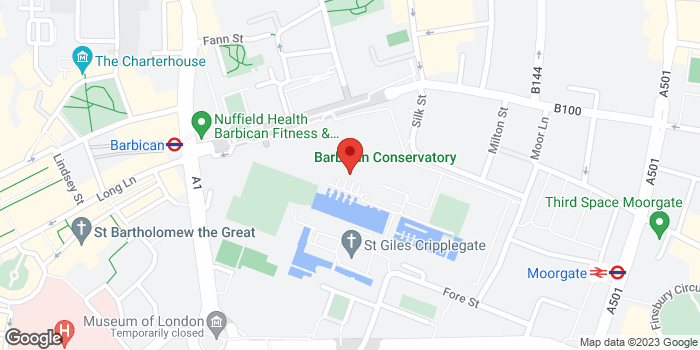 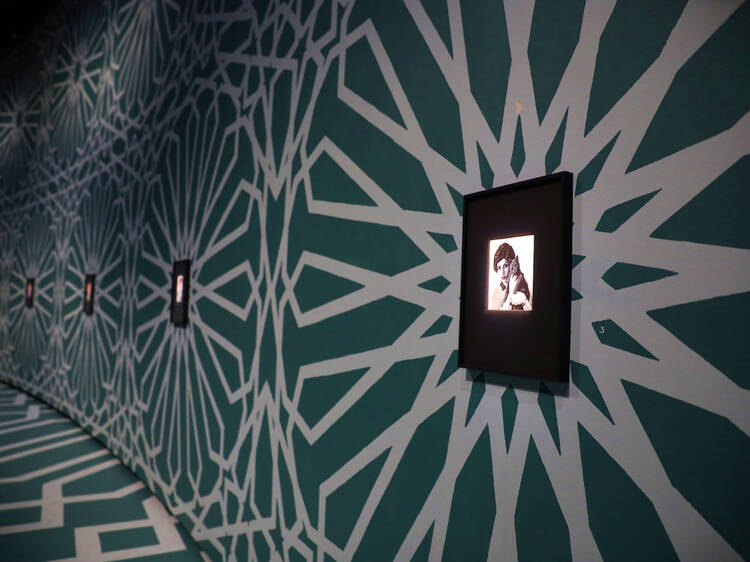 The Barbican Curve is full of ghosts, the spectres of bold, creative, amazing women from pre-revolution Iran, captured on fragile vellum in painstaking detail by Soheila Sokhanvari. These 28 cultural figures worked, created, lived and loved with a freedom that was taken away with the 1979 revolution, and still hasn’t been won back.  Sokhanvari’s own family emigrated from Iran when she was a kid, so this show functions as a love letter to that country’s past, and a celebration of lost culture. The paintings are tiny and bursting with colour and detail. Pouri Banayi stands with purple hair against a glittering night sky, actress Faranak Mirgahari points a revolver like a Wild West cowboy, Kobra Saeedi languidly smokes a ciggie. Each painting is a collision of Western fashion, 1970s interior decor and beautiful Iranian traditional aesthetics.  Syrupy, string-drenched pop songs by Googoosh and Ramesh flow through the space, the walls are covered in Islamic geometric patterns, there are glittering mirrored sculptures. It’s all seductive, psychedelic, smoke-choked nightclub vibes, freedom and dancing in the face of imminent oppression.  Even though the geometric patterns that swirl across the room are dizzying, you don’t end up in hypnotised delirium but locked instead in quiet, sad, mystical contemplation. This isn’t just a place of worship and celebration, it’s a mausoleum. As Iranian women protest once again for their rights, you just hope there’ll be more to celebrate in the fu 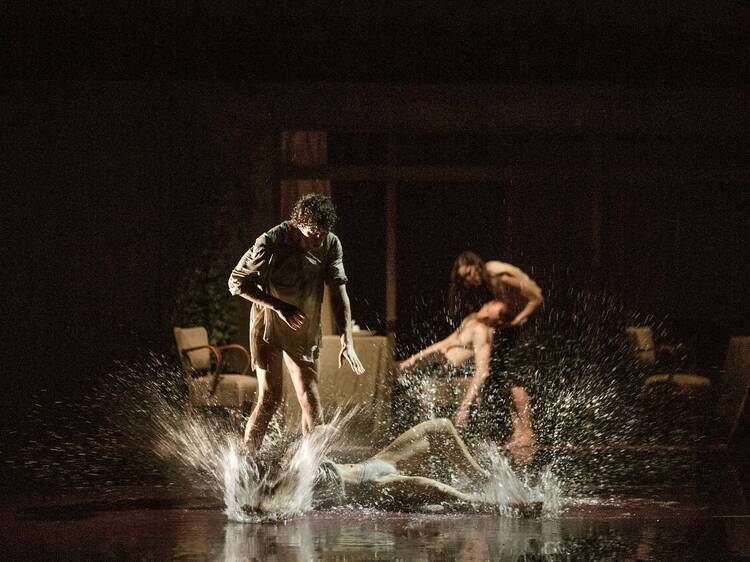 Triptych (The Missing Door, The Lost Room and The Hidden Floor)

Probably the totemic international theatre company of the latter years of the London International Mime Festival, Belgium physical theatre troupe Peeping Tom return for its final edition with ‘Triptych’, a trio of cryptic short linked pieces. ‘The Missing Room’ is set in a world where doors won’t open; ‘The Lost Room’ is set on a mysterious ship; ‘The Hidden Floor’ brings things to a close in an abandoned watery restaurant. 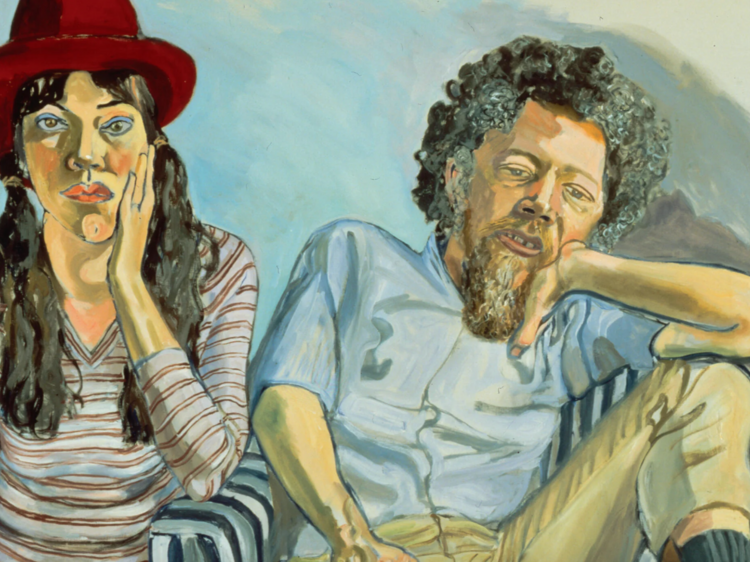 Alice Neel: Hot Off The Griddle

Alice Neel painted the world from her New York apartment. In countless portraits, she captured the people around her, the artists and musicians, the political rebels, the poets, the lovers, and everyone else too. This show will look at her political life, and how she was monitored by the FBI for decades. 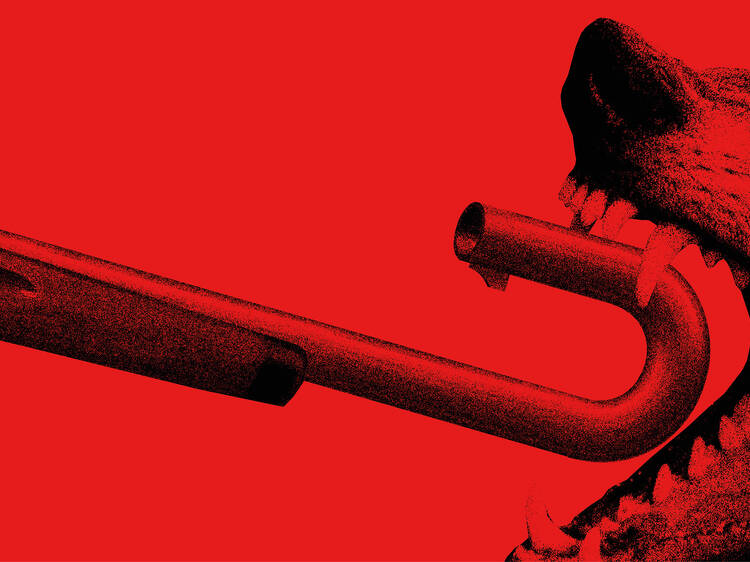 Drive Your Plow Over the Bones of the Dead

Simon McBurney’s legendary theatre company Complicite returns with its first major theatre show since its mind-blowing ‘The Encounter’. ‘Drive Your Plow Over the Bones of the Dead’ is a brand new stage version of Nobel Prize-winning Polish writer Olga Tokarczuk’s singular novel, a powerful and compelling mix of noir thriller and righteous eco-manifesto. It’s in no way an easy proposition to bring to the stage – which is kind of the exact point of Complicite. Kathryn Hunter leads the cast – presumably as protagonist Janina Duszejko, an old woman who believes that the local wildlife is rising up and killing hunters. She’ll be joined by Thomas Arnold, Johannes Flaschberger, Amanda Hadingue, Kiren Kebaili-Dwyer, Weronika Maria, Tim McMullan, César Sarachu, Sophie Steer and Alexander Uzoka.