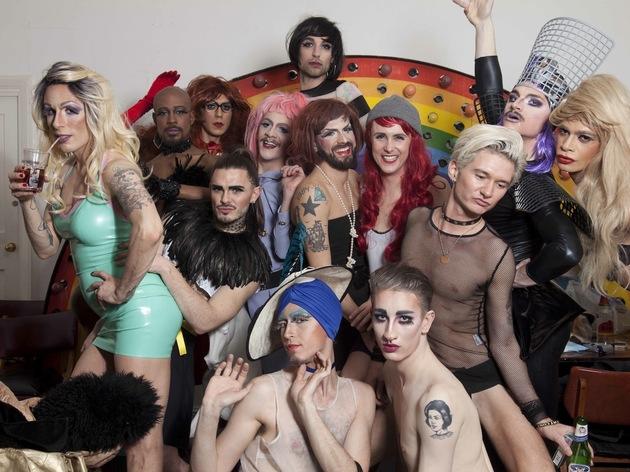 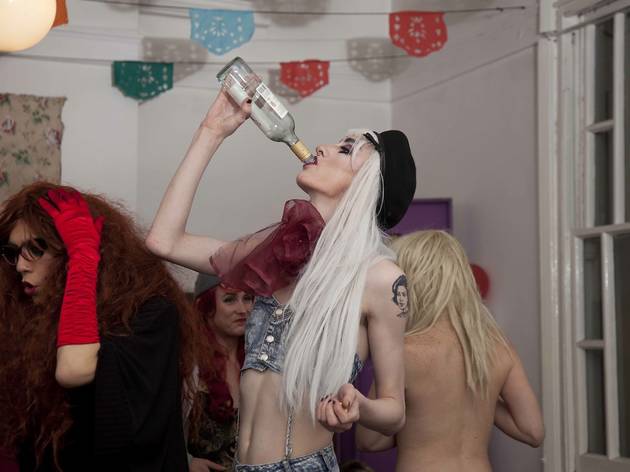 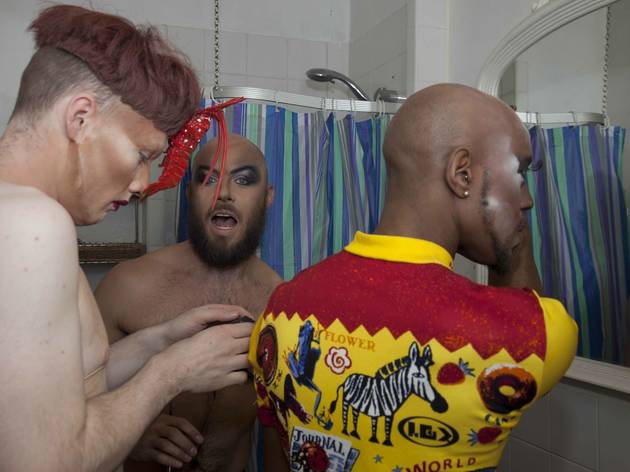 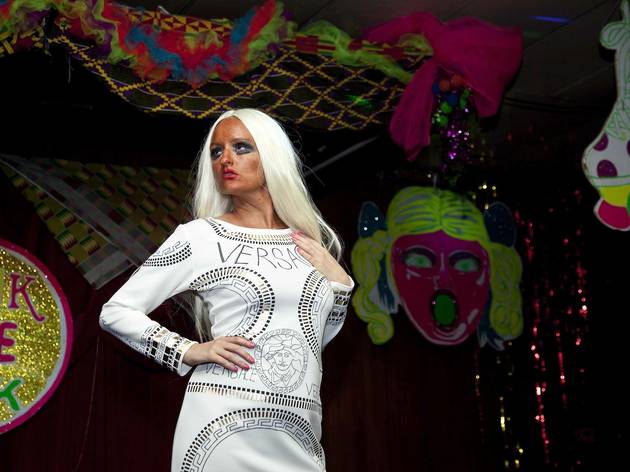 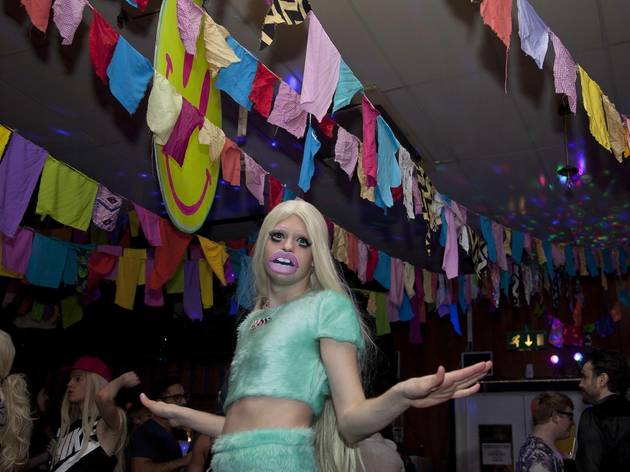 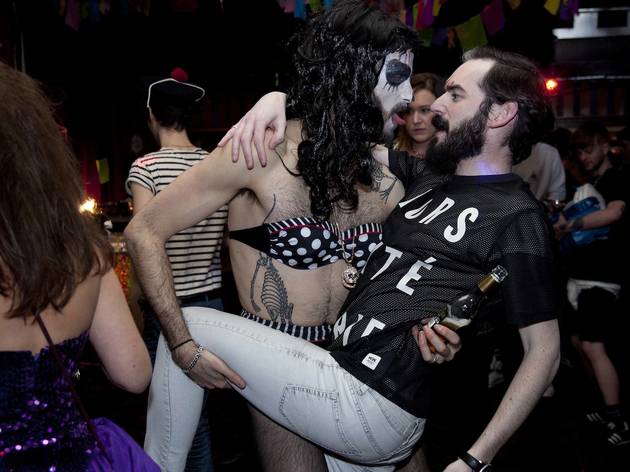 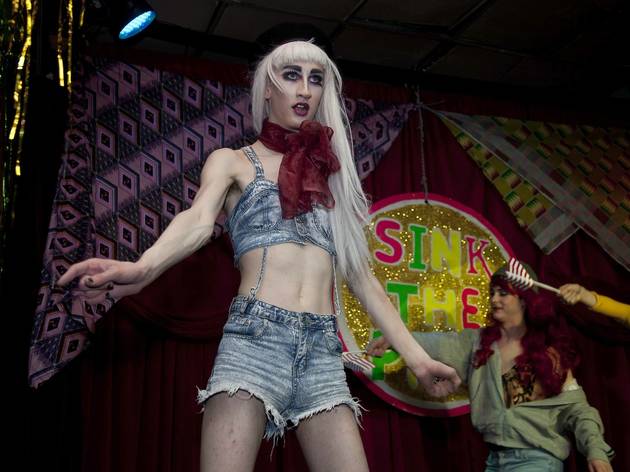 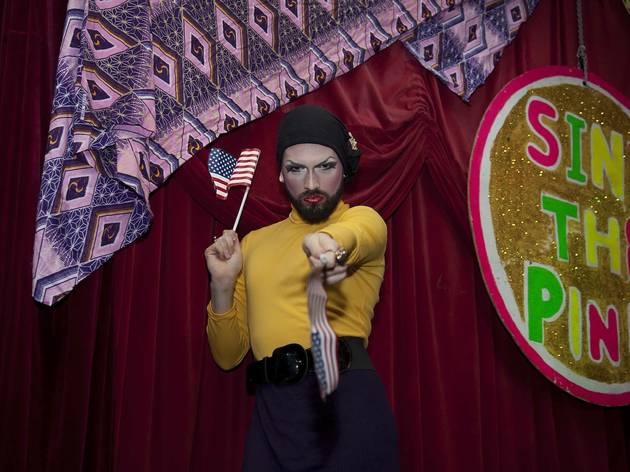 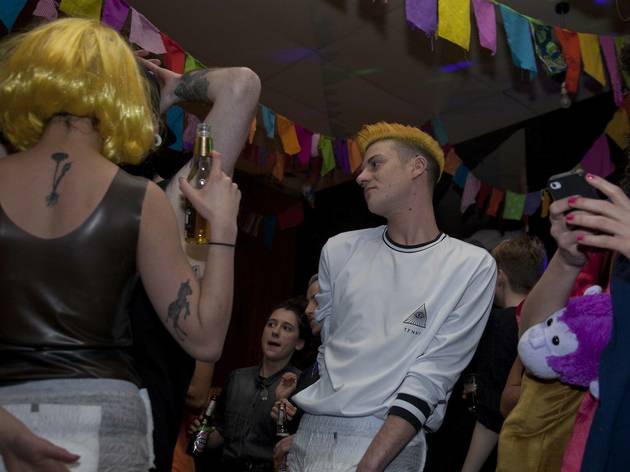 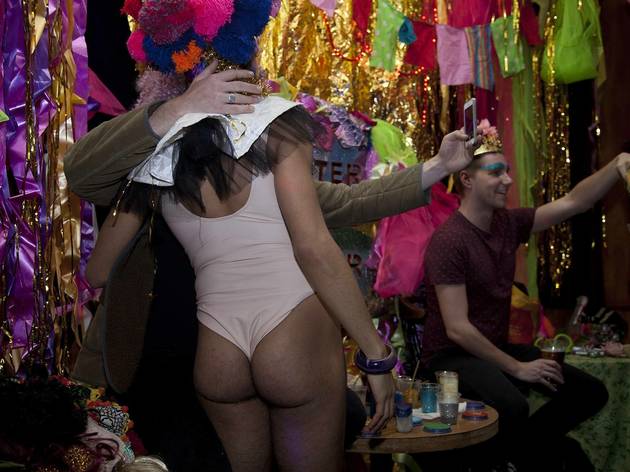 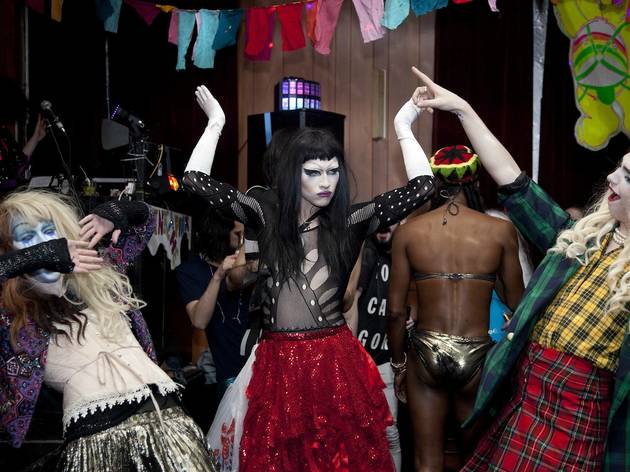 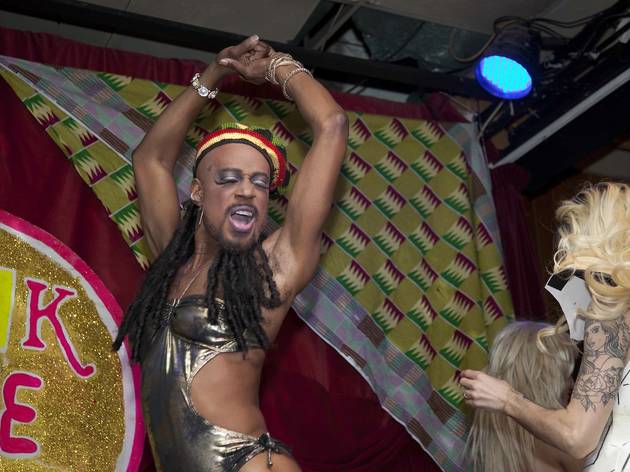 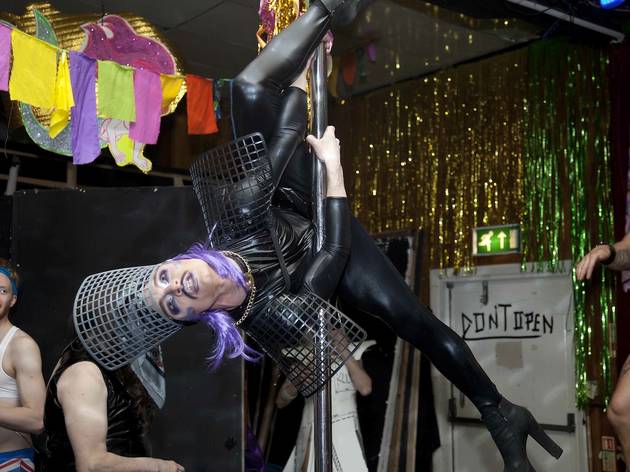 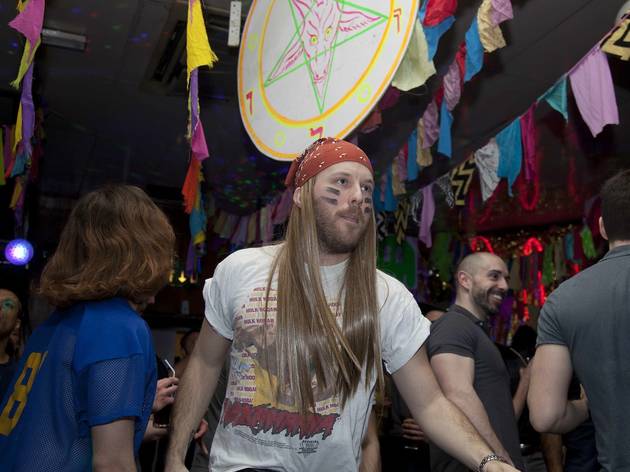 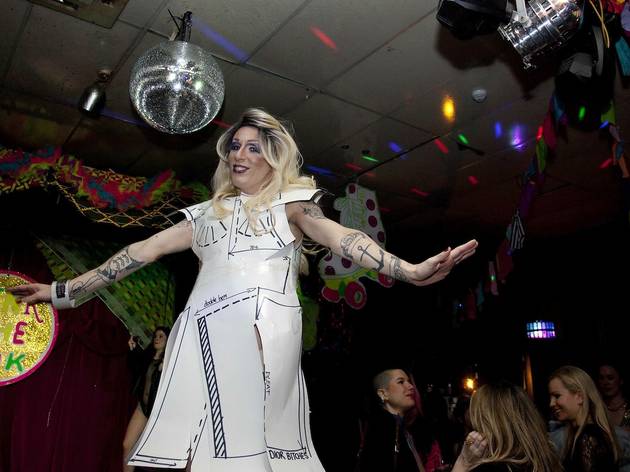 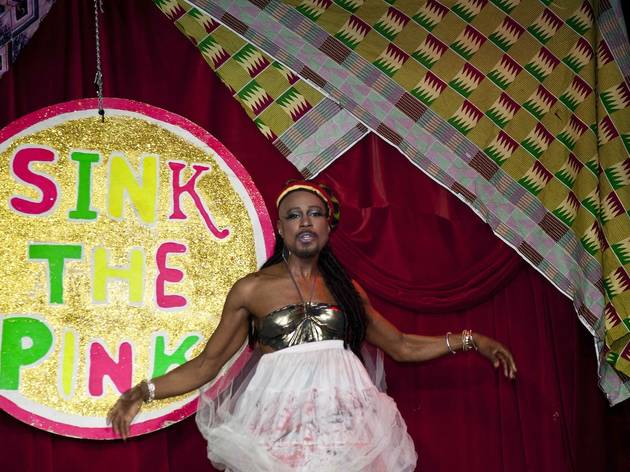 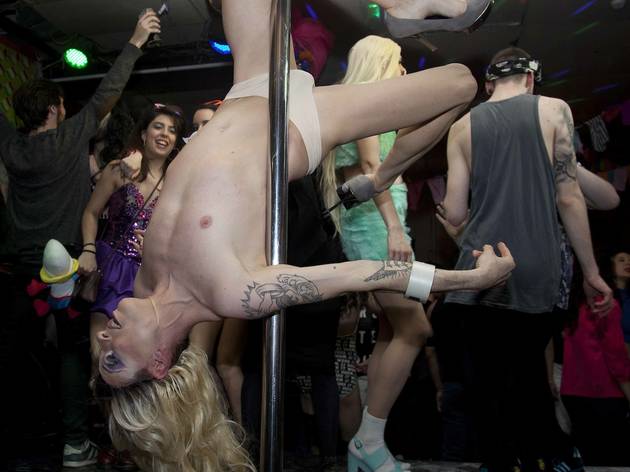 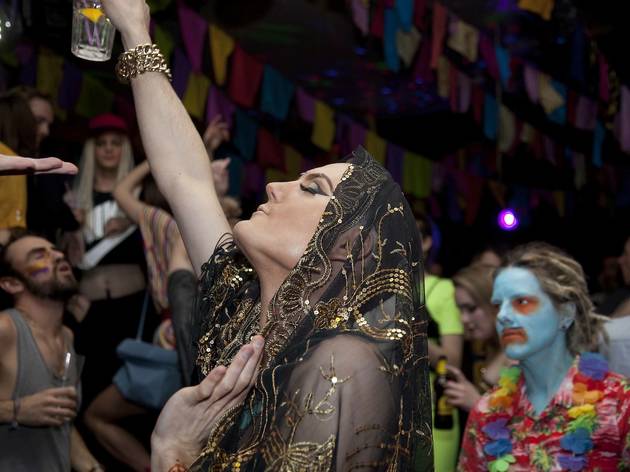 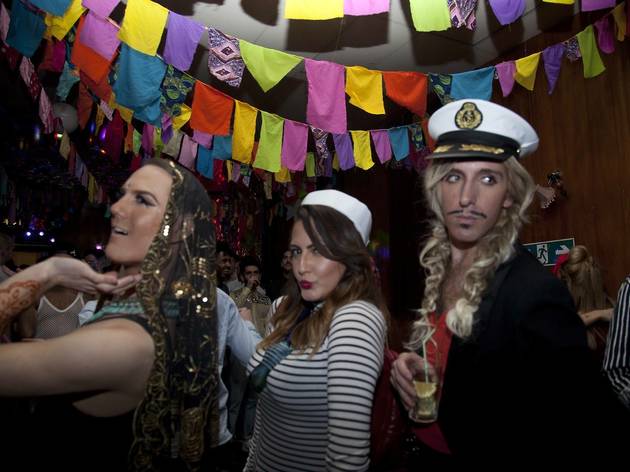 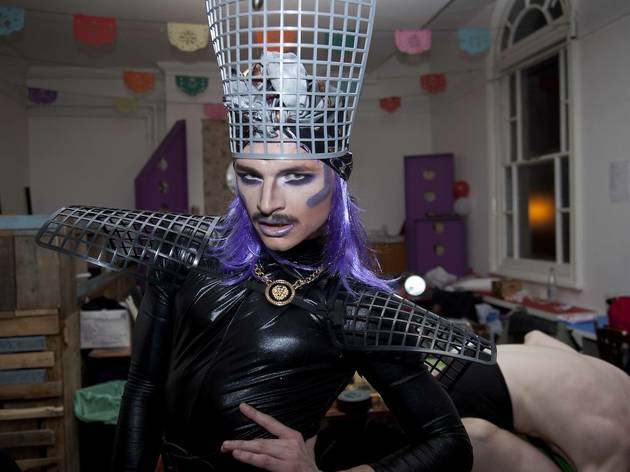 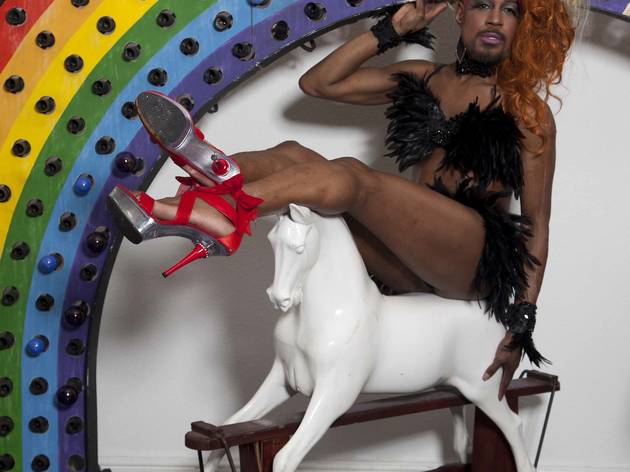 It's London Fashion Week, and at the best club in the city, the stars are out in force. Sort of. Karl Lagerfeld is clattering around in high heels. Donatella Versace is wearing a Japanese dog toy where her lips should be. Among the young punters here tonight are a girl dressed as Bowie and a white, male Grace Jones. A dragged-up goth priestess on a catwalk hands out plastic babies to the crowd, then collects them all back to the evocative sound of ‘All That She Wants’ by Ace of Base. Someone else has got the Chanel logo in glitter across their entire face. Ladies and gents, boys and girls, welcome to Sink the Pink.

If you worry that London is turning into somewhere sensible like Düsseldorf, or that homogenisation is strangling the city’s nightlife, babes, you’ve really got to get behind Sink the Pink. As LGBT spaces vanish (from the Joiners’ Arms and the Nelson’s Head in the East End, to Madame Jojo’s in Soho), STP is bucking the trend and reclaiming spaces that were once completely off-limits for gay Londoners.

Until now, Sink the Pink has made the Bethnal Green Working Men’s Club its base. This great melting-pot venue may appear untouched since the ’70s, and staffed by men and women in their seventies, but its booking policy has been as progressive and adventurous as you like. STP has made its monthlies at BGWMC famous for two things: glitter (everything and everyone is coated in it, thanks to their ‘Glitter My Shitter’ make-up stall) and ‘trannies’ – polysexual performers who turn up with a prepared routine and several homemade costumes, and who are too fun-loving and silly to ever, ever be on ‘RuPaul’s Drag Race’.

Despite refusing to take itself too seriously, Sink the Pink fits in the lineage of great London clubs, from The Blitz to Boombox, and inspires devotion in a way few nights do in the UK. One posse have come down from Liverpool for this month’s Fashion Week pisstake (subtitled ‘a night blowing hot air up fashion’s ass’). Come morning, they’ll drag their glittery bodies on to a Megabus heading back up the M6.

STP is the brainchild of two friends in their early thirties: Amy Zing and Glyn Famous, aka Donatella and Lagerfeld. I first meet Glyn as he changes into a leotard held together with safety pins, in tribute to Liz Hurley’s only contribution to history.

He’s more modestly dressed when we talk a few days later. So is Amy, who’s off to a meeting about making STP into a TV show, appropriately dressed a bit like Timmy Mallet. The roots of STP lie in possibly the lamest party ever: ‘We organised a Studio 54-themed New Year’s Eve party at my flat and forgot to invite anyone,’ Amy explains as Glyn creases up with laughter. ‘We’d decorated the house, made these great outfits, and at 10pm, we both realised we thought the other one had invited people. So we spent New Year’s Eve alone, dressed up, and we had the best night of our lives showing off and making each other laugh.’

All Amy and Glyn ever wanted with Sink the Pink was to create the most perfect house party imaginable. They’ve succeeded, to the point where they attract the randomest in celebrity guests: ‘I knew Bryan Adams was coming once,’ Glyn tells me. ‘His driver waited outside for him while he came into the dressing room. People were like: “No. Fucking. Way.”’ Amy was similarly awed: ‘Sam Smith was in our dressing room once, and he’s kind of one of us because he’s a young gay. But Bryan Adams... Your mum knows him, you know what I mean?’

There’s only one snag with the BGWMC: it’s not all that glam. Enter a very different east London venue: Metropolis Strip Club. A black, windowless brute of a building on Cambridge Heath Road, this old-school haunt is a curio to modern Hackneyites. While everything around it has become artisan, ironic and ‘nice’, Metropolis has remained an unreconstructed bastard of a place. ‘There were about nine girls dancing and two men watching,’ says Amy of her first visit. ‘It was quite awful. There’s a bleakness that hurts your soul when you realise: oh God, that industry still exists…’ And yet, confronted with its lasers, decent soundsystem, stripper poles, mirrored walls and insanely seedy sand-covered lounge, STP had finally found their dream venue. Last month, the crew launched Savage, a new weekly Saturday-night takeover of Metropolis. In a classic ‘only in east London’ move, it was out with the dirty old men and in with the glitter-soaked trannies.

At the ace launch night, ‘Showgirls’ vibes abounded as the ‘trannies’ made zesty use of the mezzanine-straddling pole. But there was a deeper logic at play: ‘It’s about taking what we do into a heteronormative space,’ says Amy. ‘You can’t get more [heteronormative] than a working men’s club and a gentlemen’s strip club! We are reappropriating them and making them safe queer spaces.’

For many reasons, not just gender, Amy has become the mother figure within STP. I ask for an example of how this manifests and she tells an awful story about one of their number – a young out-of-towner – getting beaten up after leaving the club: ‘Someone couldn’t quite handle how fabulous he looked’ is her take on it. The instant reaction among everyone around him: phone Amy. ‘I told them to put him in a taxi, that I’d be there at the other end. I cleaned him up, gave him tea and toast on mummy’s sofa and made sure the police were called. I’m so happy to be that person. They’re my children, y’know?’

It should be stressed that incidents like this are rare. STP’s community have all thrived since they joined the family. Off the back of Sink the Pink’s adoration of massive hairpieces, one of them now makes big catwalk hair even bigger for Chanel. One teaches a dance class called Hot Heels, that swaps trainers for platforms. One works for a politics website and is married to another of STP’s girls. ‘A real girl,’ Amy clarifies. ‘He’s actually a straight tranny. When they got married, they had two weddings: one where he was the bride and one where she was the bride.’ Glyn gets misty-eyed: ‘That is so fucking STP. They both give me such fucking joy.’ Really, it’s hard to disagree.