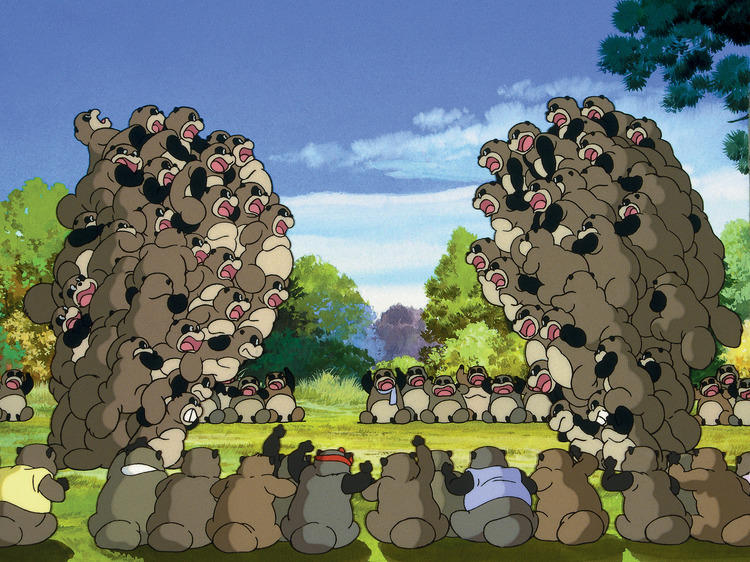 This thunderous Ghibli romp – part satire, part family adventure, part war ‘documentary’ – is one of the weirdest movies ever made.

Defining moment: The scene in which a raccoon transforms his scrotum into a giant sailing ship bound for nirvana. (We know you’re curious.)

If you’ve seen ‘Spirited Away’, with its ancient ghost demons, and ‘Porco Rosso’, with its farmyard flying ace, you’ll know that those Ghibli guys can get a little weird sometimes. But nothing can prepare you for the sheer, mind-melting oddness of ‘Grave of the Fireflies’ director Isao Takahata’s chronicle of the Great Raccoon War.

Structured in pseudodocumentary style, complete with constant voiceover and regular time leaps, it tells the tale of a group of shape-shifting raccoons who take up arms against the human beings destroying their woodland. But cozy critters this lot ain’t: Not only do they kill several people over the course of their campaign – and throw a huge party to celebrate – they also use their testicular pouches as everything from hot-air balloons to welcome mats, employ their transformative powers to infiltrate human society and argue constantly (and often viciously) with each other. Sweet, satirical, savage, sad, silly and quite spectacularly strange, ‘Pom Poko’ stands utterly alone. Tom Huddleston 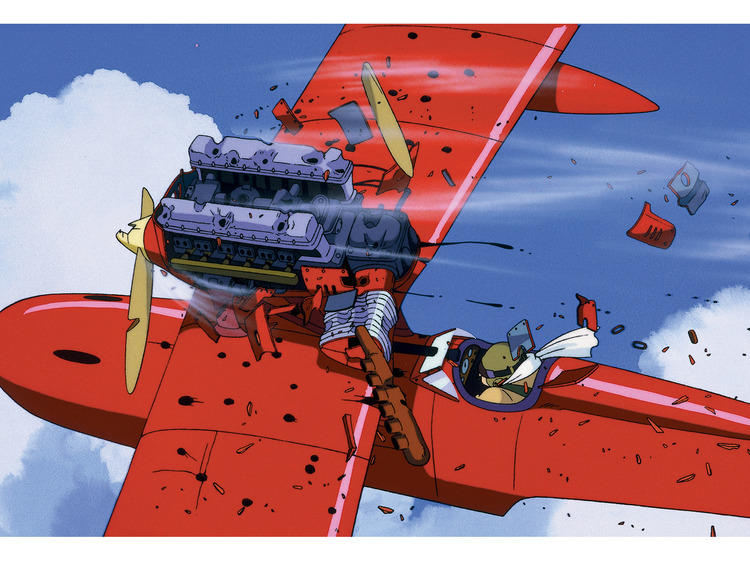 A tribute to classic Hollywood, aviation and the unlimited possibilities of cinema.

Best quote: ‘I’d rather be a pig than a fascist.’

The most impressive thing about writer-director-producer and Studio Ghibli chief Hayao Miyazaki is not his imagination (which is vast), nor his compassion (which is bottomless), but his extraordinary confidence: It takes a remarkable man to come up with a tale of a magical pig who flies planes in pre-WWII Italy. But it takes balls of brass to believe that such a story was worth spending three years and who knows how many million yen to bring to the screen. Thank God he did.

It takes some arguing to not see ‘Porco Rosso’ as Miyazaki’s crowning achievement, crammed with charm, empathy, historical irony and dry, brilliantly idiosyncratic wit. But most of all it stands as a testament to the power of film itself, presenting a world both inspired by cinema – from Errol Flynn to Humphrey Bogart via the Pagot brothers – and filled with it, from the movie magazines read by our crumpled porcine hero to the cat-and-mouse cartoons he loves to watch. Tom Huddleston 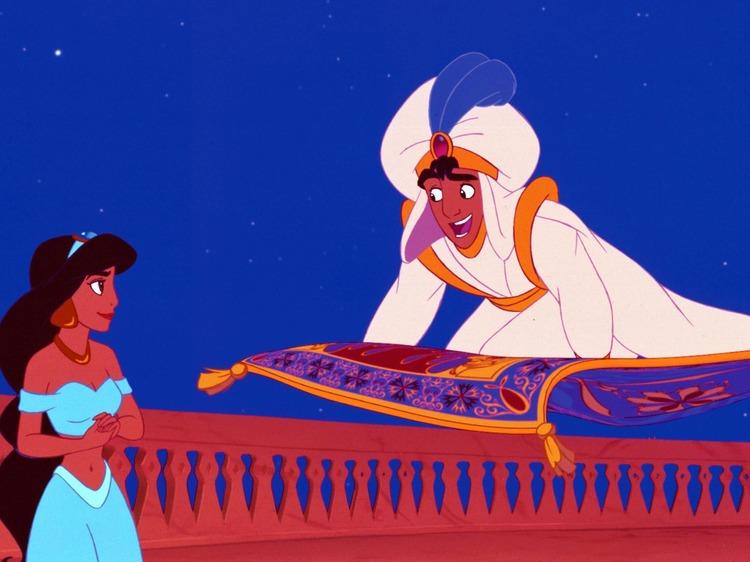 Disney’s comeback was assured when this lively romp made millions.

Best quote: ‘Three wishes, to be exact. And ixnay on the wishing for more wishes.’

Defining moment: The first appearance of the genie, voiced by Robin Williams, is a rat-a-tat stand-up routine set to dizzying visuals.

In 1992, Disney’s ‘Aladdin’ heralded the modern age of animation. The cave-of-wonders sequence was the first use of computer animation in a major Disney feature (with admittedly mixed results), while the appearance of Robin Williams as the Genie was a landmark in the employment of celebrity voices: This wasn’t so much a character as a self-portrait in ink and paint. Most importantly, the film’s massive success – it was the biggest movie of 1992 and the biggest animated film ever at the time – proved that, after years of false starts and disappointments, the public was once again ready to hand over their cash to an all-singing, all-quipping animated spectacular.

The film has its problems: Accusations of underlying racist attitudes, particularly of the original cut with its ‘They cut off your nose if they don’t like your face’ lyric, were perhaps justified. But this is the work of a company rediscovering its core purpose, to bring joy. Tom Huddleston 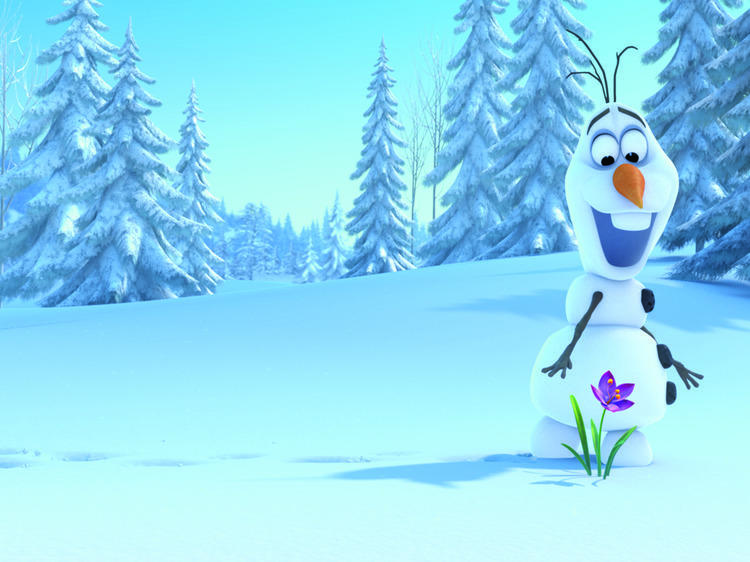 Disney takes a modern approach to an old-fashioned fairy tale.

Best quote: ‘Wait, you got engaged to someone you just met that day?’

Defining moment: Whether you think it’s a feminist belter or reactionary pop drivel, the Oscar-winning song ‘Let It Go’ is a new Disney classic.

Despite its box-office appeal and Oscar wins, Disney’s most recent animated smash divides opinion. Some see ‘Frozen’ as a delirious throwback to the studio’s classic era, with tongue firmly in cheek and belting torch songs galore (the stage musical cannot be far away). For others, though, its shiny veneer masks old-fashioned ideals: The heroines are all slim, perky and good-looking, and the idea that freedom drives women mad might not be a particularly welcome one.

Whatever your take, there’s no denying that ‘Frozen’ is ridiculously entertaining: beautifully animated, breathlessly paced and winningly goofy. The fun part is seeing those classic fairy-tale characters – the adventurous princess, the handsome prince and the wicked queen – being forced through a postmodern blender. Tom Huddleston 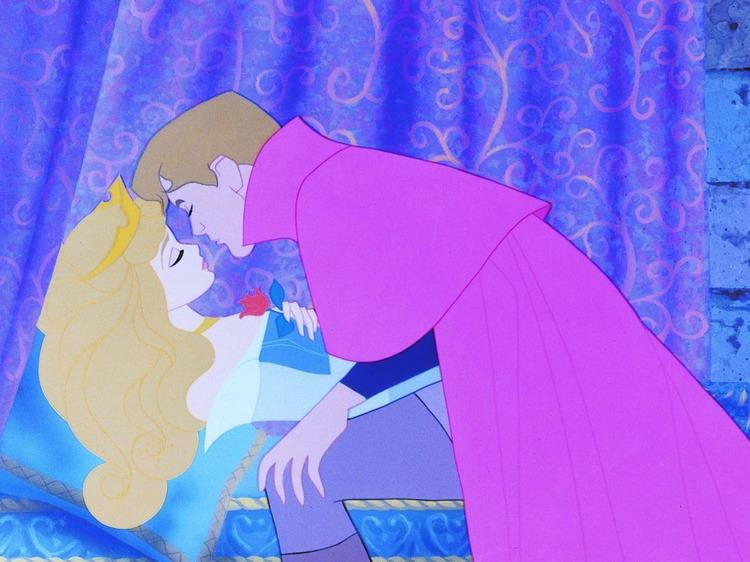 Never has a party snub had such dire consequences.

Best quote: ‘Now you shall deal with me, O prince, and all the powers of hell!’

Defining moment: Evil fairy Maleficent turns herself into a fire-breathing dragon and goes to battle.

In the Disney villainesses hall of fame, Maleficent ranks up there with Cruella De Vil. The self-proclaimed ‘mistress of all evil’, Maleficent is the badass fairy who casts a spell on Aurora at birth, causing the princess to prick her finger on a spinning wheel and die before her 16th birthday. Why? All because the king left her off the guest list at Aurora’s christening.

After nearly a decade of preparation, Walt Disney wanted ‘Sleeping Beauty’ to stand out from existing princess-led fairy tales ‘Snow White’ and ‘Cinderella’, and so it does. Inspired by medieval art and tapestries, this is Disney at its most wow-worthy, best of all in the lurid scenes at Maleficent’s lair.

‘Sleeping Beauty’ marked the end of an era – it was the final animation overseen directly by Walt himself, now busy building theme parks and making TV. That said, rebellious, feisty Aurora also harkens to the sparky princesses of Disney future, even if she’s muscled into a supporting-actress slot by a certain scene-stealing bad fairy. Cath Clarke 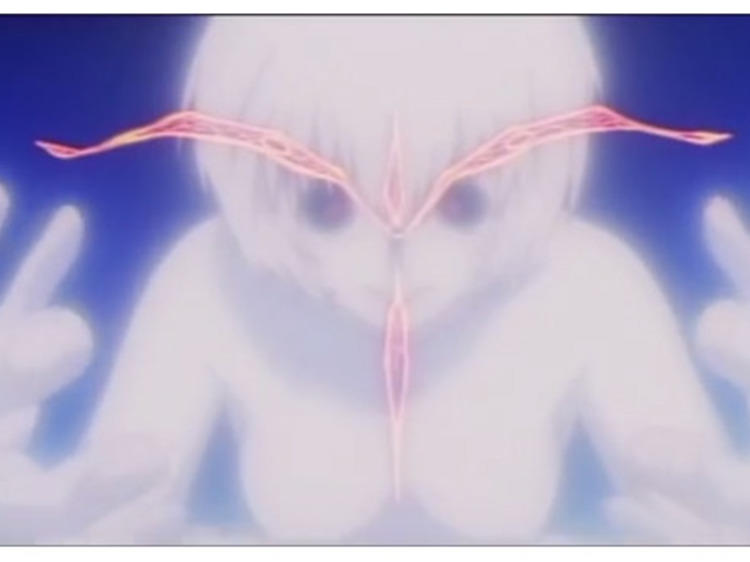 The seminal anime series comes to a close with an apocalyptic bang.

Best quote: Our protagonist laments, ‘I’m so fucked up.’

Defining moment: This is the way the world ends... to a pop song.

Fans were mightily displeased with the cerebral, action-free conclusion of Hideaki Anno’s anime TV series ‘Neon Genesis Evangelion’, in which humans fight otherworldly ‘angels’ with giant robots. So he went back to the drawing board and came up with this immensely satisfying, theatrically released alternate ending, which increases the orgiastic machine-on-monster violence tenfold while doubling down on the heady philosophical and spiritual allusions. 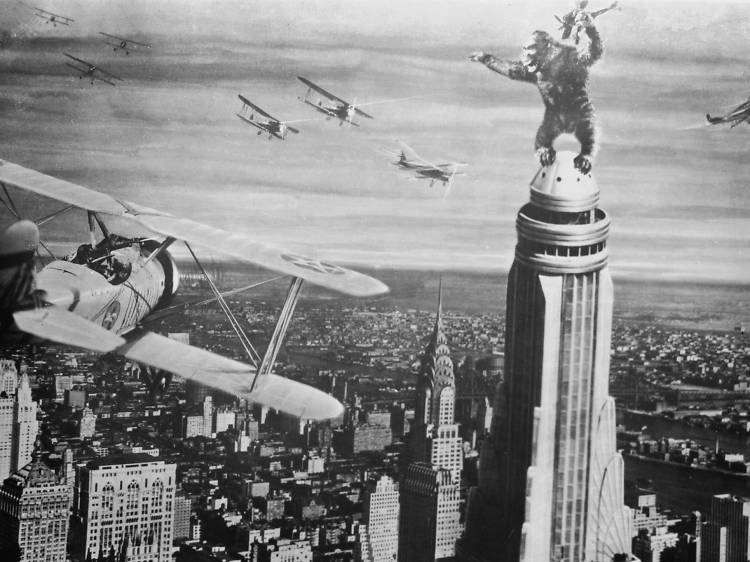 Best quote: ‘It was beauty killed the beast.’

Defining moment: When a T. Rex pauses to scratch his nose, these plasticine monsters really do come to life.

A central idea with this list was to leave the definition of an animated movie entirely in the hands of our contributors, with the result that a number of left-field choices managed to sneak in. For example, this classic live-action adventure story, which uses stop-motion figures to represent its title character, a romantically inclined giant ape, and his dinosaur adversaries. The number of filmmakers ‘King Kong’ has inspired is legion and legendary, from Ray Harryhausen – who sought the advice of animator Willis O’Brien while still a movie-mad teenager – to Peter Jackson – who famously (and rather pointlesssly) remade the film in 2005.

What makes ‘King Kong’ remarkable is its attention to detail: The world had never seen such convincing animated figures moving so fluidly within a real-world environment. The effect remains poetic and bewitching. Tom Huddleston 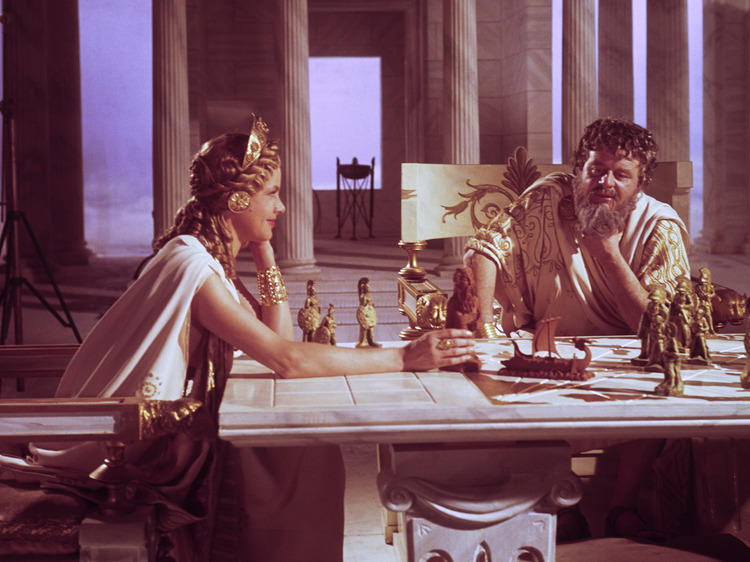 Best quote: ‘The gods are cruel! In time, men will learn to live without them.’

Defining moment: Sword-wielding skeletons rise from the turf to attack our band of brothers.

Generations of younger viewers remain convinced that Ray Harryhausen possessed the magical power to bring model figurines to life, simply on the strength of this ancient-Greek adventure pic he himself regarded as his finest achievement.

No one really remembers the plot, which involves Todd Armstrong’s frankly wooden Jason and his brawny crew taking to the seas to bring back the fabled Golden Fleece and thus ascend the throne of Thessaly. But the stop-frame-animation highlights are unforgettable – from fierce winged harpies to the bronze giant Talos and the snapping seven-headed Hydra. Best of all, though, is a battle with sword-swinging skeletons, raised from the earth to take on our heroes. The human and animated elements are uncannily integrated in a way that CGI never quite makes so tactile. They’re alive! Trevor Johnston 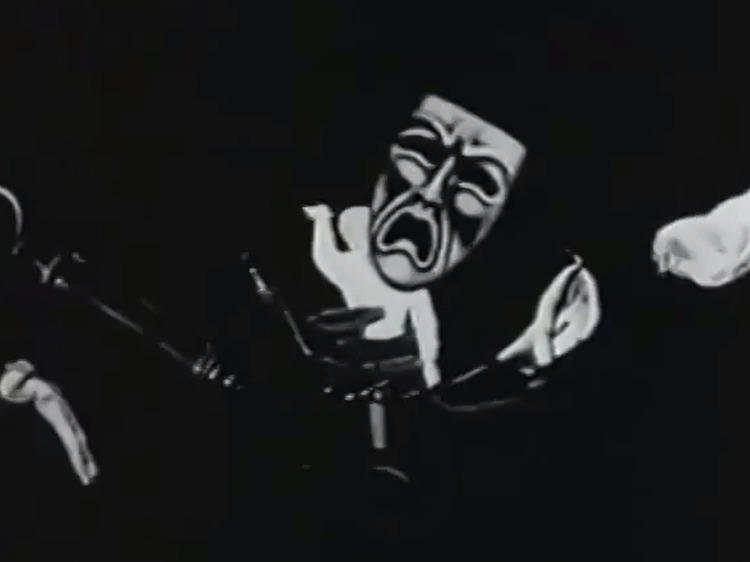 Best quote: This is all about the imagery. Words are too pedestrian, man.

Defining moment: A machine that allows you to play a game of tennis with a baby.

Uncompromisingly experimental, US filmmaker Harry Smith’s ‘Heaven and Earth Magic’ existed in various versions in the late 1950s and early 1960s, before settling down into this final 1962 cut. Scrappy and fiercely DIY in its aesthetic and produced under the auspices of Jonas Mekas’s Anthology Film Archives, this black-and-white film uses stop-motion animation techniques to tell stories with roughly cutout photographs.

In terms of story, maybe Smith himself best characterizes his avant-garde, surrealist approach: ‘The first part depicts the heroine’s toothache consequent to the loss of a very valuable watermelon, her dentistry and transportation to heaven. The second part depicts the return to Earth from being eaten by Max Müller on the day Edward VII dedicated the Great Sewer of London.’ Got that? The film’s audio consists only of sound effects, and it’s become a popular choice for screenings with a live score. Dave Calhoun 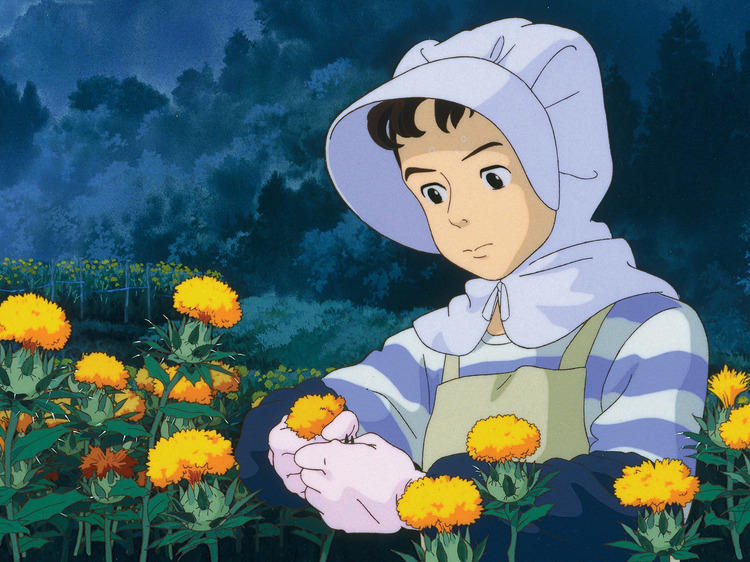 Best quote: ‘So many memories playing in my head like a movie, almost overpowering me.’

Defining moment: A ’60s Tokyo family tucking into a whole pineapple becomes a metaphor for life’s promises and disappointments.

A story about a 27-year-old remembering her school days while working on a farm in the country sounds like truly unlikely animated material. Trust the instincts of Studio Ghibli mainstay Isao Takahata, however, who reckoned that when we see recognisable life animated, it acquires a kind of solidity that makes us look anew at the everyday.

Here’s a drama that aims to understand the present by reexamining the past, yet it’s not doused in nostalgia. Instead the film explores with uncanny insight and accuracy the sundry minor high-school setbacks that have inhibited protagonist Taeko’s subsequent romantic fortunes. Better days may lie ahead, though, as the story works toward a final-reel emotional release that feels truthful and earned – something rare in any kind of cinema, and arguably unique in the annals of animation. It’s Ghibli’s secret classic. Trevor Johnston