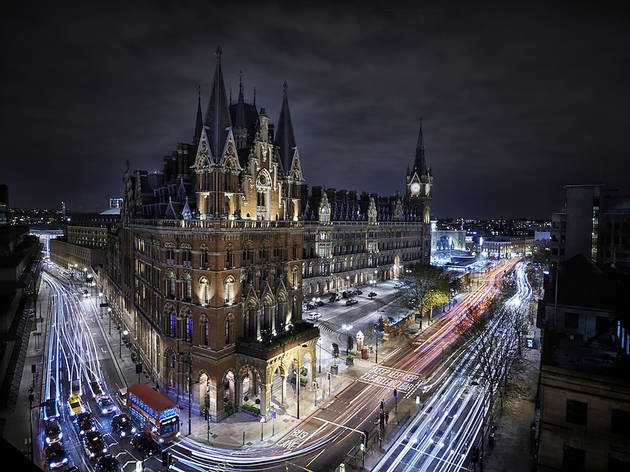 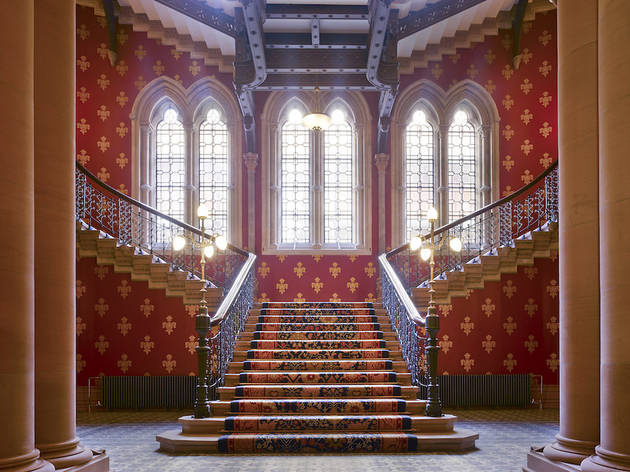 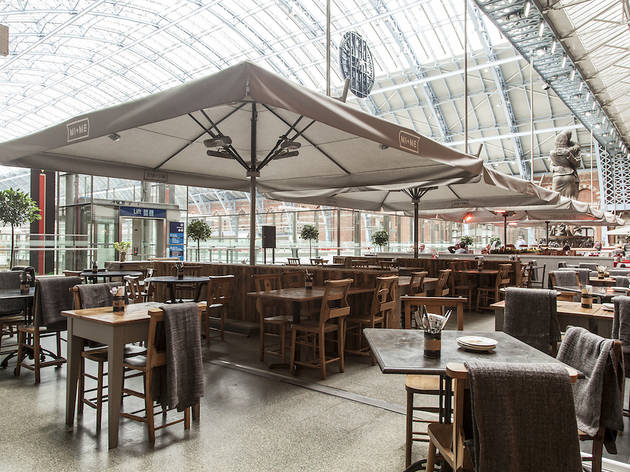 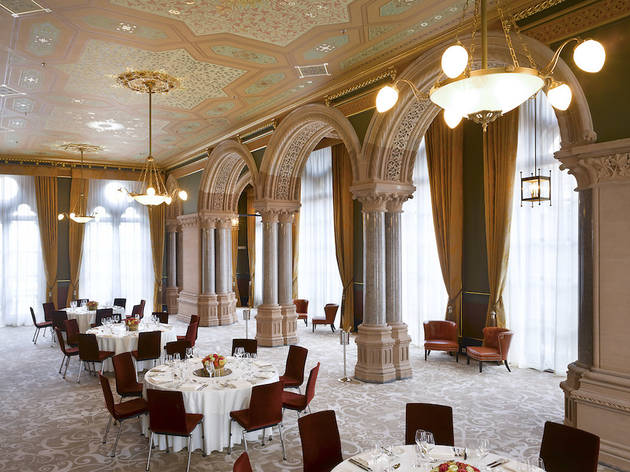 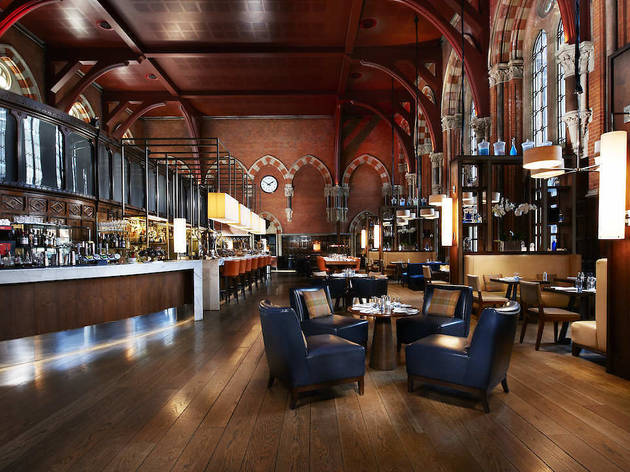 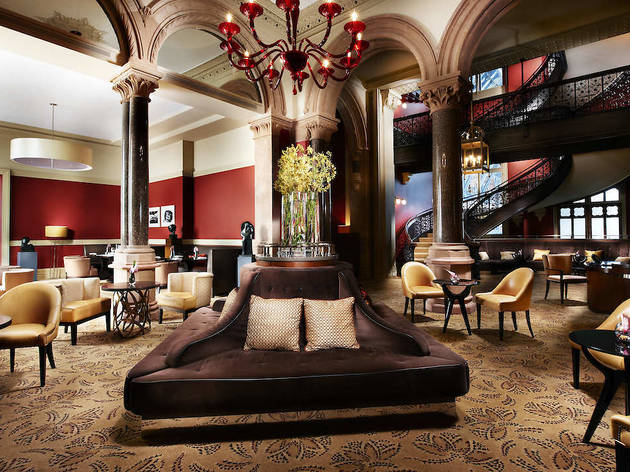 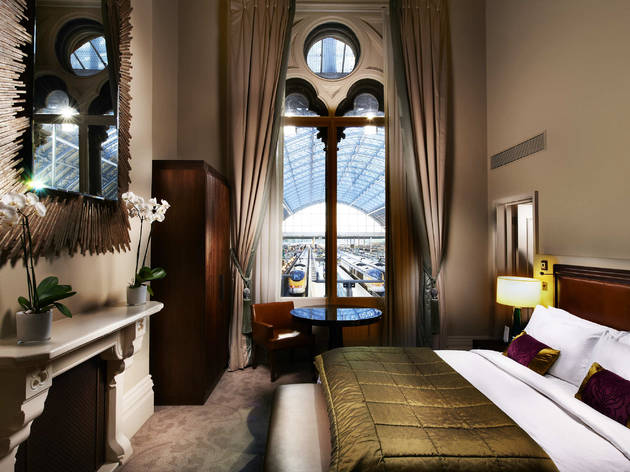 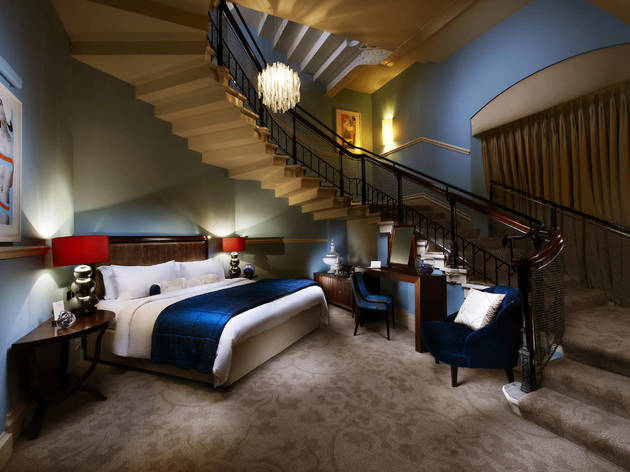 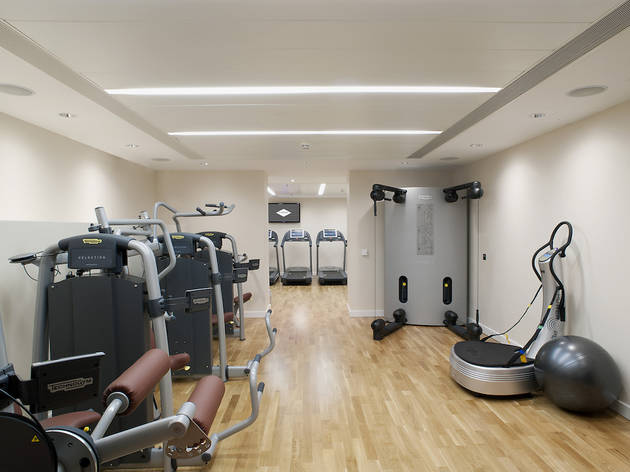 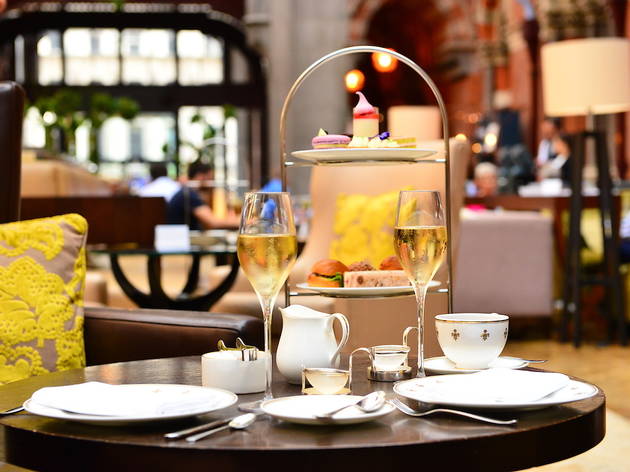 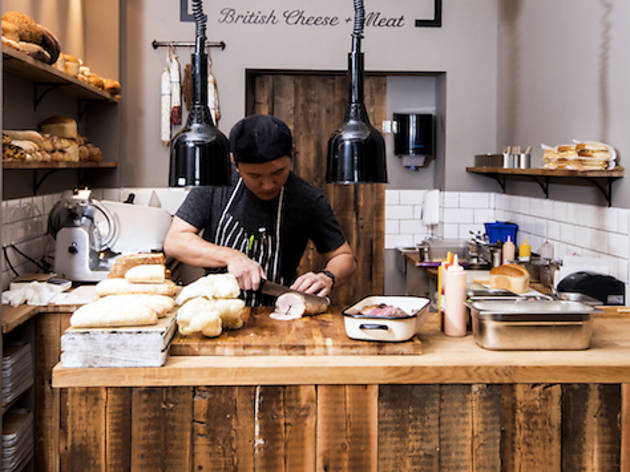 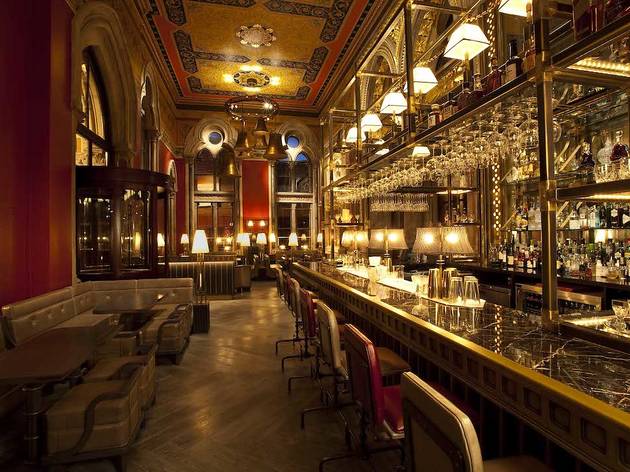 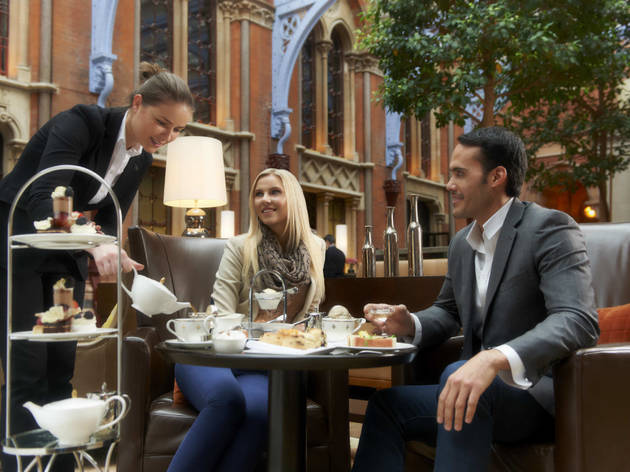 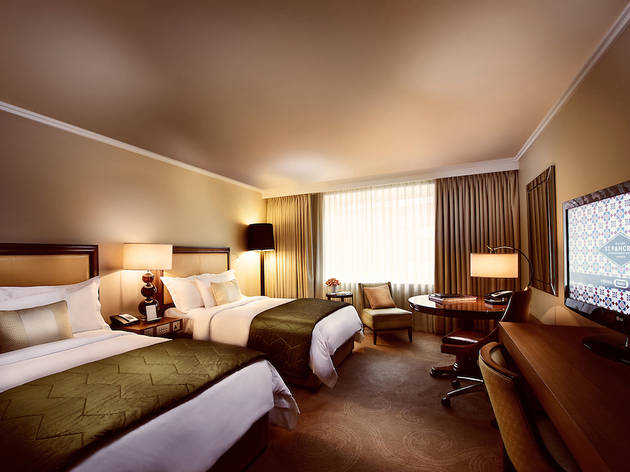 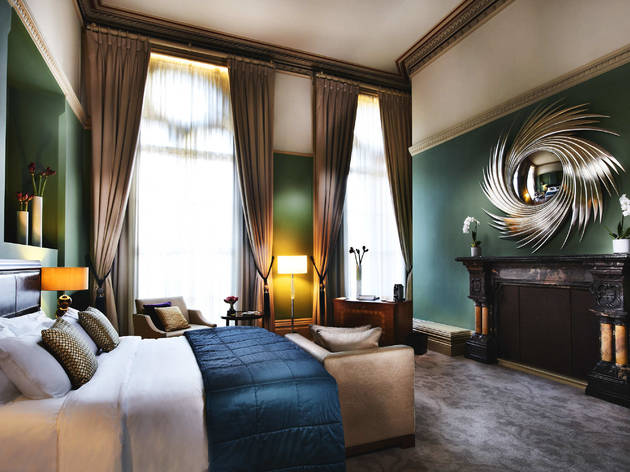 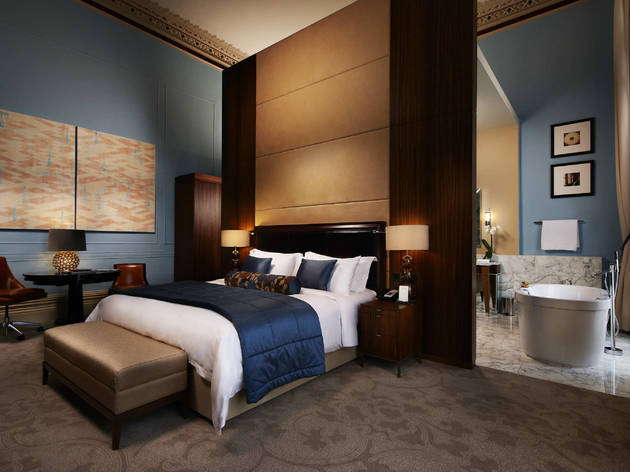 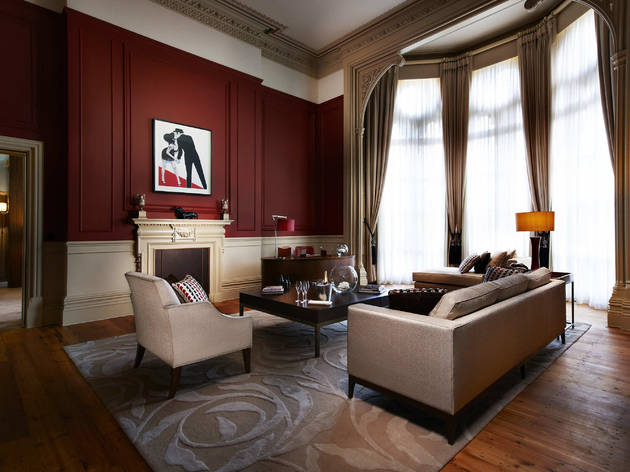 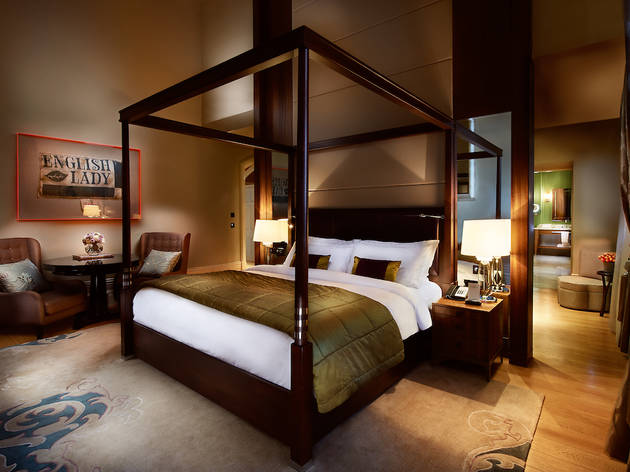 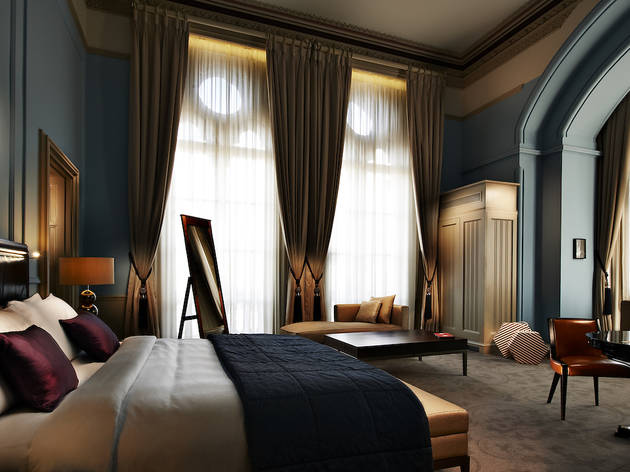 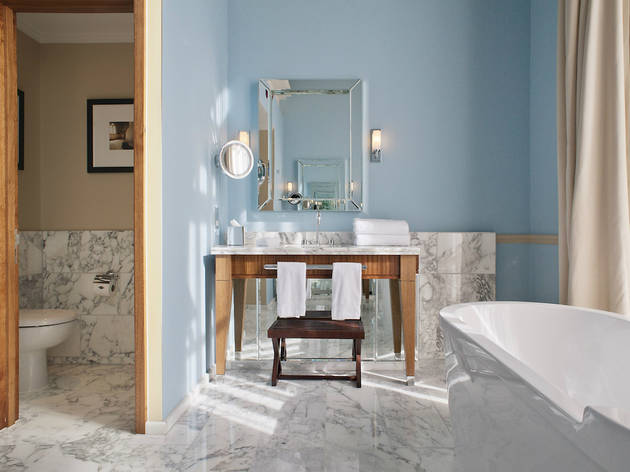 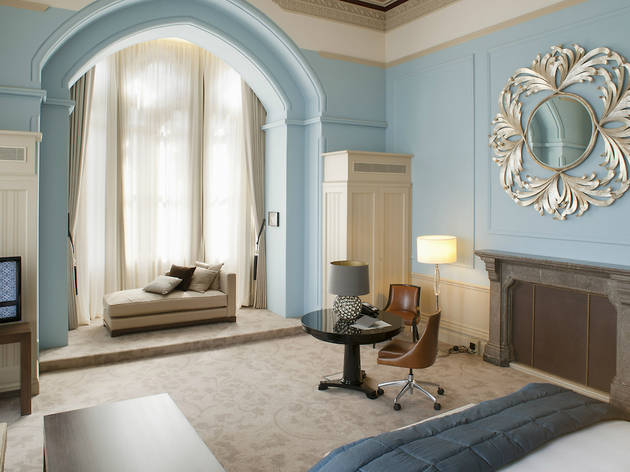 The only hotel in the world where you can hang out in a Harry Potter set and enjoy a genuine neo-Gothic masterpiece without even having to leave the station.

King’s Cross is London’s gateway to Europe, Hogwarts and the north. And the hotel that dominates its south-east facade is built on an appropriately epic scale. The colossal arched doors are plenty tall enough for Hagrid to enter, like in the movies. Inside, the only way is up. Pillars of Connemara marble rise up to pointed ceilings; the double staircase twists majestically; even the arched bedroom windows are so tall that the curtains are a minor miracle of engineering. It looks like it was built by a giant sometime during the industrial revolution – then redecorated, recently and ever so slightly naffly, by his comfort-loving new spouse.

This building, known as the Midland Grand Hotel way back when, is a monument to epic Victorian confidence and wild decorative detail. Amazingly, it was almost bulldozed in the ’60s and was a wreck ten years ago. Its immaculate architectural restoration and re-opening in 2011 was greeted with acclaim. Its actual architect George Gilbert Scott was prolific – the Agatha Christie of the Gothic revival. And like the churches Scott specialised in, it’s constructed more for awe and wonder than draught exclusion. But the Marriott group have done a sturdy job of insulating you from the outside world. Double glazing reduces the polluted east-west Euston Road to a mere thrum. Standard-issue luxury bathrooms have been deposited, in pods, in the oh-so-tall rooms. There’s also nice art, well-chosen books, authentic fleur-de-lys wallpaper, beds as wide as a bus and carpets as thick as Hagrid’s socks.

And then there’s the subterranean spa, which is a destination in its own right. It has everything, including a hot blue-tiled plunge pool, steam room, enchanting peacock-based decor; tactful service; subtle aromatherapy-based treatments and the kind of swish organic lotions and potions that make you melt with gratitude and feel a whole lot younger afterwards.

Elsewhere, this is a solid five-star hotel in the modern British style: expensive and unsurprising. There’s breakfast (decent) and casual modern British dining at the Booking Office restaurant and bar, overlooking the Eurostar terminal (very decent). More directional cocktails and cooking can be found at the Gilbert Scott bar and restaurant, a favourite for posh date nights and business hook-ups. Better book ahead for that, because it's out here, down in the basement, and up in the beautifully refurbished bones of the building that the magic happens.

Time Out tip
King’s Cross, where Harry caught his train to Hogwarts, is also the best connected tube station in London. Before you zip off everywhere, check out Granary Square, a broad piazza behind the station, where you can drink Roman wine and eat jugged hare at Grain Store, play Snake in the fountains, brunch noisily with damn good coffee at Caravan and sunbathe on the astroturfed stairs down to Regent’s Canal, along which you can walk to London Zoo, Primrose Hill and Little Venice.