My Account My Profile Sign out
My Account
Search
Worldwide Europe United Kingdom England London Mel Giedroyc on Eurovision 2017: 'Maybe other countries will feel sorry for us?'
Advertising

Last time the British public were asked to make a decision about Europe, 48.1 percent of us got pretty pissed off. This week, we get to try again, thanks to BBC Two’s ‘Eurovision: You Decide’. Six hopeful acts will be performing live from Hammersmith’s Eventim Apollo, after which the public’s votes will be added to an expert panel’s scores and we’ll have a Eurovision hopeful primed for battle in Kiev in May. Host Mel Giedroyc – who’s such a big Eurovision fan that she calls it ‘Eurovisj’ – tells us why it’s time for everyone to get involved.

You also hosted ‘Eurovision: You Decide’ last year. Why should people come along on the night?
‘Honestly, the atmosphere in the room will be incredible. It’s going to be stuffed to the gunnels with Eurovision fans, all buzzing and up for a good time. As I’m telling you about it now, all my hairs are standing on end – on various parts of my body. It’s just a lovely event and we blimmin’ need those in this day and age.’

But will it actually help us pick a decent song?
‘You know, I trust the public. I also think it’s good to be transparent about it and basically pass the buck. If it all goes tits up, we can just say, “The public decided, it’s their fault!”’

The UK’s had a rough time at Eurovision lately. Is Brexit the final nail in the coffin?
‘It’s really difficult to say. At this point, Theresa May really sounds like she means business with her swift and hard Brexit, but who knows where we’ll be in May? Maybe other countries will feel sorry for us and want to bring us back into the fold. Or maybe they’ll just think we’re a bunch of absolute Judas losers who deserve nul points.’

If we sent Adele with a song called ‘We’re So Sorry’, could we win?
‘Ha! Everyone’s been saying for years, “Why don’t we just send a big pop star?” I used to be obsessed with the idea of Alison Moyet doing Eurovision for us with a big ballad, because she’s got the best voice in Europe. But now, I really think the key is having a great song and lots of confidence. I just re-watched Katrina and the Waves’ winning performance [from 1997] and she doesn’t have the best hairdo or the trendiest outfit. But when she walks on stage, you can see in her eyes that she believes she can win.’

How do we give our Eurovision act this Katrina-style confidence?
‘Oh man, that is elusive. Because what we don’t want is another Daz Sampson coming out and calling himself the people’s champion and saying Eurovision will get him a Top 5 hit and a knighthood. The kind of confidence I’m talking about is an inbuilt thing; it’s not about the words they spout. And hopefully it’s something the Great British public will spot in somebody on Friday. But look, we’ve got until May – I’m sure I can perfect some confidence tricks to teach them before then.’

How would you win over people who think they’re too cool for Eurovision?
‘Look at the ashes that surround us. In the immortal words of Conchita Wurst: “We need to rise like a phoenix.” And we can only do that if everyone gets on board. And did you see Justin Timberlake performing last year? Five years ago, that would have been a Lithuanian folk-dance troupe and some pancake-makers. I think Eurovision is almost getting too cool, actually. So I’d say to the sceptics: “Get with the curve, guys!”’

Tickets for ‘Eurovision: You Decide’ at Eventim Apollo are available here. Watch on BBC Two at 7.30pm on Friday Jan 27. 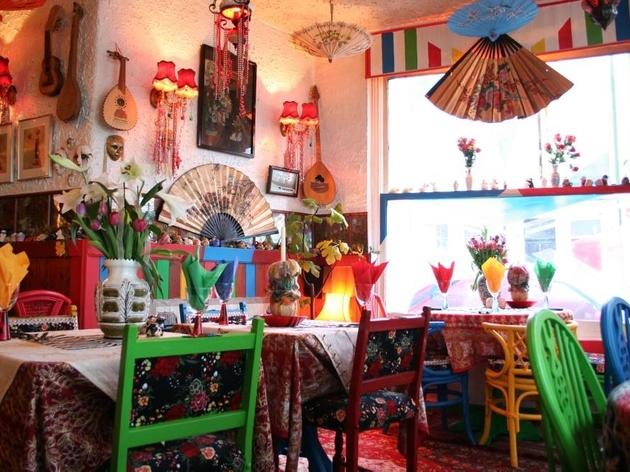 Given the fact that Hammersmith is a major travel hub, it is unsurprising that you can explore the culinary world in a day with the area's restaurants. They feature a wide range of cuisines, from Keralite food (from an area in southern India) at Shilpa and eclectic vegetarian fare of The Gate to Saigon Saigon's Vietnamese and Polanka's Polish menus.