Of London’s 24,000 cabbies, only 2 percent are women. Karen Spates is one of them. So what’s life like as a female cabbie?

‘As a child growing up in London, I was fascinated by the stories of black cab drivers and the prospect of learning The Knowledge and finding all the little London streets. I always wanted to become a cabbie, but my parents frowned upon it. So when I grew up, I went into the City instead, where I worked in insurance for seven years. It was only being made redundant from that job that led me to the career I had really wanted all along.

In 2000, I took a job as a driving instructor to help finance my studying for The Knowledge. The average time it takes to study and pass the test is two to four years. It took me even longer than that, because I was supporting my studying by working, but I finally passed in 2012. On my presentation day, I was the only woman out of a group of 40 men. My name was even called out as “Mr…”.

I only know four other female cab drivers and I keep in touch with them, but none of them work nights – I’m one of very few in London who do. Most men will call me “mate” when they’re giving an address – they just assume I’m going to be a man. Some say I shouldn’t be working nights as a woman, and one man even gave me £160 to promise to go home.

Working nights has a darker side. Lots of men have offered to “get in the back” with me and show me a good time because they can’t pay. I laugh it off as best I can: at least they can’t get me at the front. One guy offered me £500 to sleep with him and pushed the cash through the glass. When I got to where he was going, I called two British Transport Police over to get him out.

As a female cab driver, you build your safety instinct quickly and if you do need the police, they’re there within seconds. And it’s not just me: a couple of male colleagues have been propositioned too. 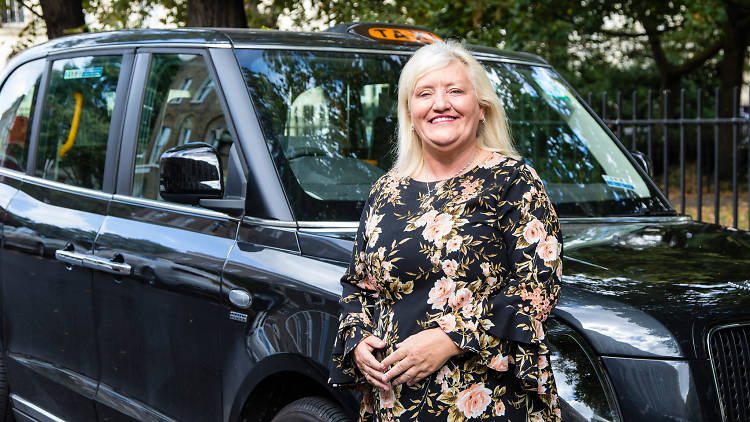 Driving a cab has never been about the money: I just love the freedom of it. I’m still a driving instructor for a couple of weeks each month, and I drive the cab on nights – it’s a form of relaxation. I’m the first female electric cab driver in London and I adore my new LEVC taxi. It’s smoother, quieter and more environmentally friendly than the [traditional] black cabs, plus using electric and petrol (rather than diesel) saves me around £120 a week, which means I can get my nails done and go on another holiday each year. Passengers love it too, especially the panoramic glass roof. It looks like a Bentley, so it gets a lot of attention – over the summer, one guy offered to exchange his Porsche for my cab!

There’s still a long way for women to go in my industry and you have to stand your ground to succeed. Some of the people I studied The Knowledge with still think women should be at home doing the dishes. Yet I’ve heard many of my passengers say they want more female drivers on the road, especially at night. Our cabs always smell better too.

Despite those misconceptions, this is a brilliant career for women. I like having the intuitions that men wouldn’t, like knowing when I should listen to the woman who wants to go home rather than go back with the guy she’s with. I love having the rapport with my passengers – it’s a job I would never give up now. I should have done it 25 years ago instead of going into the City! You really put your life on the line to become a cab driver, but it’s worth it. It’s far more than just getting people from A to B.’