Restaurants, Contemporary European City of London
Recommended
4 out of 5 stars 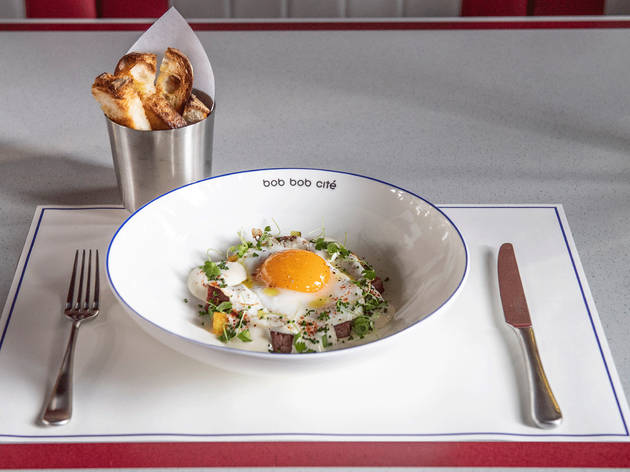 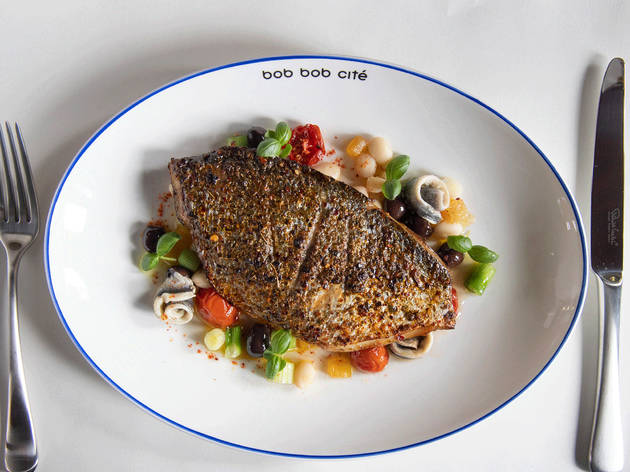 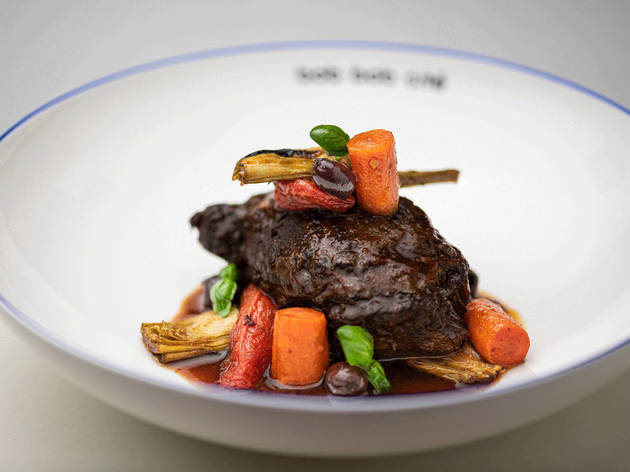 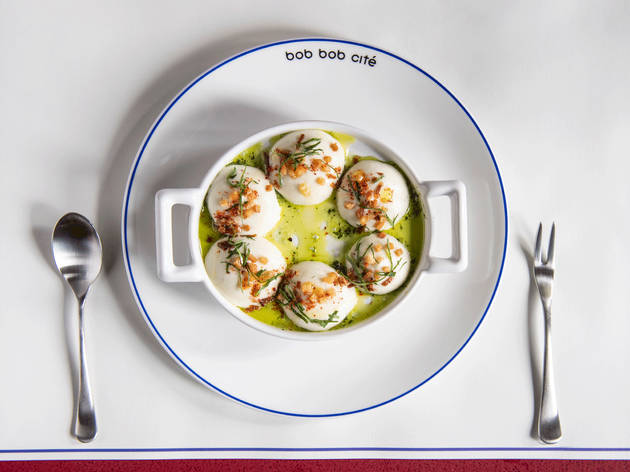 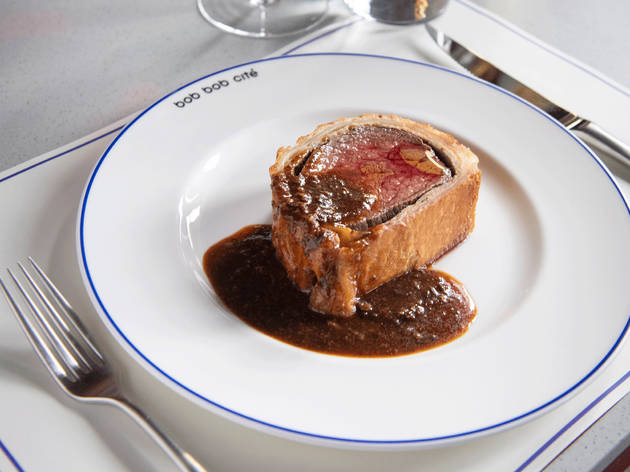 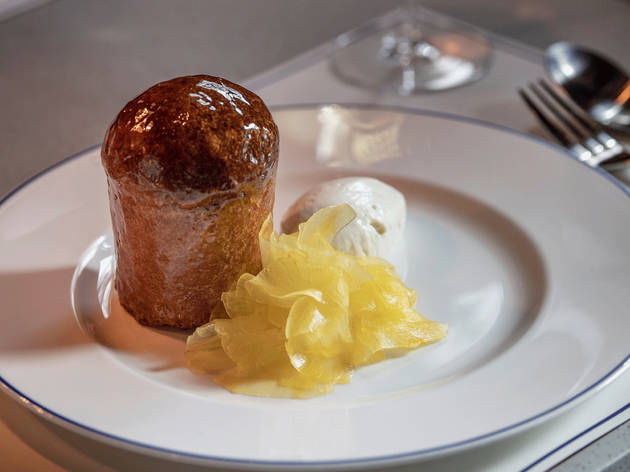 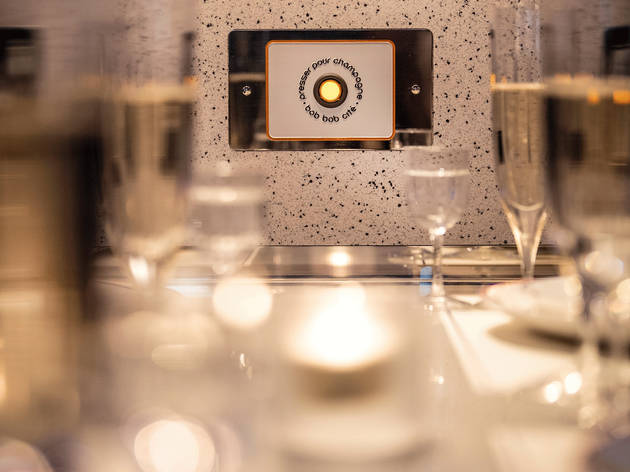 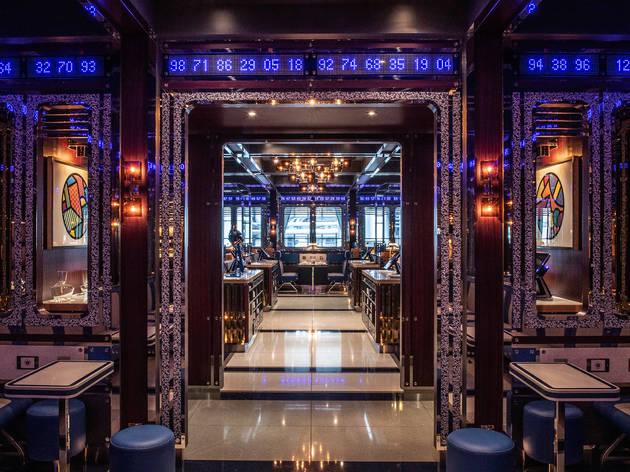 A City sibling to Soho’s Bob Bob Ricard, styled like an Edwardian train.

‘Isn’t that the place with the champagne button?’ says everyone, always, if you mention Soho’s Bob Bob Ricard. And this, its City sibling, has one per table, too. But take note: there’s more to BBC than a shiny blob on the wall, waiting to be pushed.

Like: you enter via a glass lift, which has a (very nice) doorman, presumably to stop anyone without a reservation from walking in off the street and pulling an in-elevator moonie. This isn’t Duck & Waffle’s Heron Tower, though: don’t expect your ears to pop – you’re only going up three floors – but it’s still a fun way to start an evening. Once in the dining room, there’s an assault of glamour. Every surface shines and shimmers. It’s all delightfully deco and don’t get me started on the loos. And, like the original, the space is laid out with individual booths, à la the dining car of an Edwardian train, complete with compartments for your umbrella and coat.

Best of all, like a real dining car, it’s priced for all classes of traveller, from a classic fish pie (£19.50) to lavish plates of oysters (£13-£36) or caviar (£39/£55). And, because this is a Russian-owned joint, shots of vodka served at -18C. We went for mid-market comfort, and were heartened to find that, unlike your average on-board eating experience, it was ace.

Seafood is a strength – from a simple-but-stunning crab and avocado salad to a lobster mac ’n’ cheese that we could. Not. Stop. Eating. It’s an example of how when you take something seemingly basic – pasta plus fromage – add generous chunks of grilled crustacean, and smother the whole lot in four kinds of cheese – gruyère, cheddar, parmesan and mozzarella – you get something glorious. Tang, depth and that oh-so-important melting stringiness. Plus the golden crunch coating of a breadcrumb gratin topping. It was the most addictively delicious mac ’n’ cheese we’ve had since Hawksmoor’s, and that’s saying something.

The young, affable crew know their menu inside out, and will sprint after you when you inevitably leave your brolly in its cute little side cubby. They’ll also come running if you press that button. How they manage this is via a clever stock-exchange-style ticker on the perimeter of the dining room. Every table has a number, when you press the button, yours will flash up. Presto: server appears. In short, a lot like the buttons Yo! Sushi started doing in the ’90s (only those ones triggered a robot voice shouting ‘yo yo yo’, while staff searched for the table with the light flashing above it). Essentially, it’s a ‘press for service’ button. Could you order something other than fizz? Probably. They’re a nice bunch. Does that mean it’s a bit of a gimmick? Well, yes. But who cares? The City – a place where everyone still wears grey, navy or black – is woefully thin on restaurants with any sense of theatre or fun. And Bob Bob Cité has bags of both.

Chef Eric Chavot serves classic French country cooking in London’s most luxurious all-booth dining room, complete with 'Presser pour champagne' button and one of the largest by the glass menus in the city.
Share Tweet