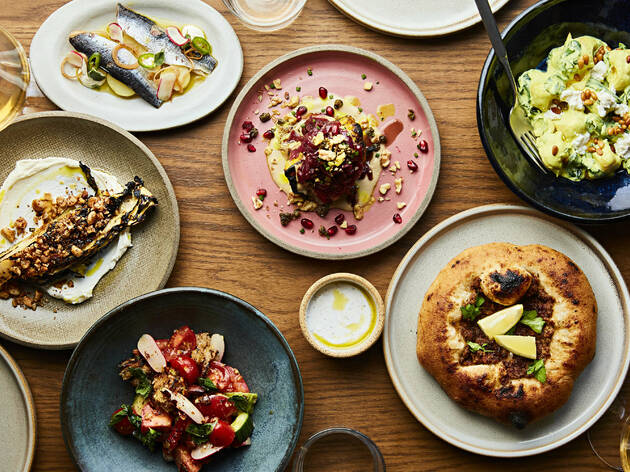 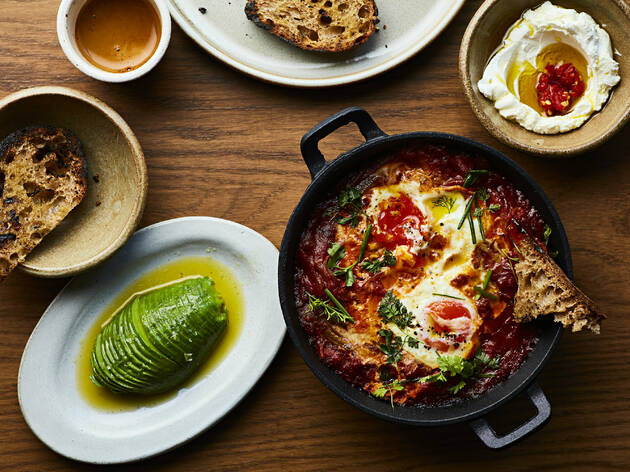 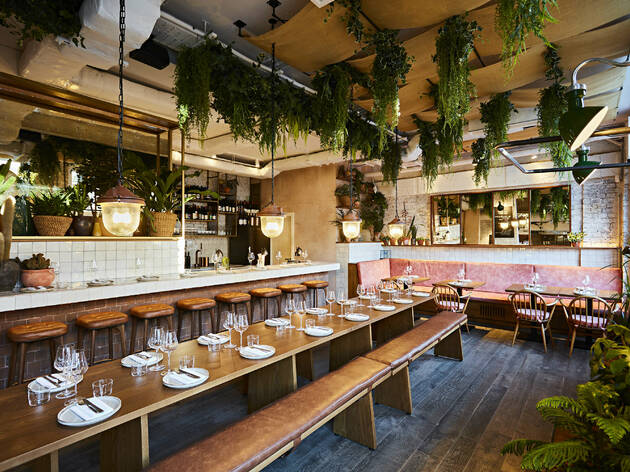 In 2015, chef Josh Katz opened Berber & Q, a now much-loved Middle Eastern grill and smokehouse in Hackney. Next came sister restaurant Shawarma Bar on Exmouth Market. But Katz lives way across town in west London, so for his latest project – with brother Paul and business partner Mattia Bianchi – he has chosen to set up closer to home, in Queen’s Park. Finally, a bit of restaurant love for my neck of the woods.

Carmel, the resulting all-day Eastern Mediterranean restaurant, is a delight. The interior is mainly white – tiles and painted brickwork – and numerous plants nestle on ledges and hang from the ceiling. There are three seating options: up at the counter overlooking the open kitchen or the bar; on benches along the communal table that stretches across the room; or, our choice, in the row of smaller tables suitable for a more intimate experience. We visited in the evening, but there’s an exciting lunch menu too, and the plan is for Carmel to open for breakfasts of shakshuka, turmeric-fried eggs and stuffed french toast as well.

From the dinner line-up of small and large sharing plates, we started with firm and zesty cured sardines with lemon verjus, chunks of soft potato and sour cream, topped with slices of onion, green chilli and radish. Each mouthful was a riot of contrasting yet complementary tastes and textures – a very well-put-together combination.

Then came the surprise of the evening: this carnivore found a vegetable dish that rivalled any of the meat or seafood plates we tried. And the star turn was cabbage. Cabbage! Crunchy yet smooth hispi cabbage with not a hint of bitterness, charred to perfection, generously covered in ras el hanout and macadamia dukkah, and laid on a slick of labneh and olive oil. A smoky, fresh, deeply moreish revelation. Cabbage!

More predictably delicious was the wild mushroom sourdough flatbread. Imagine a tomato-free eight-inch pizza with a pile of toppings in the middle and a thick but light and puffy crust all the way round. Instead of bog-standard button mushroom slices, there’s an array of unusual fungi, each with their own distinctive character. The mozzarella has been replaced with cubes of Manouri cheese (like a firmer version of ricotta). And the whole glorious concoction has been crowned with blobs of herby, spicy, zingy zhug. Domino’s this ain’t. Meaty and fishy versions also available.

Time for the big plates. We ordered two between us and quickly discovered that one would have been plenty. But where’s the fun in that? The smoked lamb neck shawarma with shio koji (a fermented grain marinade), garlic labneh, pickled turnip and more of that heavenly zhug, was beautifully cooked but the cut was a little fatty for my taste. The accoutrements were all excellent, though. The slow-grilled Urfa chilli chicken, however, was out of this world. Well, out of Turkey. It was pink and succulent with a sticky, smoky, blackened skin, came sitting in a pool of pomegranate molasses jus and was accompanied by another charred leafy wonder: curry-pickled radicchio. Best of all, underneath the chicken was a thick slab of bread which soaked up the sweet, sweet sauce and all the juices from the meat, yet managed to maintain its structure and texture to provide a moist, chewy, crunchy distillation of the dish’s flavours. Outstanding.

The drinks and desserts were enjoyable and weirdly evocative. My friend’s A Walk in QP cocktail of plum, Maraschino and Brancamenta (a mint digestif) had strong undertones of cherry bakewell, and the two-tone sesame brittle perched atop my chocolate tahini tart was like a posh version of those healthy-not-healthy childhood snacks Sesame Snaps. But these confections didn’t turn our heads like the savoury offerings at Carmel did. Especially the cabbage.

The vibe Buzzy yet relaxed, with efficient but unobtrusive service.

The food Middle Eastern and Mediterranean flavours with an emphasis on smoking and grilling.

The drinks A compact wine list, plus cocktails, aperitifs, digestifs, softs and an impressive selection of spirits for afters. NB there’s only one beer on the menu.

Time Out tip Specify which area you want to sit in when you book, or you might find yourself perched on a stool when you’d rather be lounging on a banquette.