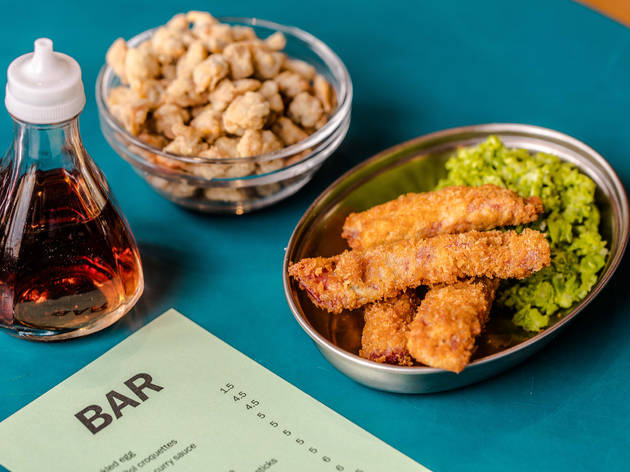 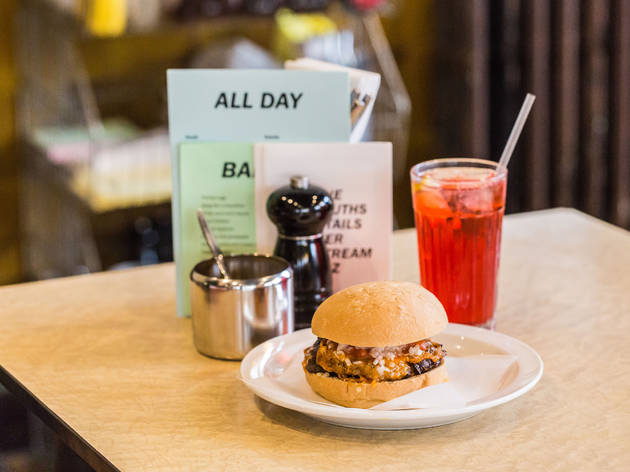 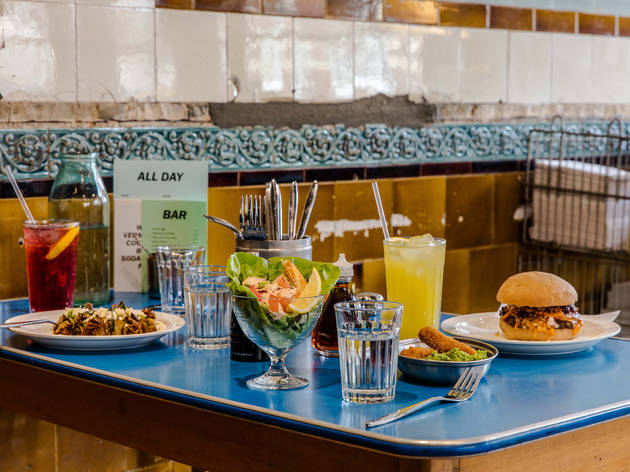 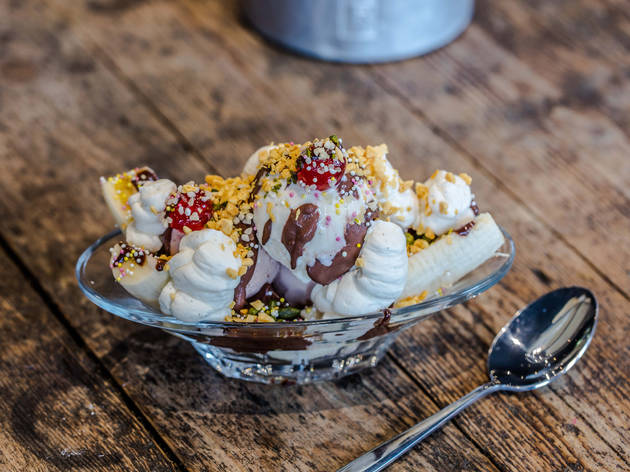 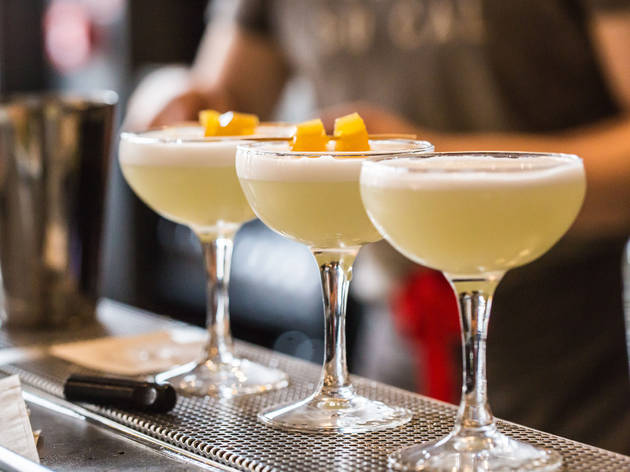 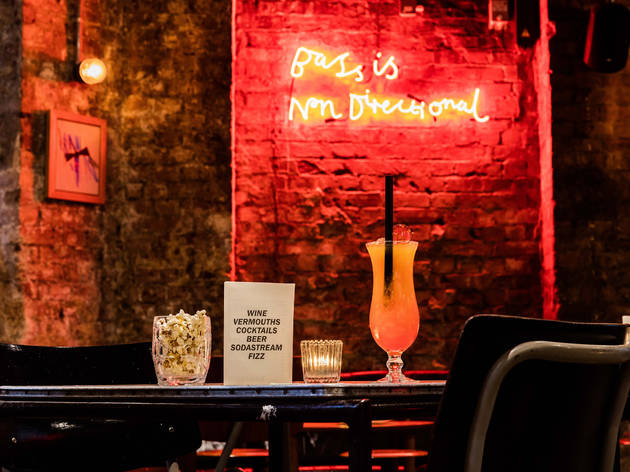 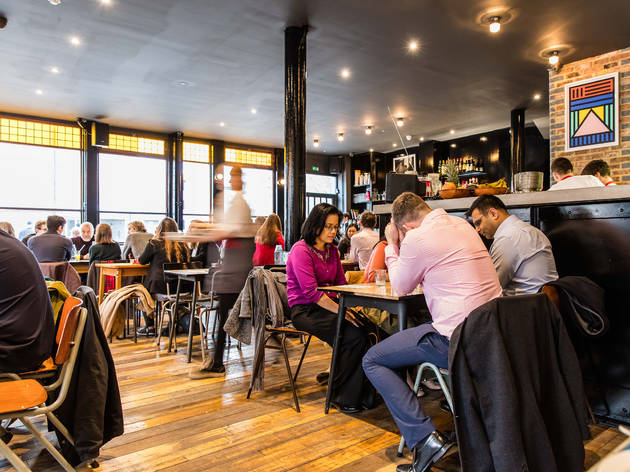 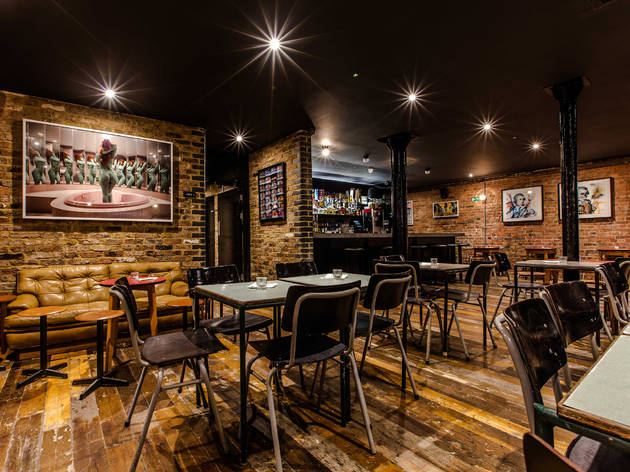 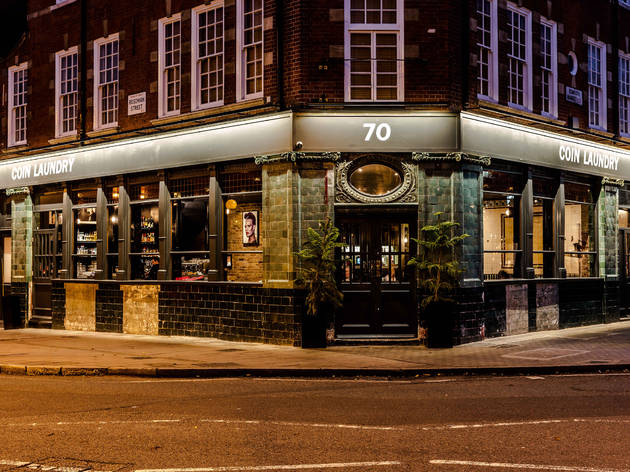 Fans of ironically retro food and drink should heart this Seventies-style addition to restaurant-packed Exmouth Market.

The British culinary achievements of the 1970s: 1. Arctic rolls. 2. Chicken Kievs. 3. Erm… It doesn’t exactly scream ‘London needs a restaurant dedicated to this!’.

Hence, presumably, the hipsterfied approach of Exmouth Market’s Coin Laundry - an eaterie that takes the gastronomic output of a decade where people used bin bags as clothing, but tries to stop it being rubbish. Think prawn cocktails packed with meaty king prawns and festooned with ribboned spring onions, chips with a (surprisingly thin) curry sauce and juicy chicken kiev legs that manage to be seriously tasty despite a surprising devotion to a Bernard Matthews-esque crumb. Plus, the odd delicious, if slight head-scratcher of a dish - Ye Olde ‘rabbit balti pie and coriander sauce’, anyone?

Décor-wise, the odd formica table and mini TV displaying a ‘chicken kiev counter’ are overwhelmed by Victorian tiling and exposed brickwork so that the look doesn’t say ‘1970s’ so much as ‘generic hipster hangout’. Clientele ranges between bearded dudes pouring water from giant milk bottles, the odd middle-aged couple lured in by the exotic promise of vol au vents, and the occasional dayglo-jumpered teen who’s brought her mum along as if to say: ‘You’ll love this place, mum! They’re deliberately uncool!’

Unfortunately, it seems to be having a bit of an identity crisis. Its website claims it’s ‘a laid-back neighbourhood bar’. But on our visit, we were told that their licence meant we weren’t allowed to order a drink in the main street level space unless we also ordered a meal. Which is neither very ‘laid-back’ nor very ‘bar’ (although there is a dedicated drinking spot downstairs, which we rated much more highly). Same too for their insistence on table service. It feels unnecessary. Pointless. Almost archaic. Still, at least the latter quality makes it perfect for a ‘70s-themed venue.