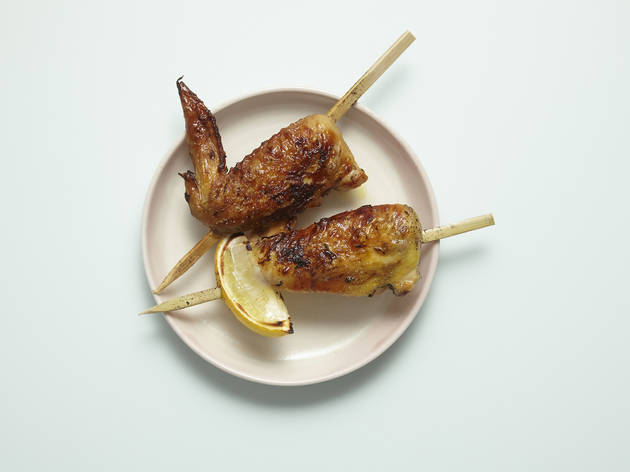 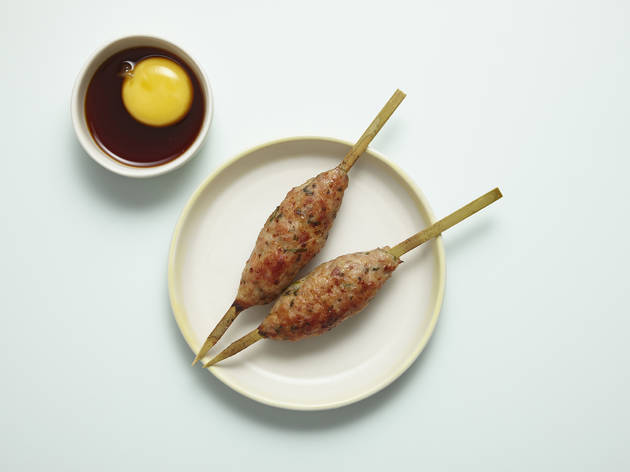 A Japanese yakitori restaurant from Brett Redman, the man behind Elliot's Café in Borough Market and The Richmond, in Haggerston.

We’ve all done it: had two too many beers and found ourselves wiping the chicken grease from our lips, regretting the wings even as we stuff them in. What is it about alcohol that makes you crave chicken? Well, as a far more advanced civilisation, Japan recognises this. Its izakayas – like pubs, but with better food and worse beer – serve up almost anything chicken-related on a stick. Juicy chicken hearts, chicken intestines (said to be wonderful for your skin) and chicken skin, are all given the skewer-plus-grill treatment. Essentially there to mop up the saké, they just happen to be really great bar snacks. Jidori, the new yakitori restaurant from Brett Redman has taken izakaya cooking and put it front and centre.

‘Yakitori’ literally translates as ‘fry chicken’ but there’s nothing Dixie about it. The chickens are free-range Goosnargh, hailing from Swainson House Farm in Lancashire. The closest you’ll get to yakitori’s Deep South cousin is the koji chicken – deep-fried chunks of thigh. It’s indulgent, to be sure, but the coating is dry and crisp – this is undoubtedly the best karaage I’ve had in London. Each skewer is very different; the wing with shiso and lemon was crisp, pleasantly sweet and a little sharp. The moreish tsukune skewers – packed full of chives – came with a raw egg to dip the meat into. There’s also a nice twist on English pub grub with a katsu curry scotch egg – the yolk runny, the coating crisp, the meat juicy: it was great. The negima brought back memories of Japanese festivals: the best thing about Jidori is how evocative the flavours are – everything tastes just as it would in Japan.

With a nice selection of craft beers – local and Japanese – plus a well-curated cocktail menu, the drinking element is more than taken care of. We really enjoyed our ‘Shiso into you’ (with a name like that, how could you not?), a spin on a classic sour: it was sharp and frothy, while the delicate shiso held its own against the alcohol.

Go with a group of friends, try as many dishes and drinks as humanly possible, and give Morley’s a miss on the way home.