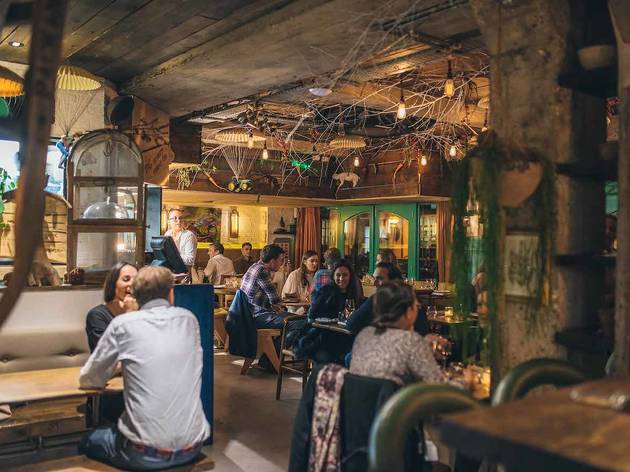 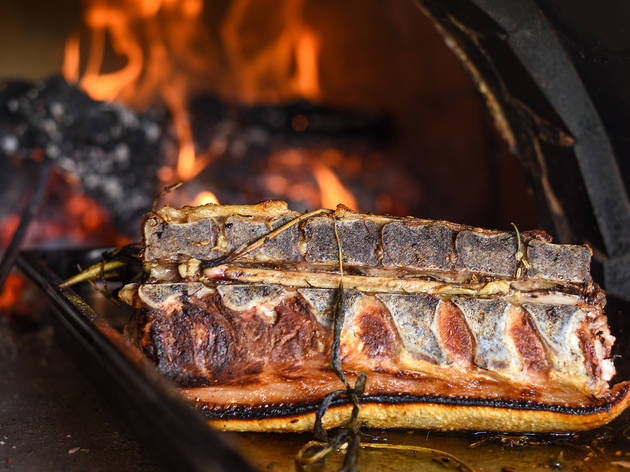 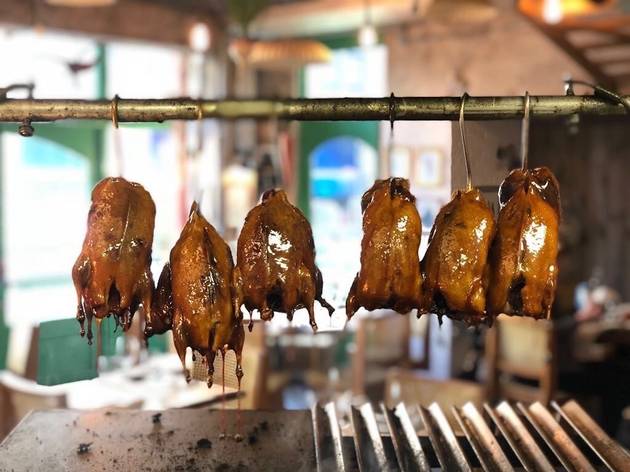 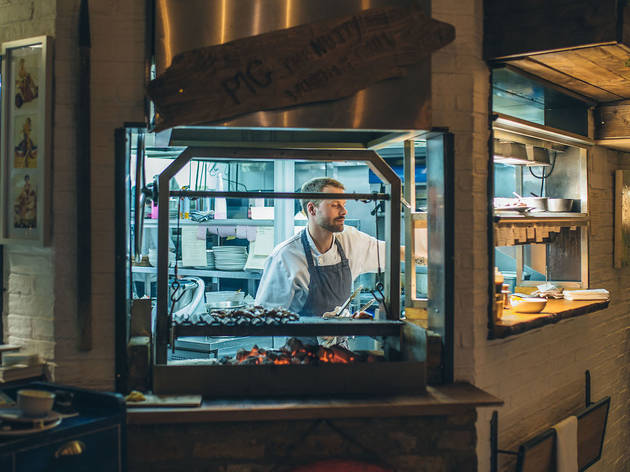 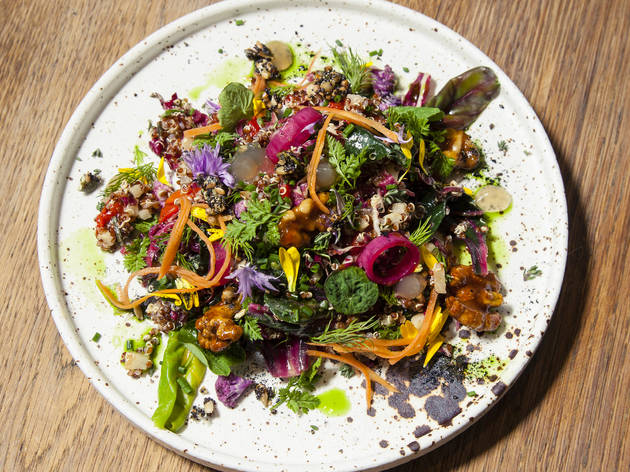 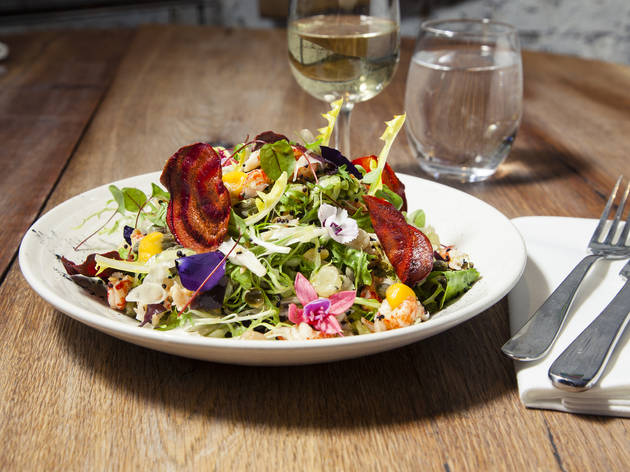 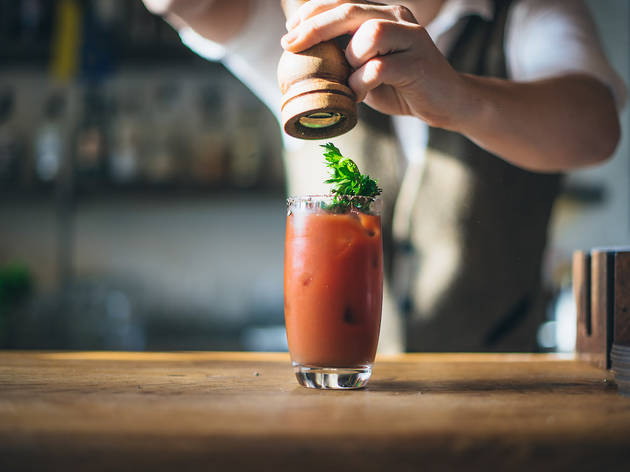 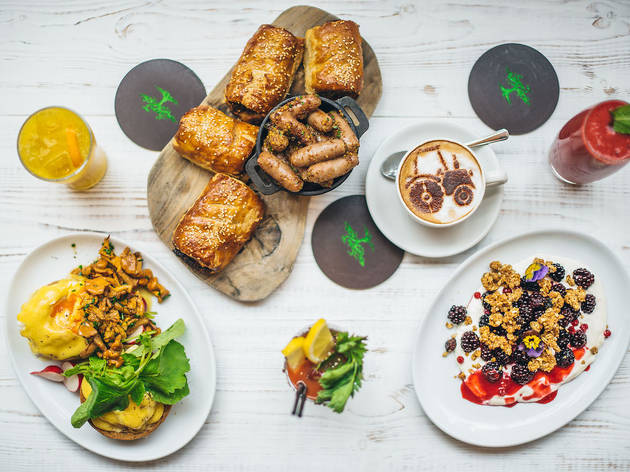 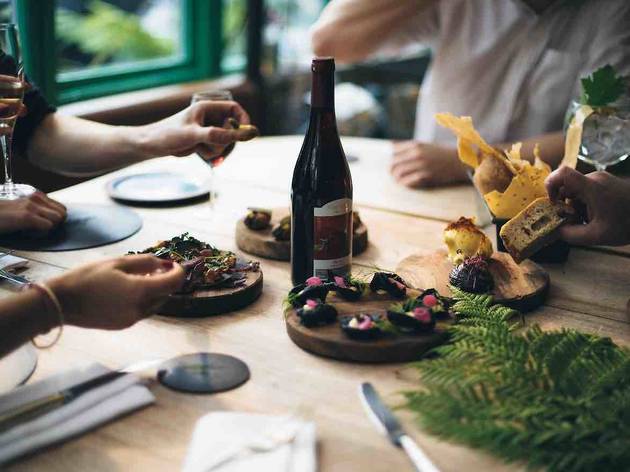 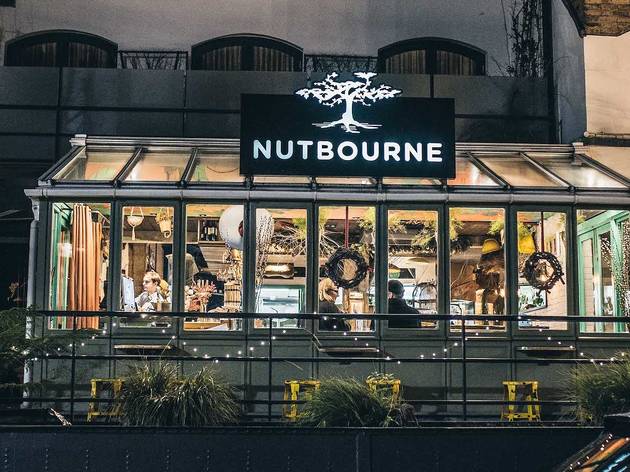 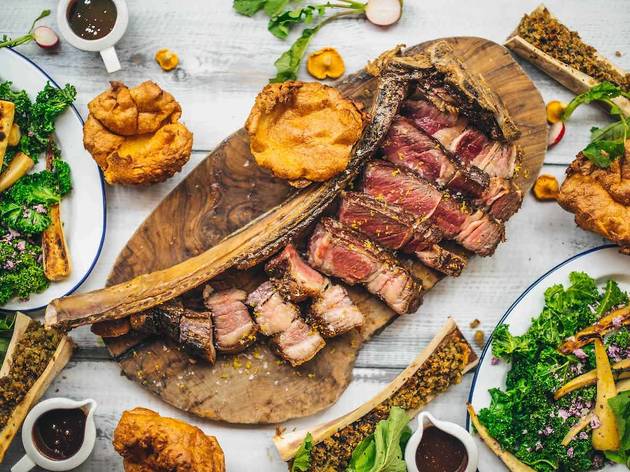 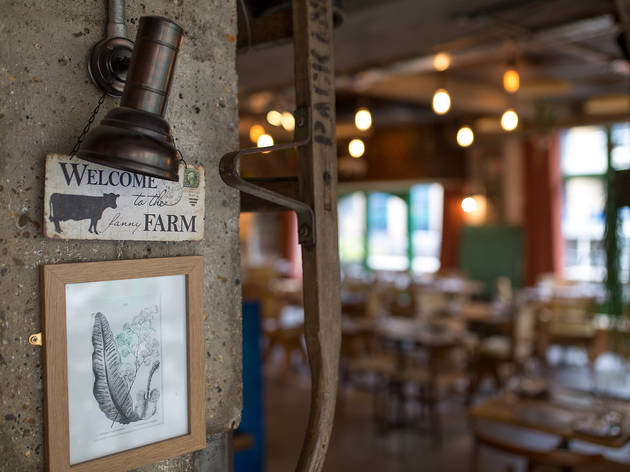 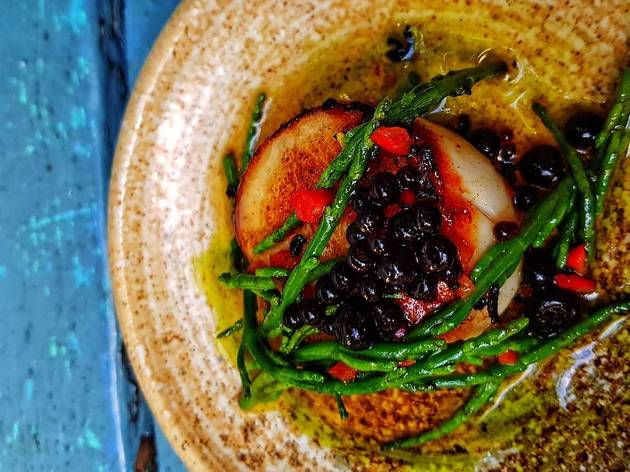 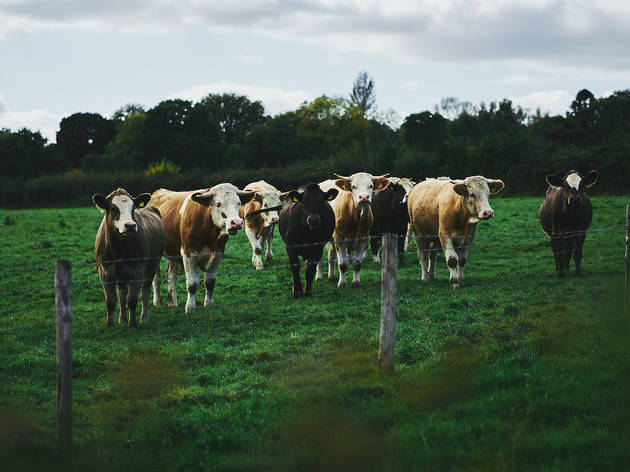 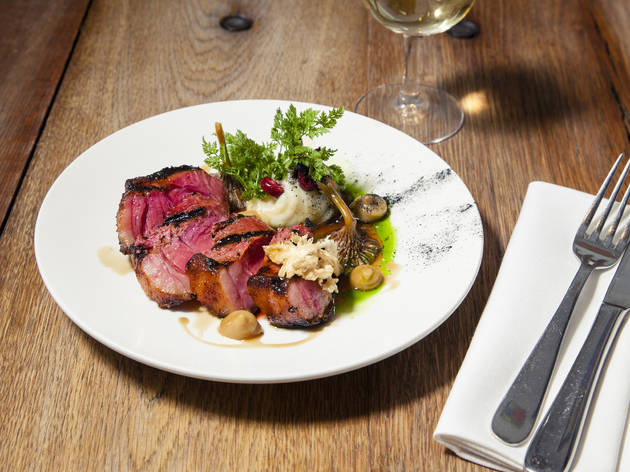 An all-day British brasserie from the team behind The Shed and Rabbit.

‘Farm to plate dining’. This has become such a ubiquitous concept, it must be due its own emoji. But at this Battersea restaurant, the description is actually legit. Almost every major ingredient, from the meat, fish and veg, right down to the award-winning wine, comes from one little patch of West Sussex called Nutbourne. If an ingredient does have to come from elsewhere (horrors!), then it’s either foraged, or sourced from another small regional supplier. The Gladwins – aka the trio of brothers whose farm it is – also own and run the restaurant. Yup, I’d say that was fairly farm to plate.

For those of you familiar with Nutbourne’s critically-acclaimed siblings (The Shed in Notting Hill, Rabbit in Chelsea), the set-up here is a little different. Out go the trendy small plates, in comes a more conventional set-up, organised around starters, mains and puds. There’s weekend brunch, Sunday lunch. The team are ruddy-cheeked and affable. It’s basically a best-of-Blighty all-day brasserie: jolly, rather than radical.

Pride of place in the open kitchen is a wood grill. The Gladwins are famed for serving top-notch meat and deservedly so: the beetroot-and-yoghurt-marinated pork steak was juicy, bouncy as a castle and full of flavour. It was also as tall as it was wide, which you’ve got to love.

But the real surprise? The salads. In the global league table of leaf-organisers, us Brits aren’t exactly the standard bearers. Songwriting, we can do. Acting, too. Salad? Not so much. But by lightly borrowing from other culinary styles, the Gladwins have taken our native ingredients and given them genuine oomph. Example: a tumble of shredded brussels sprouts studded with creamy cheddar and crunchy granola, then topped with slices of sweet, ripe pear. Result: a riot of a cheesy, nutty cabbage dish to convert brussels-haters everywhere.

Or my favourite, the British super-grain salad (they’ve called it a ‘tabbouleh’; it’s not really). A generous pile of snappy leaves – fennel, rainbow chard, endive – it also had plenty of fresh herbs and just a sprinkling of cracked wheat and quinoa from Suffolk. Sweetness, sharpness and bite came courtesy of wrinkly little golden grapes, slices of pickled red onion and a good splash of wholegrain mustard dressing. As salads go, it’s pretty special.

Nutbourne is the largest of the three Gladwin restaurants – it’s on the site once home to renowned neighbourhood hangout Ransome’s Dock – and while the large, wood-cladded room may lack the quirky charm of The Shed, or the intimacy of Rabbit, what it does have is plenty of space for groups and 40 dockside seats, which will shine when the sun comes out. Brunch, anyone?

Nutbourne says
Nutbourne Bar & Restaurant is located in Ransomes Dock on Park Gate Road, near Battersea Park. It is brought to you by the Gladwin Brothers, who present "local and wild" cookery.

The menu features British seasonal produce with an emphasis on wild, foraged, locally grown and sustainable produce from the Gladwin’s family farm. Dining is available on the terrace by the dock or in our cosy interior by 'Piggy', our wood-fired BBQ grill. Do join us for a drink in our cocktail bar before sitting down for your meal!

Nutbourne's menu focusses on flame grilling excellent cuts of high-welfare meat including Sussex beef, lamb, and pork from our family farm in West Sussex. Enjoy a special fare of seasonal game dishes such as partridge, mallard, and perfectly cooked venison.

We are open Wednesday - Thursday for dinner. Friday - Saturday for lunch and dinner. On Saturdays and Sundays, we serve a fabulous brunch menu from 10 am with Sunday afternoon guests enjoying an unrivaled Sunday Roast from 12 pm complete with the fluffiest Yorkshire puddings this side of the Thames!

Nutbourne is situated in a picturesque area, just a short walk from Battersea Park. We have a large, beautiful space with a wrap-around deck and a view of the river. Our restaurant is dog-friendly and plays host to many furry friends over the weekend.