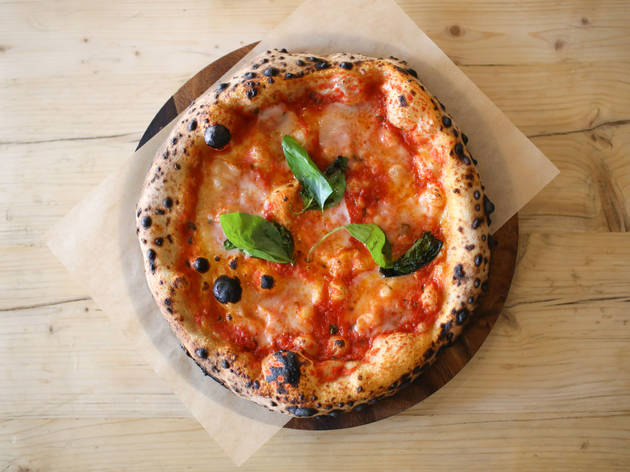 The London outpost of the UK’s first vegan pizzeria.

Are you vegan cheese curious? Step into Camden’s Purezza (Italian for ‘purity’). Its plant-based pizzas have terrific toppings, from smoked tofu to beetroot carpaccio.

It’s a modern, relaxed space with a definite buzz; ditching meat and dairy doesn’t seem to have deterred punters. And no wonder. The dough balls, for example, were sinful little spheres oozing Purezza’s convincing substitute – and then there was the impressive mac ’n’ cheese, which produced the same mixture of satisfaction, guilt and sweats as the regular stuff.

By contrast, the Neapolitan-styled pizzas were relatively ‘light’, thanks to fluffy, bubbly, chewy sourdough bases (or a hemp version with a nutty earthiness). Toppings showcased creative veg combinations, with a few cheese-style and meatier leanings, but things never got too stodgy. Take the Parmigiana Party, topped with rich aubergine pieces and lightly smoked ‘mozzarella’ (made from fermented brown rice milk), a sprinkling of nutritional yeast adding a moreish, salty hit. The only negative was the tofu sausage, or rather the lack of it.

Sometimes though, you just have to say: ‘To hell with it, I’m getting the Oreo Pizza’. What appeared had four on top, plus something approaching Nutella and something else approaching mascarpone, but really, it all just blended into one sweet gooey mess. ‘Purity’, it seems, doesn’t have to exclude good old-fashioned gluttony.

The BEST vegan pizza in London!

I’m not vegan but if all the food is that delicious I could be! We visited at lunch time so got a table really easily and the service was really friendly. The dough balls with “cheese” were just amazing as was the pizza, the truffle one was yum! Would definitely recommend.

The atmosphere is warm and inviting, the service is excellent without being too obtrusive, and the menu is interesting. As for the food: the dough is wonderfully chewy, although the pizzas tend toward mushiness toward the centre.

Although I love Purezaa Pizza and am so glad that it has made it's way to London. The reason the why I gave 3 stars is due to service. I was first asked what my name was and phone number then told it would be 20-40mins.... 15minutes later the same front of house staff told me to be patience and I had only waited two minutes and it will be 40minutes. All in all and over an hour later we got a table. I wont be going into Purezza if I see the staff member working, which is very unfortunate, I will have to head to the friendly staff of Brighton Purezza.

Just delicious! I got the Fumosa and subbed the aubergine for the beetroot carpaccio which the server was glad to do at no extra cost. The pie is a decent size for £10.95 and arrived loaded with toppings and drizzled with with a sweet BBQ sauce. It was also “cheezy”, making every bite full of smoked, rich flavour. I got the hemp sourdough base and was quite pleased with the chewy dough texture (and this is a snobby New Yorker here). The pizza even stood up well reheated from frozen the next few days. Would gladly return if in the area!

If you are vegan or not you'll love this place.  There is so many vegan pizzas only to be had you will be blown away by the choice.  You can also choose your own dough base be it sourdough, hemp or gluten free.

I went along and had for starters Courgetti Spaghetti which is courgettes sliced into spirals served with pesto and sun dried tomatoes.  The courgette spirals were even longer than a normal spaghetti stand so when it came to twisting on my fork it went on forever.  The whole taste did not disappoint either as it was very fresh and the pesto was really creamy, which surprised me as there is no cheese used to make the pesto.  In fact I don’t think I would be able to tell the difference from a normal cheesed based one to this vegan style one, that is how great it was.

For mains I chose Cheesus which came with four different vegan cheeses served on a tomato base. The ricotta was the best part about this pizza as there was large dollops of it everywhere and it really did taste like ricotta which is remarkable considering this vegan ricotta is made from nuts. However I was not that keen on the yellow vegan cheese as it was too sticky for my liking and very strong in flavour.  The sourdough though was perfect, light, thin, crispy, and had a fluffy crispy outer ring giving it that perfect crust finish.  Even though I did not like the yellow cheese on this pizza I would order this again.

For dessert I ordered the Chocolate Brownie which was sweet, sticky and had a great intense flavour of chocolate making it probably one of the best brownies I have had.

I would totally visit this chic modern restaurant again as the food was top notch and very fresh.

Next level pizzas. I'm not even vegan and the creativity and flavours on show here are seriously something else. Believe the hype - this is outstanding.

I've been vegetarian for several years but today, Purezza convinced me to give up dairy. HIGHLY IMPRESSED. The pesto is out of this world and the cheese they make tastes like normal mozzarella. The base of the pizza is outstanding, very light. I enjoyed the milkshakes. The vibe of the restaurant is great and staff are very welcoming. Will come back again soon!