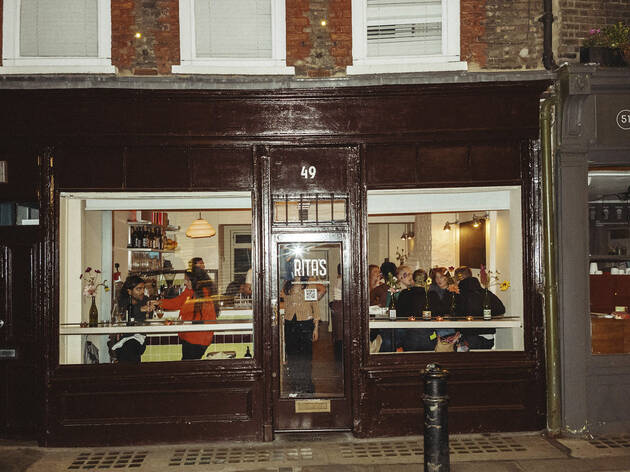 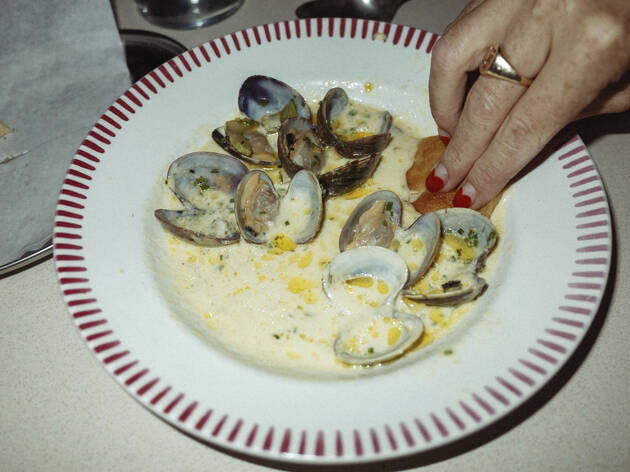 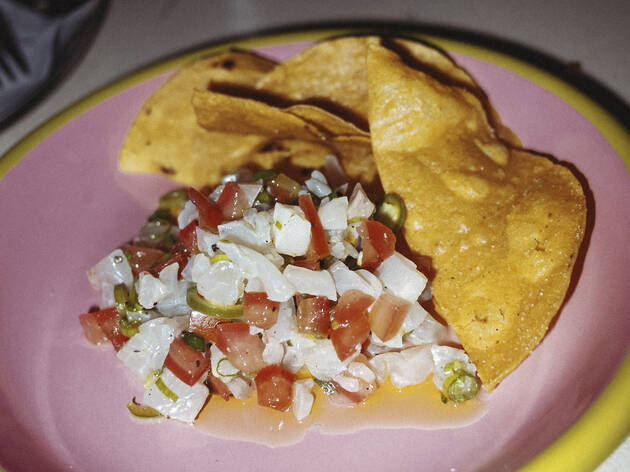 Chances are you’ve probably heard of Rita’s: co-owners Gabriel Pryce and Missy Flynn have been around the block for a decade. We’ve seen Rita’s here, there and everywhere in various guises, from a neighbourhood pop-up in Dalston to the sandwich-centred Bodega Rita’s in Coal Drops Yard. And now? They’ve made themselves at home on a plot of prime real estate in Soho bang opposite Andrew Edmunds.

On our Thursday evening visit, the place had barely been open for a week and it was already packed out with fashion types, after-work suits and late-night Soho revellers. We could see it all unfold from our counter window seats up-front: it’s a place to see and be seen. Interiors-wise it’s all super-cosy with diner-style red leather booths, wood furnishings, a rustic Mexican tiled bar and even a much-coveted central London enclosed garden space out back.

Things started with a trio of nostalgic starters that transported us back to happier, simpler times. The deliberately messy tear-and-share garlic bread that looked like a puffy mushroom pillow was a tad on the doughy side, but all was forgiven thanks to the oozing herb-butter topping, which contained so much garlic that you’re guaranteed no vampires will come within a five-mile radius of you. So brilliant, we immediately wanted another round, but I’ve learnt not to get too excited and fill up on bread. It was swiftly followed by a plate of crackly potato explosions, essentially chunky loaded potato skins, but far, far superior to the dry stuff you experienced as a kid at American restaurant chain TGI Friday’s. It invoked that same sweet childhood memory of having loaded potatoes for the first time: craggy, crunchy amber exteriors and fluffy floury centres served with a creamy sour cream and chive dip.

Next, the very retro devilled eggs with hot bean and sesame oil filling. Co-owner Missy, who was on top form expertly looking after the bar and front of house, told me, ‘The eggs are hit and miss. I don’t know why people are weird about eggs.’ My guess would be that people are still traumatised by Morrison’s viral sack of wet eggs, but there was absolutely none of that here. The rich egg yolk spicy-bean paste, fancy-nozzled back into egg-white halves was absolutely delightful. Consider this my official petition to make a case for devilled eggs.

Other things weren’t so thrilling. A catch of the day sea bass à la plancha, with black beans, ‘macha-pico’ salsa and warm homemade tortilla was slightly dry and needed more texture. I wished the fish was fried instead of being pan-seared. And for my veggie mate who was left with the spaghetti alla chitarra alla marinara (the only vegetarian option on the menu), she said it was decent pasta, but nothing to write home about.

As for our shared dessert, we had such high hopes for the key lime pie. But it was top-heavy and lacked structural integrity so it started to collapse after the first bite. The heavy circular crust needed to be bigger to act as a better foundation, and while the luminous bright-green lime filling packed a punch, it tasted slightly synthetic and was topped with a mountain of toasted meringue that overwhelmed it before disintegrating. My pal said it tasted like a lime Starburst and you winced at its sugary tartness. One piece between three was more than enough.

If you’re looking for a place to catch-up with pals in central London and want to watch the world go by with some superior snacks and a corker of a cocktail, then this is the place to be. Rita’s has cracked it with the American-style small bites, but the more inventive bigger dishes need some tweaking.

The vibe An American-inspired eating house for young, fun and welcoming people. Cool cats only.

The food Come for tear and share garlic bread. Stay for the devilled eggs.

Time Out tip? Sit by the front window near the bar and people-watch to see the antics of a Thursday night in Soho unfold before your eyes.