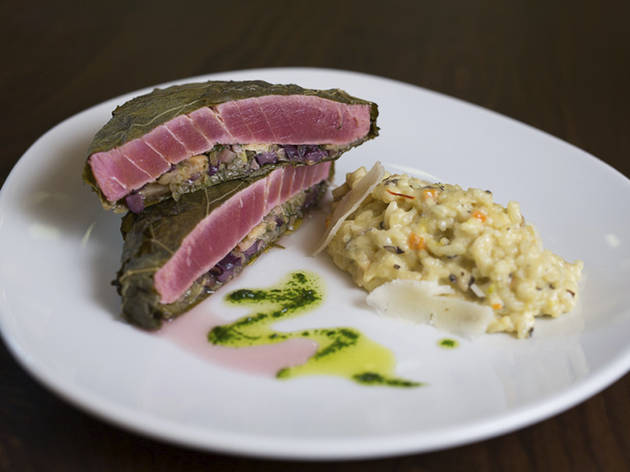 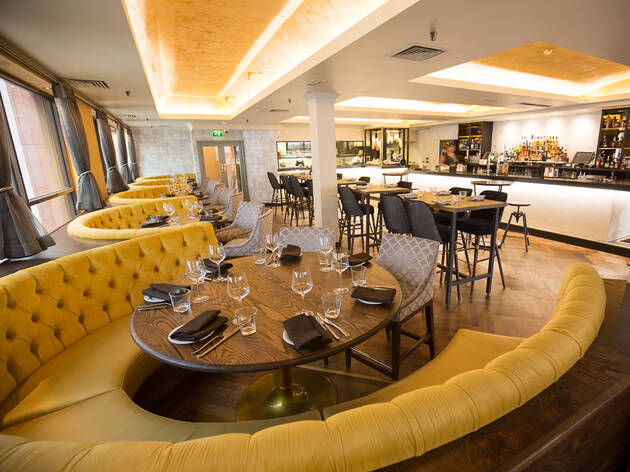 A City restaurant with an Ancient Roman theme (seriously).

Right, what can I remember about the Romans? They wore sandals, partied in coliseums, built a bloody huge empire and – here’s something my history GCSE didn’t mention – they could cook up one hell of a feast. Welcome Roma, a restaurant fit for an emperor in an area conquered by chains. This isn’t some gimmicky ordeal (don’t turn up in a toga): it’s a smart, city-slicker restaurant taking inspiration from the food and drink of ancient Rome.

Surrounded by an army of City eateries, Roma features gilded mirrors, mosaics and a bust of an emperor (which one, who knows – my history exam didn’t turn out well), leading up to a golden restaurant and wine bar. While the decor screams imperial splendor, the menus are much subtler in theme. Ask your waiter to talk you through the extensive wine list; it solely features vineyards that would have fallen within the Roman Empire. Those guys loved a bevvy after a hard day’s empire-building.

If you’re going to drink like a Roman, you have to eat like one too, which explains Roma’s banquet-style portions. A huge platter of cured meat was followed by a thick-cut, perfectly pink tuna steak, wrapped in vine leaves with sweet leeks and sharp olives, served with a creamy risotto. It’s one of the dishes that they cook in hay: an ancient technique that left the fish melting with moisture and earthy flavours. A side of samphire gnocchi soaked in parsley butter completed the feast, but probably wasn’t necessary. As for dessert, skip it (too heavy) and revisit that epic wine list instead.

The emphasis on seafood and slabs of salami make Roma a meaty alternative to the area’s many steakhouses. Arrive ready for a feast and ask lots of questions – you might just learn something.

Roma says
Roma is a new, unique concept restaurant and wine bar located by Fenchurch Station, bringing two-thousand-year-old flavours and passions of Ancient Rome to the heart of London’s modern city scene. The restaurant serves a rich menu of Roman-inspired dishes, as well as fresh salumi and cheese boards.