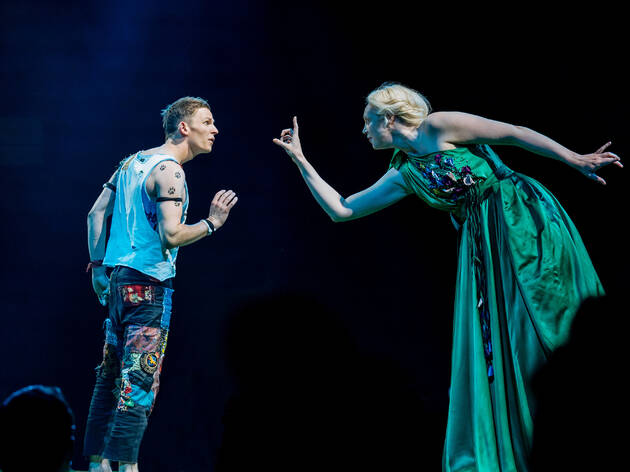 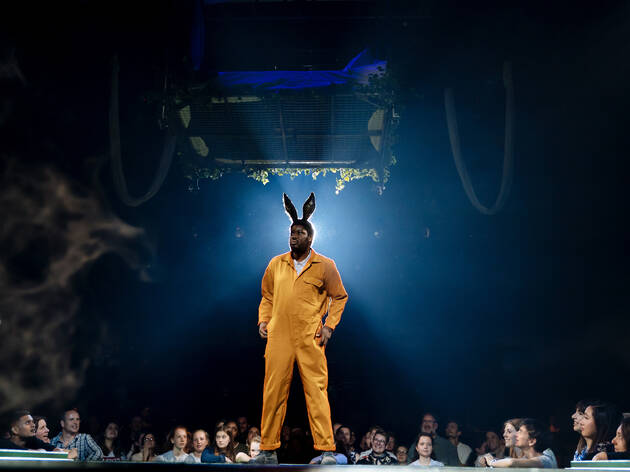 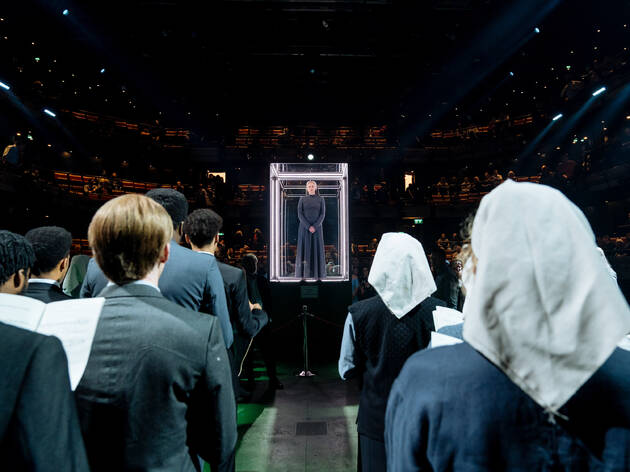 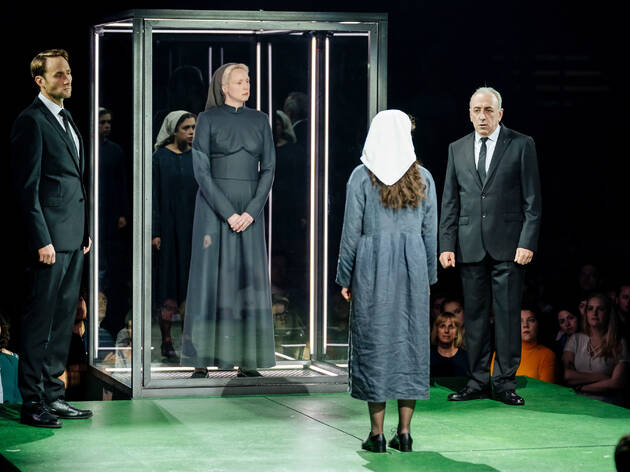 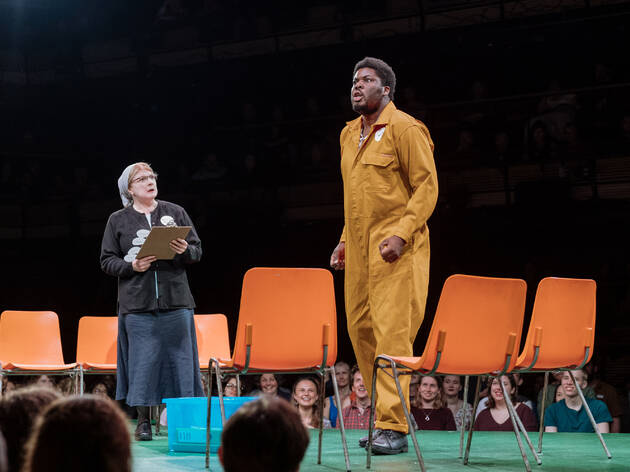 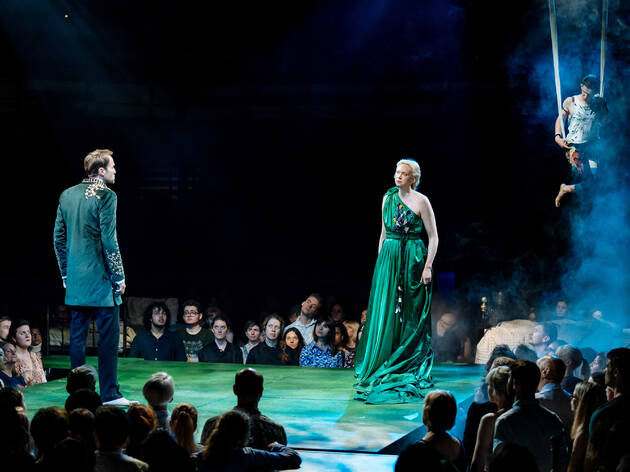 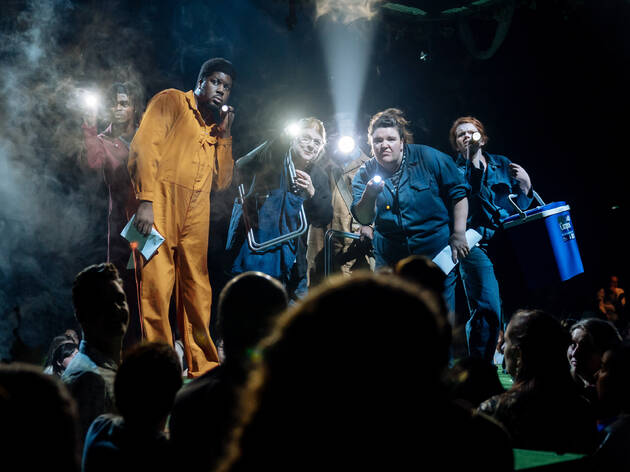 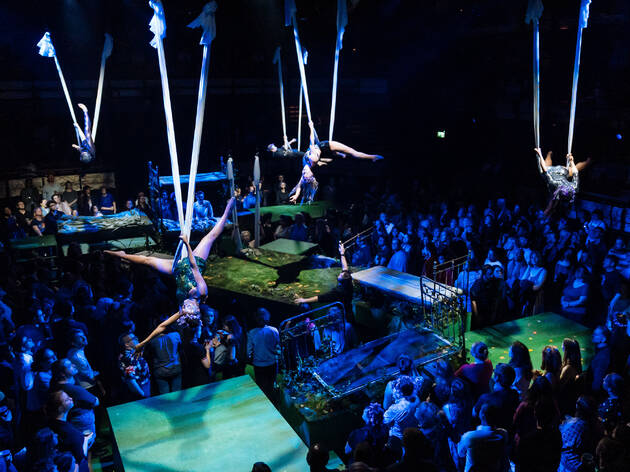 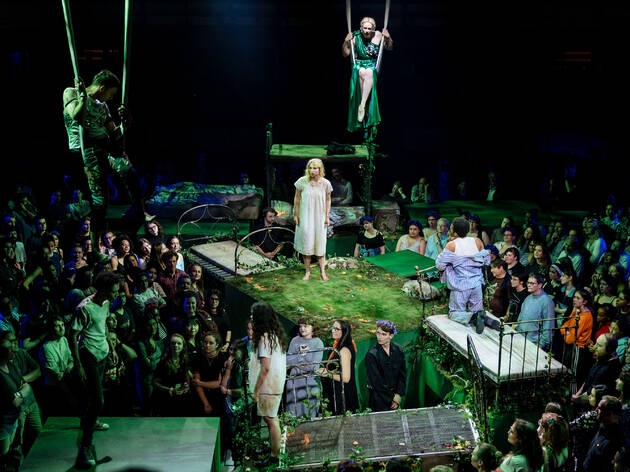 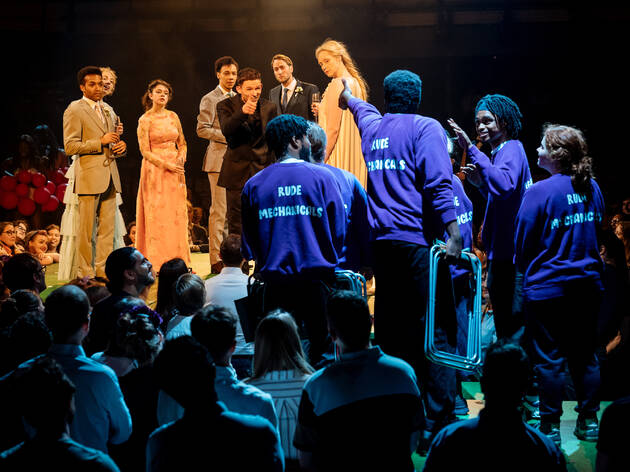 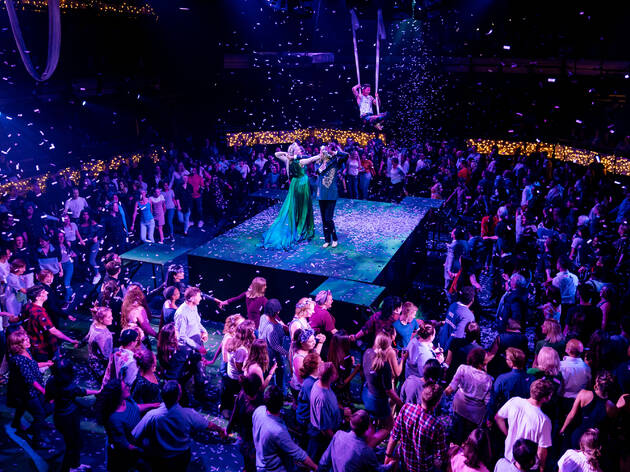 Nicholas Hytner directs a joyously OTT, genderfluid ‘Dream’ with a cast to die for

‘For fuck’s sake,’ mumbled a member of the Bridge Theatre crew as he sprinted past me. It was three hours since Nicholas Hytner’s production of ‘A Midsummer Night’s Dream’ had begun and it was unclear as to whether it had technically finished or not. But it probably had, as the unfortunate staff member was trying to retrieve one of the two enormous glowing moon balls that the audience was still furiously punching around the theatre. Meanwhile, to my right, the actual Brienne of Tarth was having a boogie. It’s quite possible that she’s still there now.

A weird dream? Nope: just Hytner finally tackling Shakespeare’s beloved comedy. Usually his modern-dress takes on the Bard are precise and revelatory, and certainly he applies *some* of his usual rigour here; but then there’s the feeling that he just got stumped by what is effectively a story about some fairies banging in a wood and decided that – screw it – he might gobble a couple of pills for inspiration (NB I am sure that Sir Nicholas did not actually do this). The results are messy, sprawling and quite glorious.

Integral to Hytner’s vision is the effective swapping of the roles of fairy king Oberon (Hytner regular Oliver Chris) and queen Titania (towering ‘Game of Thrones’ star Gwendoline Christie). They hold on to their names and genders, but the dialogue is mostly reversed, making it a story of how Titania and her servant Puck (David Moorst) get one over on sensitive Oberon by making him fall in love with Hammed Animashaun’s brilliant Bottom, a savant-ish weaver rehearsing a dreadful play in the fairies’ woods.

This has two effects. One, it very nearly creates a coherent through-thread. As usual, the actors playing Oberon and Titania double up as Theseus and Hippolyta, the Duke of Athens and his captive bride-to-be. Here, Hytner suggests that Hippolyta – literally held in a display tank – has magic powers (hey, it’s already a play about fairies) and that the bulk of the play is fact a dream of Theseus’s, as manipulated by Hippolyta/Titania (who seems to be explicitly the same character).

And two, it sets the tone for a riotously gender-fluid immersive production that generally feels like designer Bunny Christie’s main inspiration was Pride (it is that time of year). When Oberon and Bottom finally get it on, surrounded by dancing fairies, while Beyoncé (obvs) thunders from the PA, it is cheesy, silly, predictable, subversive and joyous.

There isn’t a huge amount to ‘do’ if you’re part of the standing audience, but there is something inclusive and fun about being in the increasingly giddy midst of it all, of being up close while various guilty pop pleasures blare away, and cast members leap out of the beds that surround us or descend from the silks above.

Even if you ignore all the bells, whistles and man-snogs, the fact of the matter is that Hytner has assembled a preposterously good comedy cast. For me, Animashaun’s guileless, enthusiastic Bottom was probably man of the match, but Chris’s sensitive Oberon, Christie’s ethereal Hippolyta/Titania and Moorst’s twitchily anarchic Puck were all tip-top, as were the marvellously detailed smaller performances from the fairies, lovers and Mechanicals. It is quite something when a production can have an actor as good as Felicity Montagu – aka Alan Partridge’s PA Lynn – in the relatively minor role of a luuvie-ish take on the Mechanicals’ leader Peter Quince. But she’s funny, and having fun, and so are we.

This production is probably not going to seriously alter how anyone does this play. With the best will in the world, it is probably a bit too long and overstuffed with ideas. But those are dry observations, after the event. In the moment, as the whole thing sort of collapses into a massive cast-audience dance party – complete with giant moon balls! – it’s a real wrench to remember we can’t just hide out in these woods for ever.