Richard Gresham is mad as hell… and he’s not going to take it any more. The 52-year-old – who sells theatre advertising – has secured some notoriety as the mastermind behind Theatre Charter, a voluntary code of theatre etiquette that’s caused ripples for its stringency – one ‘pledge’ is to pre-unwrap your sweets before sitting down – and its suggestion that London audiences have gone to the dogs.

‘I think behaviour in the theatre has noticeably declined in the last two to three years due to the new generation of mobile phones,’ he says. ‘People feel they have to be in contact all the time: phones buzz all night from Twitter.’

What he wants, he says, is a debate on the subject with bigwigs in Theatreland, including the influential Society of London Theatre (SOLT), to see what can be done – for instance, making a pre-show announcement to turn phones off compulsory. But despite his campaign having its supporters – an encouraging Tweet from Stephen Fry brought it to wider attention – the industry has cold-shouldered him: ‘if they tell me there’s nothing that can be done and that I should go away, I will’, he sighs. ‘I just don’t understand why they won’t speak to me’.

‘Society of London Theatre believes that those attending a live performance should be considerate to their fellow audience members and performers as electronic devices can cause unnecessary distraction and disruption.’

Few industry types made official comment, but Amber Massie-Blomfield, erstwhile head of communications at the Albany Theatre, wrote a widely-circulated blog saying why her theatre had rebuffed Gresham’s efforts to sign them to the Charter. ‘There’s a danger of the industry of coming off as stuffy,’ she says now. ‘Our priority is to increase accessibility and the Charter is at odds with that.’

Should tolerance have its limits, though? In August, Benedict Cumberbatch made an impassioned plea after a performance of ‘Hamlet’, asking his adoring fans to use their mobile phones to film him… begging them to stop filming him on their phones during performances. The message duly went viral, spawning a second grassroots anti mobile phone campaign. 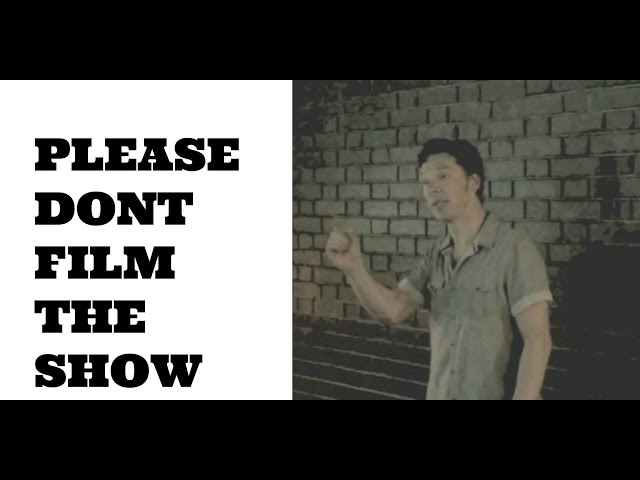 The Cumberphone Campaign, as it is genuinely known, is a collective of actors who had planned to launch some sort of humorous awareness campaign but were inspired to do something more after ‘Benedict’s little stage door soliloquy… it felt like a touchpaper had been lit.’

They’re a bit wary of Theatre Charter – ‘we understand why many people find the very notion of ”etiquette” off-putting and exclusionary,’ says a spokesperson – but have come to broadly the same conclusions: that theatres ‘seem stuck in the first era of mobile phones’, unable to deal with the constant, low-level intrusion of push notifications. Cumberphone’s solution is to promoting the sharing and creation of humorous anti-phone messages to ‘nudge’ audiences and theatres into ‘best practice’. I hit a brick wall of bland press statements when I attempted to press the industry: Julian Bird, chief executive of SOLT said: ‘Society of London Theatre believes that those attending a live performance should be considerate to their fellow audience members and performers as electronic devices can cause unnecessary distraction and disruption.’ No kidding. And a spokesperson for ‘Hamlet’ merely said ‘the company… have nothing further to add on this matter.’ Cheers guys!

Are we living through a crisis? It does seem that every advance in mobile phone technology ushers in a new world of potential dickishness. But it’s not my experience that theatre is being ruined. As with anything in life, try not to be a douche when you go to the theatre – and be aware that the person siting next to you may well be plotting an elaborate campaign to switch off your phone.

Do you think mobiles in the theatre are out of control? And if so, what can be done? Let us know below.

A brief history of mobiles in the theatre

The late, great Richard Griffiths breaks character in a production of ‘The History Boys’ to order a man out whose phone went off six times. Broadway star Patti LuPone becomes a cult hero after stopping a performance of ‘Gypsy’ to confront a member of the audience taking flash photos.

Kevin Spacey takes phone rage to new heights during a global tour of ‘Richard II’ that sees him shout at phone users in character, and even shine a laser at noisy rustlers.

A man makes global headlines after he gets on stage to charge his phone in one of the (unpowered) wall sockets in the Broadway show ‘Hand to God’.

Members of the Broadway community call for a boycott of US phone giant AT&T when it issues an advert encouraging customers to watch sports on their phones during plays.