My Account My Profile Sign out
My Account
Search
Worldwide Europe United Kingdom England London ‘I’m something of an assisted suicide nerd’: actor Liz Carr on the return of her satirical show
Advertising

You made your name as a comedian and actor. What made you decide to make a musical?

‘I made a BBC World Service documentary where I went round to all the countries where assisted suicide was legal. But I’m also a cabaret and stand-up performer. And I just wondered – could I combine the two worlds to make a piece of theatre? It’s taken six years to make a version I’m really proud of. I guess I’m something of an assisted suicide nerd, so it was really difficult to put across all the research and viewpoints I’d collected in a traditional musical. So now it’s less a musical, more a TED talk with showtunes.’

Six years ago, making a musical about a serious medical issue would have been a really weird thing to do. But since then, Bryony Kimmings has made a musical about cancer at the National Theatre. What’s the reaction been?

‘There’s something about comedy and music that just opens a subject up. People will ask me what I’m doing and I’ll say “I’m in the middle of ‘Assisted Suicide: The Musical’” and you feel that tension. One woman said to me “Well that’s a bit of a conversation-stopper, isn’t it?” But actually no, I think the aim of it is – it’s a conversation starter. Probably the most controversial thing about it is the title. Whatever people believe, and wherever they sit on this issue, it’s not meant to offend.’

Suicide is an emotive subject. How careful are you in the way you handle it?

‘I was really angry at how TV in particular handles the subject. There are really strict guidelines around suicide, and how it’s reported. But you call it assisted suicide or assisted dying and that doesn’t apply anymore. So we’ll see live suicides on TV – people going to Switzerland and going through with it – and I think that’s madly irresponsible. We need to give other options, like palliative care, more airtime. And we’ve been really careful to support audiences to talk about death. Because to be honest, I think assisted suicide just kicks into our fears of the unknown, our fears of pain and suffering. We want to have some control over something that’s uncontrollable.’

Disabled-led theatre companies like Ramps on the Moon and Graeae have been hugely successful in 2016. But is life for disabled artists improving?

‘I think it’s been a really exciting year, and there have been more opportunities. But we need more regular roles. Yes, why not be Lady Macbeth in a wheelchair? But we also need more shows that represent disabled people’s ordinary lives. I went to the world of theatre because I hadn’t seen anything that represented my world view. Sometimes you have to make your own opportunities, and more and more disabled people are starting YouTube channels, doing DIY films... But getting on the big TV channels, that’s a lot more inaccessible.’

You’ve had a regular role on ‘Silent Witness’ since 2013. How ready were they to work with a disabled actor?

‘They weren’t really ready at all. I remember that the viewing gallery for the autopsies was upstairs, and they had no ramps, so I’d be hoiked up by the crew. Now after five years there’s a massive ramp, and it’s even anti-slip, so we’ve come a long way. But there are other issues with working in TV: for example, they might not be sure what you’d need for working on location, so they’re averse to doing it. It’s the sort of fear that surrounds disability, in TV and film and theatre. So you’ve got the practical challenges, but you’ve also got to break down that fear or ignorance as well.’

I noticed you’ve spoken out about disability rights in the context of the Tory Government cuts to benefits, too.

‘We need to keep the pressure up and make the government accountable all the time. I feel really passionate about that. I’m quite idealistic, despite the darkness of my humour, and I’ve always been speaking out, it’s just that I’m better known now. I’m trying to use whatever power comes with being on TV or in theatre for good, not evil.’

‘Assisted Suicide: The Musical’ is at the Southbank Centre on Wednesday January 18. 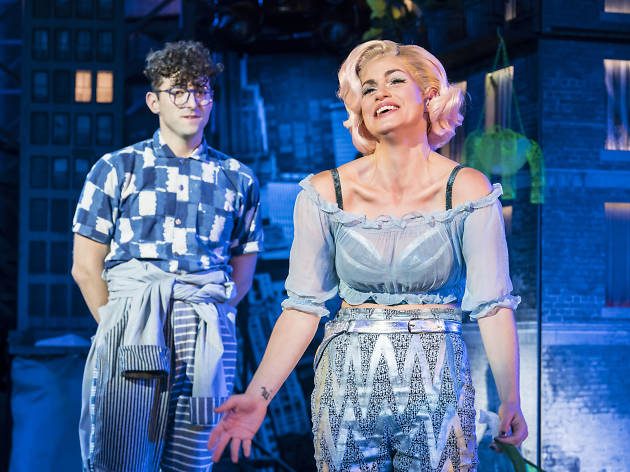 Not sure whether to shell out for that show? Find out what our theatre team made of London's new openings.