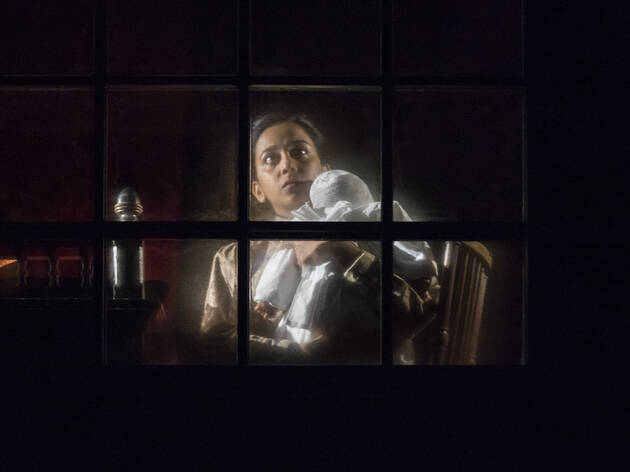 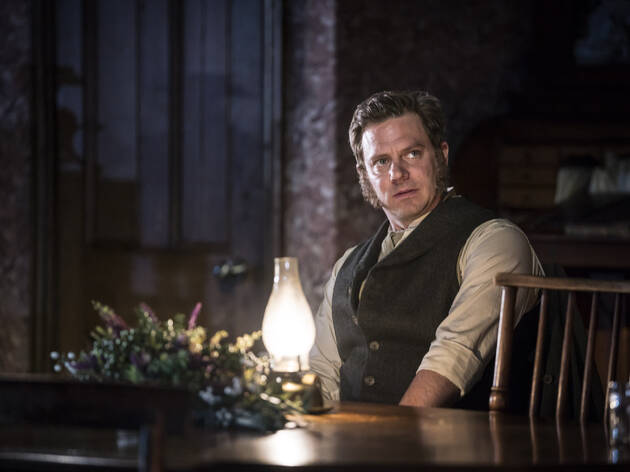 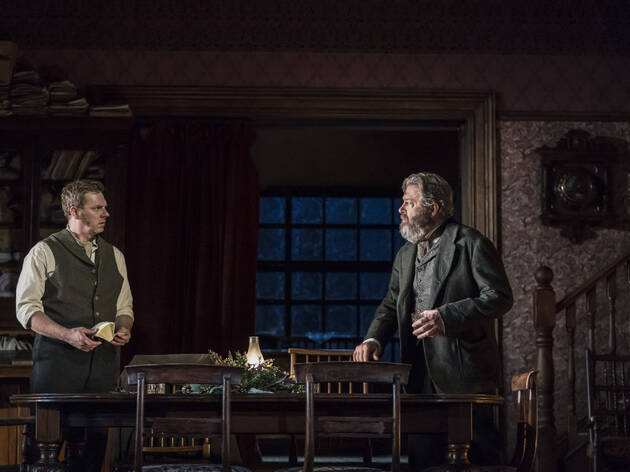 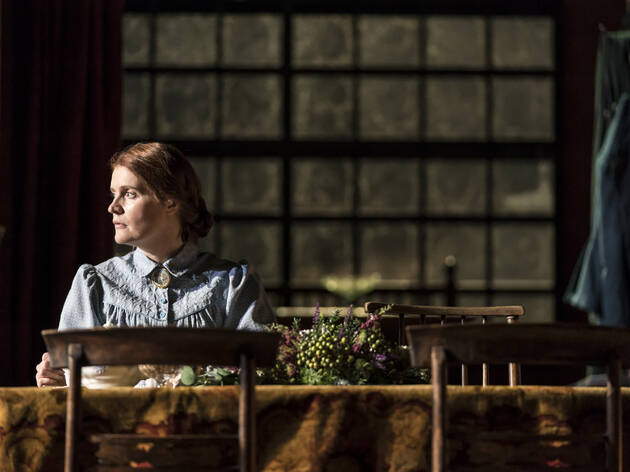 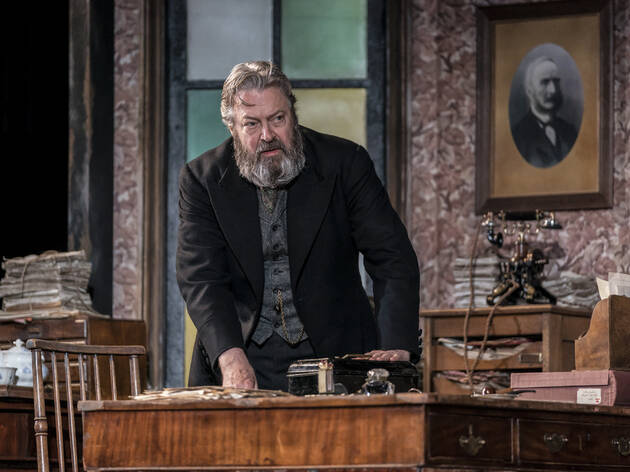 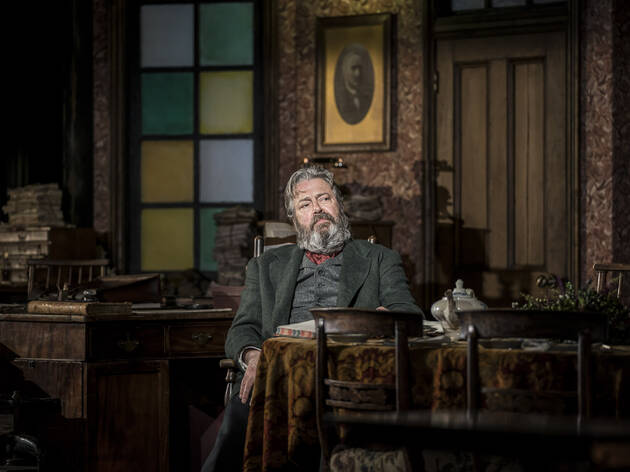 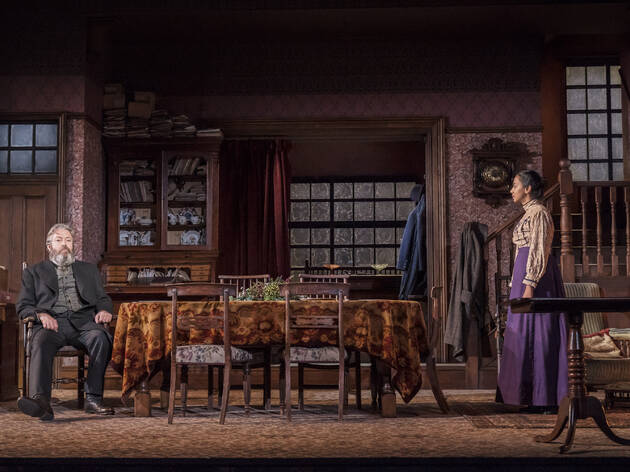 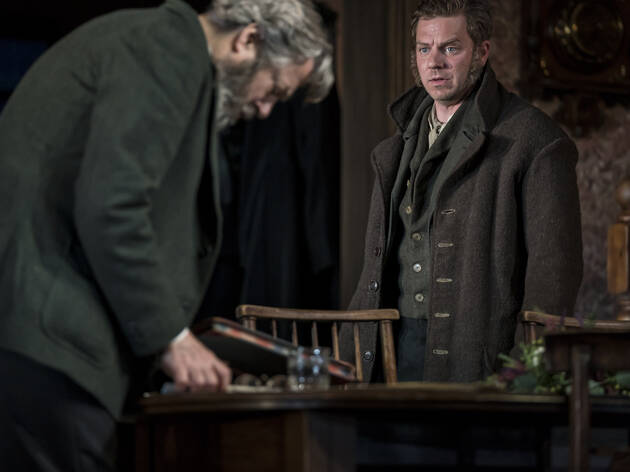 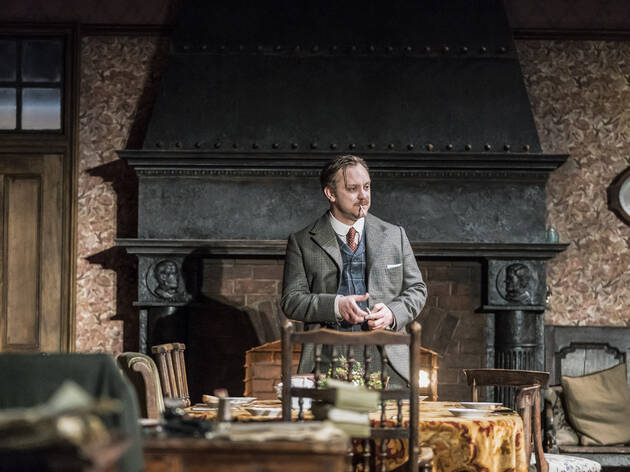 A tip for watching Polly Findlay’s revival of Githa Sowerby’s classic 1912 play: get there early. Some of the most spectacular stuff happens in the pre-show, where a huge screen of very cold-looking artificial rain plummets torrentially from the ceiling, while up in the gods a sextet of female singers perform polyphonic northern folk-style songs.

Behind the cascade, we can discern the rest of Lizzie Clachan’s set: the solidly well-to-do home of domineering north-eastern glass magnate John Rutherford (Roger Allam). As the play starts, Rutherford’s sister, Ann (Barbara Marten) takes her seat at the front of the stage, which starts to move forwards implacably. She looks for all the world like the prow of some ancient ship, threatening to crest right through the front rows of the audience.

It is a spectacularly dramatic opening for a first act that isn’t exactly bubbling over with drama, as Sowerby fastidiously sketches out the players in Rutherford’s stultified household: his granite-y sister; his three cowed children, who have expensive educations and crushed self-esteem; daughter-in-law Mary (Anjana Vasan), the wife of feckless son John Jnr (Sam Troughton); and Martin (Joe Armstrong), Rutherford’s trusted foreman, who is surreptitiously having a relationship with his boss’s only daughter, Janet (Justine Mitchell). (Theatre nerds will note that, yes, Findlay has reunited Mitchell and Troughton, the romantic leads of her recent NT hit ‘Beginning’, as brother and sister.) And then there’s old Rutherford himself: a bearded Allam looks hewn from the rock itself, and while he has his human side, he is also implacably driven, and utterly unsentimental.

The second half is where it all kicks off. Sowerby is too canny a writer to make this a simple tragedy, but with all her pieces now in position, what we see is Rutherford’s systematic shattering of his kids’ self-esteem coming brutally home to roost. One by one his broken children are driven away – for us it’s painful, for them agony, while Rutherford seems almost indifferent. Troughton and Mitchell are particularly good: he takes on a sort of fey hysteria as his dreams of being accepted as his father’s equal are crushed, while she is a picture of pain as she is simply removed from the household.

Sowerby’s play is an indictment of patriarchal, transactional, status-obsessed, class-ridden society, but is also an acceptance of it. The only two characters to make it through the maelstrom intact are the only two who can master their feelings and play this game for what it is.

Sometimes Findlay’s production feels a bit plodding, straitjacketed by period detail. But her exemplary cast vault most of the hurdles. And a big shout-out to dialect coach Daniele Lydon: to these Midlands ears the old-fashioned north-east accents are pretty much note-perfect; in a world in which actors still tend to default to something like RP (especially in period dramas), the accents here give everything a surprising freshness.

It plods, occasionally. But like the production of Caryl Churchill’s ‘Top Girls’ it’s running in rep with, Findlay’s atmospheric take on ‘Rutherford and Son’ is a cult-ish classic by a female playwright finally given the blockbuster production it always deserved.