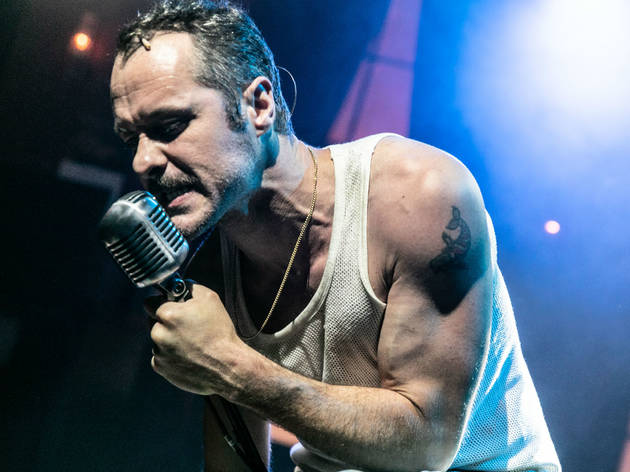 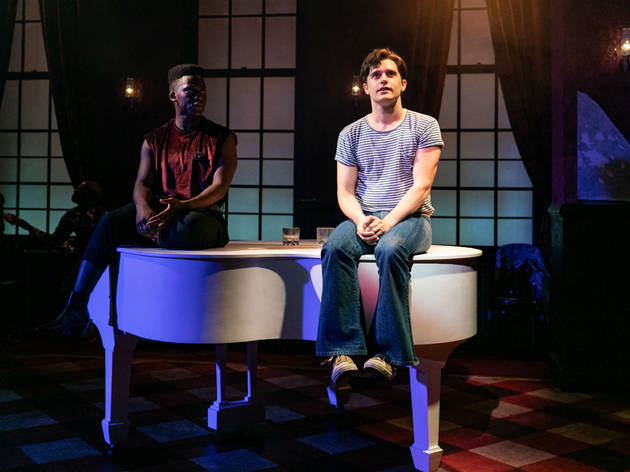 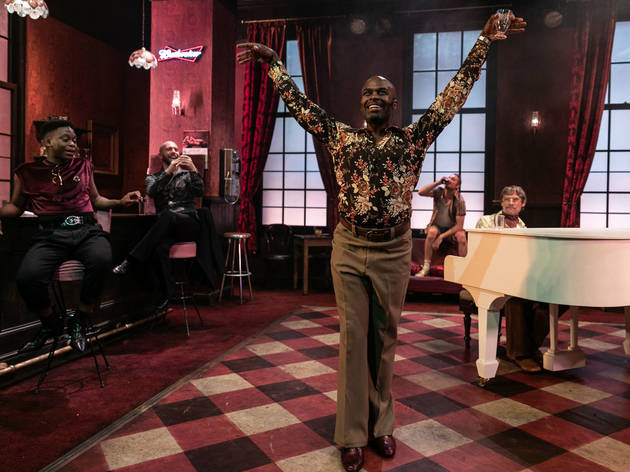 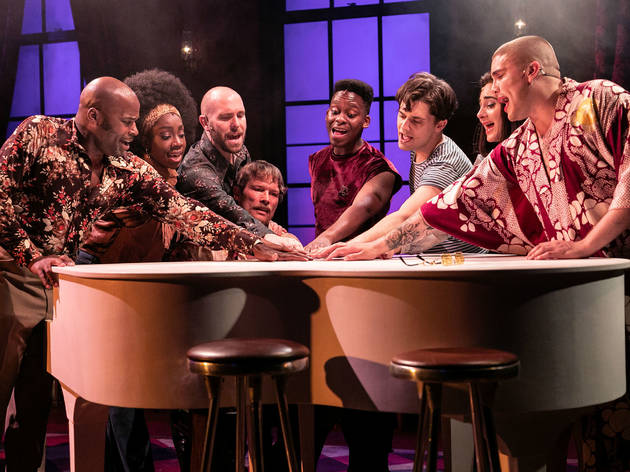 The horrific mass shooting in the Pulse nightclub in Orlando, Florida in 2016 filled headlines as the biggest single attack on LGBTQ+ people in US history. Far less well known is the incident it grimly superseded: an arson attack in New Orleans in 1973 that saw 32 people die in the UpStairs Lounge. This is the setting for American writer and lyricist Max Vernon’s new musical ‘The View UpStairs’.

The show, making its UK debut at Soho Theatre, opens in time-travelling ‘Life on Mars’ (the TV series) style. In 2019, queer fashion designer and social media ‘influencer’ Wes (Tyrone Huntley) impulsively buys a ruin of a building in New Orleans. He trips in its abandoned, top-floor room. When he comes around, it’s now a busy bar in the early ’70s and he’s surrounded by its startled, wary patrons.

The conceit is paper-thin and never explained. But that’ll only bother you as much as you let it. It’s really an excuse for Vernon to bring Wes’s sometimes shallow, hashtag-tastic twenty-first-century queer sensibilities – built on buzzwords and followers – into collision with the brutal homophobia of the 1970s. ‘The View UpStairs’ doesn’t shy away from the damage inflicted on LGBTQ+ people at a time when the word ‘queer’, hurled as a slur, could ruin lives.

Huntley imbues Wes’s slick, ‘Drag Race’-style sass with enough vulnerability to cut through the script’s occasionally overplayed digs at the glibness of young LGBTQ+ people today. He’s good at conveying Wes’s lurking fear of loneliness and failure while spinning a funny line sharply. And his relationship with Andy Mientus’s sad-eyed dreamer, Patrick, is a nice, not-too-sweet centre to the show.

Vernon spotlights a community formed in adversity. From Puerto Rican drag queen Freddy (Garry Lee) and his mother, Inez (a scene-stealing Victoria Hamilton-Barritt), to the bar’s lesbian proprietor (Carly Mercedes Dyer, who elevates a raised eyebrow to an art form), Vernon sketches the characters’ fractious but deep ties in deftly broad brushstrokes. John Partridge (best known for ‘EastEnders’) gives a strong performance as Buddy, a closeted pianist with a wife and kids whose deep bitterness at an earlier career derailed by rumours inflects everything he says and does.

Declan Bennett, meanwhile, stands out as prostitute Dale, overlooked by everyone else. Never quite making eye contact, constantly shifting from foot to foot, he gives a stingingly raw portrayal of a traumatised, troubled man, whose lifetime of abuse and neglect has (it’s strongly implied) tragic consequences.

The music is a varied, invigorating fusion of tinkling ivories, disco and funk, married to the propulsive rhythm of Fabian Aloise’s choreography. Director Jonathan O’Boyle opens languidly on Buddy and builds up the tension. Characters often retreat to their corners, only to come together in ensemble numbers powerfully sung by the cast.

‘The View UpStairs’ is sometimes too on the nose. But it’s also funny, moving and, crucially, angry with a ferocity that slams together ‘then’ with a Trump-divided ‘now’, with LGBTQ+ hate crimes increasing, as a reminder that what is hard-won can easily be lost.