Did you know that London is the world’s largest urban forest?

London is a forest. No: literally. More than a fifth of the capital is trees. We dig into what that means

London’s skyline is soaring. Sometimes it feels like the only things growing in this city are towers of glass, steel and concrete. Look closer, though, and you’ll find something else putting down roots and scaling heights around town.

Our capital is full of trees. In fact, while it might not always seem like it, London is so packed with foliage that it’s technically a forest. That’s according to a United Nations definition that states that a forest is anywhere that’s at least 20 percent trees. London’s a respectable 21 percent.

While that doesn’t quite put the city in the same bracket as the Amazon, it leaves us competing with Sherwood and the New Forest – places that are considered to be pretty leafy. There are a massive 8.4 million trees across the capital, nearly one for each of us 8.6million Londoners.

Wind back the clock a few centuries, and London was a smaller city surrounded by countryside, including hefty areas of woodland. South London’s Great North Wood (the reason for place names like Norwood and Forest Hill) once stretched from Croydon to Deptford. What’s now Heathrow airport was a tiny corner in a heathland landscape of trees, grass and heather spanning from Hounslow to Hillingdon.

Precious pockets of this ancient woodland still survive: Highgate, Queens and Coldfall Woods in north London; Sydenham Hill, Oxleas and Lesnes Abbey in the south. All boast old, gnarled and characterful trees; oaks, hornbeam and some rarities, like the wonderfully named wild service tree. According to urban forest myth, its edible berries were used by the Romans to flavour beer.

But it’s not just actual woodland that makes London a forest; it’s everything else. Unlike some other cities – Paris for example – London has a wealth of trees and greenery right in the heart of the metropolis. Think Hyde Park or Regent’s Park for starters. Or Hampstead Heath, Richmond Park and Clapham Common further towards the capital’s edges. Then there’s the land around estates, private gardens, London’s iconic squares, 900,000 street trees, and raggedy ‘edgelands’ like railway embankments and road verges too. In fact, a whopping 47 percent of this city is made up of green and blue space.

The plants that make up London’s urban forest is important. Trees soak up pollution: nitrogen oxides, ammonia and sulphur dioxide are absorbed through their leaves, bark and roots (important, for a city that’s swamped by toxic levels of the stuff). They’re also prizefighters in the battle to keep global warming at bay, absorbing carbon dioxide and turning it into carbon. It’s no wonder that 109,077 people signed a petition to get the government to discuss restoring nature on a massive scale to help stop the climate breakdown in parliament. ‘Rewilding can draw millions of tonnes of CO2 out of the air through restoring and protecting our living systems,’ argued campaigners.

But trees’ impact on our wellbeing is even greater than that. A study released in June showed that just a two-hour dose of nature every week significantly increased people’s mental and physical health. And while it can be easy to fall into the trap of thinking this means mini-breaks in the Lake District, it turns out that even short trips to city parks can boost people’s mood for up to four hours afterwards. And that’s not even mentioning the joy of sitting under a cooling canopy on a hot day (though that might feel rather distant in our current chilly weather).

As we head into the darker, colder months of the year it can be easy to feel like the nature around us has disappeared. In fact, the opposite is true. November is the start of tree-planting season. This year that’s happening across the city thanks to a ballot running as part of National Tree Week, gifting trees to individuals and groups. In 2018, the same project led to 90,000 trees being planted around London. It’s not the only project. There’s Trees for Cities, who plant trees around town. In east London, the Tree Musketeers look after Wick Woodland on the Hackney Marshes and have a nursery for growing trees to plant.

In fact, each London borough has a department responsible for the trees in its parks and on its streets. Some are doing a better job than others. ‘We’re always looking for places to plant more trees,’ says Greg Packman, Islington’s senior tree inspector, an urban forester working in London’s most densely populated borough. His job involves maintaining existing trees as well as planting new ones. As a result, inner-city Islington has managed to build 25 percent tree canopy despite having fewer parks than most boroughs. Packman wants residents to play an active role, too. ‘More opportunities are needed for the public to get involved with looking after trees,’ he says, ‘if we are serious about increasing the tree canopy.’

Xanthe Mosley of Street Trees for Living, who plant trees in roadside spots across Lewisham, agrees. She says: ‘Getting people to water young trees in the summer is our priority.’ Her organisation finds sponsors and organises volunteers to look after trees. Mosley reveals some impressive stats. ‘Early next year we will plant our thousandth tree in just five years,’ she says. ‘Next year, we’re focused on planting trees near schools.’ Street Trees for Living also has an enviable track record when it comes to nurturing saplings: just 5 percent in their care fail, compared to 30 percent of those planted by the council.

So, remember: from the small patch of green outside your flat to the wild scrub behind your local pub, the splashes of nature across the city add up to a massive, successful ecosystem that’s helping to sustain our lives. London’s a forest and it’s time we gave our trees some respect.

Paul Wood (@thestreettree) is the author of ‘London Is a Forest’ and ‘London’s Street Trees’. He also leads guided tree walks. His next is in Ravenscourt Park on Sun Nov 17 with museumofwalking.org.uk. 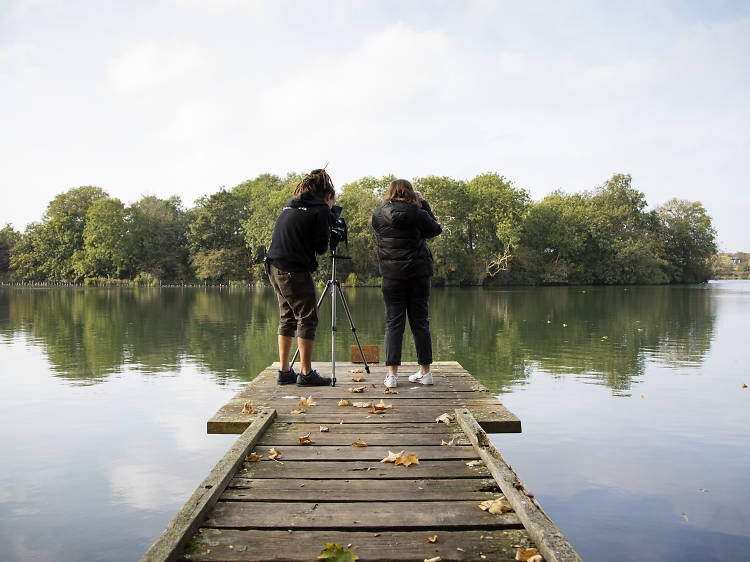 London is a metropolis of concrete and culture, but in between the brilliant bars, restaurants and galleries you’ll find serene pockets of nature. Sure, there are the big Royal Parks and lovely local green spaces to get your foliage fix, but we’re talking wet ’n’ wild bits of the city.