London is a metropolis of concrete and culture, but in between the brilliant bars, restaurants and galleries you’ll find serene pockets of nature. Sure, there are the big Royal Parks and lovely local green spaces to get your foliage fix, but we’re talking wet ’n’ wild bits of the city.

RECOMMENDED: The best things to do in London 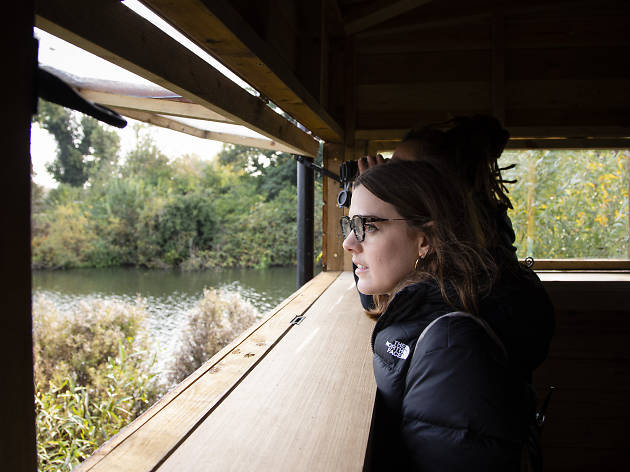 ‘Sparrowhawk!’ ‘Kestrel!’ I’m at Walthamstow Wetlands with Charlie Owens, the site’s ecology and conservation ranger, and he keeps stopping mid-sentence to alert me to the local residents. ‘It’s the one that looks like it’s got a topknot’, he says, as I try to get a closer look at a tufted duck. Walthamstow Wetlands is both a nature reserve and a Thames Water reservoir site. It only opened to the public in 2017, but the first reservoirs were hand-dug in the 1800s.

Charlie’s role here focuses on conservation, including fortnightly surveys where volunteers count all the birds on the water, and a ‘ringing’ project, where they place colourful metal rings on birds’ legs to keep track of them. ‘We’ve done the project for two years so far. Birds who were ringed here as chicks have been found in the Peak District and Brighton, one appeared in Birmingham’, explains Charlie. ‘You can learn so much about their habits through these activities.’ Charlie is a mine of information. I learn about waxwings – birds with red-tipped feathers, which you’ll see in winter at the wetlands – and I’m surprised to find out that there are mussels in the reservoirs – they collect on the concrete banks and the tufted ducks (the ones with the top knots?) feed on them. Otters, grass snakes and eels have all been spotted. ‘Eels can climb over land – I don’t think they’d have trouble crossing over the path between reservoirs’, Charlie says . Oh, and they grow up to a metre long. I’m both intrigued and terrified.

Putting aside images of an eel jumping out at me, I ask Charlie what makes the wetlands important. ‘There’s a whole heap of birds, invertebrates and mammals that rely on these types of habitats,’ he explains. ‘If reed warblers fly all the way from Africa and there’s no reed for them when they get here, they can’t breed – that population could crash.’ It’s not just the birds that benefit. Walking around the wetlands is incredibly peaceful and I learn a lot in one morning. Okay, I’m no David Attenborough but at least I can now spot a tufted duck. Probably. Isabelle Aron 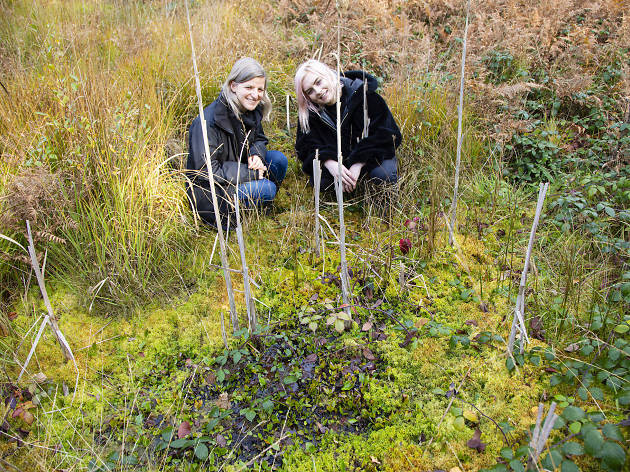 Wading around in a soggy, brown peat bog doesn’t sound particularly inviting. But the Farm Bog on Wimbledon Common is so beautiful it makes up for the fact you have to get a bit muddy. Hidden at the bottom of a tree-laden path, shallow pools of water are scattered with purple grasses and tufts of green. In the summer, the vegetation provides shelter for dragonflies, while lizards can be found sunbathing on nearby rocks. As I tread through the pools, it sometimes feels like my wellies might get eaten up by the ground, Glastonbury style.

This suction effect is due to two metres of layered, spongy sphagnum. ‘The moss at the bottom is around 6,000 years old,’ explains conservationist Petra Sovic Davies. ‘Testing samples, we can see that the environment around here used to be a lot more grassy and there were far more grazing animals roaming wild across the land.’ Bogs used to spread across the landscape from here all the way to Croydon, though today this tiny clearing is one of the last six in London. ‘Over hundreds of years, many of these wetlands have been sucked dry to make way for agriculture and housing, or they have been drained by water companies who feed water back into our homes,’ Petra tells me. ‘It’s a shame, because bogs are one of the most efficient ways of removing carbon dioxide out of the air.’

The moss on the surface absorbs the global-warming gas and turns it into carbon during photosynthesis. Normally the gas would be released when the carbon decomposes, but at the bog, the carbon sinks below water level and can’t fully rot: it remains trapped in the ground. This makes bogs superheroes in the battle to stop climate change. It’s no wonder local conservation groups are working hard to safeguard this bog by cutting back the nearby brambles and silver birch trees that quench their thirst on its moisture. We should be able to walk on water in Wimbledon for a short while yet. Annie Lord 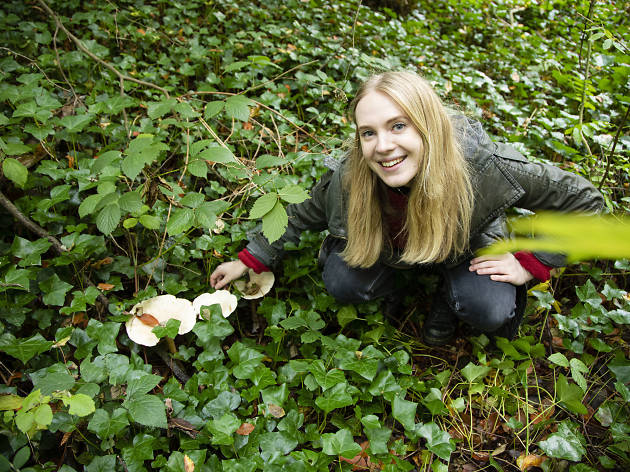 I’ve spent ten minutes in Sydenham Hill Wood and I’ve already passed the spot where my guide found a decaying fox carcass. ‘We don’t usually move dead animals,’ says Rachel Dowse, a conservation officer from the London Wildlife Trust, ‘but this one was starting to smell.’ Rachel assures me this is all part of what keeps habitats ticking. I’m in one of the last swathes of the ancient Great North Wood. It’s home to 200 species, all in Zone 2. Rachel points out what my urbanite eyes see as lumps of old wood, but on closer inspection I notice they’re covered with colourful fungi at their prime. We spot flubbery jelly ears and a rare blood-orange cinnabar oysterling that only grows in ancient woodland. ‘The fungi sound like they were named in the Middle Ages,’ says Rachel, ‘but a lot of the names were created in the noughties to create interest in mushrooms.’

We rub our fingers over a jelly fungus called crystal brain that looks like the slime you grew gooey aliens in at school, and we flick the white tips of candlesnuff, releasing talcum powder spores. Rachel says the fungi we’re touching are just small visible parts of a huge organism which spreads out in threads under the ground, literally mushrooming up when it needs to release spores. My favourite spore-emitter is the bizarre earthstar – a starfish-shaped shroom with a sack in its middle that spurts out dust when prodded. We turn our attention to the tops of the trees where bat boxes hang. The wood is home to six species of bat. Over the winter they hibernate in a railway tunnel. ‘The brown longeareds are really cute,’ says Rachel. ‘When they sleep, they cover their huge ears with their wings. There are plants and fungi that can only grow here because it’s so ancient. It’s a special place.’ Alexandra Sims 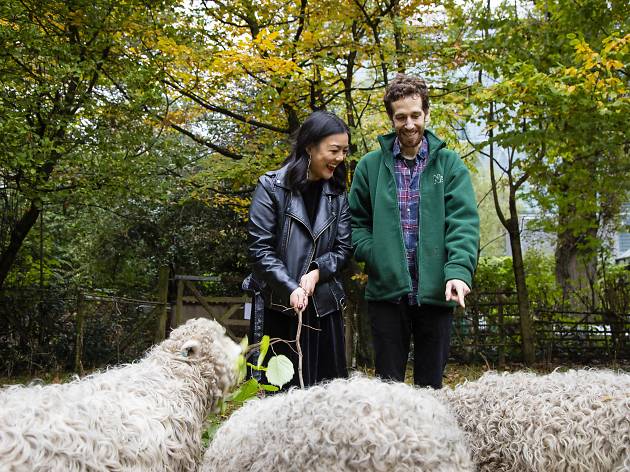 ‘Baa, baa, baa!’ Three adorable sheep are bleating at me, one after another, as I stand surrounded by ponds, shrubbery and trees shedding golden leaves. If it wasn’t for the honking from nearby traffic, I could be fooled into thinking I was in rural Wales, but I’m actually at the Natural History Museum. The institution has a wildlife garden that’s accessible to the public all year round. Since it opened in 1995, more than 3,000 species have been identified there.

Three full-time staff and 35 volunteers all chip in to help maintain the urban green space, which brings increased biodiversity to the capital. For six weeks of the year, the garden is also home to Bee, Bracken and Ivy, the three greyface Dartmoor sheep who are brought in as ‘lambscapers’. They’re on loan from the London Wetland Centre in Barnes and play an integral role in sustainably managing the garden. ‘Besides being very cute and popular, they do an important job of managing the site and are more than just lawnmowers,’ Tom McCarter, wildlife garden manager, laughs. ‘The way they eat creates uneven mosaic-like grounds which attract more diverse plants and insects.’

Tom passes me a birch branch with leaves and I get the chance to feed these cute grass-eating machines. I shake it and they swarm around me, biting off the foliage and almost tugging me along with them. ‘Because they’re a hardier breed, they happily munch away on anything like bramble, twigs and smelly plants like mugwort. They want different nutrients and different tastes.’ Tom explains. ‘This project is to get people engaged with nature and to discover what’s in their back garden. Even where we’re standing, right next to Cromwell Road, nature is everywhere.’

I’m trying my hardest to concentrate on what Tom is saying but I can see the sheep out of the corner of my eye – and they seem to be grinning. Either I’m a natural sheep whisperer or they’re just after more food. Angela Hui 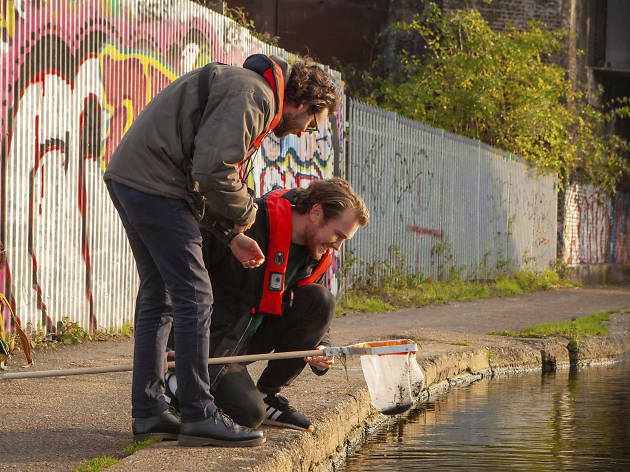 Canals and bats might not be the most obvious mix. Yet according to Tim Mulligan, an ecologist with the Canal & River Trust, the near-total night-time darkness makes canals a refreshing route for the nocturnal.

Bats are just one of the stars of this surprisingly abundant ecosystem, alongside crayfish, terrapins, mitten crabs and mink. Daylight timing means Tim and I are out today spotting kingfishers instead of the spookier critters. There’s a kingfisher burrow just off the Limehouse Basin, the perfect place to start.

Tim and his team look after the wildlife on London’s waterways, a remit which includes everything from these birds, to invasive exotic weeds, to the tiny snails we’re now fishing out with Tim’s trusty net. (We put them back afterwards.) Tim’s job is all about caring for the water’s residents, which means he knows a lot about the more colourful characters – like the seal who rocks up to Billingsgate Market for breakfast, or the psychotic swan who drowns Canada geese in Camden Lock for kicks.

Aside from helping me with bird-watching and snail-spotting, Tim is keen to draw my eye to some of the threats faced by these waterways – such as the looming high-rise developments above, which block out the sunlight necessary for bottom-of-the-food-chain daphnia to develop. There’s pollution, too, hence the Canal & River Trust’s ongoing initiatives to get London residents litter picking, as well as the in-house efforts to build water-filtering floating ecosystems. These provide the triple whammy of flowers for pollinators, habitats for underwater animals, and a natural water filtration system which wards off pesky duckweed (that’s the green stuff you often see on the surface).

That’s not to say it’s all rubbish – some of the canals’ more wily residents have made the most of their urban existence. ‘Eels love abandoned tyres,’ Tim says. ‘Every time we’ve tried to remove one, it’s been full of eels.’ Thankfully, our walk is tyre-free – although I’m pretty sure I can hear some bats under the bridge where we end our trip. I think I’ll stick to land for now. Bobby Palmer

Need more greenery in your life? 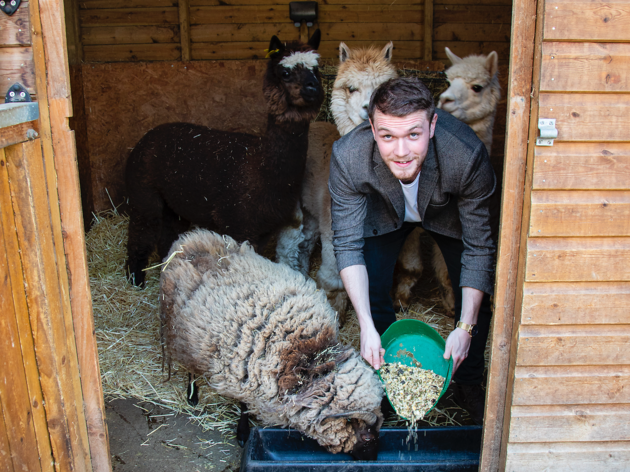 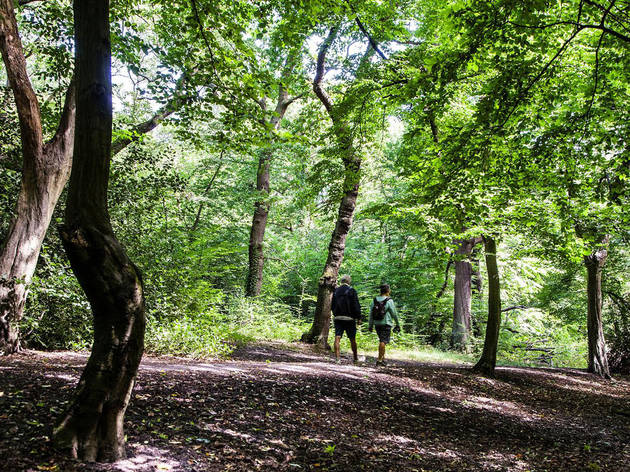