When I first speak to Alan Mitchell, 61, it is December 4. He has just got back from a morning dip in the Thames. ‘About five degrees,’ he tells me. Mitchell’s the president of the Serpentine Swimming Club, and last swam in the Hyde Park lake the Saturday before. It was colder still: ‘Two point three – it’s usually one or two degrees below the Thames.’

Mitchell is in training for December 25. Christmas Day marks the club’s big event of the year, when its hardiest members compete for the Peter Pan Cup in a 100-yard race across the Serpentine, without a wetsuit.

The race has been swum every year since 1864, when the club was established, but Mitchell says that it may have begun before then. The prize is named after the lead character in JM Barrie’s children’s novel, and from 1903 to 1932, the author sponsored the competition and presented the cup to the victor.

Competitors come from around the UK, and there’s no upper age limit (one entrant is in his eighties). ‘If you are lucky enough to win, you spend the rest of the day in a dream-like state, answering emails from people who have read the result in the most obscure newspapers,’ says Mitchell. ‘Outside of an Olympic 100m final, no other swimming event attracts the same level of worldwide media attention.’

‘If you win, you spend the rest of the day in a dream-like state’

Contenders take part in a number of races throughout the winter to qualify – six or seven if they’re newcomers – and although there is plenty of room on the day for the public to cheer swimmers on, there is no dropping in to the race. Mitchell agrees with the Outdoor Swimming Society’s advice that if you want to swim in winter, you need to start in summer: ‘Some winter swimmers will say you can swim 100m for every degree that it is, but it depends on a whole range of factors such as how you’re feeling or  how much sleep you have – each time you go in will be different. Begin with short periods of time and come out before you start to suffer.’

The club has seen growing interest ever since the wild swimming memoir ‘Waterlog’ came out – there were 40 or 50 members 30 years ago, and now there are around 2,000.

Christmas Day swimmers can be found at Highgate Men’s Pond, and there are New Year’s Day dips at the Ladies’ Pond and the Royal Docks, but the Peter Pan Cup has the competitive edge. For those who don’t snag the prize, there’s still a reward at the end: ‘As you step out of the water, numb with cold, you’re handed a large tumbler of warm port and red wine by Rose, the 80-year-old “Queen of the Serpentine”,’  says Mitchell. It’s almost enough to tempt me into training for the 2020 cup. Almost.

Every year, members of the Kenwood Ladies’ Pond Association gather at the open water at noon for the New Year’s Day dip. Joining them this year will be author Jessica J Lee, who has been winter swimming at the pond since 2014. She’ll happily hop in for a few minutes, even in icy conditions: ‘It’s really about sensation,’ she explains. ‘It’s a sort of shock, and afterwards elation.’

For Ava Wong Davies, who swims at the pond twice a week, it’s like meditating: ‘All you can do is focus on your breath and how your body feels. You can’t think about anything else.’

Lee agrees: ‘It’s a cure for dark winters, feeling like you’re not doing anything. Throwing yourself in it for a few minutes cuts through everything.’

Swimmers meet at Kenwood Ladies’ Pond from 10am on Jan 1 for a swim at noon. Spectators welcome. Find Lee and Davies’s essays on wild swimming in the book ‘At the Pond: Swimming at the Hampstead Ladies’ Pond’. 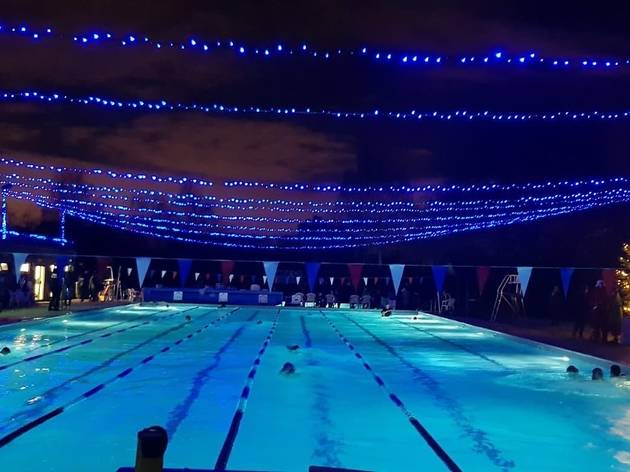 Take the plunge. Get the chills.