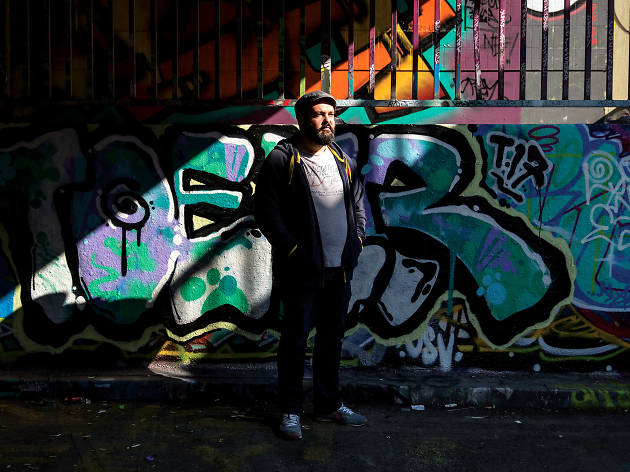 ‘I consider myself a sculptor but have become famous for my graffiti, and the activism that goes with it. I use stencils based on head shots of Syrian people, victims, those caught up in the madness. Many of my subjects are now dead.

‘I use graffiti because it is disobedient but also beautiful and accessible. Easy for people to find, easy for people to see. Thanks to artists like Banksy, it has a very high profile now. I’ve graffitied in a lot of places – London, The Hague, Amsterdam, Spain – to get the message out. I was part of a project called Freedom Graffiti Week, where people could download our stencils to print, then cut out and spray in their own city.

‘Word spread of what we were doing and last year I had my work displayed at the Victoria & Albert Museum. It was incredible to be spraying my work on to the wall there. Truly a lifetime achievement.

‘I’m always looking for opportunities to tell a different story to what the media focuses on. I’m really happy I have a platform, but I want to do more. Getting the attention of the media is hard. I don’t know why that photo of the boy on the beach in particular rose to prominence. He’s not the first child we’ve lost, definitely not; three days earlier, 12 bodies of children washed up on the beach. This photo managed to break the silence. I don’t know why, but it seriously made all the difference. I think it was one of the main reasons there was that massive demonstration recently. That’s the power of the right image.’ 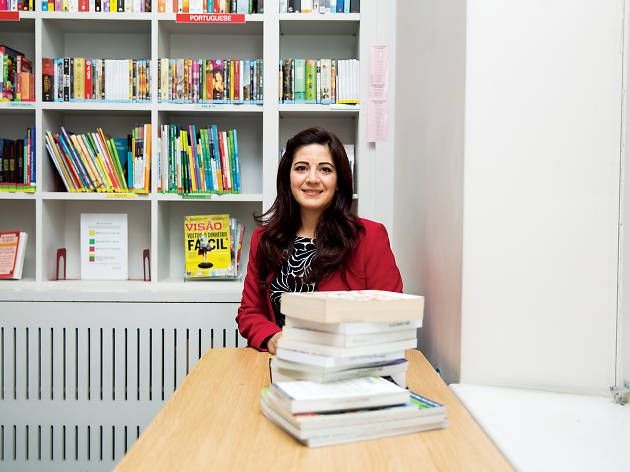 ‘I teach at King’s College and the Foreign Office, training officials and ambassadors going to work in the Middle East. I teach them the language, the culture, how to address the media and how to best serve the country. I help them learn the other side of the story, and see through the Assad propaganda.

‘I was abroad studying when the revolution happened, and now sadly I can’t go back. Even in the light of all the terrible things that have happened since, I do maintain that the revolution is a noble, great thing. People taking to the streets, demanding their dignity and their rights. We were all very proud. We did not expect the Assad regime to start murdering its own people, in cold blood, just to stay in power. Who did?

‘The people who pay the price ultimately are the poor, the weak and those who can’t afford to leave the country. Or those forced to leave by sea. Would you take your family, your children, into the sea – unless it was your only hope?

‘Of course we need to offer the refugees shelter and food, and that’s a great thing, but in addition the international community needs to address the war itself. I think many well-meaning people have sound reasons for reluctance in supporting interventions, uch as fear of involvement in armed conflict and being reminded of the horrifying consequences of the Iraq invasion. But we can’t keep watching a lunatic regime killing its people with chemical weapons and barrel bombs.

‘I like London. There are lots of wonderful things to do, and I am proud to call it a second home. The Syrian community here is very active; we have groups like the Syrian Family Club, which runs events such as Mother’s Day parties. We give advice to newcomers on how to get a job, how to navigate the education system. It’s very important that people who make it here can manage their emotional and mental health. And membership of a strong community is a big part of that. I also help run a poetry group called Qawafi Al-Dhabab. In Arabic “qawafi” means the rhyme at the end of a line of verse and “dhabab” means fog. In Arab countries, London is known as the “Fog City”.So the name of the group is literally “rhyming in the fog”.

‘I long to go back and help rebuild Syria. I intend to become education minister; it’s my area of expertise, and I know we can rebuild the country properly only by establishing strong, well-attended schools. First, though, we need help to fix the security situation, to make it safe for us so we can get our lives back. It’s hard sometimes, but we cannot lose hope.’ 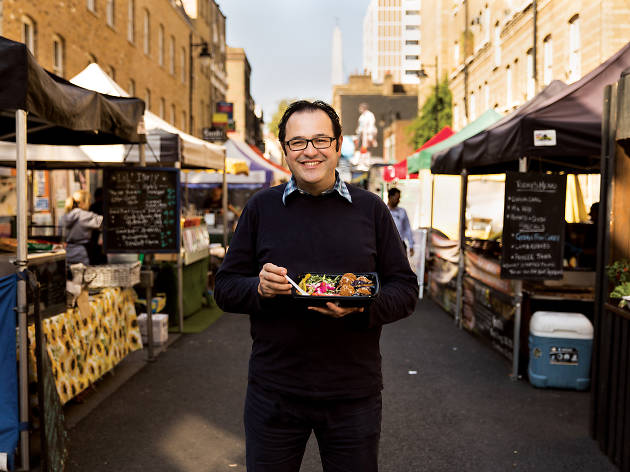 ‘I started my blog in 2009. I noticed that Syrian food wasn’t getting a lot of publicity in London, because the majority of it is sold as Lebanese – the Lebanese community is better established here and they have many more restaurants. Food is my passion, so I chose to write about that.

‘As the political situation back home intensified in the run-up to the revolution in 2011, I couldn’t help commenting through my blog. This attracted some media attention, and I did my best to put journalists in touch with real people inside Syria. There was a very negative picture being painted in the press, and I wanted to change that via food. It was important to me to make people aware that there’s more to Syria than just war.

‘What’s strange is how very regional what’s going on back home is: you will see one neighbourhood that is functioning normally; 200 metres down the road there’s a faultline, and beyond that just ruins – government warplanes bombing the area, explosives, the whole thing.

‘I miss Damascus. It’s one of the most magical and beautiful places to visit. It’s also the oldest inhabited city in the world. There is lots of culture: restaurants, cafés, art galleries – it’s a really good place. I miss my friends; we were together all through high school, university and beyond. I miss getting together, playing cards for hours in the evening then jumping in the car at 1am to go eat.

‘Sadly I am not at all optimistic about the future. Syria as we knew it doesn’t exist any more and it will never go back to being a unified country. It will become a failed state, similar to Somalia, with war raging on for decades. London is my home now.’ 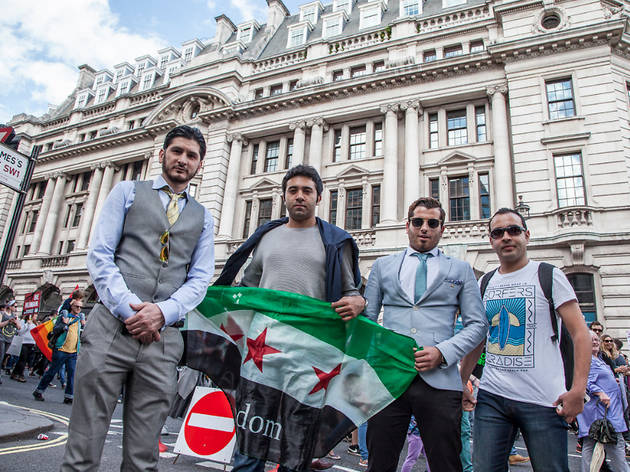 'Our family is still in Syria. Our people have been killed for five years. This is a 'welcome' to my people and to my family, telling them to come to the UK to be safe. Thousands of Syrian children have been killed now. The world is watching, but no one seems to care.' 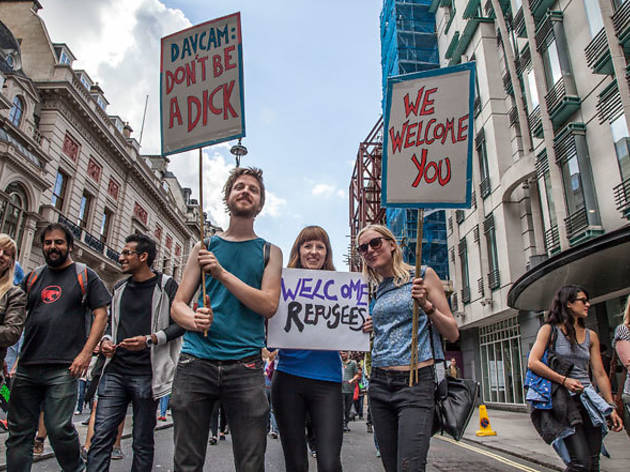 Tens of thousands of protestors marched from Park Lane to Downing Street on Saturday, to show their solidarity with refugees.