Why London’s darts scene has never been bigger

Londoners are falling back in love with darts, but with so many pubs facing closure, where are people going to play?

A sea of foam fingers and chanting crowds in fancy dress filled Alexandra Palace for 16 days over Christmas for the World Darts Championship. Around 84,000 people attended in 2019, with more demand for tickets than ever before. ‘It’s certainly been the biggest and best yet in terms of buzz and profile, particularly with Fallon Sherrock’s success,’ said an Alexandra Palace spokesperson. Sherrock made history at the event when she became the first woman to defeat a male darts player at the Professional Darts Corporation World Championship, going on to reach the third round. Her success brought darts to a wider audience and put a much needed spotlight on women in the sport. This year, she will make her debut at Premier League Darts, which begins on Thursday February 6.

One business that’s riding the wave of this buzz all the way to the high street is Flight Club, an upmarket chain of darts bars where DJs, dancing and bottomless brunches are as much a part of the proceedings as the bullseyes. Since opening its original Shoreditch site in 2015, Flight Clubs have sprung up in Islington, Bloomsbury and Victoria. The set-up is all very flash: the electronic dartboards (at £30 for 90 minutes) have screens that take your picture as you play. The popularity of this kind of darts experience just keeps on growing: according to Flight Club, bookings increased by 177 percent from 2018 to 2019 and a whopping 94,265,200 darts have been thrown at its London venues. Others are joining the high-end darts bandwagon too, like Darts Club London in Clapham, where you can play while tucking into wood-fired pizza.

These places are a world away from the trad pubs that host networks of local darts leagues. For Sherrock, new high-tech darts bars like Flight Club seem unfamiliar. ‘The core reality of grassroots darts is the fun atmosphere of pubs and clubs, and not having to pay hourly or evening fees to play,’ she says, ‘But I do see it’s more for entertaining’. For other enthusiasts though, upmarket darts bars offer a space for the game at a time when its traditional homes are disappearing.

‘There’s more people throwing darts in London than ever’

Nolan’s has been a famous darts haunt in Vauxhall since 1985. Run by Shaun Nolan and his dad Gabby, the pub is legendary on the London darts scene with matches played five days a week and connections with well-known players like Bobby George. It’s also one of the few pubs left in the capital that still has a healthy set of dartboards. ‘There were 20 darts pubs around when we first moved here; there are about three now,’ says Gabby. ‘Bermondsey and Rotherhithe were massive darts areas. Now the pubs that haven’t been knocked down have all turned into gastropubs.’

‘Darts has never been bigger,’ adds Shaun. ‘Thanks to Sky showing games and people like Fallon Sherrock, there’s a whole different demographic of people playing now. There’s more people throwing darts in London than ever, but there’s just not enough pubs with dartboards.’ 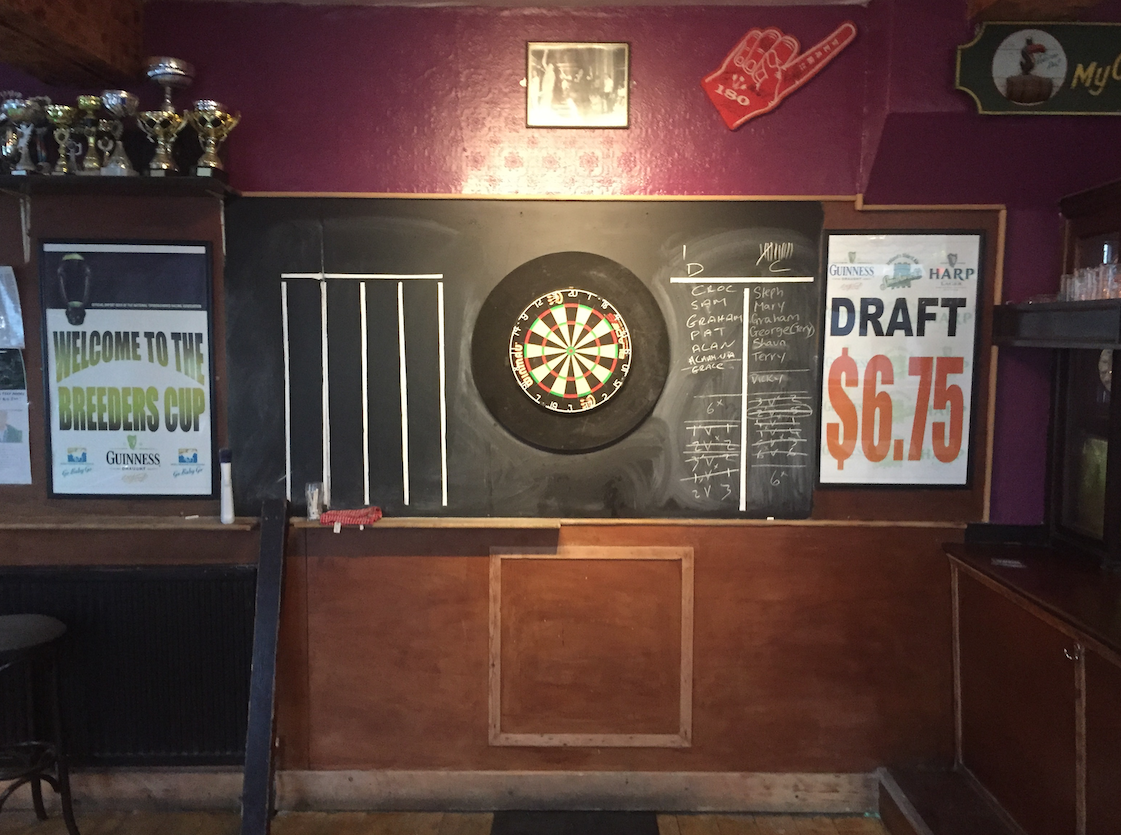 For Shaun, venues like Flight Club are a welcome addition to the London scene: ‘Any kind of darts pub has got to be good,’ he says, ‘What London needs is more dartboards. If people go to those places and think, “I’m not too bad at this”, then hopefully they’ll look into joining a team, so it’s a route into the game. Darts will die out if there are no places left with dartboards.’ 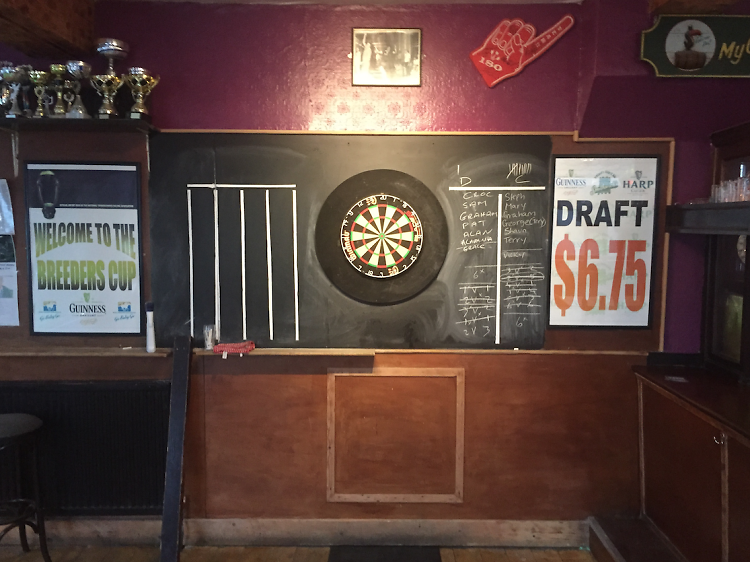 Darts newbies should head along to Nolan’s on Wednesdays for a game and take full advantage of the darts experts who’ll you find hanging out here.
33 Wilcox Rd. Tube: Vauxhall. Prices vary. 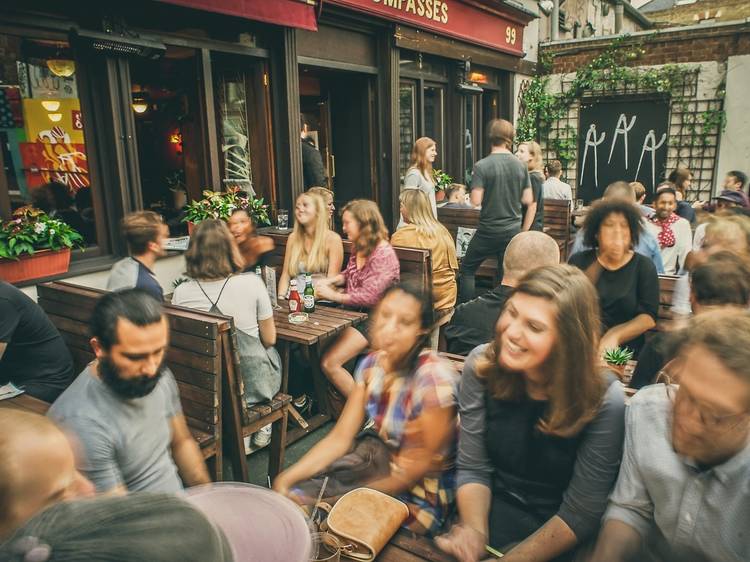 A reliable Dalston boozer with a changing roster of street food alongside craft beers, SNES gaming nights and a battered dartboard to throw stackers on.
99 Dalston Lane. Dalston Junction Overground. Darts: free, £5 deposit for the darts. 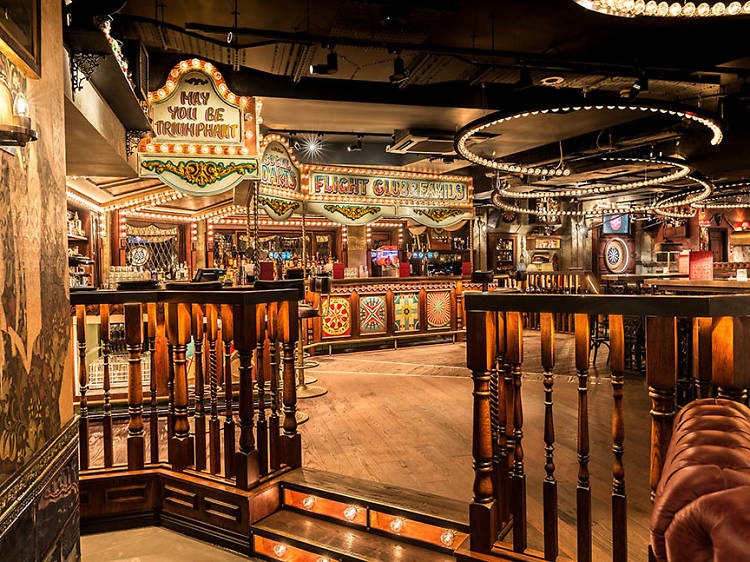 It may be a draw for corporate team-building events, but it has decent food and drink alongside the arrows and is great for a big group. And if your maths doesn’t add up? Don’t worry, the scores are all done by computer.
55 New Oxford St. Tube: Tottenham Court Rd. Darts: from £30 for 90 minutes.

Self-described as a ‘village pub in the city’ (but with a very London selection of craft beers), this family-owned joint has two dartboards in the back. As a bonus, you can order in your own food while you wait for your turn to throw.
8 Tysoe St. Tube: Angel. Darts: free Mon-Fri before 5pm, from £5 per hour Mon-Fri 5pm-11pm, all day Sat and Sun.