Step aside, bearded brewers. There's a new guard within L.A.'s craft beer scene, thanks to a growing number of dedicated, beer-loving ladies on both the business and brewing side. From the city's first female brewmaster to the founder of our largest brewery, these five women are bringing some of your favorite local beers to life. Discover how they got into the beer industry, their favorite beer bars in L.A. and what they're looking forward to drinking this fall.

RECOMMENDED: Our guide to craft beer in L.A.

Get to know a few of L.A.'s craft queens 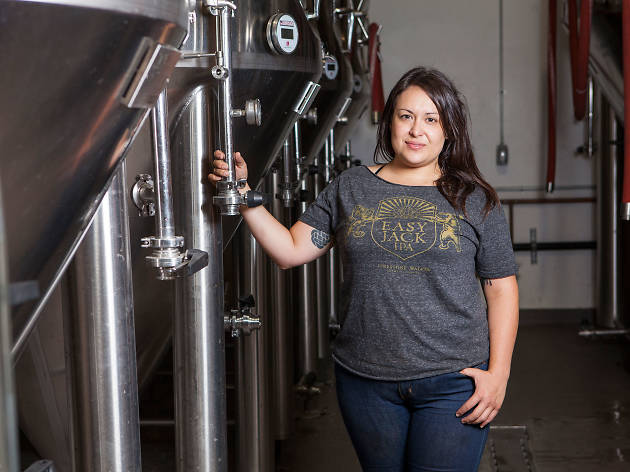 It’s pretty incredible to think that, until 2014, L.A. had never been home to a female head brewmaster. That changed with Alexandra Nowell, who helped open Three Weavers in Inglewood (owned by Lynne Weaver, another powerhouse in the beer industry). Nowell studied brewing science as an undergrad in Miami at a time when, she says, “the beer situation was pretty dismal.” She worked at Sierra Nevada Brewing Company, Drake’s Brewing and Kinetic Brewing before finally landing at Three Weavers. The head brewmaster is also the Pink Boots Society L.A. Chapter President, encouraging the growth of women in the beer industry. “The Pink Boots Society really opens up a lot of doors,” says Nowell. “With the amount of women now involved, I truly believe it’s easy to stay on par with male counterparts. No one is going to place you on a pedestal, so you have forge the path on your own. Fortunately, a lot of women have helped pave the way to make things a little easier.” Nowell doesn’t let her status as L.A.’s first lady brewer define her, though. “I’ve stopped placing any sort of emphasis on my position and my gender,” she says. “I’m more concerned about making great beer, and constantly improving my skills as a brewer.” 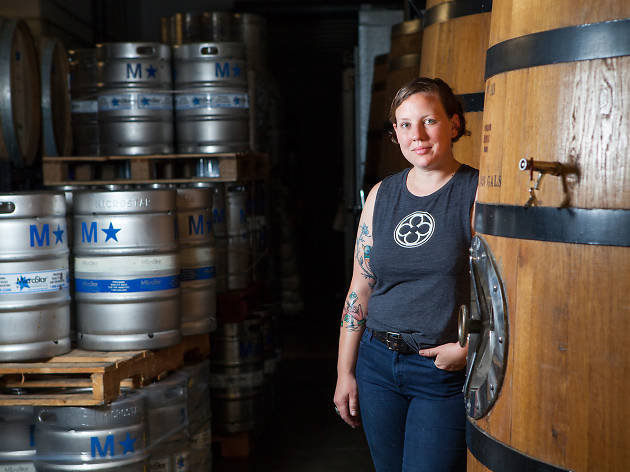 Jennifer Treu was a Monkish Brewing fan before she was its assistant brewer. The Long Beach resident frequented the brewery in Torrance with her boyfriend on a regular basis, hanging out in the tasting room and chatting with owners Henry and Adriana Nguyen whenever she could. Henry offered her a job pouring, then an apprenticeship as an assistant brewer, prompting Treu to quit her job and switch careers. "I got pretty lucky with Henry," says Treu. "It was just me and him brewing at the beginning, and he always treated me as an equal. I didn't get special treatment as a woman; he holds me to the same standards as he holds men. That's something that I really responded to." When it comes to starting a career in beer, Monkish is a great place for women. “We’re a very woman-centric brewery,” Treu explains. “We focus on Belgian styles, which are a little bit more approachable to women. A lot of men come in and stick their noses up at Belgians, but if I can get them to enjoy a glass of one of the beers we make, that’s something that I really appreciate and enjoy doing.” At the end of the day, she views her career change as an exceedingly positive one—and one that doesn’t focus on being the only female brewer in the building. “I enjoy being a women in the beer industry, but I don’t want that to be a factor,” she says. “I just want to be looked at as someone who’s working hard and making good beer.”

Treu's go-to beer spots:
"I live in Long Beach so I stay pretty local. I go to Beachwood Brewing quite a bit with my family, and my favorite bar to go to right now is 4th Street Vine—they only have about six beers on tap but it’s a really nice environment and they always have a nice selection of craft beers on tap." 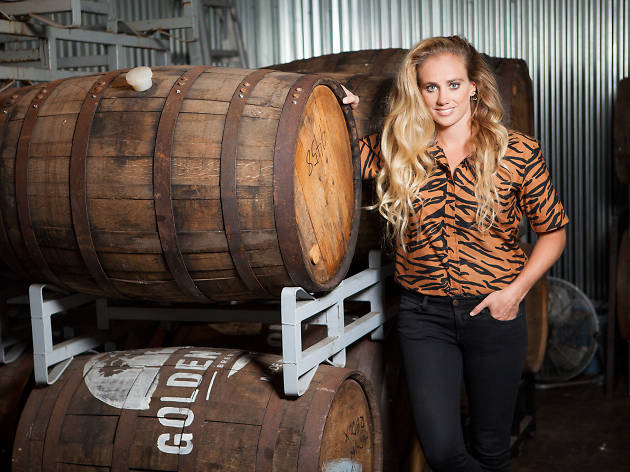 “Being a novelty in an organization is not a bad thing,” says Meg Gill. She should know: When Gill helped found Golden Road Brewing in 2011, she was not only one of craft beer’s few female brewery owners, but also one of the youngest. Fast forward five years, and Golden Road has since opened tasting rooms in Anaheim, Grand Central Market and LAX. For mentorship, Gill looked to other boss ladies. “Nobody had done what we set out do, male or female, so I had to look outside of beer to find bits and pieces of advice,” Gill explains, naming Gina Marie Lindsey, the former executive director of LAX, as one of her main sources of financial and management advice. Along the way, the challenges Gill faced helped to shape her growing business—and, like Lindsey, she worked hard to define her own success. “It was a female thing and a youth thing—I didn’t have a daddy who owned a business,” she says. “I felt like I needed to know everything about the business and the beer if I was going to be taken seriously. And now I think it’s paid off, because it’s a little bit of the unexpected.” Golden Road was bought by Anheuser-Busch at the end of 2015, but the brewery maintains its steadfast goal of serving locally-brewed craft beer to the L.A. masses.

Gill's go-to beer spots:
"It’s kind of a funny one, but the Tam O’Shanter. It’s the oldest pub in L.A. County." 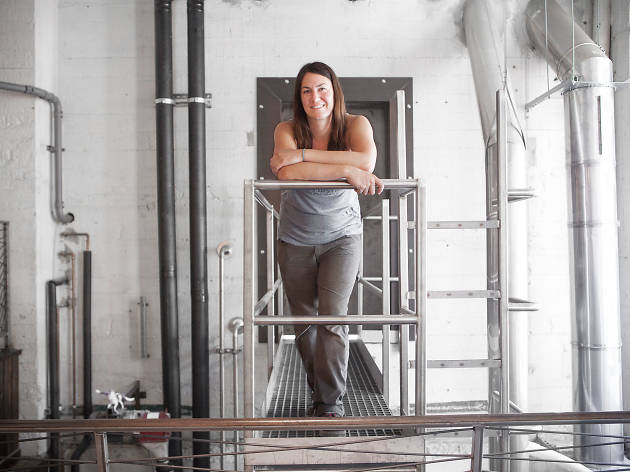 Devon Randall started her brewing career by knocking on doors. The L.A. native was working part-time in real estate when she decided that brewing might be more in line with her interests, so she headed to San Diego, asking for internships at multiple breweries before finally landing at the Lost Abbey. “From then on I tried to do everything I could to come back the next day,” she says. Her role in the San Diego beer community evolved from working on the Lost Abbey's bottling line into a brewmaster position at Pizza Port Solana Beach, before she was eventually invited to open Arts District Brewing—becoming only the second female brewmaster in L.A. Now approaching its one-year anniversary, Arts District Brewing is one of L.A.’s most popular breweries, thanks to the nearly 20 outstanding beers that Randall has created. Some ADB beers have been a team effort between her and Three Weavers’ brewmaster Alexandra Nowell. “I’m really good friends with Alex,” Randall explains. “We did a beer called Captain Sparkles together, which is a hoppy saison. She’s a super great brewer.” Randall says she loves seeing more women getting into the field. “Brewing is an awesome job. It’s not without challenges—you’re moving 50-pound bags and 150-pound kegs a few times a day. But I lift things that weigh more than I do. You can, too.”

Randall's go-to beer spots:
"Highland Park Brewery at the Hermosillo is my local, walkable bar. Plus, Barbara's at the Brewery at the old Pabst plant—they have a great, well-curated tap list." 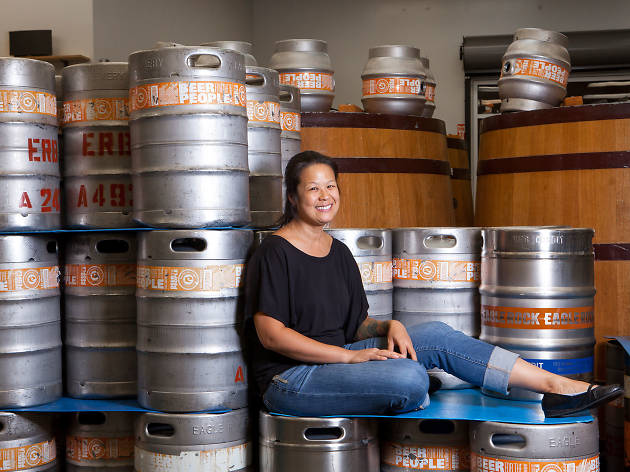 When Ting Su first started Eagle Rock Brewery with her husband and father-in-law in 2009, she noticed an infuriating trend. “I was working behind the bar in our taproom,” she says, “and a lot of the ladies coming in would either say they’re not beer drinkers or they would be in there with their guy—and the guy would veto any decision of hers made about beer.” Su wanted to empower women to make their own choices about beer, to have the vocabulary to describe the beers they liked—and those they didn’t. In 2011 she founded Eagle Rock Brewery’s Women’s Beer Forum, a monthly gathering where women interested in learning more about beer can sample a flight, talk about the characteristics and style of each beer and hear from guest beer professionals. Flights revolve around a theme, whether it be a seasonal selection from another local brewery or a more nuanced look at, say, ciders of IPAs. The forum, which costs $10 to $20 to attend, attracts home brewers and newbies alike, and has even inspired some beer novices to start working in the craft beer industry. As for anyone interested in opening a brewery—male or female—Su has some sage advice. “It's a slow-going process to get a brewery up and running," she says. "So do your homework and know your shit.”

Su's go-to beer spots:
"I like the local hangs. Places like the Glendale Tap are doing a really nice job of curating a list that’s well-rounded and have something for everyone. You have places that are a little bit more polished like 38 Degrees...and bars that have a nice mix of beer and cocktails like the Blind Donkey—they have solid beers and really good whiskey which I like."

Su recommends:
Eagle Rock Brewery’s Hop A Feel, an American IPA, will be out in October, with proceeds benefitting the Keep a Breast Foundation. 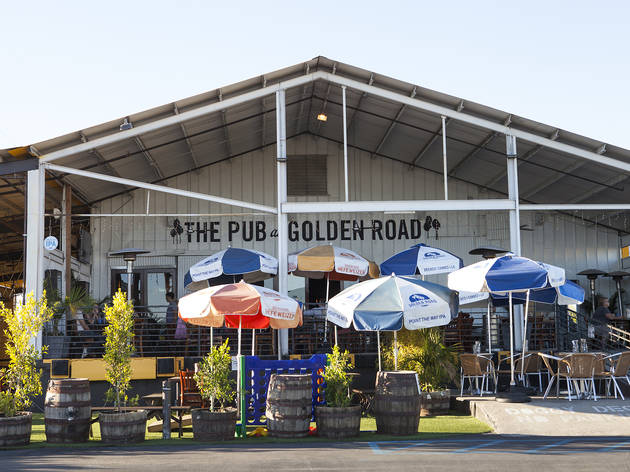 Check out a brewery tour for a behind-the-scenes look at some of your favorite beers.