Whether you’re chowing down takeout or heading to the bar, here’s where to watch the Super Bowl 2022 in L.A.

Huddle up: It’s time to figure out your Super Bowl plans. For the first time since 1993, L.A. will host one of the most widely watched American TV broadcasts of the year at SoFi Stadium in Inglewood. But unless you plan on dropping hundreds, if not thousands, of dollars on tickets, you’ll probably still be watching the Super Bowl on a TV this year. A few simple FAQs:

When is Super Bowl LVI?

What time does the Super Bowl start?

What teams are playing in the Super Bowl?

The Los Angeles Rams vs. the Cinncinnati Bengals.

Throwing a party at home, or heading to a sports bar—something you couldn’t do last year? If it’s the former, you could hit up Costco and buy 400 frozen wings, but you and your friends and family deserve better. If it’s the latter, L.A.’s best sports bars< and many of the city’s restaurants< have you covered, with plenty of outdoor seating.

In either case, check out our roundup of our favorite game day takeout packages around L.A. and a handful of places we think are the best spots to head to and watch the game. Some are restaurants with expansive patios, some are tried-and-true sports bars and some simply make some of the best chicken wings in the city, but all will be offering grub to hold you over during the Super Bowl. Ready? Go! 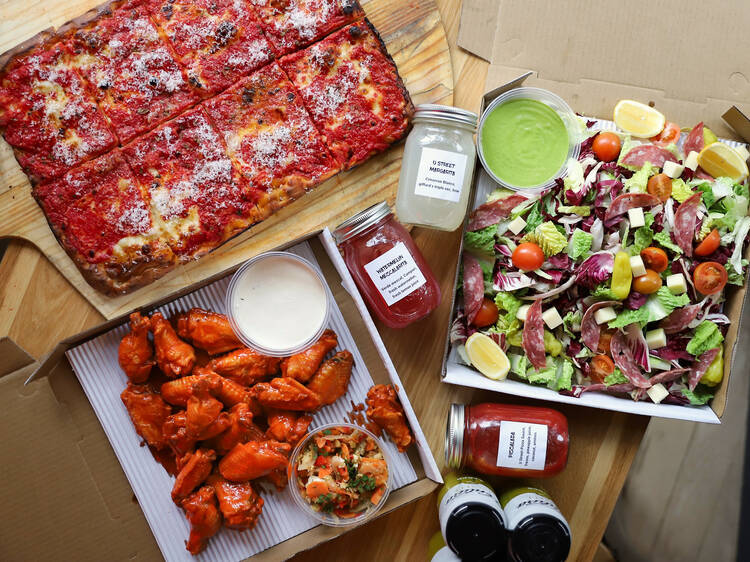 How to order: Order online for U Street Pizza here and Union here. 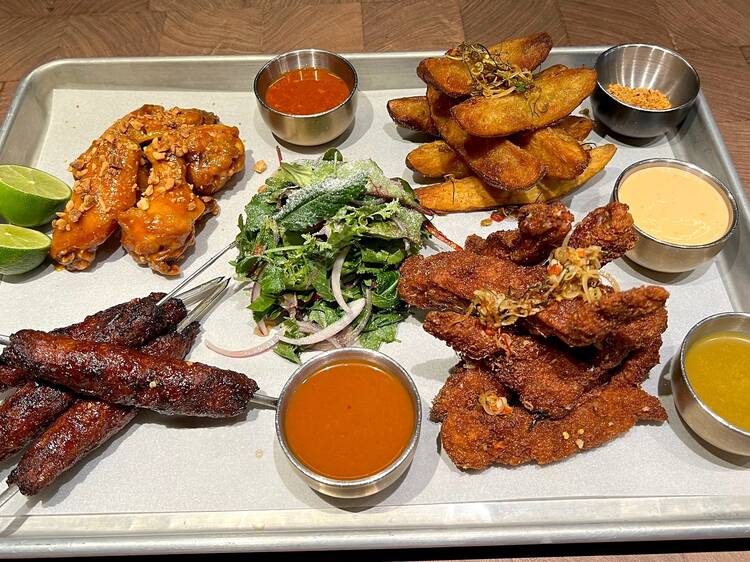 Menu: In a nod to the 56th Super Bowl, this pan-Southeast Asian eatery in Culver City is offering a $56 takeout package for two to three. Each box contains six pieces of their spicy Thai chili chicken wings, six chicken tenders, potato wedges and four skewers of lemongrass pork, plus a Thai herb market salad to balance out all the meat and potatoes. Takeout customers will also receive five of Piccalilli’s delicious dipping sauces, including a red curry vinegar and a fiery sambal aioli. They’ll also be offering four-pack samplers of regional beers like Modern Times and Almanac for $22 apiece. 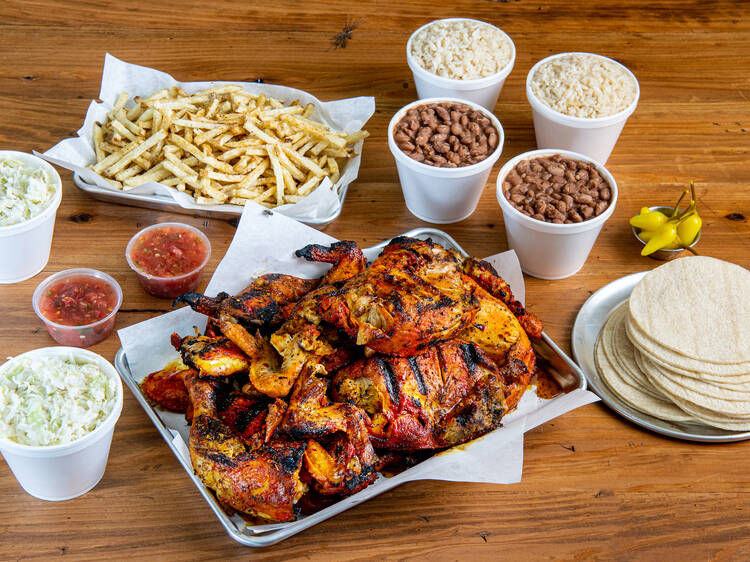 Menu: This longtime chicken and burger spot—and one of our favorite cheap eats—is offering budget-friendly Super Bowl party packs of charbroiled half-chickens and sides ($73, feeds 8 to 10). Each party pack comes with six half-chickens, coleslaw, tortillas and two sides choosing from fries, rice and beans. For those who can’t imagine game day without fried chicken wings, Dino’s will also offer buckets of those as well ($17 for 12 pieces or $30 for 24 pieces) in Dino’s famous sauce or plain. This package will be available at Dino’s Pico Boulevard, Pico Rivera and Azusa locations.

How to order: Order via phone or in person starting January 31, or via delivery platforms on the day of the game. 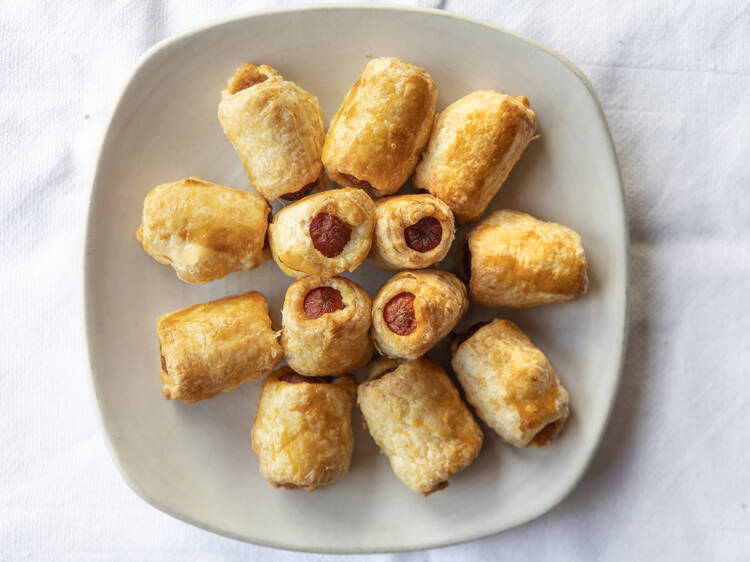 Menu: Culver City’s tried-and-true New American eatery, Akasha, has put together a mix of takeout-friendly apps like chips with guacamole and salsa ($18) and a dozen pigs in a blanket ($24), plus entrées like fried chicken for two ($32). The restaurant’s ordering deadline for the Super Bowl is February 9 at 3:30pm. 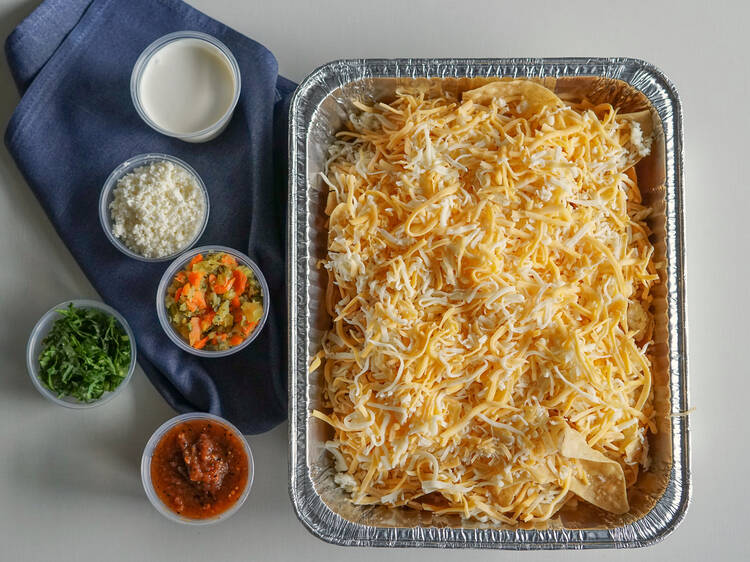 Menu: The Rustic Canyon Group’s beachy Mexican cantina will offer a $160 Super Bowl fiesta package designed to feed 8 to 10 guests. Each meal includes Caesar salad, bean dip and chips, a dozen hot chicken wings, a nacho kit and a taco kit with your choice of protein, rice and beans. There’s even single-serving flan with caramel sauce for dessert, plus an option to add on large-format drinks. Tallula’s ordering deadline for the Super Bowl is February 12 at 5pm. (A few last minute packages will also be available day of via delivery and takeout platforms.) 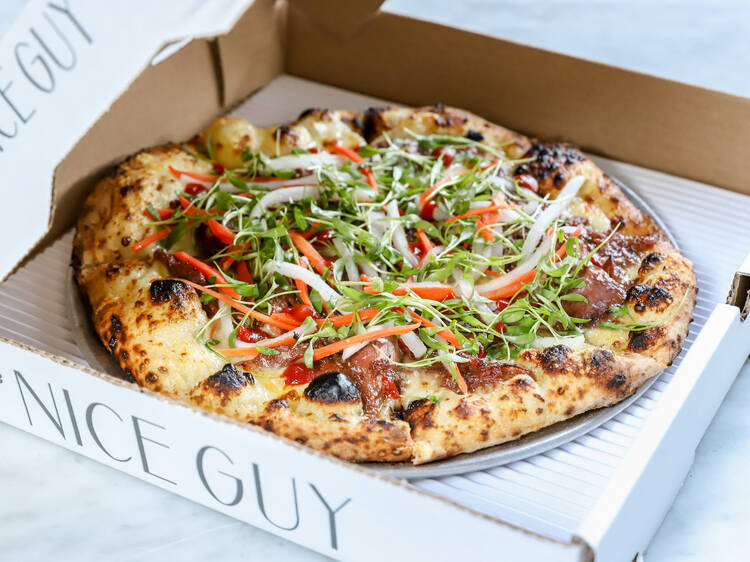 Menu: For groups of four or more, this glitzy West Hollywood eatery is offering a $200 all-in-one meal package for the big game. Each family-style feast includes Caesar salad, meatballs, mozzarella sticks, your choice of pizza and a choice of entrée between chicken or eggplant Parmesan or rigatoni bolognese.

How to order: Order via Tock (pre-orders open Monday, Jan 31). 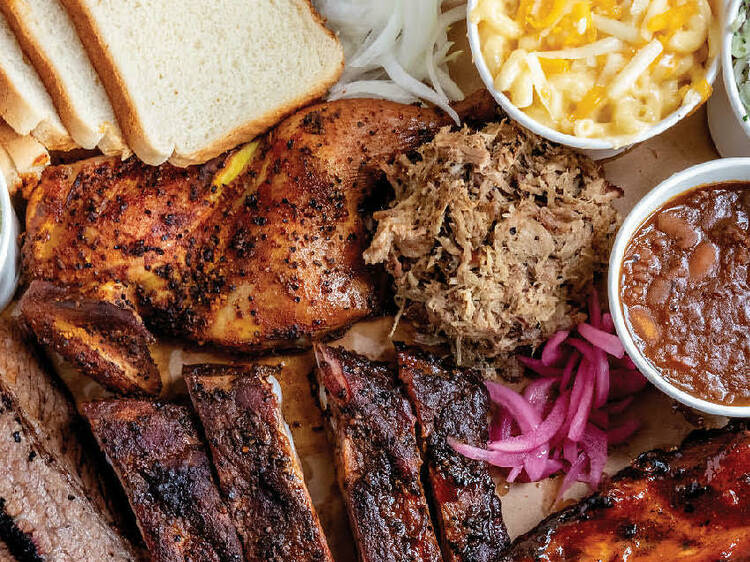 Menu: Feeding a crowd? The h.wood group’s Texas barbecue joint will offer large-format tacos and sliders with your choice of protein and smoked chicken wings by the 20- and 40-piece ($26 and $49 respectively). If you’d rather opt for a full-blown barbecue meal, they’re also offering family-style packages with smoked chicken, ribs, brisket and sides from $109 to $286, depending on head count.

How to order: Order via Tock.

The best places to head out to on Game Day 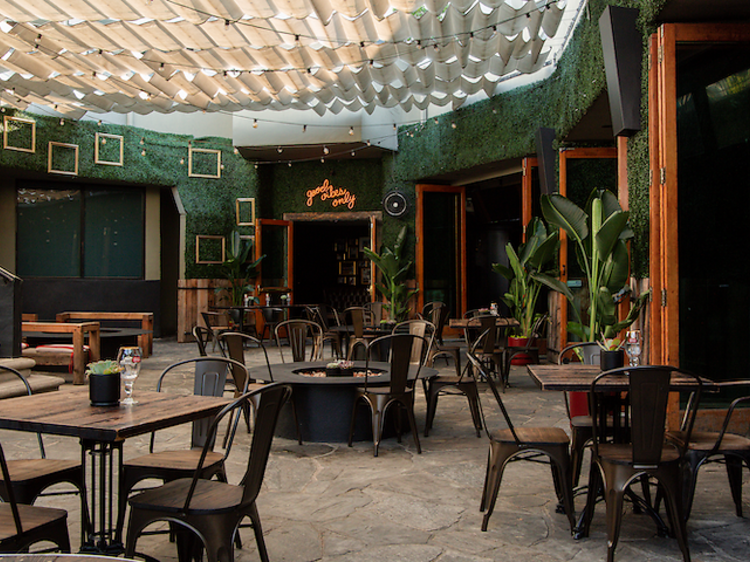 Located on Melrose, this upscale sports bar and weekend brunch spot has an expansive, well-decorated patio that’s full of TVs and a cocktail list that’s as good as its beer selection. Reservations are recommended, since this place always gets packed. 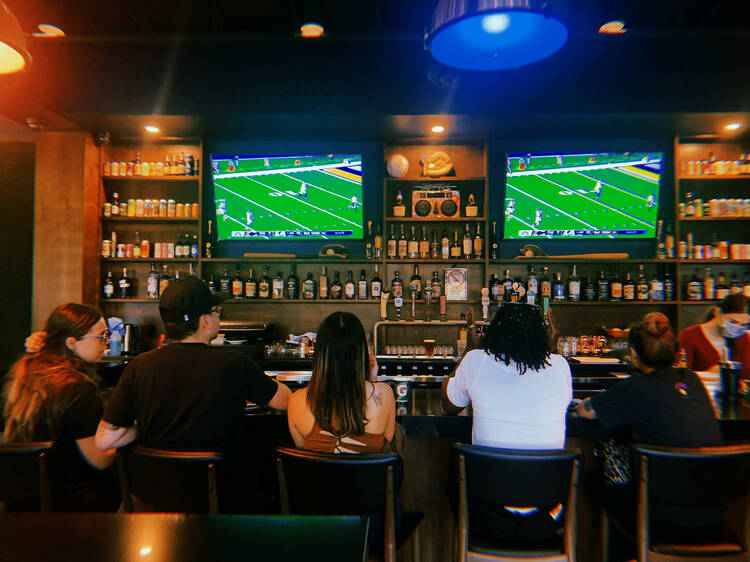 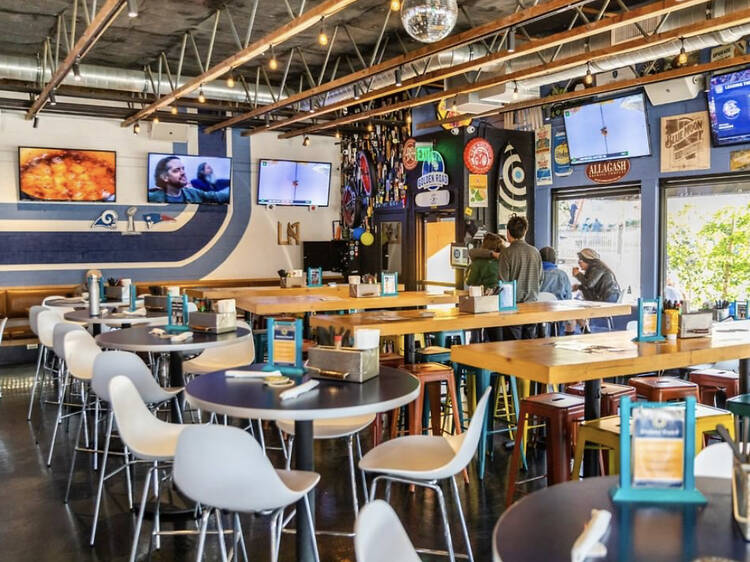 On the Silver Lake stretch of Sunset Boulevard, this colorful indoor-outdoor sports bar makes for a great Super Bowl viewing spot thanks to plenty of flat screen TVs and, well, 33 kinds of beers on tap. If you’re feeling peckish, order one of the burgers with a side of their killer sweet potato fries. 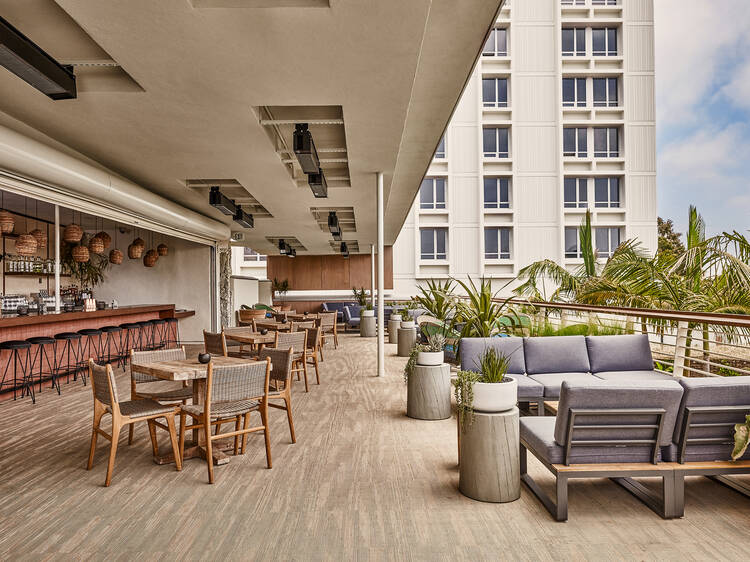 Located inside Westchester’s Hotel June, Caravan Swim Club has one of the best poolside patios in the city. This Super Bowl Sunday, they’re hosting a viewing party alongside weekend brunch, which will include game day specials like street-style hot dogs and a sampler bucket of locally made beers. 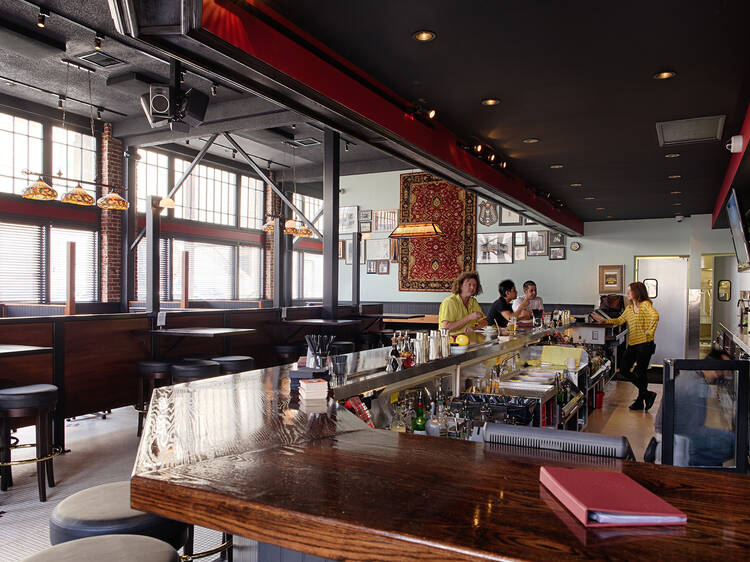 Both the Highland Park and Glendale locations of this neighborhood bar and eatery will be open for the Super Bowl, with several TVs and a massive pull-down screen at each outpost streaming the game. The reliable spot’s wings, pizzas and beers make it an excellent option for in-person viewing. 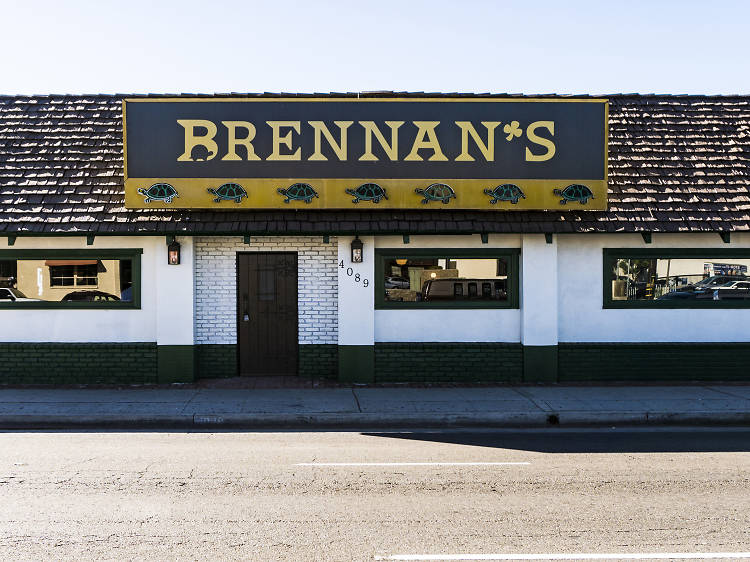 Known among Westsiders for its weekly turtle races, this Marina del Rey sports bar has a massive outdoor patio and an extensive craft beer list, plus the requisite numbers of TVs all turned to the Super Bowl. If you’ve been roped into watching the game, the bar also has games of cornhole going on the green and an indoor pool table. 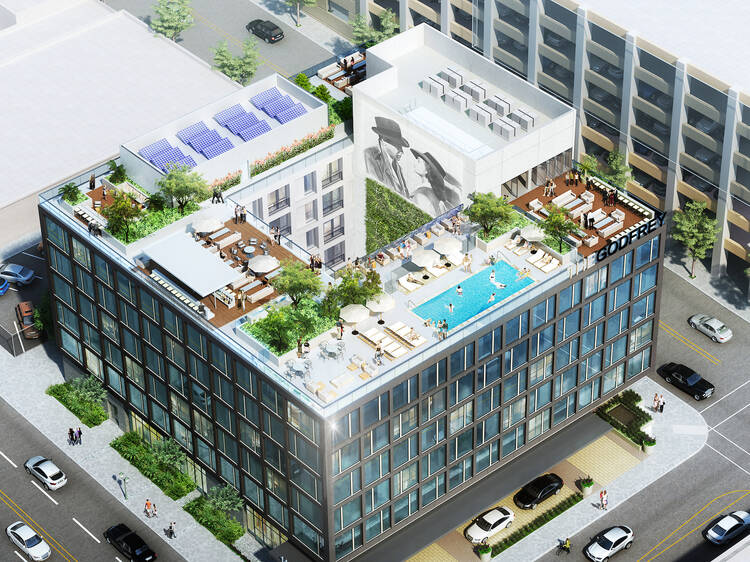 The heart of Hollywood might not be everyone’s cup of tea, but if it’s yours, this brand-new hotel’s rooftop bar will serve up Super Bowl specials like chicken wings, hot dogs and brats as the game streams onto a 70-foot-tall projection screen in the hotel’s interior courtyard. 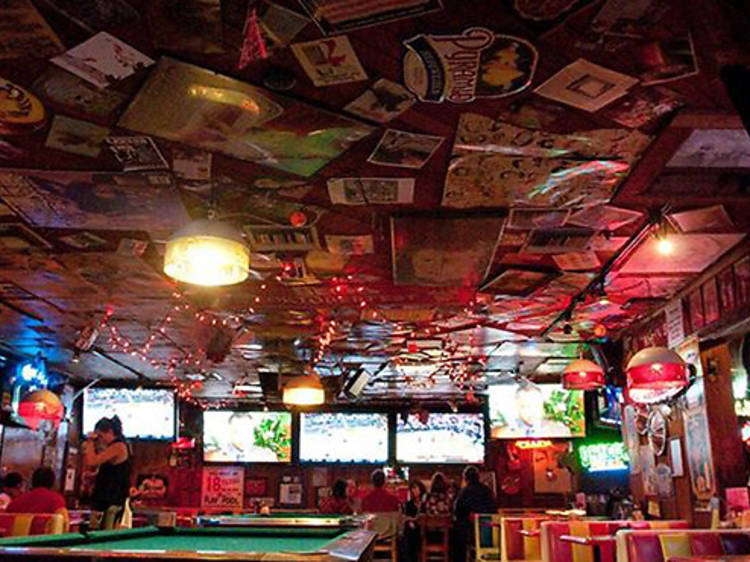 The West Hollywood location is the original outpost of this mini-chain, but you can also find Barney’s in neighborhoods across L.A.: Pasadena, Westwood, Burbank and Santa Monica. It’s a never-fail kind of L.A. sports bar, and a worthwhile one for the Super Bowl. Each location has dozens of TVs, plenty of beer options, decent snacks like wings and nachos, plus Barney’s now-iconic tacky-on-purpose look, with everything from license plates to sports memorabilia hanging from the walls.