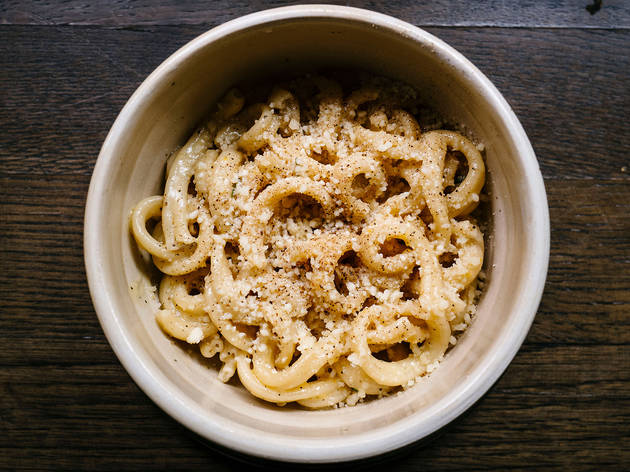 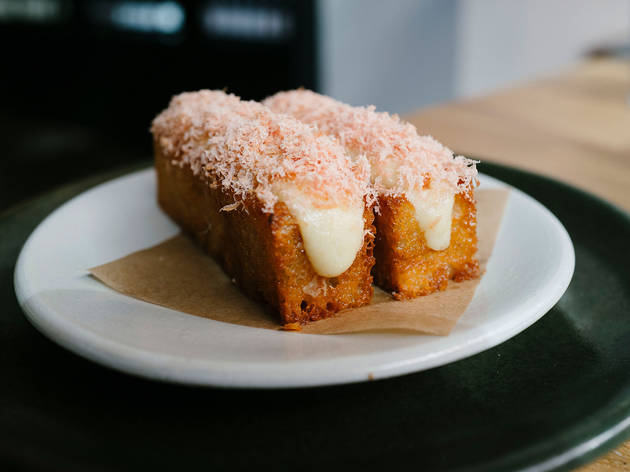 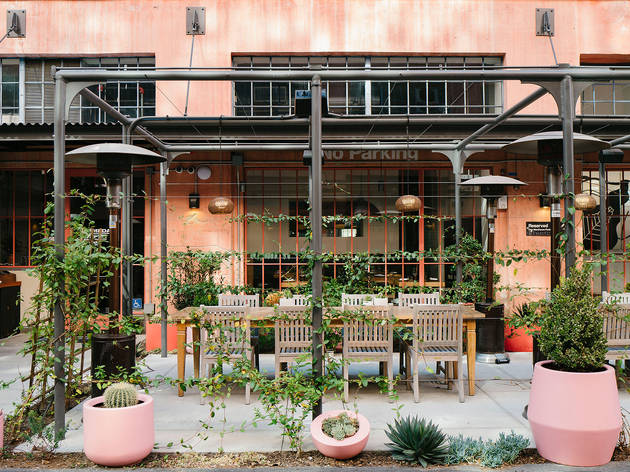 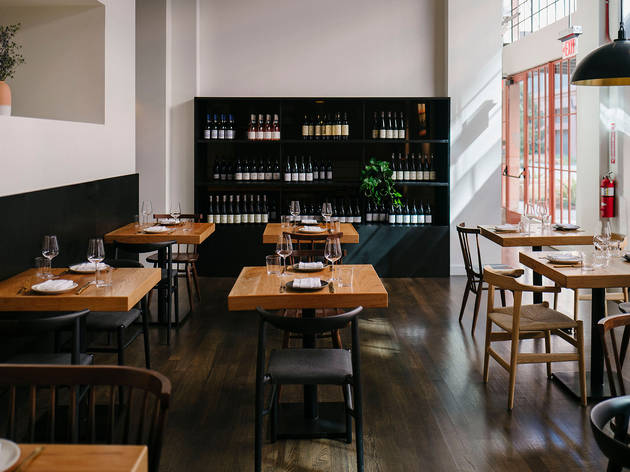 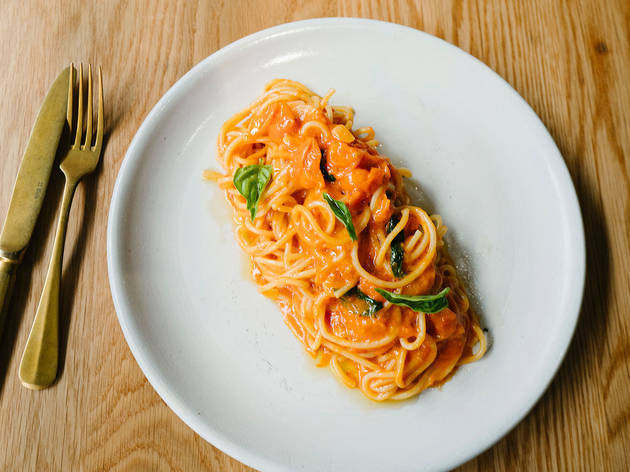 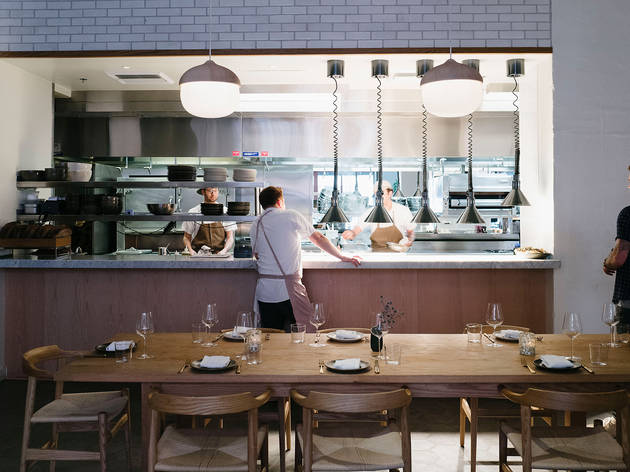 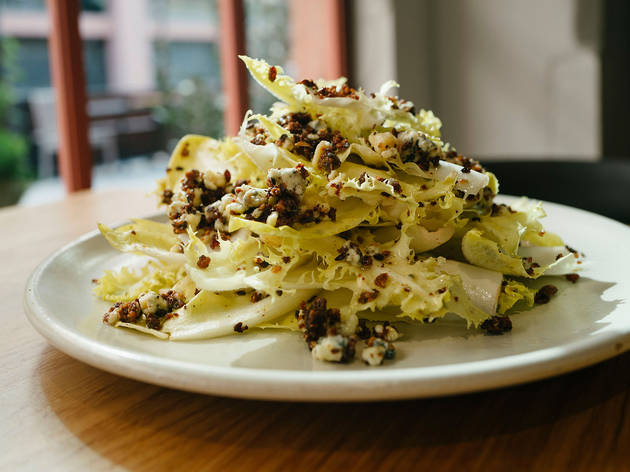 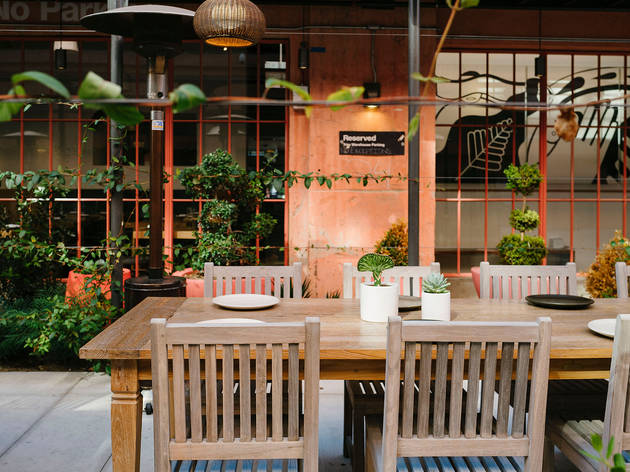 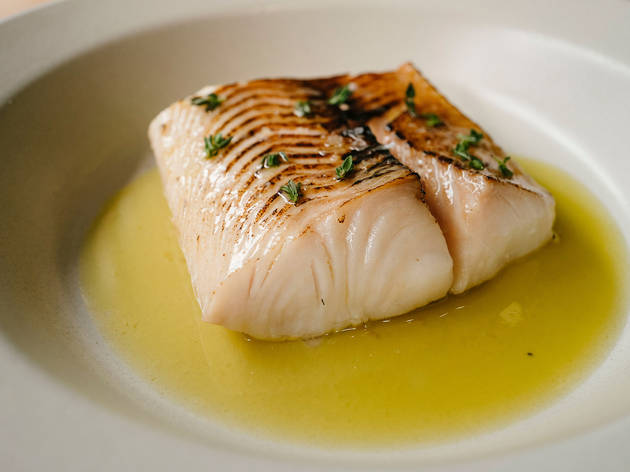 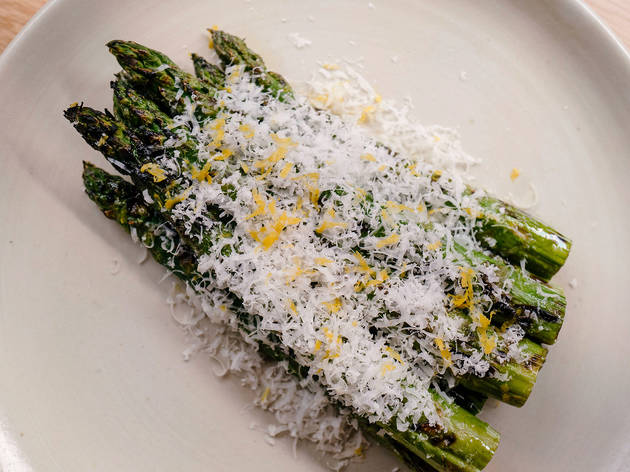 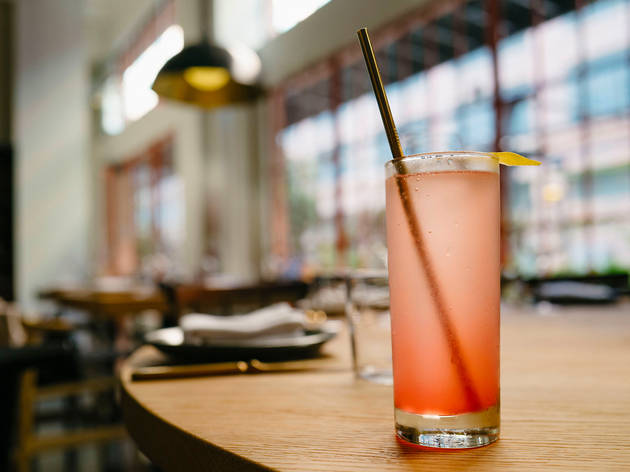 11/15
Photograph: Jesse HsuYou can cool down this summer with one of ASC's non-alcoholic concoctions. 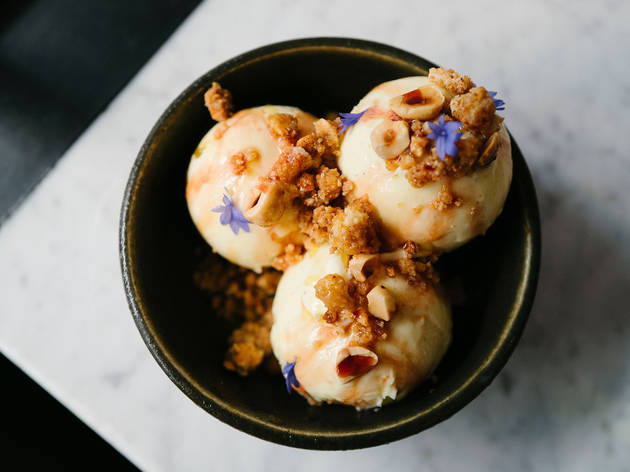 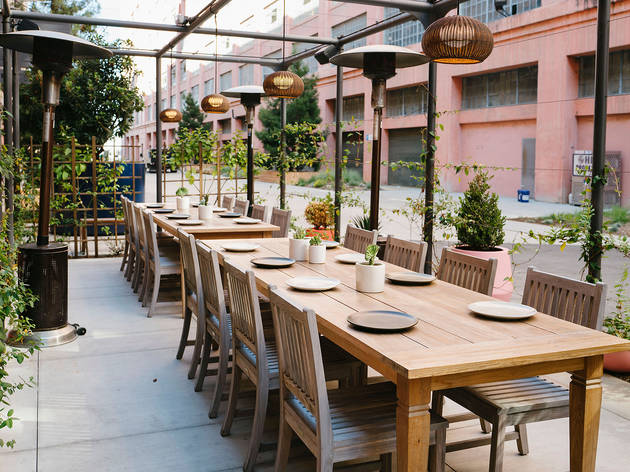 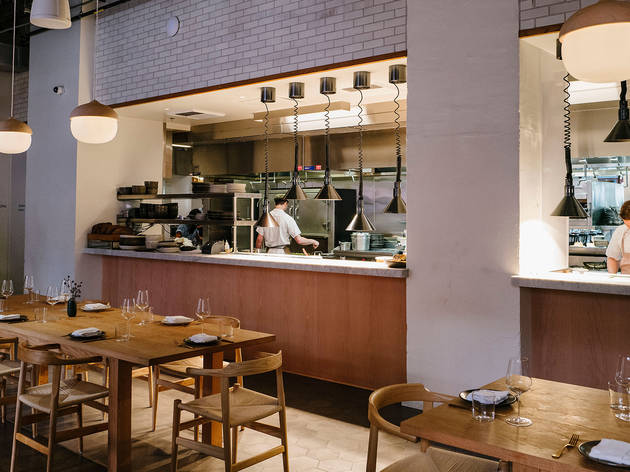 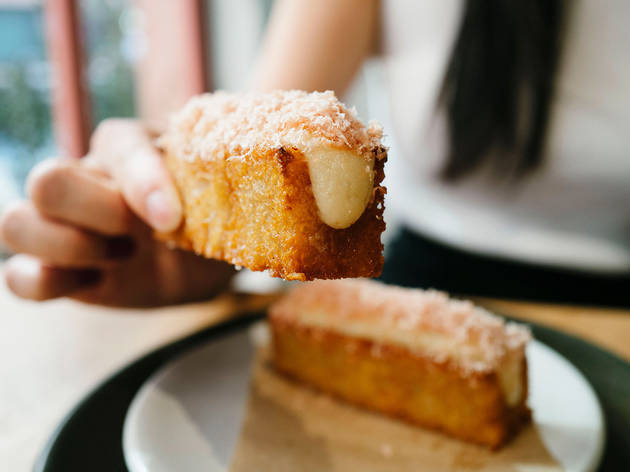 The Manufactory's latest powerhouse restaurant is off to a good start, if a safe one.

For a restaurant that just hit the tarmac, Alameda Supper Club is already operating like a well-oiled machine. There’s little surprise there, given the team and ambition that led to the creation of the Manufactory, the ROW’s culinary complex in which this restaurant sits: Elisabeth Pruett and Chad Roberston of San Francisco’s Tartine, paired with Chris Bianco of Phoenix’s legendary Pizzeria Bianco, have created a space that, while cavernous, is immediately inviting—and already proving to be a popular and dependable destination.

That dependability can be seen in Alameda Supper Club’s short menu, too. With a few exceptions, the food was more than competently prepared, and the ingredients were obviously sourced from terrific suppliers. However, apart from an Italian nod, this particular restaurant’s dishes don’t seem to have much of a viewpoint and operate at a “let’s not frighten granny” level of excitement.

The cheddar and smoked ham toast ($7) is already becoming an Instagram favorite, and I can understand why: It’s a fun upgrade of a grilled cheese sandwich, and was certainly more successful than our other starter, a rather dull bowl of pork crackling ($6) that had been overdosed with smoked paprika.

Of the small plates, the market charcuterie ($18) was enjoyable enough but should be filed under the “bought and sliced” category, but a salad of coraline endive with rye croutons, Colston Bassett cheese and a roasted-shallot vinaigrette ($14) proved that the kitchen can take something quite simple and turn it into a dish good enough to be the first thing ordered on a return visit. The balance of the saltiness of my favorite stilton against the crunch of croutons, the slight bitterness of the endive and the acidity of the dressing was a perfect combination.

Both pasta dishes we tried showed a kitchen that knows what it’s doing. The strozzapreti with sheep’s milk cheese, preserved Meyer lemon and black pepper ($22) was rich, thick and gooey. Better still was a first-rate dish of spaghetti ($26), cooked to the perfect bite and flecked with green garlic, chile de arbol and sizeable chunks of Dungeness crab.

The larger plate of black cod with colatura and thyme ($38) exemplifies most, I think, what the menu at Alameda Supper Club is trying to achieve: simple dishes well-conceived and beautifully executed. Fish cooking in L.A. restaurants can be inconsistent, to say the least, but here, the kitchen prepared the dish absolutely spot-on, allowing the fish to flake at the press of a fork. The dressing of coltura—a sauce drawn from cured anchovies—added the perfect seasoning, and the specks of fresh thyme gifted both texture and subtle flavor.

Sadly, the same could not be said of the lamb belly with salsa verde, cumin and coriander ($36), where the latter two ingredients dominated and the salsa verde didn’t contain enough acidity to slice through the fattiness of this particular cut of meat. It didn’t help that two side dishes also received a pretty firm thumbs down: The kitchen had a heavy hand with the oil when preparing the mushrooms, rosemary and oregano oil ($12)—resulting in the vegetables becoming nothing but lumps of texture—and, while I understand the benefits of charring asparagus ($12) on the grill, slathering an excess lemon and cheese reduced the spears to little more than vehicles.

I am a sucker for great vanilla ice cream. Alameda Supper Club tops theirs ($12) with balsamic vinegar, orange-anise crumble, hazelnuts, olive oil and Maldon salt—a dessert so good that I would go there, sit at the bar with a cocktail and just order repeated bowls of it until they ask me to leave.

Service here is charming and efficient, and on both of our visits, we felt like we were in safe hands from the moment we arrived to the time we departed. There’s much to like about this restaurant, and I am sure I’ll be returning for a meal when what’s needed is simple, well-prepared food.

The kitchen seems up to handling a more elevated task if they chose to go that way, and part of me wishes that they would. The Manufactory is an extraordinary achievement and deserves, I think, menu ambition that matches it. Alameda Supper Club seems to have slipped straight into gear soon after its opening; unfortunately, it’s as yet only second gear.

As summer hits us, the patio and bar spaces of Alameda Supper Club are the places to be. The inside of the restaurant is bright and L.A.-noisy, and the tables near the open kitchen are a great spot to see the chefs operating at full throttle. However, I have to admit I prefer the smaller and slightly quieter room near the entrance for my dining experiences.

Begin with the cheese and smoked ham toast and follow that with the excellent endive salad, sizeable enough for two to share. Likewise, split a dish of the spaghetti and choose the black cod as your entrée. Make sure you finish with a dish of their rather glorious vanilla ice cream.

The cocktail menu at ASC was put together by mixology heavyweights—Nick Meyer, Julian Cox and CJ Catalano—so unsurprisingly, the mixed drinks are superb—including the nonalcoholic ones. Given the Italian influences in the food, the wine list leans that way, too, and there are bottles that should suit most budgets. A bottle of Nero d’Avola’s Spaccaforno ($60) served well throughout the meal; there’s also a decent selection of digestifs that I was glad to see included: decent cognacs and eau de vie, as well as the inevitable amaro.