Step back into the ’30s with a visit to these classy structures, the most beautiful Art Deco buildings in L.A.

Of all the Los Angeles architecture styles, none conjure up the sense of starry-eyed luxury like Art Deco. The movement arose in the 1930s, which explains why we associate it so closely with the glamor of the Golden Age of Hollywood.

Though we mainly think of Machine Age metallic finishes, angular geometry and Cubist and Futurist-influenced details, the architectural movement inspired many different interpretations, from “exotic” inflections—think the Chinese Theatre and Egyptian Theatre—to the late-era shift toward Streamline Moderne—like the Coca-Cola Building and Queen Mary.

It seems insane to us now, as we regard many Art Deco structures among the city’s most beautiful buildings, but the style had fallen out of fashion by the end of World War II. Though many structures were stuccoed over or demolished, these examples of the most beautiful Art Deco buildings in Los Angeles remain.

The 11 most beautiful Art Deco buildings 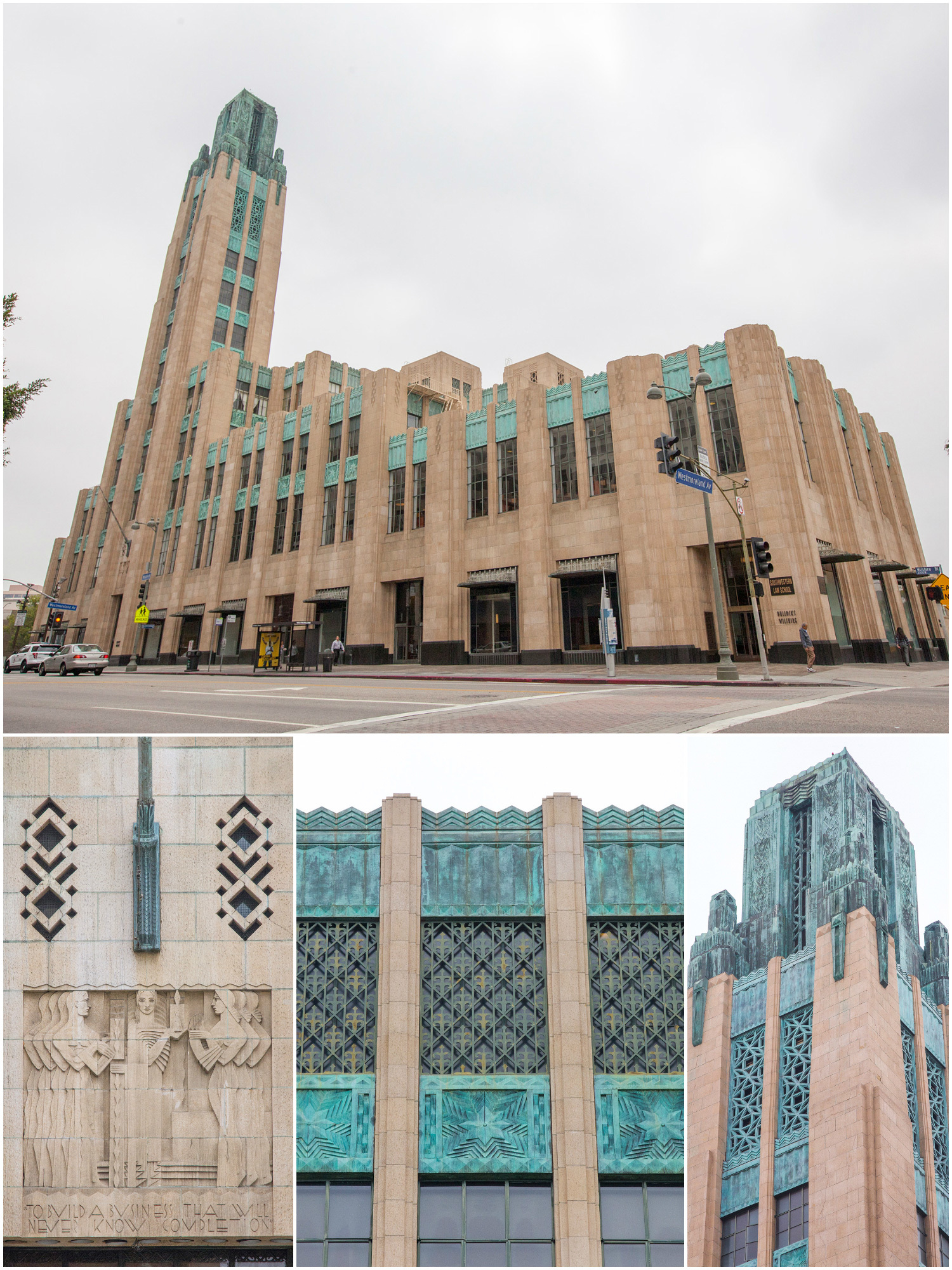 High-end department stores have dwindled, Westlake is no longer the lap of luxury and the copper turret on the Bullocks Wilshire has since tarnished green—but none of that diminishes the elegance of this Art Deco landmark. It was a department store built for the car, and even though its cash registers have been shut for two decades (now it’s a law school), its poise and strong vertical lines still catch motorists’ eyes. 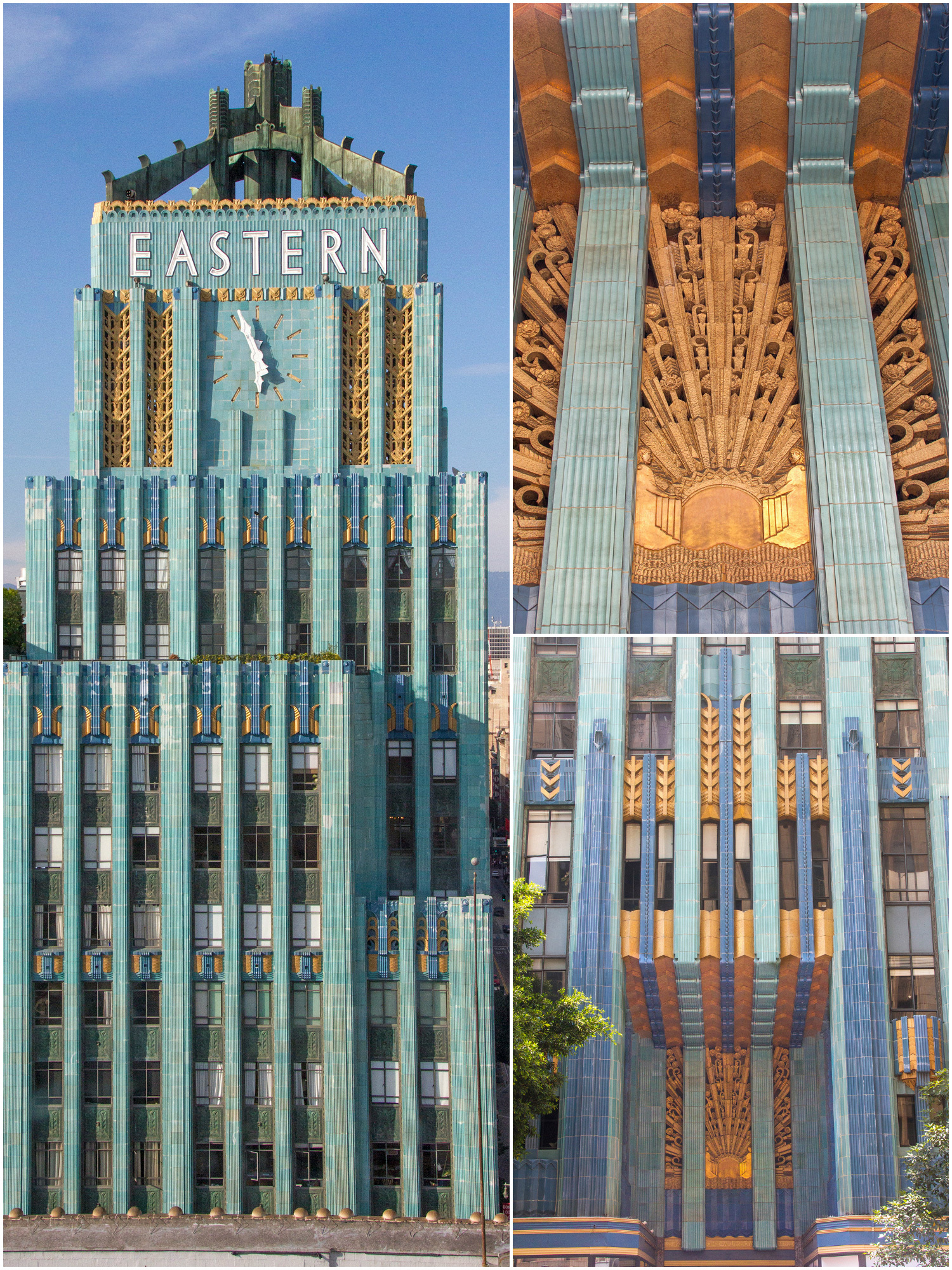 As Broadway continues to bounce back, the Eastern Columbia Building stands as a reminder that the Downtown street has always been beautiful. The stunning Art Deco tower never seemed to make its way into L.A. iconography, but since a major 2004 renovation, it’s become a beloved landmark for Angelenos. The turquoise finish, terra cotta sunburst over the entrance and the blue glow of the clock tower are all headturners. 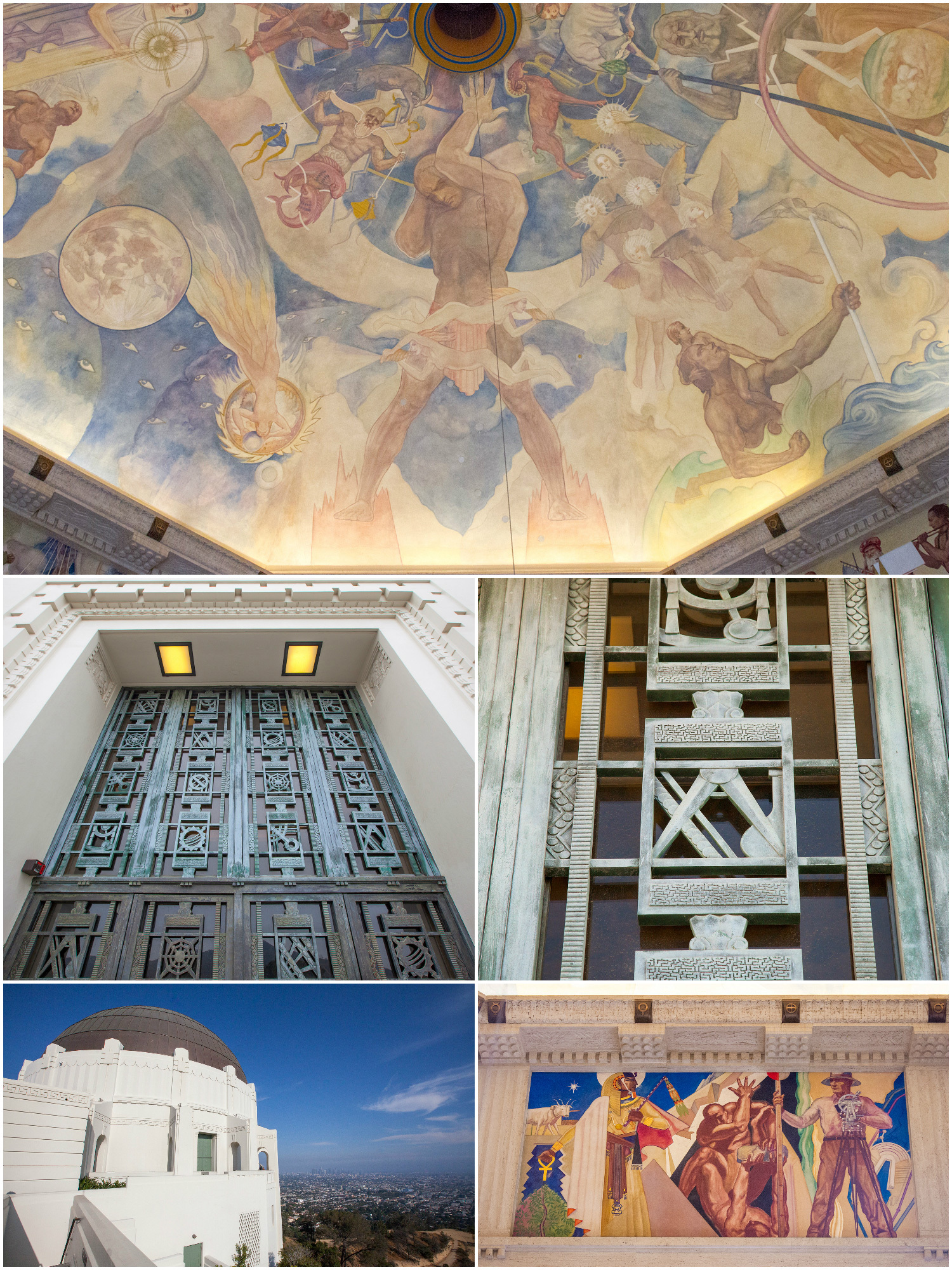 "If all mankind could look through that telescope," declared Griffith J. Griffith, "it would change the world." We think a simple trip to the hilltop scientific sanctuary is enough to do the trick; the dignified building exudes quiet and calm as Los Angeles twinkles below. Inside, a stunning set of Hugo Ballin murals flanks the rotunda’s vaulted ceiling. Back at ground level, the illuminated white building and its trio of copper-clad domes is an inspirational landmark—what other modern metropolis can boast an observatory as a focal point of its skyline? 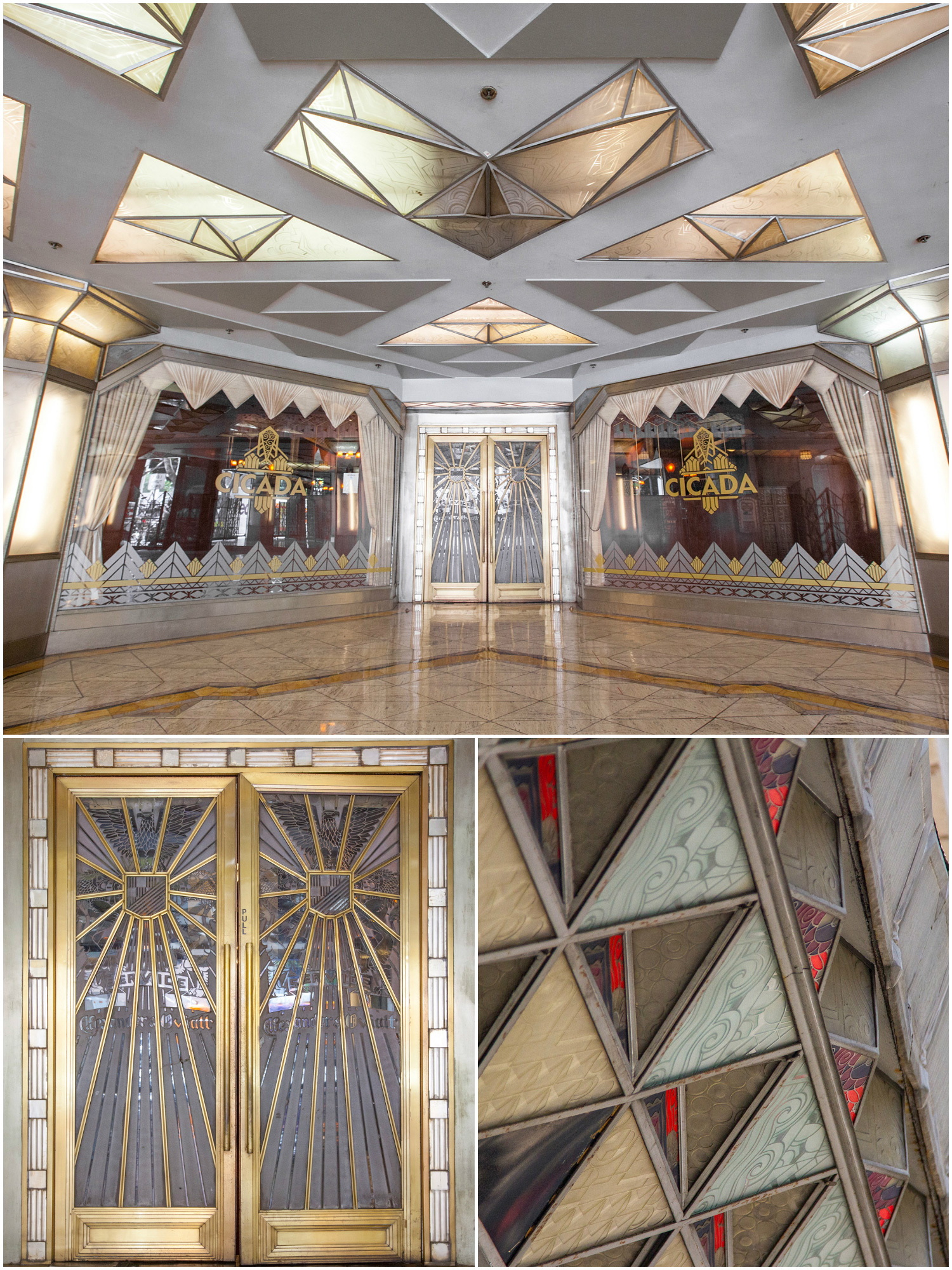 The Oviatt Building’s facade may not call as much attention to itself as some other Art Deco structures, but look lower down and you’ll spot easily the glitziest gate and foyer in the city. The ground floor forecourt exudes French flair from its triangular, swirling glass cutouts. Push open its golden doors and you’ll find yourself inside one of the classiest supper clubs in town. 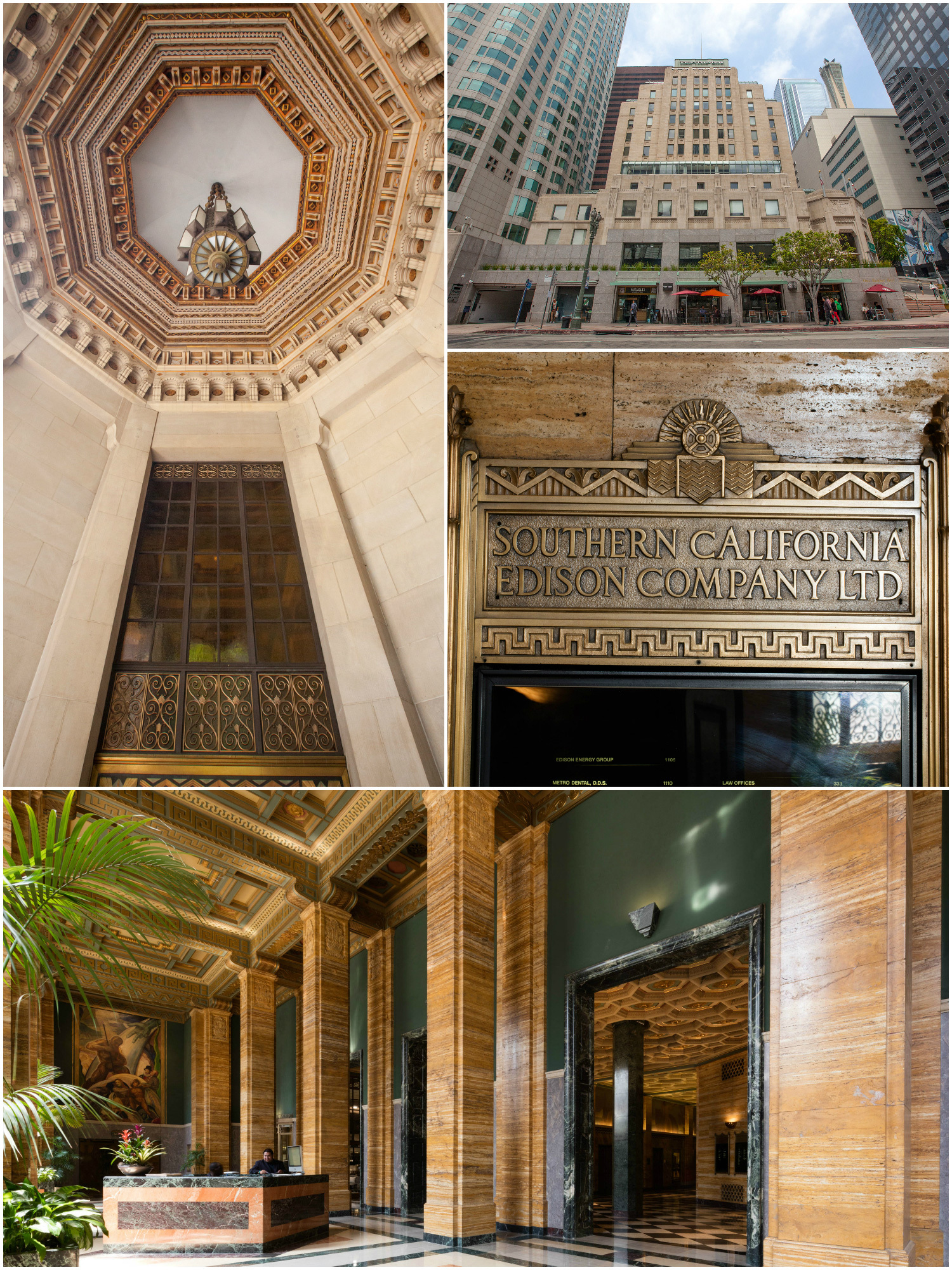 Though these days it sits in the shadow of the US Bank Tower, the former Southern California Edison Co. headquarters once pushed up against the city’s 13-story height limit. The 1931 structure features multiple setbacks that stack up into a classic, sately appearance, aside from the 1980s addition of greenhouses—which are due to be converted back to open air patios. Make sure to look up toward the reliefs and ceiling of the entrance rotunda, and step inside the lobby to find a majestic mix of different types of marble. 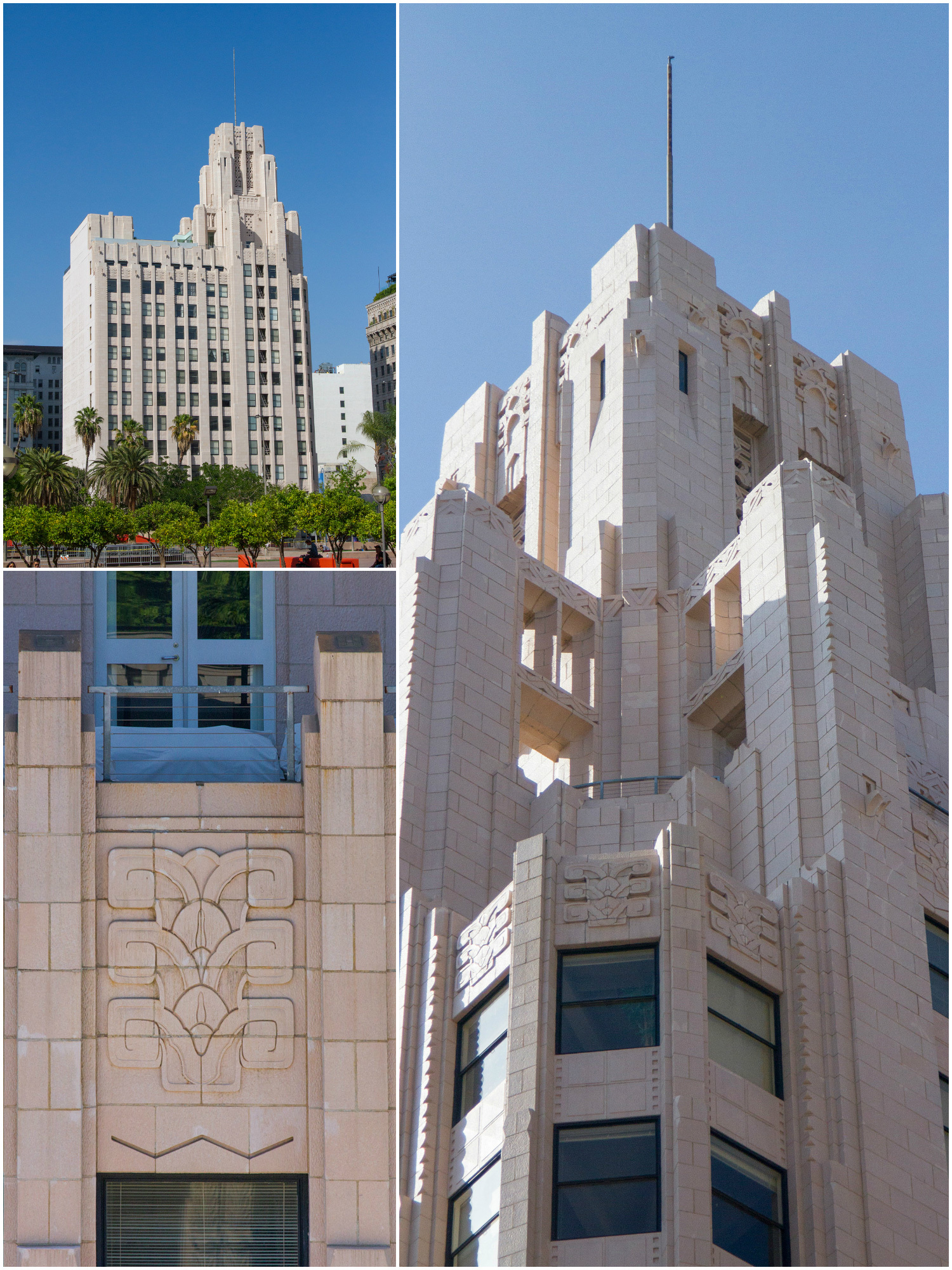 This graceful structure from architects John and Donald Parkinson immediately draws the eye upward. Its most distinctive feature is its gothic tower—you’ll have a head-on view from atop Perch—but the details are decidedly deco. Inside, you’ll find a half-dozen historic murals by Hugo Ballin. 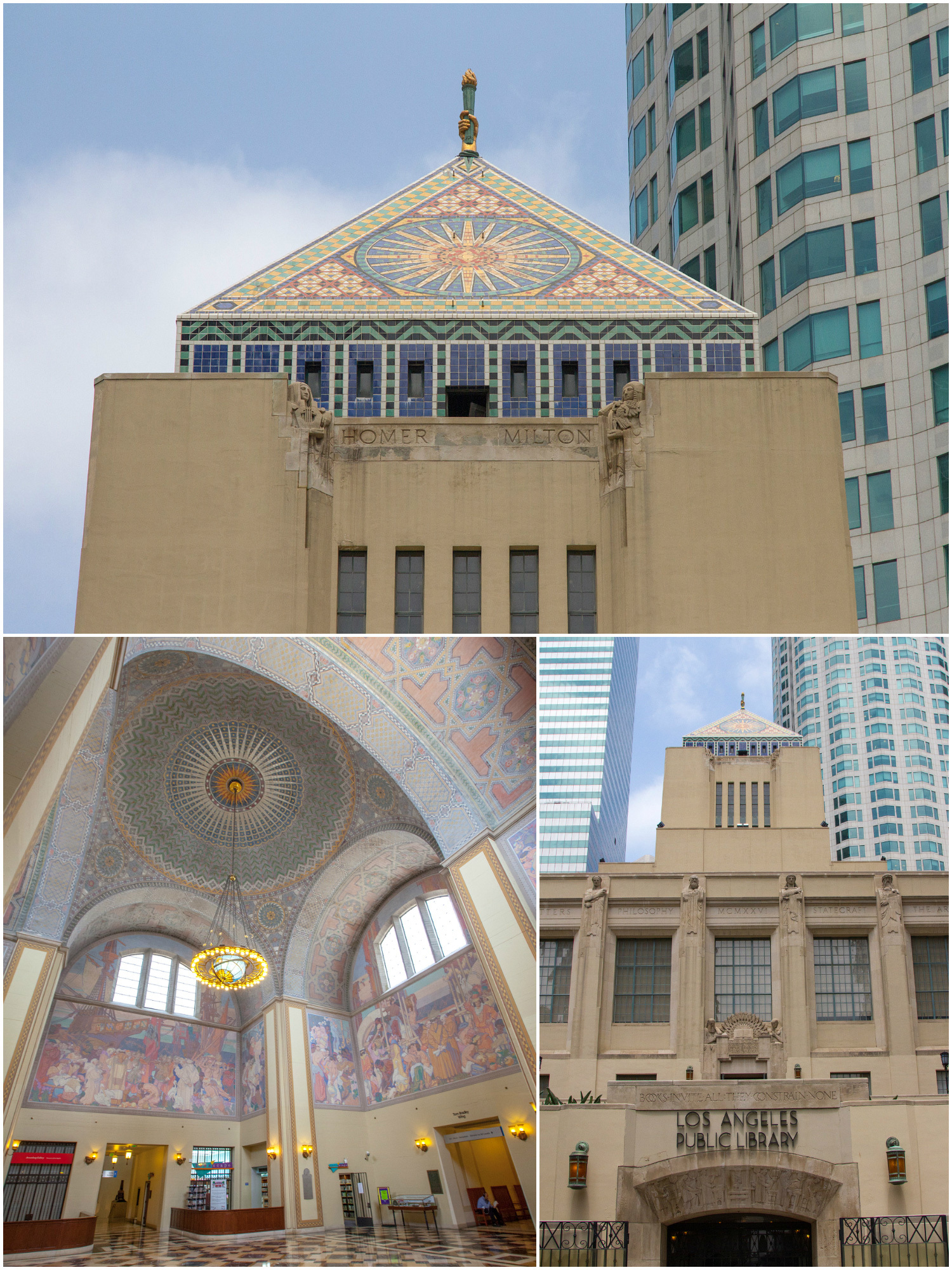 The city’s main library is worth a look even if you’ve no interest in borrowing books. The exterior is an Egyptian and Mediterranean beauty, topped with a dramatic, tiled pyramid tower and decorated with bas-reliefs. The most stunning features, though, reside in the second floor rotunda, with its deco-meets-arabesque dome, California history mural and globe chandelier. 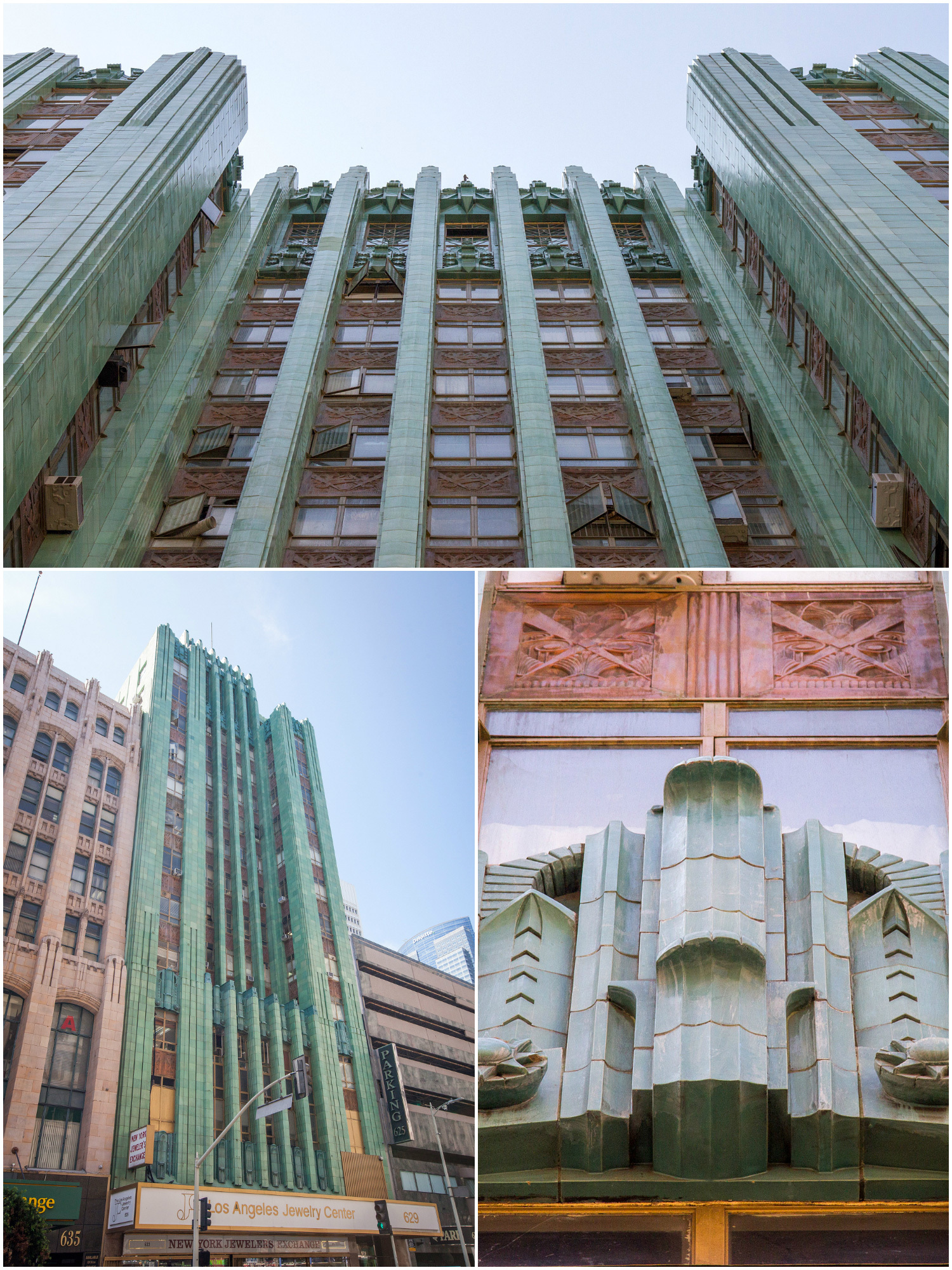 Art Deco buildings washed in a coat of color were once the standard in L.A. But these days, Claud Beelman’s green terra cotta design for the Los Angeles Jewelry Center is one of the few remaining examples. Though many of the deco details have been scrubbed on the inside, the exterior—at least above the ground floor—looks much like it did in 1931. 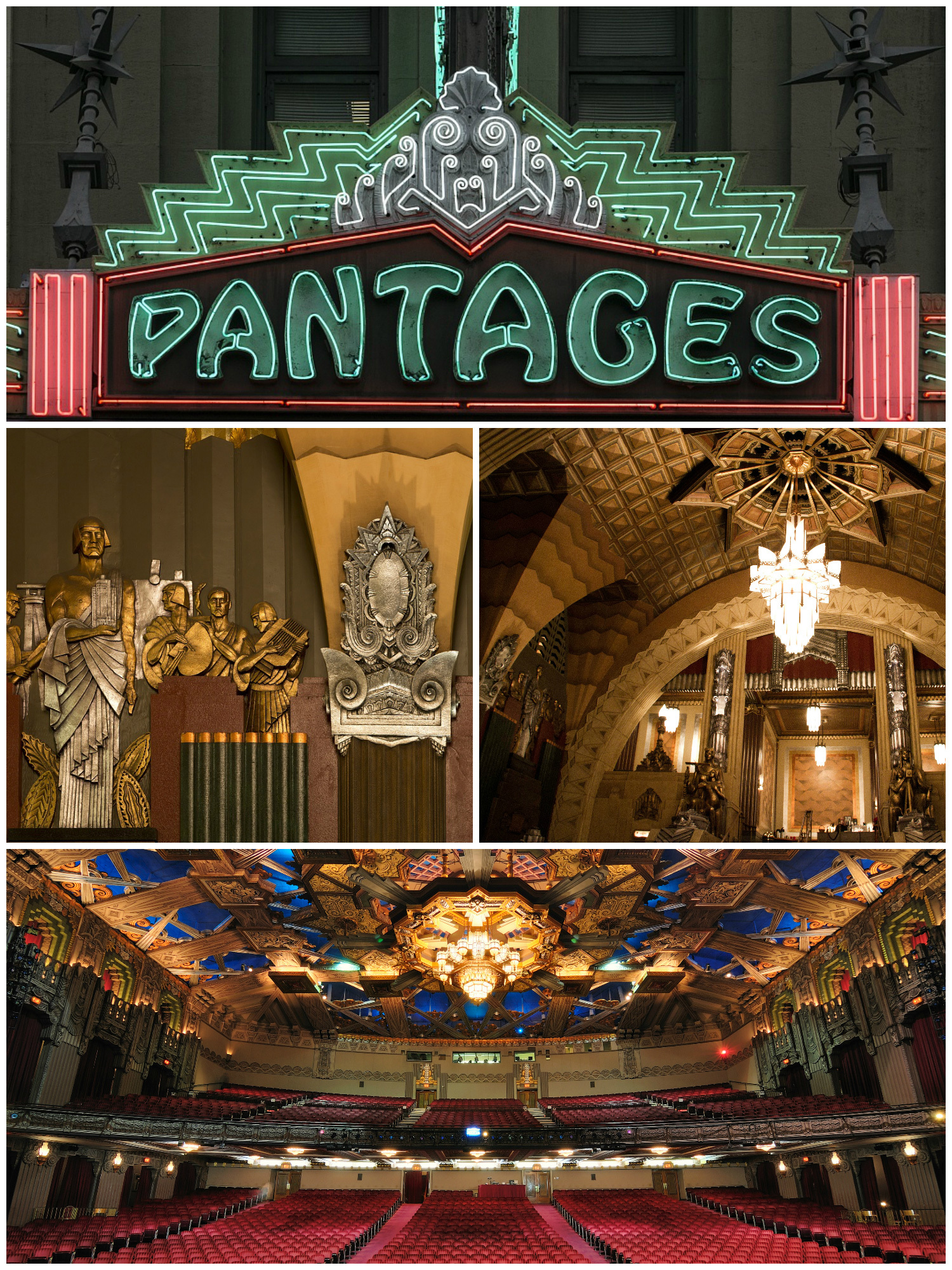 The only thing more over-the-top than this theater’s big-budget musicals is its Art Deco decor. The former movie palace’s vaulted lobby is lined with gold, silver and bronze statues. You’ll find chevrons and swirls at every turn, but the theater’s absolute stunner is the sharp starburst chandelier that engulfs the auditorium’s ceiling in a golden latticework.

The Wiltern Theatre and Pellissier Building 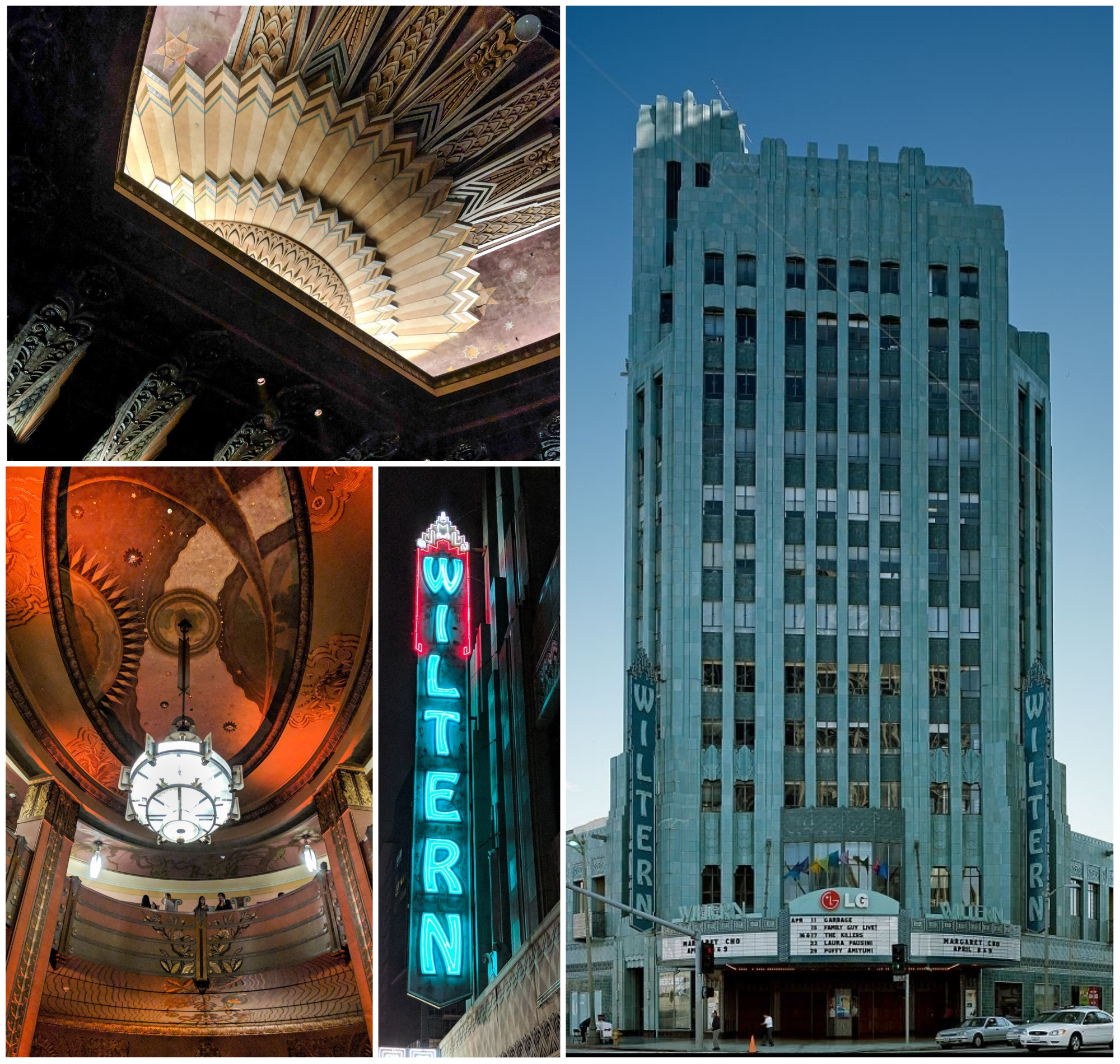 The Wiltern’s biggest draw is its marquee—or rather the popular music acts whose names fill it each week. The blue-green terra cotta of the adjoining Pellissier Building is a K-town landmark, but its interior earns its reputation as an Art Deco gem. The oval lobby feels as if you’ve stepped inside of a jewelry box, while the ornate auditorium dazzles with its details, namely the sunburst on the ceiling—looking closely and you’ll find that each ray resembles a skyscraper. 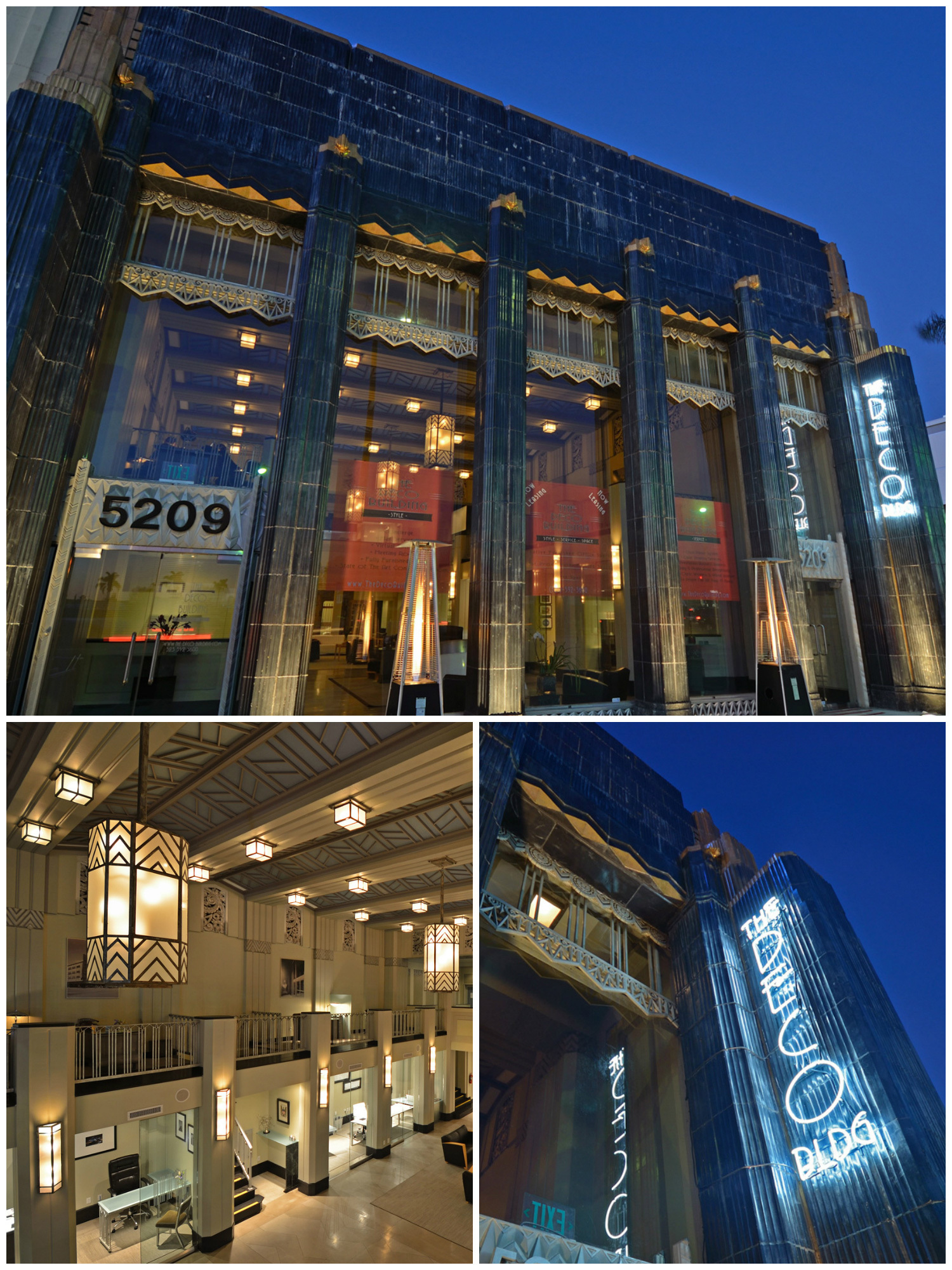 Though Morgan, Walls & Clements’ iconic Richfield Oil Tower was demolished in the name of progress, their similarly designed black-and-gold (albeit much smaller) office space still stands. The high contrast facade is the most striking feature, but so too are the deco adornments throughout the building’s interior.