The 7 best skateparks in Los Angeles

Take your skateboarding skills to the next level with a ride at one of these top L.A. skateparks

What do surfing, sunshine and skateboarding have in common? It’s all quintessentially Southern California. But when it comes to skateboarding, the roots can be traced straight to Los Angeles. Thanks largely to a group of misfits from Santa Monica and Venice, also known as the Z-Boys, skateboarding transformed from a hobby to a global phenomenon back in the ’70s. The hyper-talented band of surfers turned their attention away from the waves to the streets, and thus began a skateboarding revolution. It has since paved the way for skateparks to pop up all over Los Angeles (now totaling over 20) and beyond. Whether you’re looking to kick it at an old-school concrete jungle or keep up with the pros at a popular plaza, the best skateparks in Los Angeles give you options aplenty—many of which were designed in part by skateboarding legends themselves. 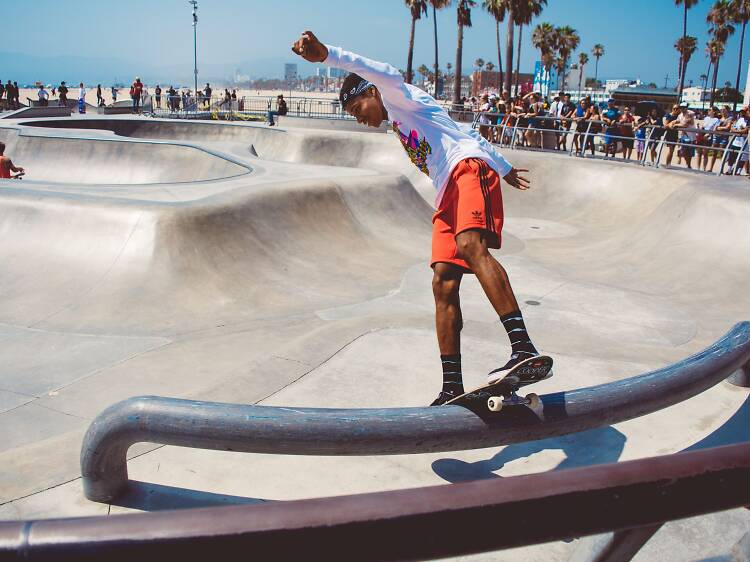 With the Pacific Ocean on one side and the famed Venice Boardwalk on the other, the location of this popular skatepark doesn’t get much better. Ever since its grand opening in 2009, the $3.5-million-dollar project has drawn professionals, amateurs and onlookers alike for its pro-approved grounds, talent and prime location. It’s an epicenter for skateboard culture, and crowds will often form to witness the thrill of it all. Feel the ocean breeze as you glide through 16,000-square-feet of usable space, from a snake run to bowls and a street section (think stairs, railing and benches). Be sure to check out the calendar for major events like the annual Go Skateboarding Day in June. 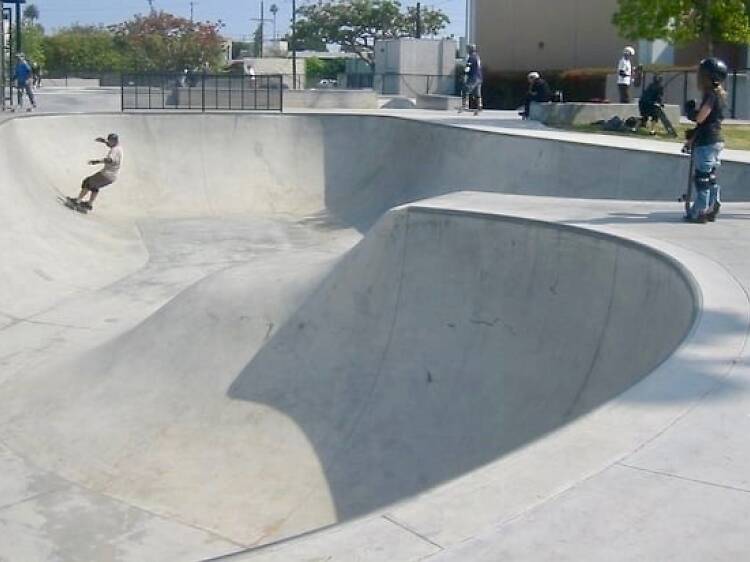 Tucked inside Santa Monica’s Memorial Park, the Cove attracts skaters and bikers of all levels and ages with 20,000 square feet of smooth, rideable concrete. The name of the skatepark pays homage to L.A.’s skateboarding history: The Cove was the name of a popular surf spot at Pacific Ocean Park in the ’70s, where the Z-boys used to shred the waves before turning their attention to skateboarding. Today, the skatepark is equipped with ramps, bowls, stairs and rails. A first-time registration fee and small daily rate is required ($3 to $5), though Santa Monica residents get a discount. 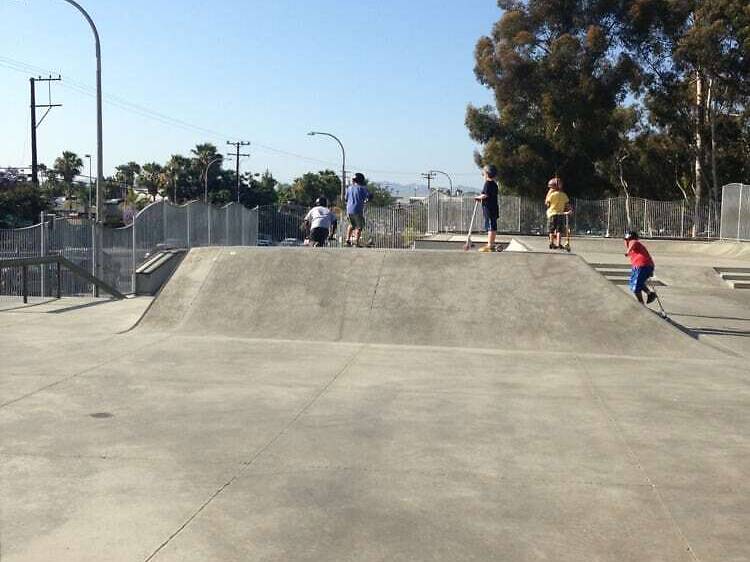 Skateboarding aficionados descend upon this Culver City skatepark for its enticing, trick-inviting features, including a clover pool that boasts a 10-foot deep end and two six-foot pockets. You’ll have over 10,000-square-feet of concrete at your disposal including a street section with ledges, stairs, flow space and more. 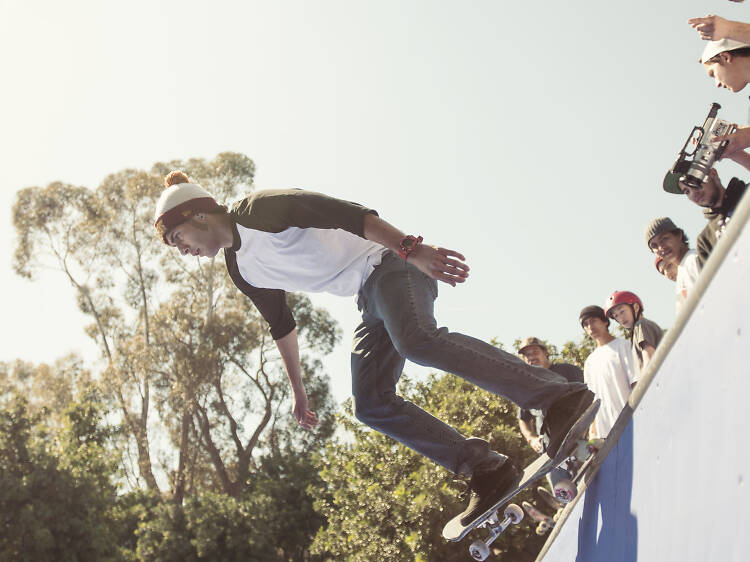 Sharing the grounds with a basketball court, an outdoor swimming pool, barbecue pits, picnic tables and hiking trails galore, this Tony Hawk Foundation-backed skatepark tops off the community park’s many attractions. While the San Pedro skatepark is a bit on the small side at 10,500 square feet, the large snake run, backyard pool and transition elements have continued to bring in locals since its debut in 2014. The project was designed by California Skateparks and legendary professional skateboarder Lance Mountain. 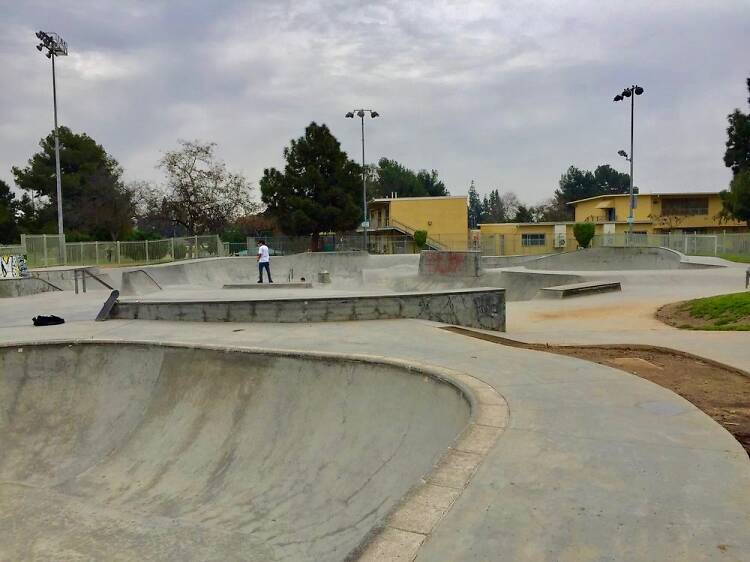 This reported $1.1 million-dollar, 20,000-square-foot skatepark is nestled within 30 acres of East L.A.’s Belvedere Community Regional Park and is free to the public. It is equipped with every obstacle you can imagine, from bowls to a snake run, stairs and railing—ready for you to grab your board and test out your skills. 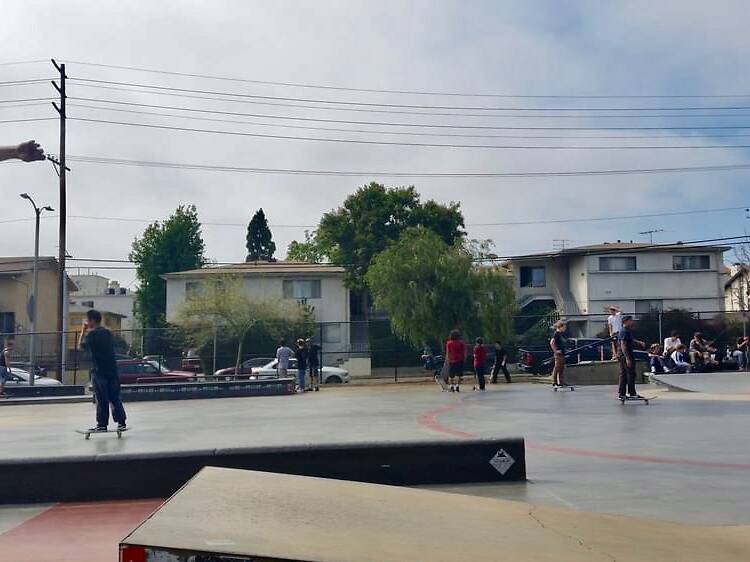 No, it’s not a hub for cannabis enthusiasts, but rather a recreational park named for the street it’s located on: Stoner Avenue. Lauded design firm California Skateparks—the company responsible for building over 350 skateparks around the globe—collaborated with locals to create a neighborhood haven in West Los Angeles. The 20,000-square-foot skatepark features steps, ramps, benches and a distinctive letter “S” stretching from one end to the other—a local touch that acted as an anchor for the overall design. 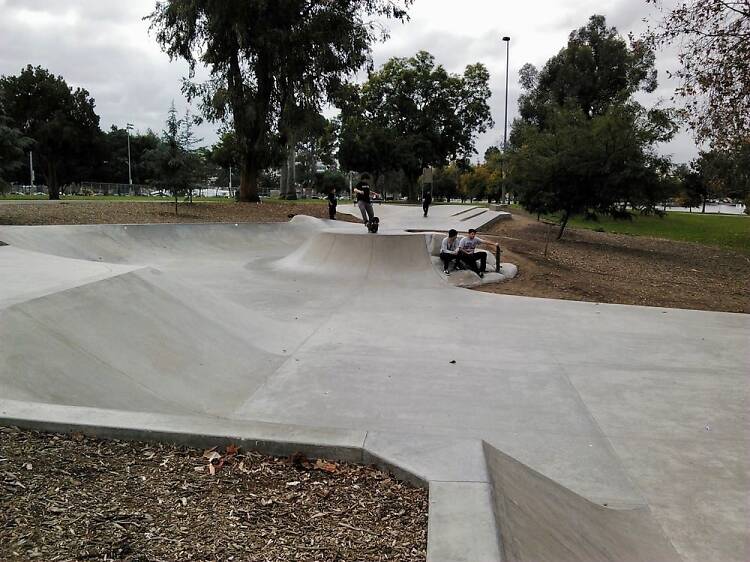 Designed with the help of legend Lance Mountain, this 9,000-square-foot skatepark in East Los Angeles might seem small, but should not be underestimated. The concrete paradise is located on a hill and challenges you with a snake run, railing, ledges, quarter pipes and ramps. You can enjoy other features of the communal park surrounding it like the baseball diamond, basketball court, barbecue pits and large pond. 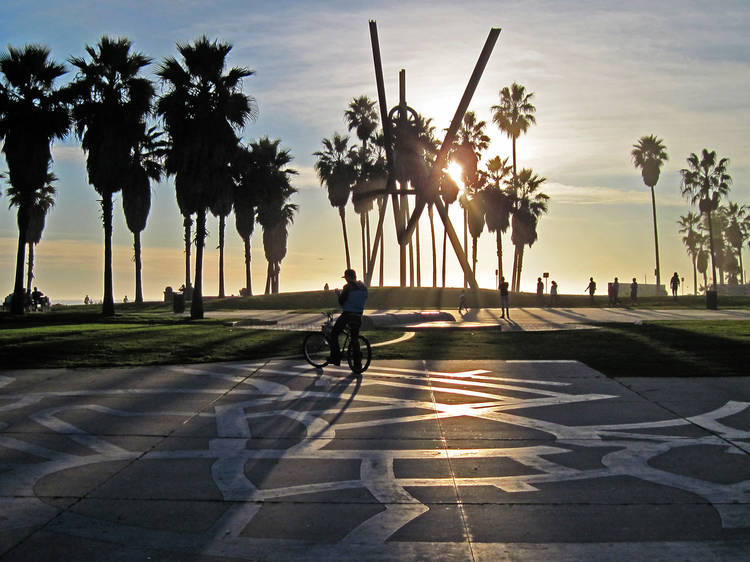 A guide to Venice

Venice, and its eclectic waterfront along Venice Beach, has long staked its claim as L.A.'s sort-of-grimy but beautiful bohemian enclave. Bordered by Santa Monica to the north and Marina del Rey to the south, Venice is the beach town within L.A. city limits. Explore the Venice Boardwalk, high-end yet casual eateries along Abbot Kinney Boulevard and, more recently, the low-key dining scene a couple of blocks inland on Rose Avenue. From rooftop bars to an idyllic canal walk, here's all you need to know about where to eat, drink, shop and stay in Venice.