A guide to Googie architecture in Los Angeles

As freeway construction swelled in the 1940s, so too did Angelenos' love of their cars. Driving all over town—as opposed to walking or taking the street car—marked a fundamental shift in how we saw the LA streetscape. In order to catch motorists' attention, gas stations and coffee shops turned to eye-catching shapes and neon signs—an aesthetic we now know as Googie.

Though your keyboard will insist you're misspelling a popular search engine, Googie is a movement in Los Angeles architecture that arose in the post-war era. The style owes its name to Googies, a former West Hollywood coffee shop designed by local architect John Lautner. The midcentury movement was heavily influenced by the nation's Space Age infatuation with industrial progress, and so sweeping rooflines and hard, geometric shapes worked their way into buildings alongside neon signs with playful starbursts.

Though the flashy style had fallen out of favor by the '70s, Googie still survives in many of LA's retro diners as well as these glorious Googie buildings.

The 10 coolest Googie buildings in LA 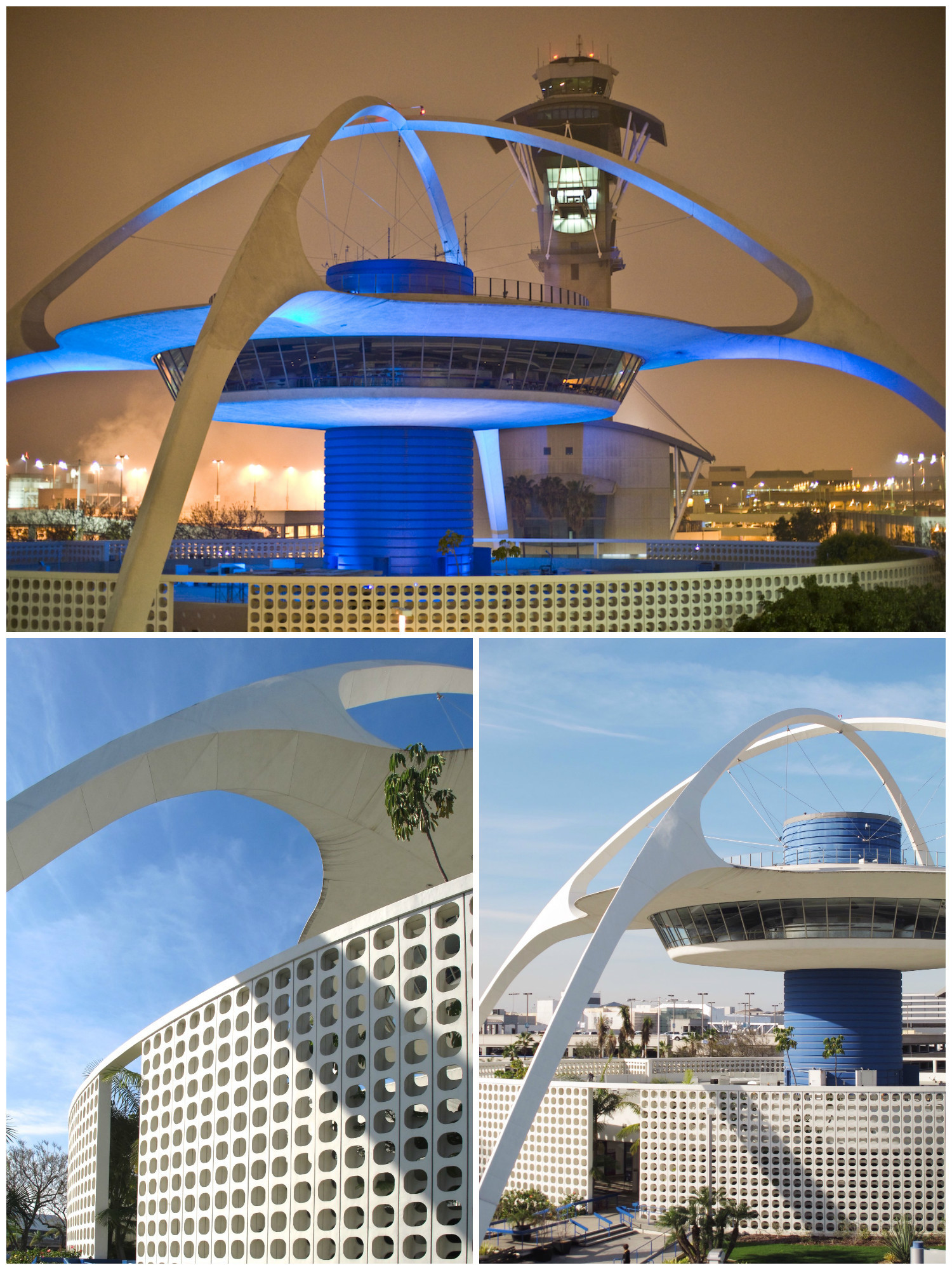 With the Encounter Restaurant closed, the Theme Building has nothing left to do but sit there and look pretty. Well, it’s doing a pretty good job at that; its swooping, flying saucer-like shape is a product of jetsetting culture, a future that never was and one that could still be. 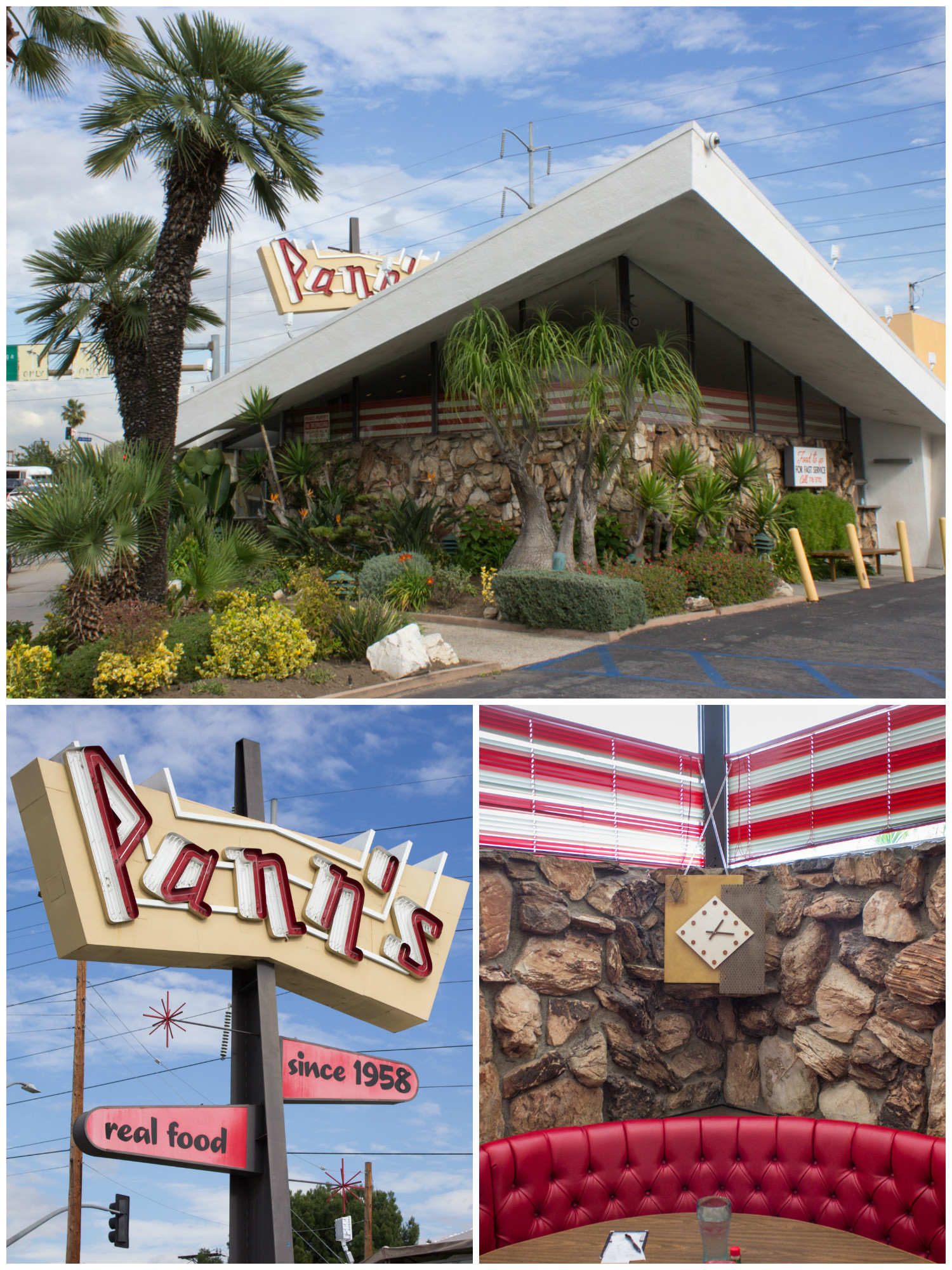 Though the Theme Building may be LA’s most famous Space Age structure, this 1958 diner is just as stunning. All things faceted are in fashion at Pann's: pyramidal lamps, a diamond-shaped clock and an irregular roofline. That same style extends to its expanded patio and the small jungle that surrounds the exterior. The care that’s gone into keeping this family-run restaurant in tip-top shape is evident in everything from its ruby red booths and white bar stools to its perfectly preserved neon sign (with the most delightful little starburst ornaments). 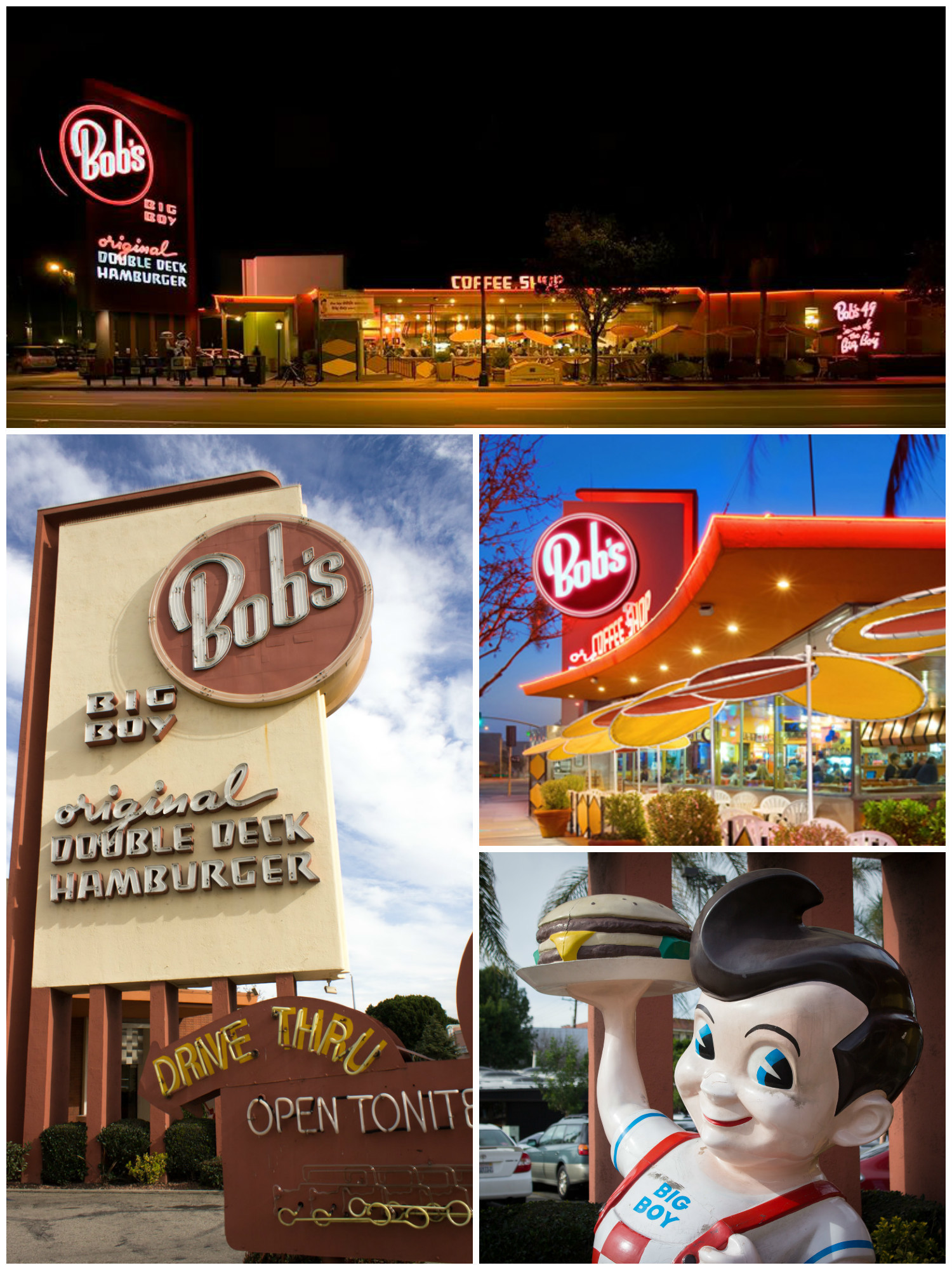 In distinctly Southern California fashion, this Burbank standby built in 1949—it’s the oldest surviving Bob’s Big Boy location—is all about the automobile. Its colossal neon sign and familiar, rotund Big Boy recall a time when roadside restaurants screamed at drivers for their attention. The parking lot might as well be a second dining room, with car hop service on Saturday and Sunday nights as well as a classic car meet-up on Fridays. Inside, a lengthy concave countertop cuts through the comfortable coppertone diner. 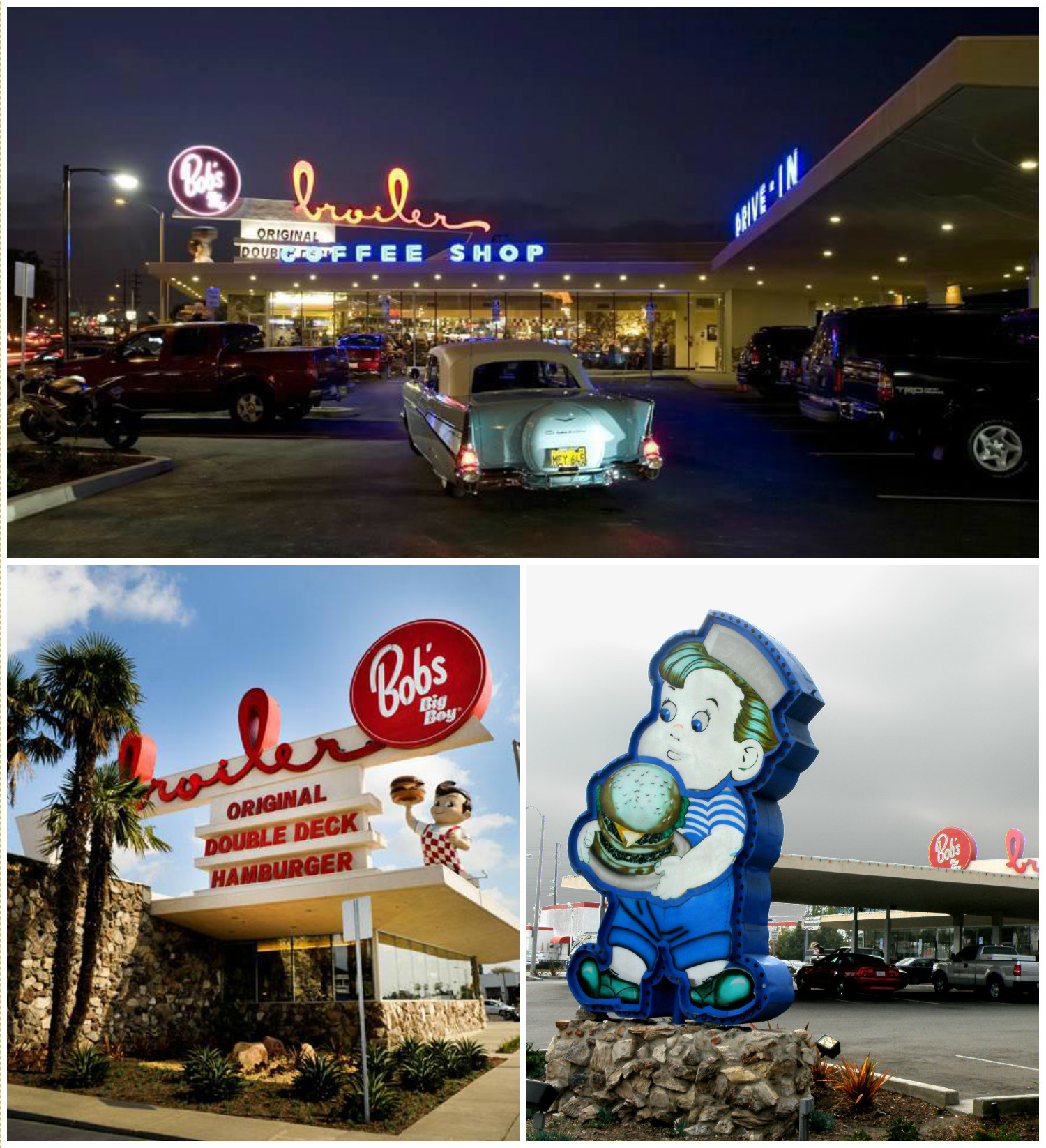 For decades, Johnie's Broiler beckoned motorists with its slimline roof and massive script sign. But an illegal demolition in 2007 left this Googie gem in a pile of rubble. With the help of a Bob's Big Boy franchise owner, the city of Downey and a couple of years of construction, the diner reopened in 2009 after being rebuilt to its original specs. It's not exactly the same as it was—the Johnie's "Fat Boy" mascot has given way to Bob's "Big Boy"—but the building still feels like stepping into a bygone era. 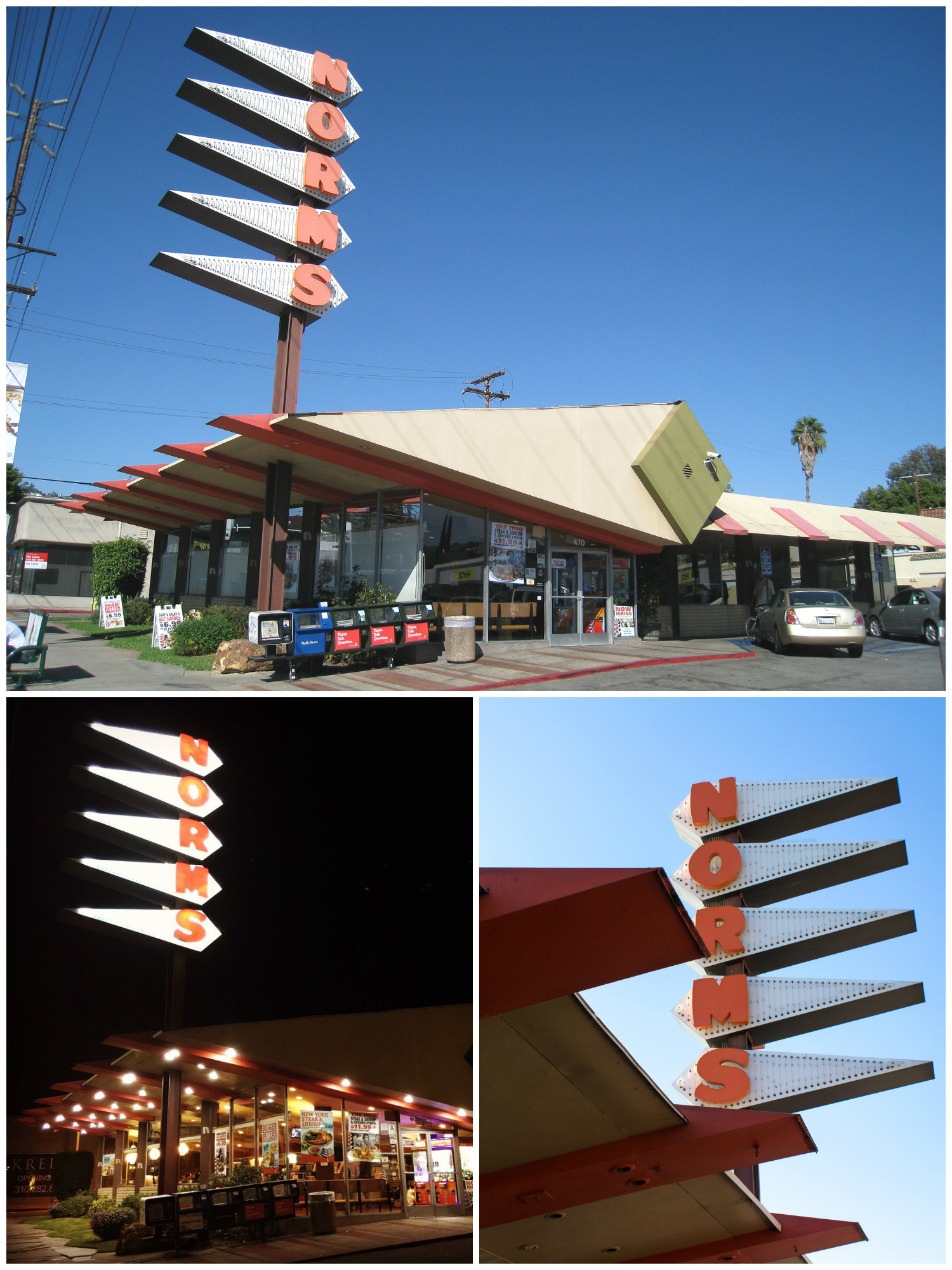 The oldest surviving restaurant in the Norms family, this Googie icon has welcomed drivers along La Cienega since 1957. Though the interior has lost some of its sparkle, its defining features are still in tact: bucket seats, a slanted ceiling and large, zigzagging windows. The car showroom-like exterior is still dazzling thanks to its sharp, pennant-shaped sign and cantilevered roofline. Though the restaurant has changed owners and faced a demolition scare, the building’s future is safe thanks to its recent Historic-Cultural Monument designation. 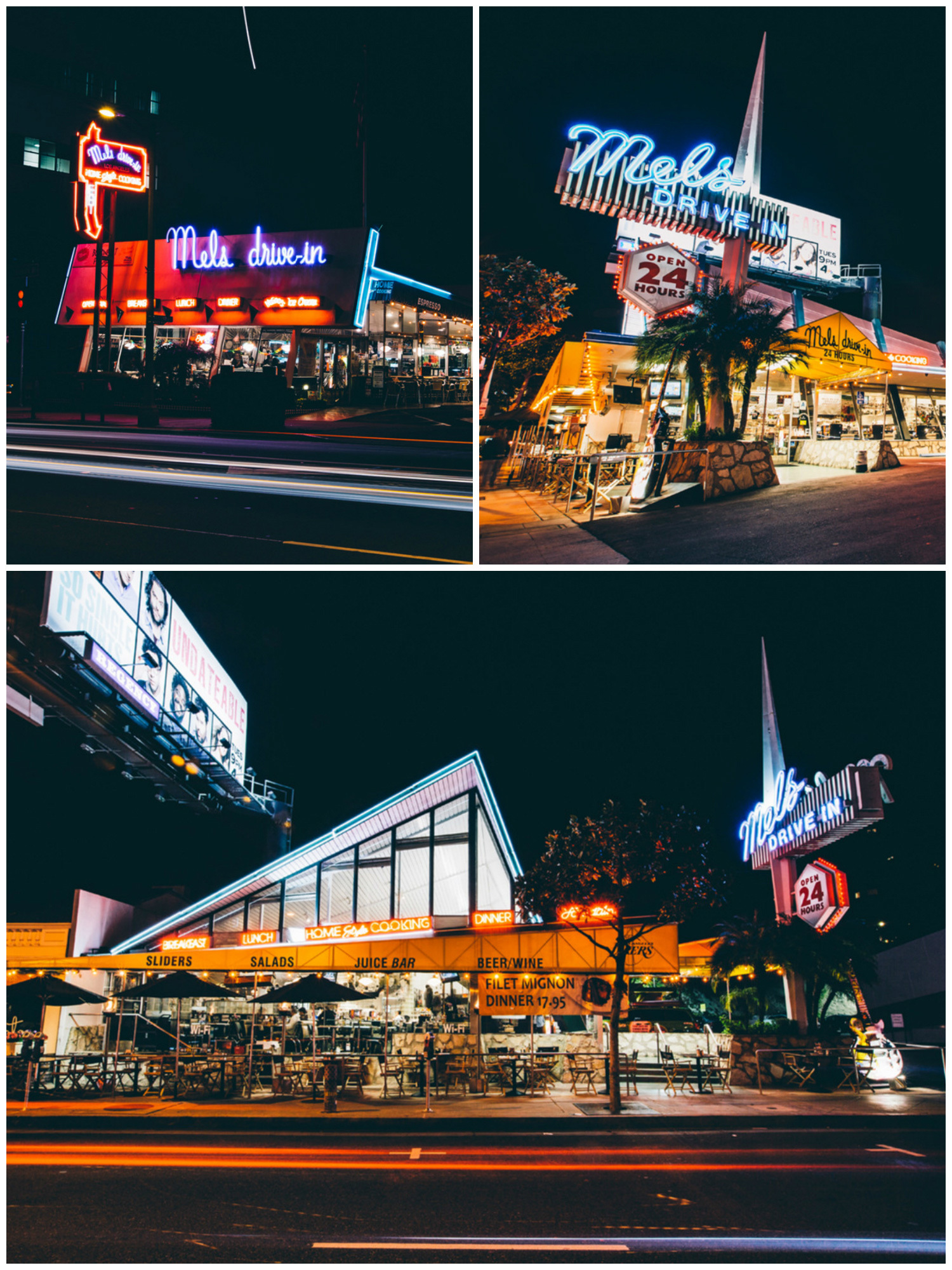 This bright West Hollywood icon once housed the rock 'n' roll coffee shop hangout Ben Frank's. These days, you're more likely to find hungry late-night tourists scarfing down burgers and trying to spot celebrities, but that makes this 24/7 diner no less enjoyable. Unlike the Sunset Strip's off-center A-frame, the Sherman Oaks location features a single swooping roof and stands out as one of the earliest examples of Googie, and one of the remaining few in the Valley. 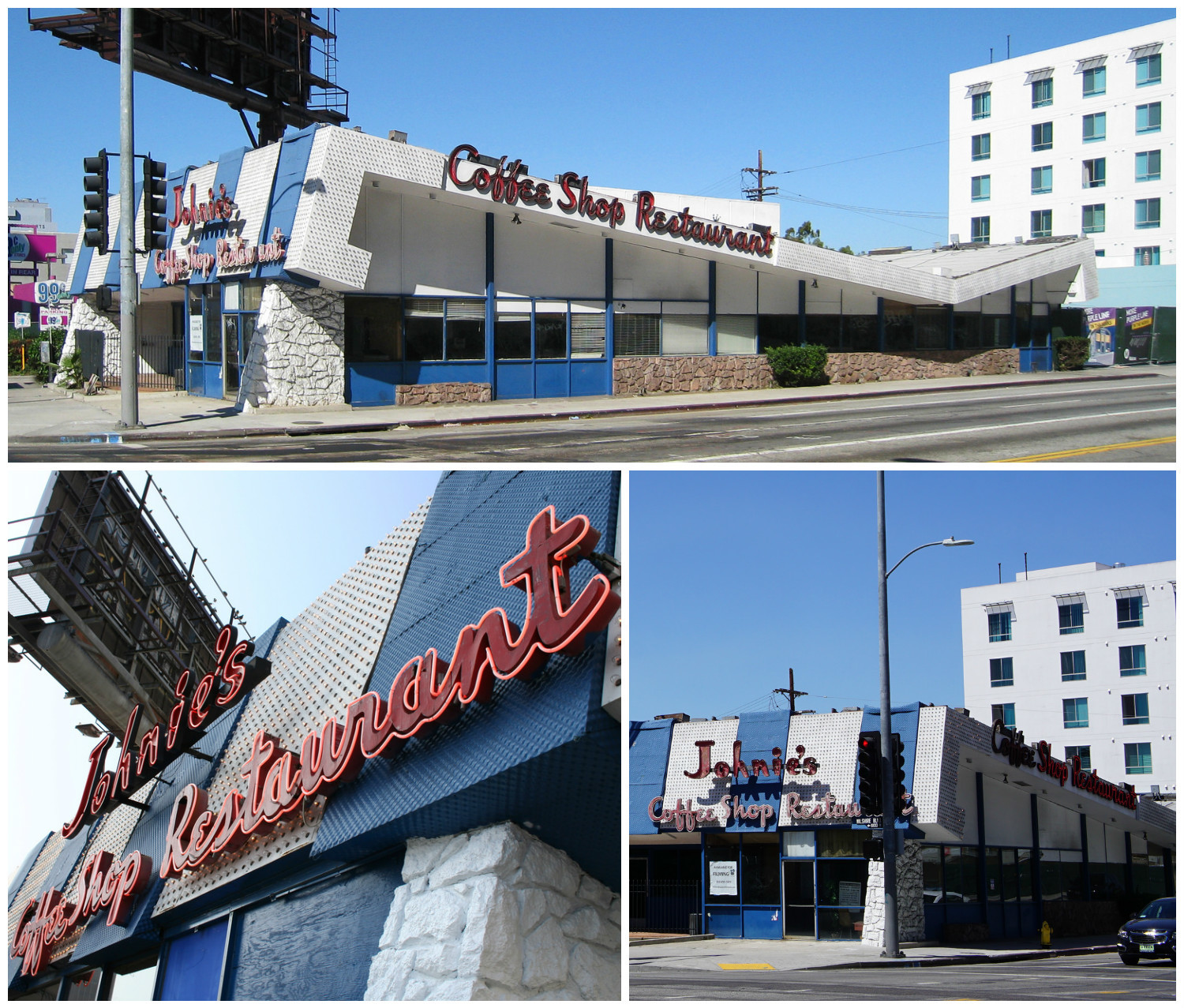 Don’t be deceived by the flashing lights along the roof of this Space Age building because Johnie’s has been closed for more a decade. As enticing as the blinking facade looks, the abandoned coffee shop is more likely to serve pickup shots than pick-me-ups these days as it's been dedicated almost entirely to film shoots. Even without a steady tenant, the holdout from the mid-'50s building boom on Wilshire isn't going anywhere; its seminal Googie design has landed it LA's list of historical landmarks. 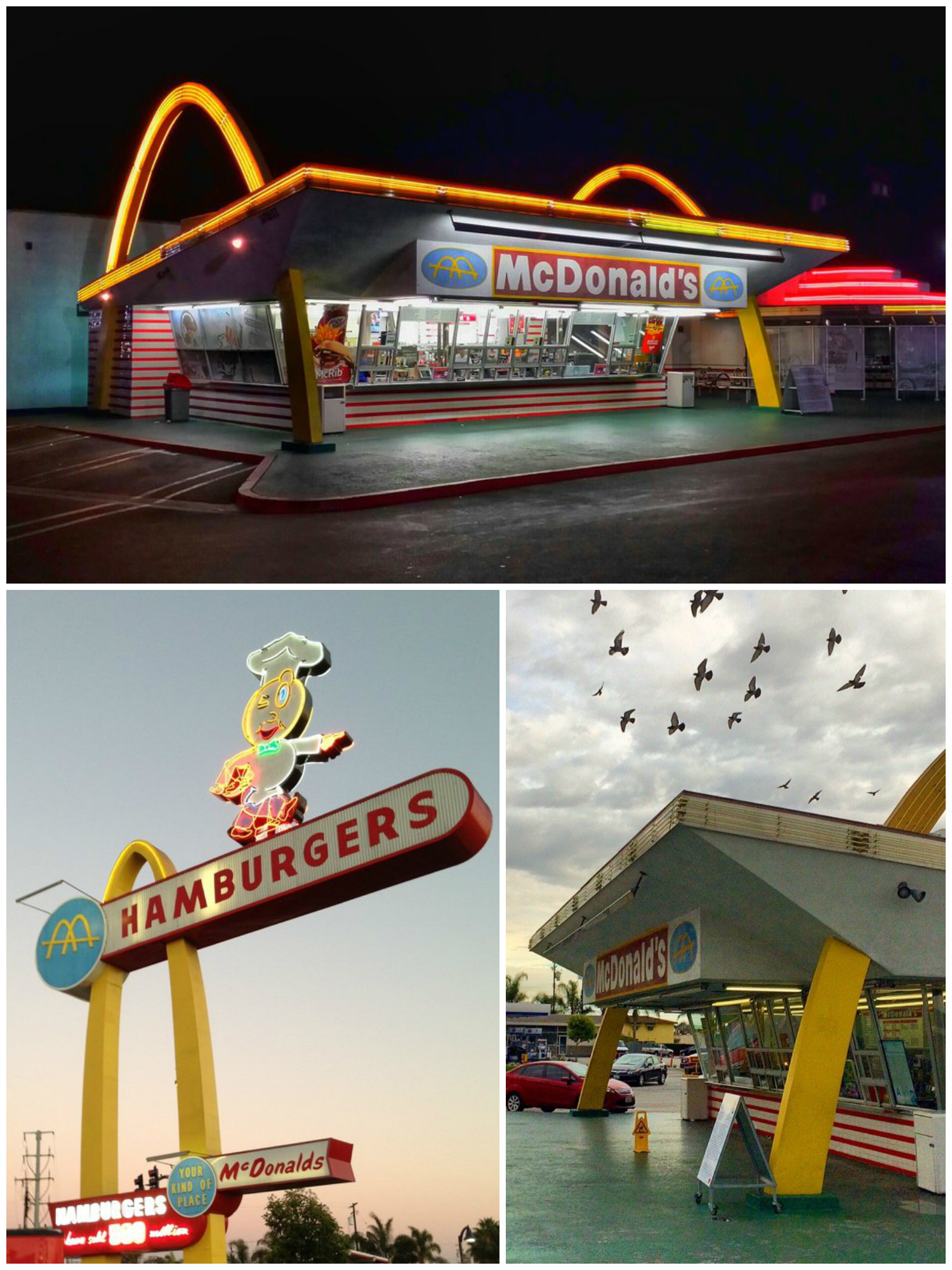 Though McDonald's has since become a multi-billion dollar (and burger) company, this Downey drive-in, the fast food chain's oldest surviving location, stands as a reminder of bygone days. The golden arch-pierced, wedge-shaped roof was devised as a standard for franchisees to follow. Most other similarly styled McDonald's were demolished to meet the corporation's modern design standards, but this Googie relic remains as it was one of the few franchised by the McDonald brothers themselves. 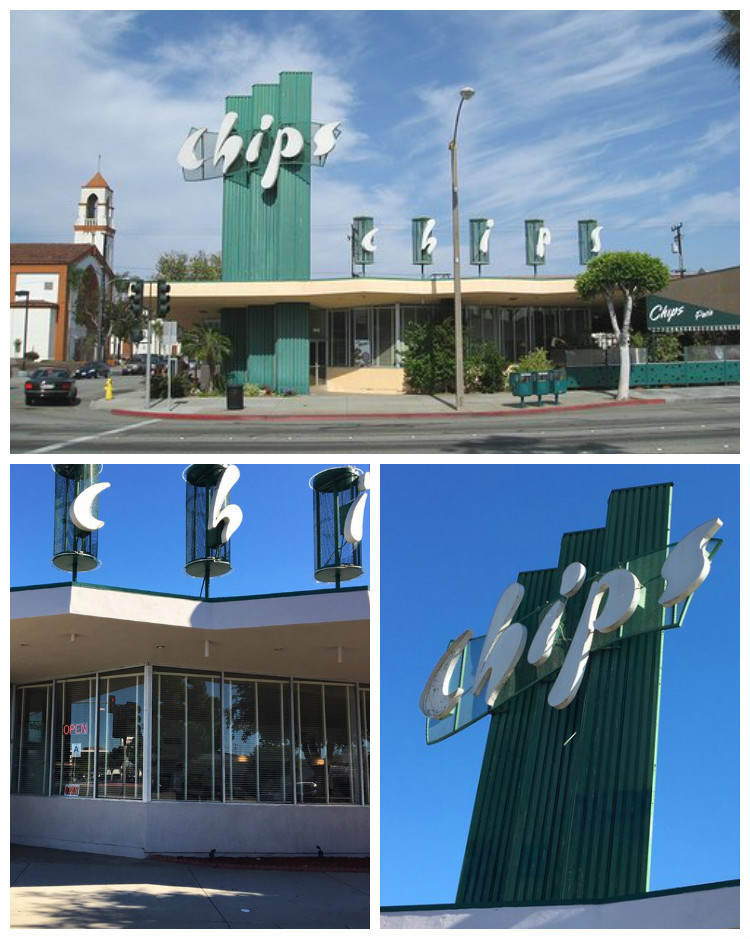 The first thing you'll notice about this midcentury diner is its towering sign—three green metal monoliths draw your attention upward to the "Chips" script. You can spot the Googie diner from a block away because of it, but come closer and you'll notice its sloped, zigzagging roof. Inside, faux wood finishes accompany cushy booths. 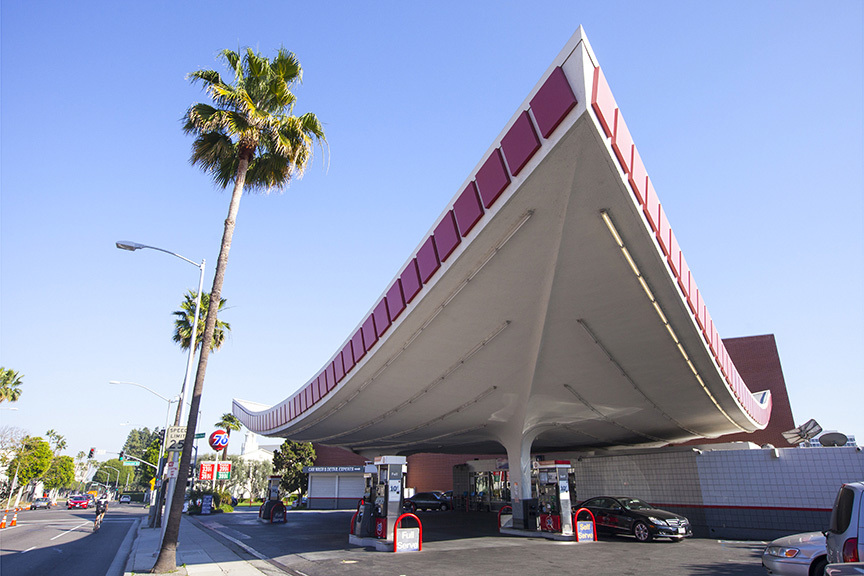 Queue up some Dean Martin as you roll into this pump, and you’ll surely think you’ve stepped back into LA’s jetsetting midcentury heyday. Who knew gas stations could feel so nostalgic? Even if you’re not filling up, the 1965 station is a worthwhile field trip, particularly at night when its elegant, peeled back roofline is aglow. Originally intended to be built near LAX, this swooping, spaceship-like design comes from Gin Wong, the same architect behind the airport’s Theme Building.