Spring is almost here, which means Southern California wildflowers are about to make their appearance—well, at least usually they do.

Whether you’re looking to go on one of the best hikes in L.A. to catch the colorful blooms or even take a day trip to see the desert flora, there are many options when it comes to trying to see Southern California wildflowers. So during those years when there’s been a bit of winter rain in Los Angeles, take advantage of it and head to one of our favorite spots below.

All that said, don’t expect any superblooms in 2021, or really any blooms of notable size. At all of the spots in our list, precipitation has been inches below average, and well off the mark of what’s needed for beautiful blossoms, let alone a superbloom. So don’t expect the widespread poppy-fueled hysteria of 2019 to return to the wider region this year. If you do end up heading out to any of these areas, make sure to wear a face covering and, for the more far-fling spots, brush up on the latest travel recommendations.

We’ve checked in on some of our favorite spots to see SoCal wildflowers and their current bloom status (in short: there’s not much to see right now). We’ll update each location as soon as there’s some bloom activity (or not).

Where to see Southern California wildflowers 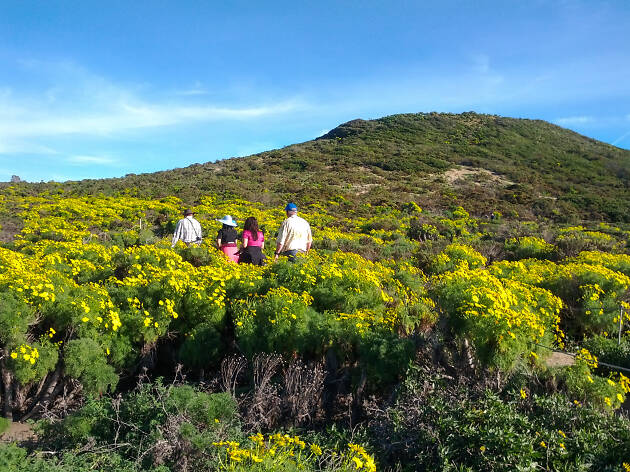 Take a hike along the top of the iconic Malibu cliff and you’ll find bundles of giant coreopsis that turn from dusty green to lively yellow each winter and spring (as of early April, this was the best spot to see flowers, but it appears to be on its way out now). You’ll find a limited number of parking spots on Cliffside Drive, between Birdview Avenue and Dume Drive, but the flowery bluff also makes a lovely hike from the sandy beach below. 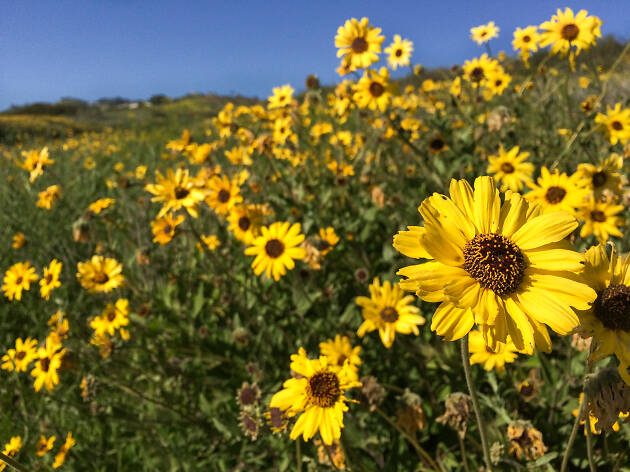 On the Palos Verdes Peninsula, wildflowers bloom year-round thanks to its coastal location, but like most Southern California locations, March and April are peak months. In the summer, you’ll see buckwheats with soft white blooms, cactus, native milkweed, cliff aster and California aster. Head to any number of the area’s nature preserves—the Palos Verdes Nature Preserve, Linden H. Chandler Preserve, George F. Canyon and White Point Nature Preserve—in the springtime to try to catch blooms. For those years when wildflowers disappoint, consider the manicured displays at South Coast Botanic Garden as an area alternative. 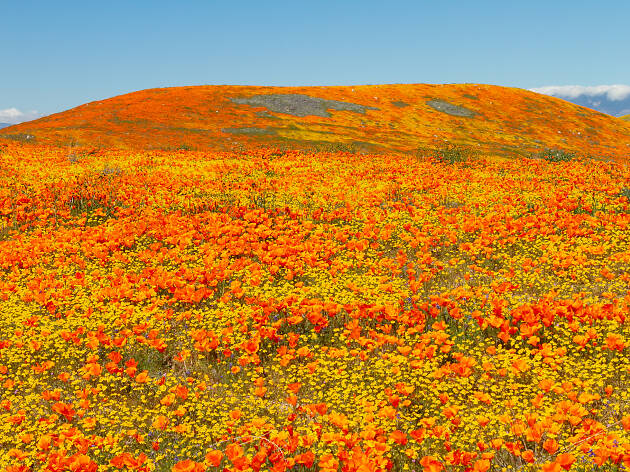 Poppies are beautiful when they cover the desert hillsides in orange flowers. But poppies are also fickle—and this year isn’t shaping up to be a good one for them. If there’s too much rain, the Antelope Valley California Poppy Reserve can only expect a moderate poppy season. Too dry? Not a great bloom either (but you could still see some other wildflowers). Peak poppy season is late March to mid April—a short window if you want to catch the blooms at their height. Check the park’s website for the latest bloom status (or tune in to the livestream, which right now basically looks like a brownish field), as well as our full guide to the Antelope Valley California Poppy Reserve. 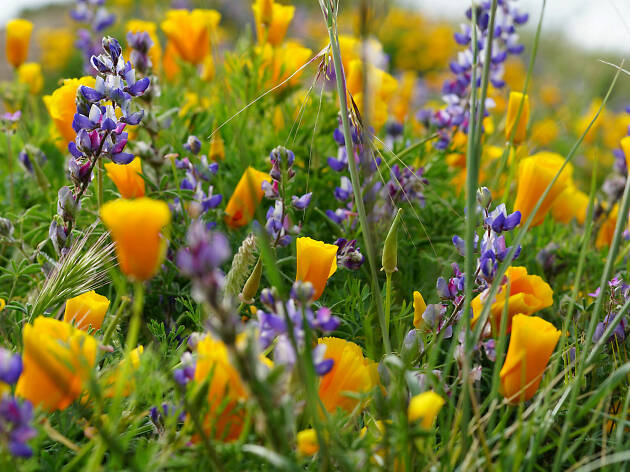 There are about 900 native plants that grow throughout the Santa Monica Mountains, so you’re bound to find small patches of wildflowers on any trail in the area. However, if you’re looking for the best chance of a spectacular sight—which seems unlikely this year—head to Point Mugu State Park and Rancho Sierra Vista, both of which flank the western end of the range. Try taking the Chumash Trail; it starts at PCH and is a steep climb, where chocolate lily and globe gilia are known to grow along the ridgeline. Or start on the north side, at Rancho Sierra Vista near Thousand Oaks where you can walk the rolling hills in serch of wildflowers under the shadow of Boney Mountain. 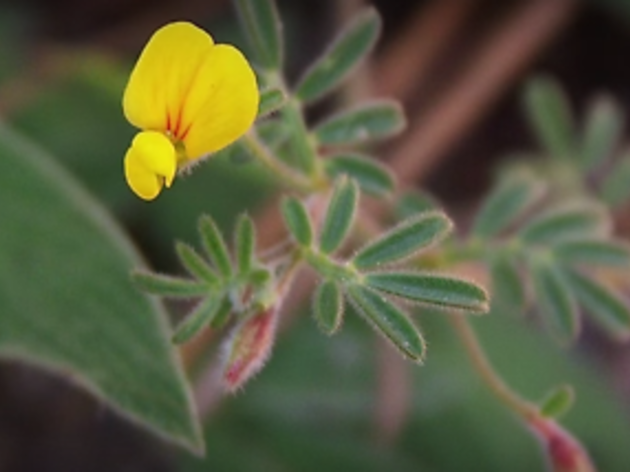 Located in the San Jacintos Mountains, wildflowers are such a big deal here they have an entire festival around them. The Idyllwild Wildflower and Art Show typically arrives just in time for the region’s peak wildflower season (which comes much later in the season due to the area’s elevation around 5,400 feet). So if you head over in late May, you’ll find a variety of species, including western azaleas, a variety of lupine, both leafy and Alpine asters and a variety of penstemon. If you travel above 6,000 feet, you’ll find even more varieties, but those tend to bloom even later in the season (say, June or even July). If you’re looking to take a hike to see the flowers, try the Summit Trail from the nature center down to the meadow in the County Park, then returning via the Perimeter trail. 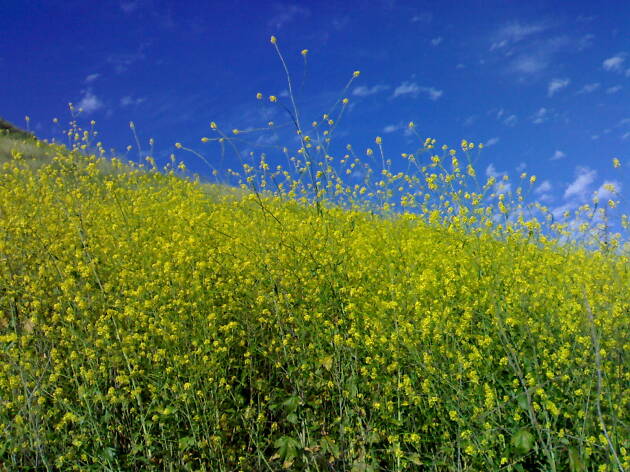 Though it’s shown some signs of recovery, Malibu Creek State Park is still a largely changed landscape in the wake of the devastating Woolsey Fire. As hikers returned to the area in December 2018, they found formerly lush hillsides turned to black. Winter rains bring patches of green to the area, but even the previous two winters never quite brought a miracle superbloom to the region—which doesn’t exactly bode well for this very dry year. 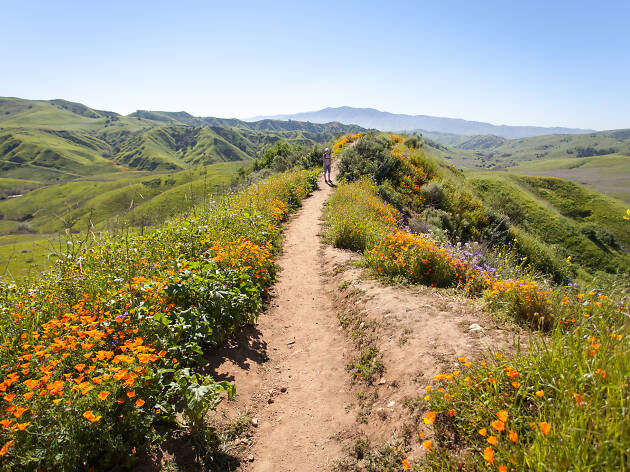 Chino Hills may not achieve full-blown superbloom status, but the state park pretty much looks like the Shire after a wet winter—which, unfortunately, looks pretty unlikely this year. But in those years when we do have rainfall, small patches of poppies line some of the dirt trails over rolling green hills, with ribbons of yellow flowers lining ridges and snow-capped mountains visible in the distance. Follow the lone park road, and just before it turns toward its terminus, you’ll find a dirt parking lot where Bane Canyon Road turns into Telegraph Canyon Road. Follow the signs for the Bane Ridge Trail and you’ll encounter poppies within 10 minutes. Just a heads up: You’ll need to stuff $5 in an envelope to enter the park—which can cause quite a backup at the gates. You can alternatively park for free in the residential area near the entrance, but you’ll be tacking two to three hilly, shadeless miles onto your trek. 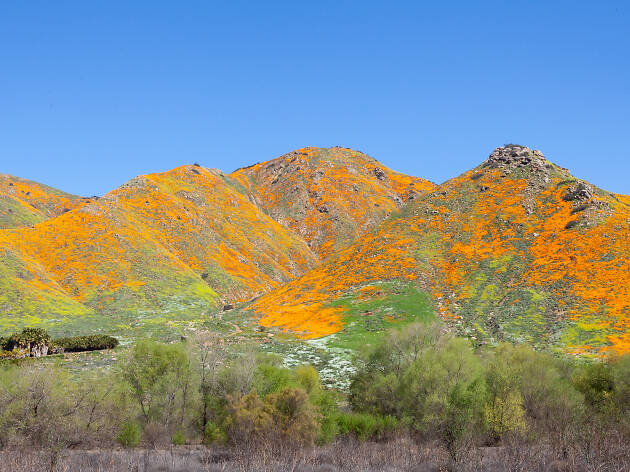 Marked by traffic nightmares, brief closures and the crush of thousands of visitors, Walker Canyon in Lake Elsinore was a superbloom sensation in 2019. The hillside trail was covered with eye-poppingly beautiful carpets of flowers—with Disneyland-sized lines of people snaking their way through them. So far, though, there’s no sign of a repeat this year. If you’re simply looking for a floral backdrop in that general direction, consider a trip to the Flower Fields in Carlsbad. 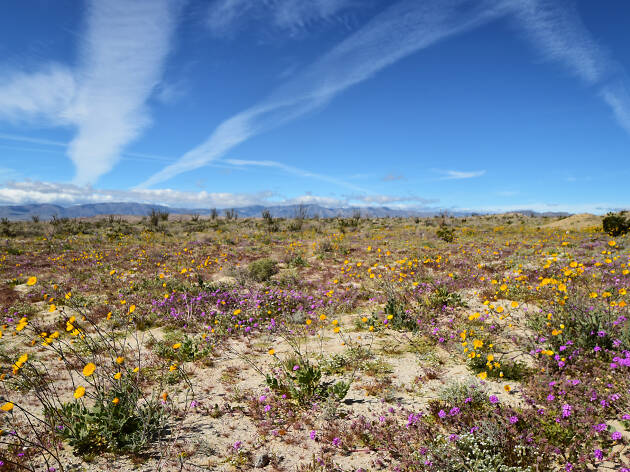 A particularly wet winter in 2016–2017 brought a superbloom to the Anza-Borrego Desert. But if you’ve been following along this far, you already know what we’re about to say: Don’t expect any extensive wildflower blooms this year (though the park notes that there’s always something in bloom if you look hard enough). For those years where there is a notable bloom, expect to see desert gold poppies, phacelia and a variety of tiny “belly flowers.” As for where to see them, each canyon—Borrego Palm Canyon, Henderson Canyon Road and Coyote Canyon—offers different varieties (check the website for variety and trail information). 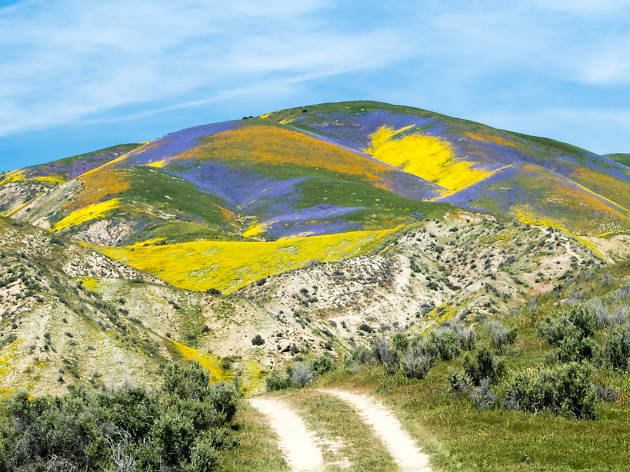 This sprawling grassland in southeastern San Luis Obispo County may stretch past what we’d typically consider Southern California, but the three-hour trip is well worth it after a wet winter—but that doesn’t look to be the case in 2021. Make no mistake: On most days you’ll find an arid, dry lake bed at the center of this national monument. But if the conditions are just right—as they memorably were in 2017—you may spot a couple of weeks where the hillsides turn into rolling carpets of daisies, goldfields and other yellow, orange and purple flora. 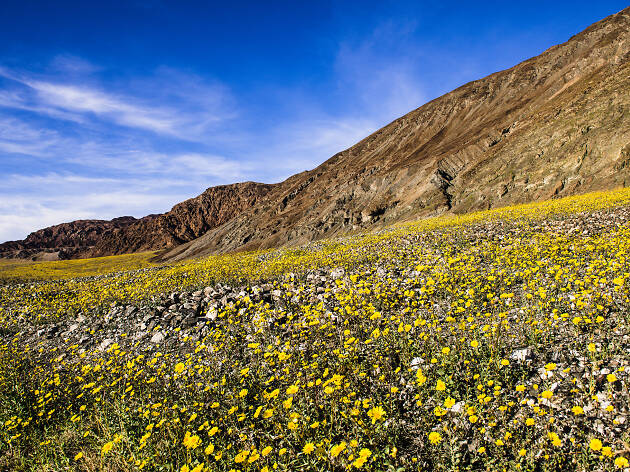 After a wet winter, you may find this iconic desert environment spotted with globemallow, desert sunflower, desert sand-verbena, brown-eyed primrose and more. If you don’t want to take the five-hour or so trek out there unknowing of what you may see, we suggest checking out the wildflower report online to be sure it’s worth your time, and where to go to find the best flora. (Sadly, the park isn’t expecting any large blooms this year.)

Don’t feel like leaving the bloom status up to chance? 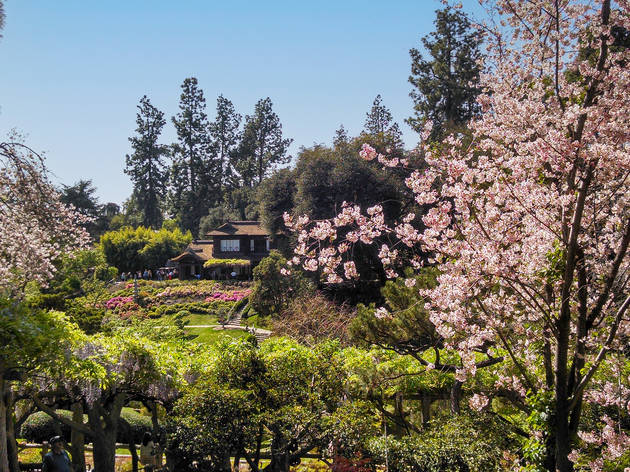 There’s always something in bloom at these splendid spots.