Where to find the best Cuban sandwiches in Miami

In which we rank the Magic City's most iconic dish, from Little Havana to South Beach and a few more surprising locales.

The Cuban sandwich is the quintessential Miami dish and anyone who claims differently should be hot-pressed in a plancha. But seriously, while there might be some disagreement over who invented the Cubano (Tampa, calm down), we hold one very strong opinion on the matter: Miami’s are the best in the world.

So what qualifies a Cubano to be considered the best Cuban sandwich in Miami? Is it the crunchy bread, the sliced ham, the roasted pork? Should it call for mustard or is plain better? We’re settling the debate by taste-testing the city’s supposed greatest—from South Beach to Little Havana—and ranking our favorites below. 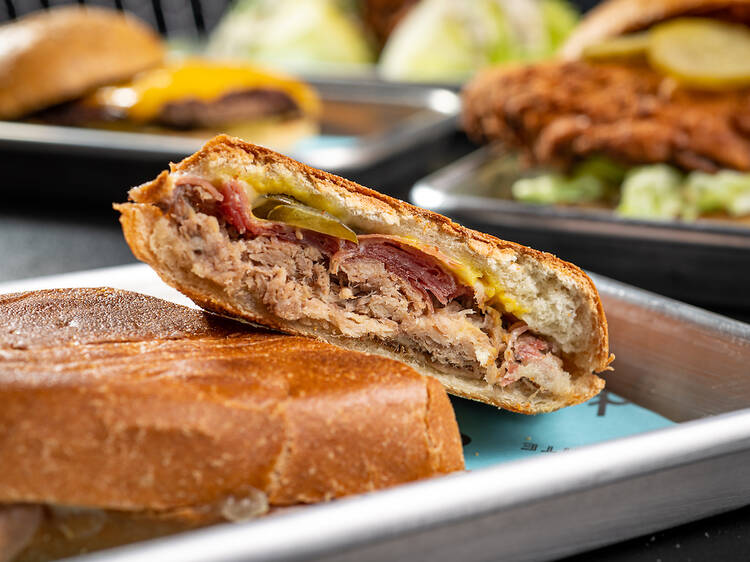 This nano-brewery specializes in burgers, fried chicken sandwiches and corn dogs that are inexplicably damn good. Maybe it’s that they’ve thought very closely about every single ingredient. That’s evident, too, in their Cuban. It all starts with a perfect representation of pressed Cuban bread: crunchy as hell outside yet still a bit chewy inside. Then there’s the Duroc pork, Benton's aged country ham, Swiss, pickles and mustard. Could you improve on any one of these layers? We’d like to see somebody try. 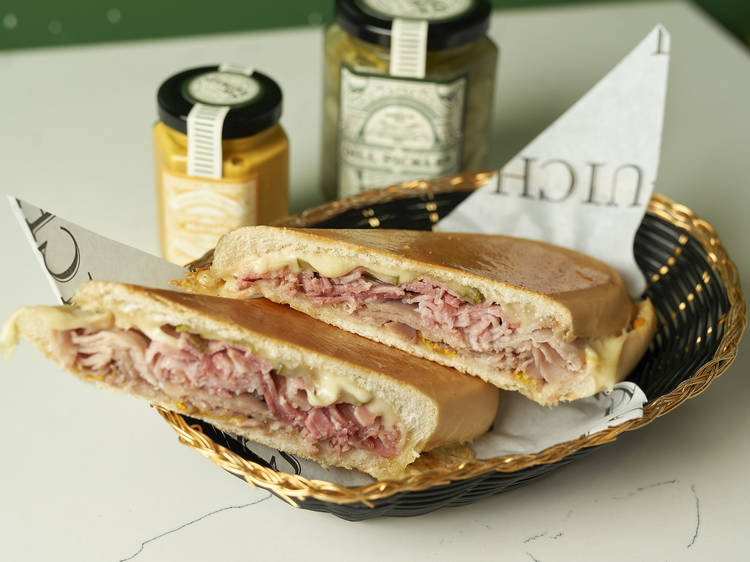 This cozy Cuban cafe in Little Havana doles out a variety of Cuban sandwiches—medianoche, pan con bistec, pan con lechón—but its Cubano is what truly put them on the map. Part of the reason why this sandwich is special is the hours of prep that go into making each ingredient before it’s even assembled: the mustard is ground in-house, the pork is cured in-house and the bread is baked precisely to Sanguich’s specifications. Once it’s all put together, the Cubano is finished off in la plancha. Recently, Sanguich joined the Goldbelly bunch so now even far-flung friends can enjoy a taste.

What’s perhaps most striking on a visit to Enriqueta’s is how this simple, old-school Miami building has withstood a condo boom that’s literally surrounded its tiny parking lot. Even as the world changed around it, Enriquetta’s remains the same, still with an always-busy takeaway window and perpetually packed dining room. People come for giant plates of Cuban classics and, of course, the Cuban, a version that’s quite cheesy and tucked with extra pickles. The Doble comes with an extra order of pork, and the Preparado stuffs two ham croquetas deep inside. 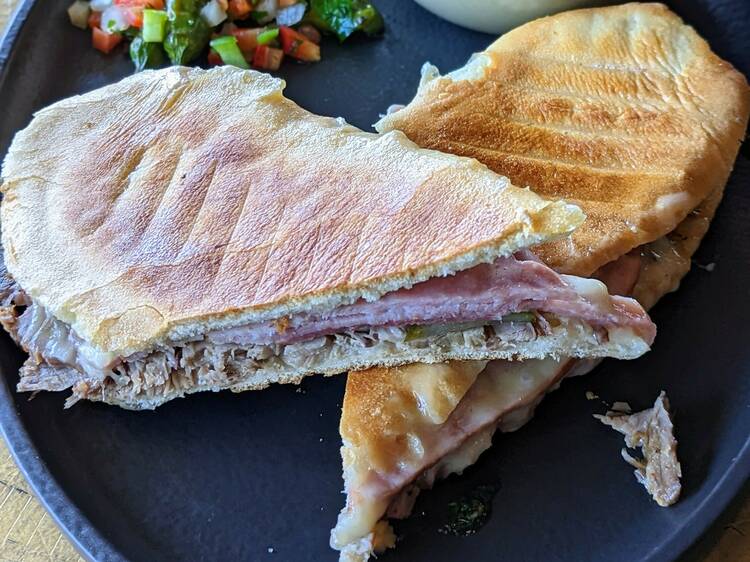 The idea behind this charming MiMo restaurant is that celebrity chef Lorena Garcia adds her flair to familiar Latin cuisine, for instance, chef-y versions of empanadas and maduros. With the Cuban sandwich, however, she wisely does not mess with near-perfection, instead putting out an excellent example of a Cuban prepared with some of the best roast pork we sampled and warm, flaky bread toasted just right. 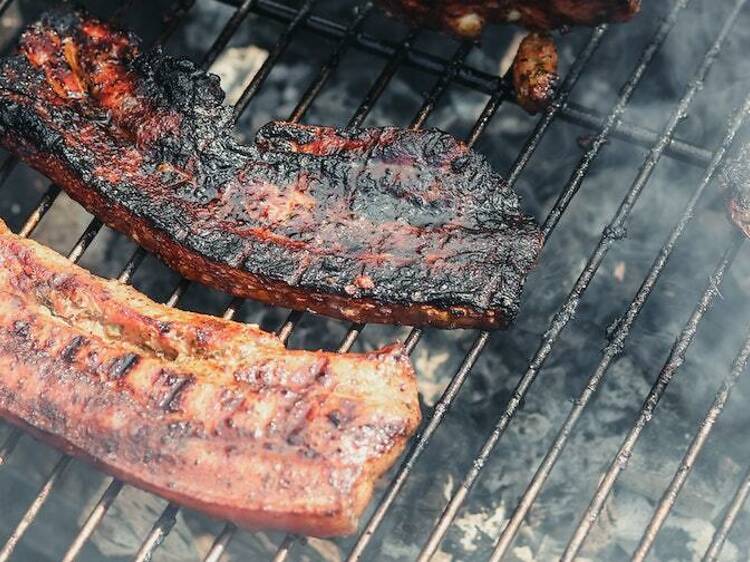 Husband and wife duo Jason and Melanie Schoendorfer began by peddling homemade bacon at the farmers’ market. When they opened a full-fledged butcher shop, they also started selling sandwiches—some of the best sandwiches in town, as a matter of fact. Theirs is something special in part thanks to the ham. Unlike the tragically bland boiled variety on many Cuban sandwiches, here it’s smoked in-house, giving the entire affair a deep, smoky awesomeness. 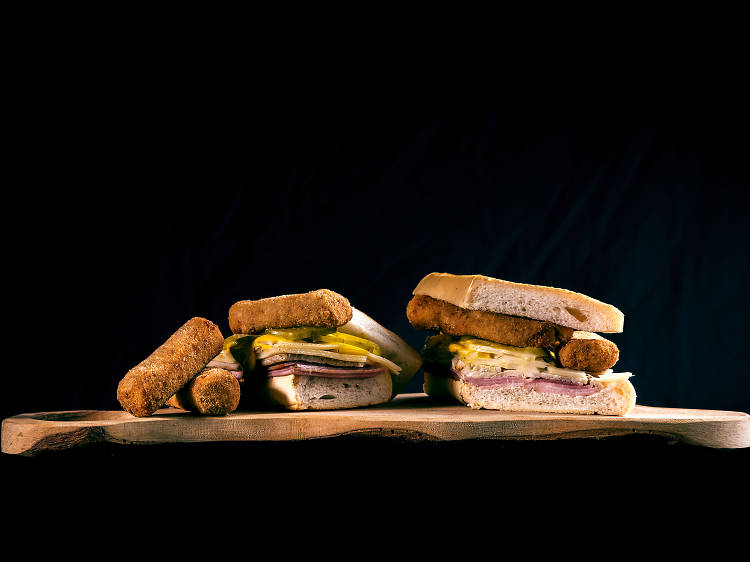 This local Cuban chain appeals to a younger generation with its low-calorie menu La Flaca menu ("the skinny girl" in English) and riffs on classic American dishes, like the cobb salad and assorted flatbreads. Its Cuban sandwich, meanwhile, is straightforward and a real-deal sando, well-pressed with good portions of all the key ingredients. While the Cuban stays true to its Miami-ish roots, Sergio’s also gives the plancha treatment to some fine alternatives, like a pan con lechón with grilled pork, onions, mojo sauce and Cuban bread.

This local staple of Cuban cuisine opened in the heart of Little Havana in 1976 and now has multiple outposts in Miami (including inside Miami International Airport). It offers an expert Cubano that, while heavy on the ham, nails the perfectly toasted bread every single time. 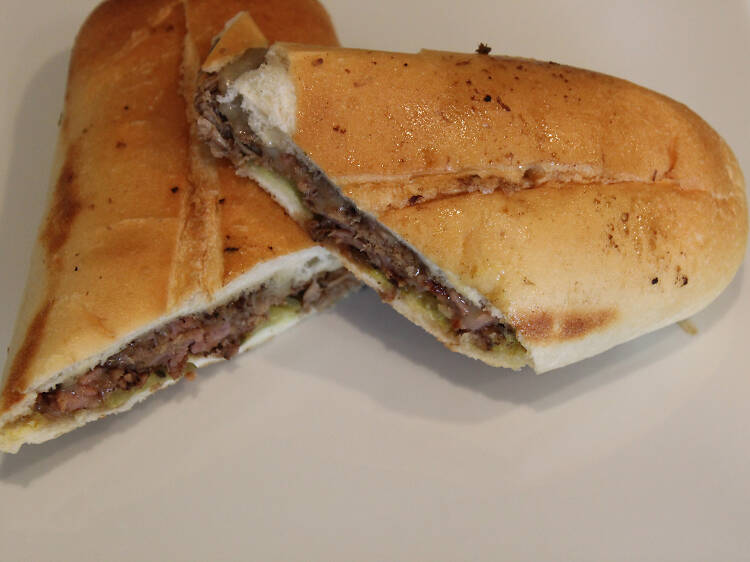 No restaurant, and perhaps no person shy of Pitbull, has so strongly repped the 305. And so it makes sense that you’ll find a Cubano at Kush that’s constructed ingredient-by-ingredient to represent Miami’s quintessential dish. Here, it’s highlighted by the meat, smoked ham and slow-roasted-in-house pork that comes, as a bit of a surprise, on bread that’s more hoagie roll than traditional Cuban. Plantain chips and cilantro aioli on the side come as a bonus. 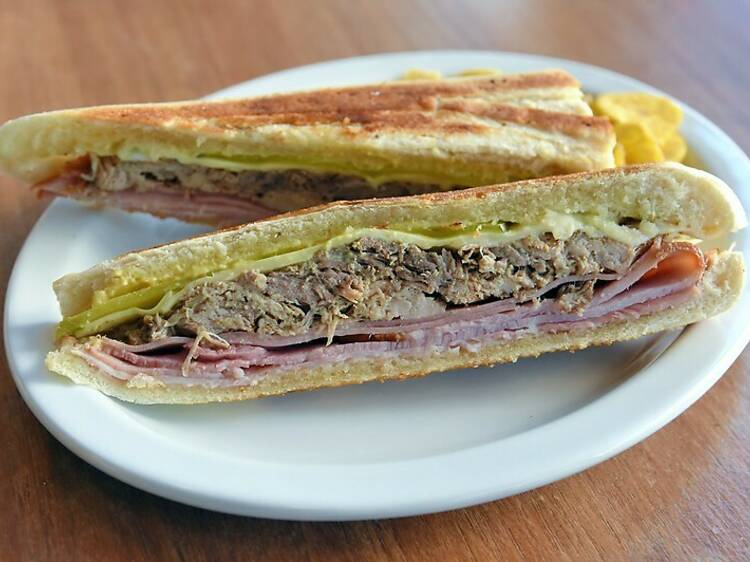 Perhaps this little cafe, now with locations in Coral Gables and Miami Shores, would rank higher here if its menu listed an actual Cuban sandwich. Perhaps you’ll think they should be disqualified, but Tinta y Café does an incredible sandwich that’s mighty close, and so good it definitely deserves a spot. All that stands in the way of the Patria being a traditional Cuban is the addition of mortadella and a garlicky sauce, two additions you’ll be glad are there. 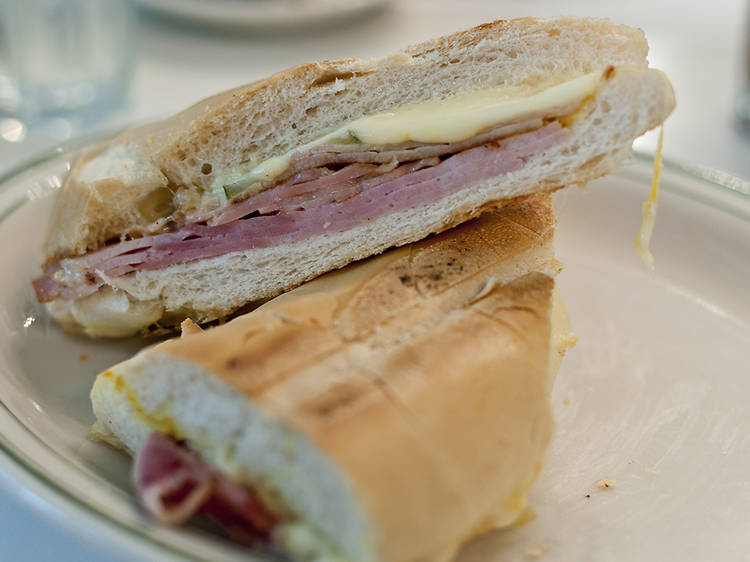 It’s dubbed itself the world’s most famous Cuban restaurant, and the Cubano might be the most popular thing on the menu. The original (there’s a special version that’s slightly larger) meets all the basic requirements: toasted and filled with the correct ingredients. Presidents and celebrities have sat on the Versailles stools, which explains why these days you’ll often be standing in line to get yourself a fine Cuban.

When it comes to Cuban sandwiches, this restaurant likes to bend the rules. Mustard is replaced with Sarussi's signature secret sauce—a liquidy version of sofrito with hints of cumin that packs a flavorful punch. The bread tastes more Italian than Cuban, and can be ordered with melted butter brushed on top. Purists be warned: You won’t find a traditional Cubano here, but you’re still getting a stellar sandwich. 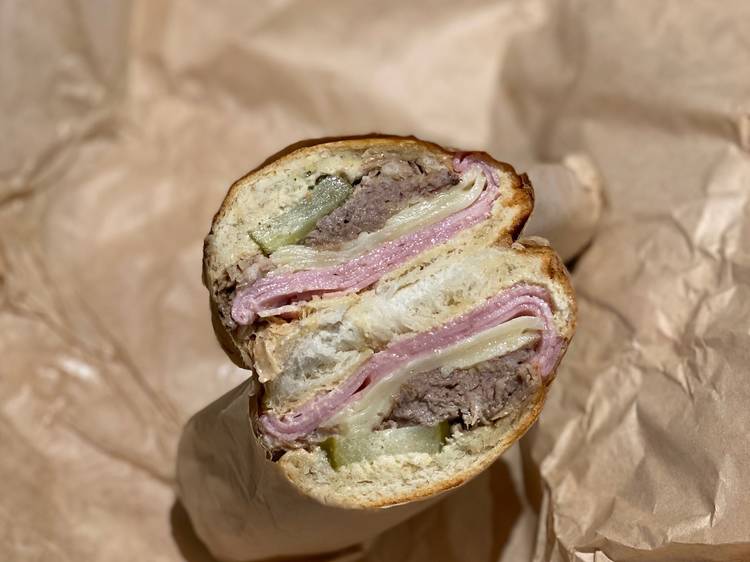 Cuban sandwiches are inherently fast food but a fast-food version of the sando didn’t genuinely exist until Pollo Tropical’s hit the market. And before you go doubting the Florida chicken chain’s place in an already crowded space, hear us out. There’s a lot to be said about its affordability ($8.19 for a Cuban), accessibility (hello, drive-thru!) and consistency. Beyond being a pragmatic option, Pollo Tropical’s sandwiches are tasty. The bread is a cross between a medianoche bread (soft and eggy) and a flattened Cuban loaf, so there’s more attention on the filling. It’s available as a standard Cuban sandwich or with fried or grilled chicken instead of roasted pork. 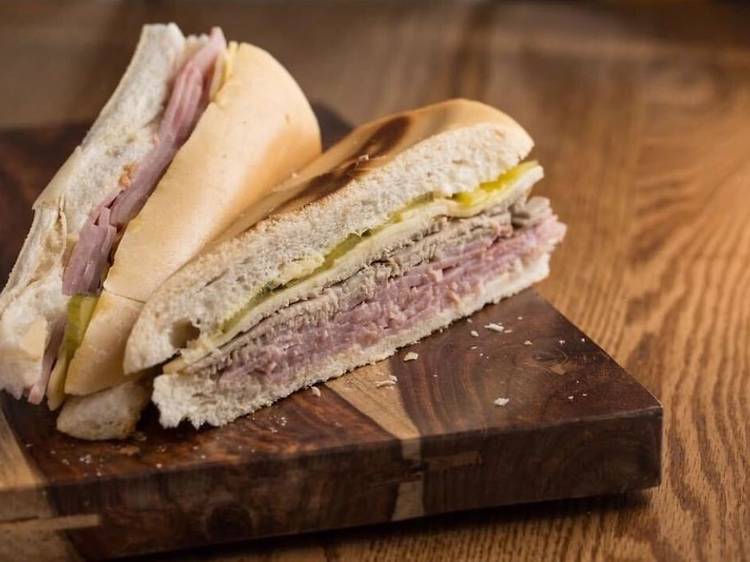 Cafe might be a misnomer for this Cuban restaurant, with locations in Brickell, Hialeah and near the airport. All three of them are big spots with equally extensive menus. The standard Cuban here comes with a generous stack of ham, roast pork and Swiss that’s almost too big to all get in one bite. At under $10, it’s a bargain for a hearty sandwich that easily feeds two hungry people. 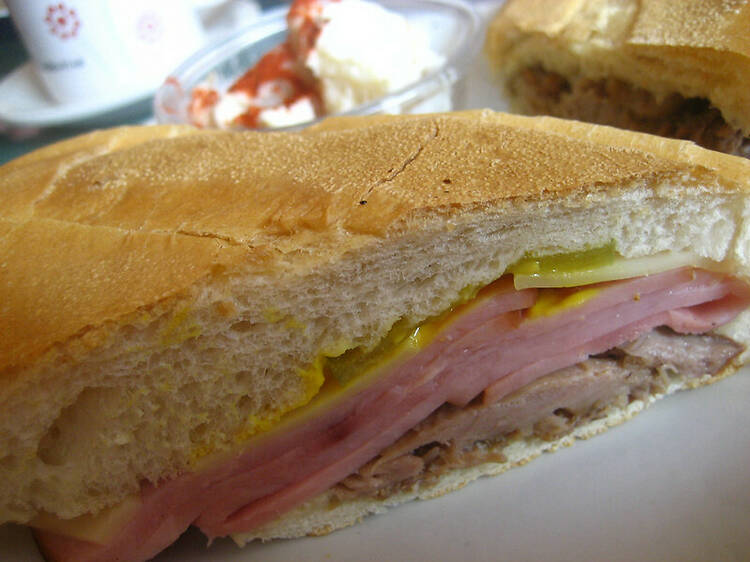 Caribe is part of a small Miami-based chain of Cuban restaurants where the servings are massive and the prices are generally low. The Cuban sandwich is no exception. The meats are piled high, especially the roast pork, and the bread itself is sliced larger than in other restaurants. 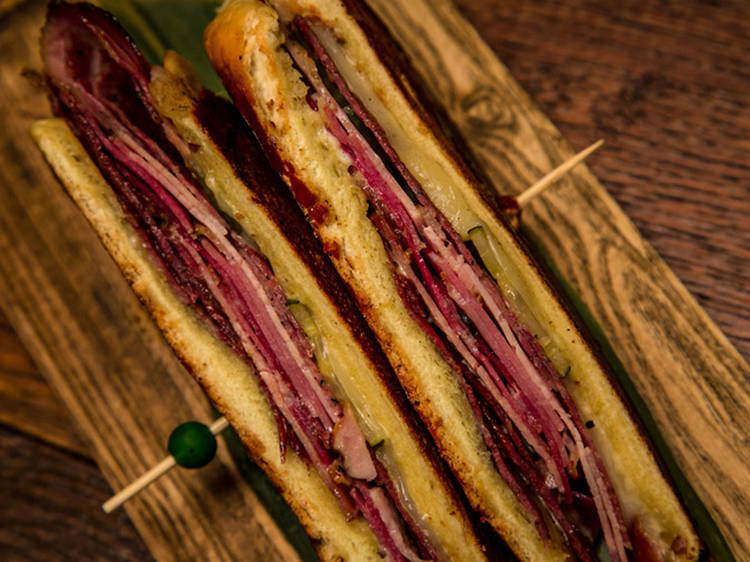 Every once in a while, a sandwich shop comes along and tries to do things differently. For Doce Provisions, apparently, it worked, since they now have locations in Little Havana and Doral. Doce offers the most divisive sandwich we sampled, replacing the Cuban bread with a soft roll and adding soppressata, more similar to the version of the sandwich served in Tampa. Differences aside, we appreciate the soft, pressed bread and enjoy the saltiness of the soppressata.

It doesn’t get more down-home than this Cuban diner in Little Havana. Service is no-frills, portions are generous, and dishes are packed with big flavors. Its location adjacent to Domino Park makes it a favorite stop for neighborhood locals and large groups of tourists exploring the area. The restaurant’s only offense? Skimping on the roasted pork in favor of more ham in their Cubano. The bread is also very crispy, which can go either way depending on your preference. 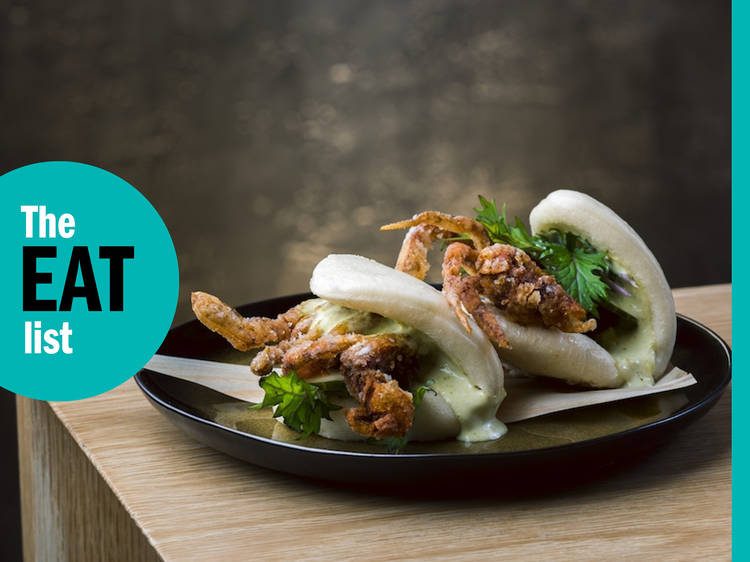 The best restaurants in Miami you have to try

Our tried, true and tested top places to eat in the city