Among NYC’s art museums, MoMA’s collection of 20th-century artworks is arguably unrivaled among other holdings, like those of The Metropolitan Museum Of Art or the Solomon R. Guggenheim Museum. MoMA, after all, has “Modern Art” right in its name, and beginning in 1929, it pioneered the acquisitions of masterpieces in Postimpressionism, Cubism, Surrealism and abstraction—not to mention Pop Art and works by leading contemporary artists. Though MoMA possesses works in all mediums, its horde of paintings takes center stage in its collection, as you can see in our list of the best paintings at the Museum of Modern Art (MoMA).

RECOMMENDED: A full guide to the Museum of Modern Art

Best paintings at the Museum of Modern Art 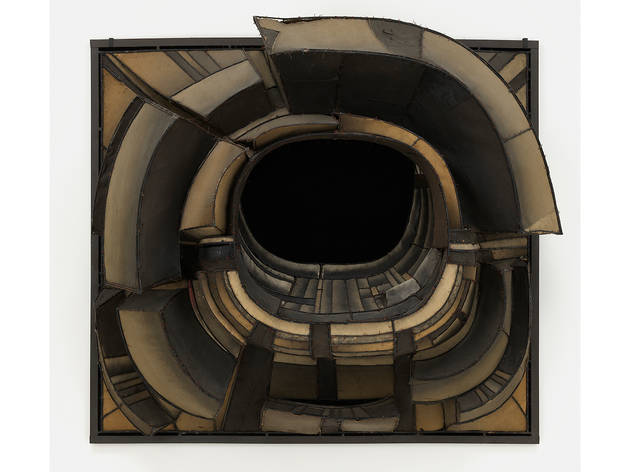 In the macho scene of postwar American art, Bontecou was a rare female presence, but when it came to making tough work, she could keep up with the boys and then some. This piece is made with industrial canvas salvaged from a conveyor belt that had been tossed out on the street by a laundry located below the artist's East Village apartment. The glowering form—suggesting a wormhole into some dimension of Cold War terror, or an eyepiece from a gas mask—was achieved by stretching fabric across a steel frame. 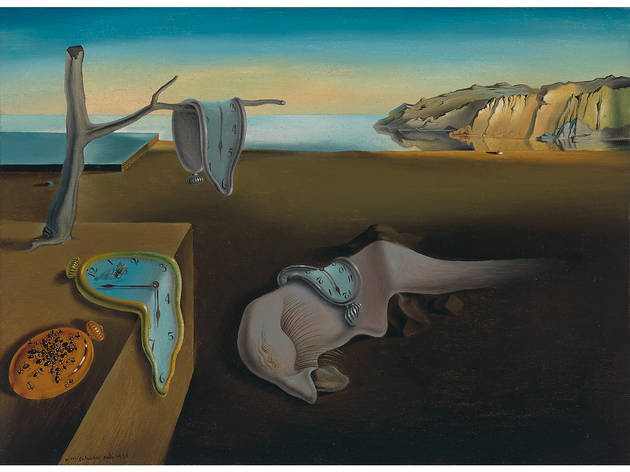 Dalì described his meticulously rendered works as "hand-painted dream photographs," and certainly, the melted watches that make their appearance in this Surrealist masterpiece have become familiar symbols of that moment when reverie seems to uncannily invade the everyday. The coast of the artist's native Catalonia serves as the backdrop for this landscape of time, in which infinity and decay are held in equipoise. As for the odd rubbery creature in the center of the composition, it is the artist himself, or rather his profile, stretched and flattened like Silly Putty. 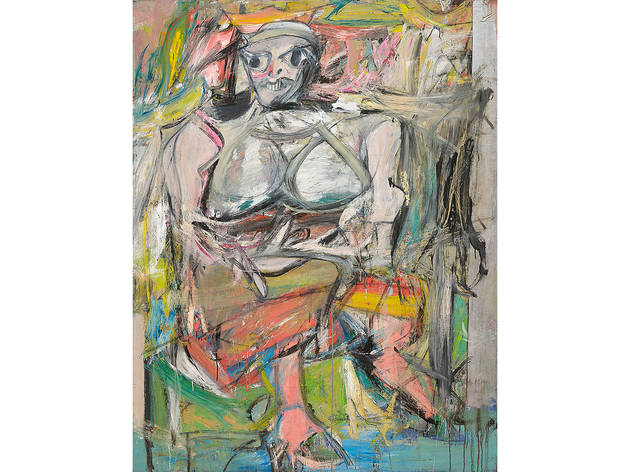 In the signature painting of De Kooning's career, the artist jokingly inserts an interplay between enormous eyes and breasts (strapped down here as if they might burst from the picture plane and smother the viewer), taunting us with the question, which would you look at first? The flurry of violent marks defining the figure could be easily read as misogynistic, but complaining about misogyny in New York's postwar art world is a bit like complaining that Rembrandt didn't have electric lights. With her verticality and frontal positioning, /Woman I/ seems enthroned: the regent of De Kooning's imagination. 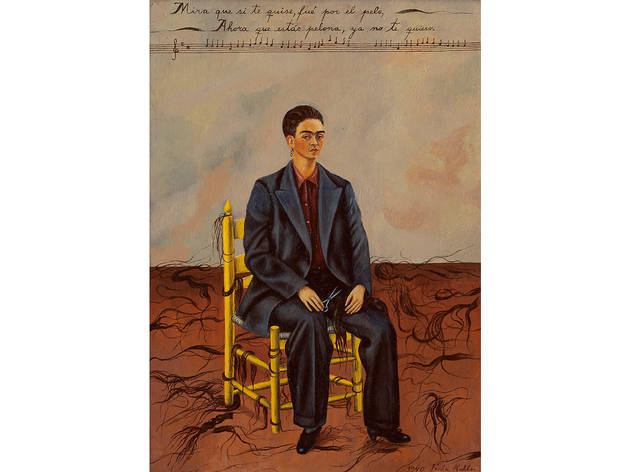 This gender-bending self-portrait by the celebrated Mexican artist and feminist icon was occasioned by her divorce from Diego Rivera—the muralist notable not only for his own artistic genius, but for his philandering ways. Kahlo had apparently enough of the latter, but as the painting indicates, she couldn't quite quit Rivera. She pictures herself in a chair, hair shorn, with her signature peasant blouse and skirt replaced by Rivera's clothes—effectively transforming herself into her ex-husband's likeness. Her locks, now scattered across the floor, seem to writhe menacingly around her, and she captioned the composition with the words from a popular Mexican love song: "Look, if I loved you it was because of your hair. Now that you are without hair, I don't love you anymore." Unsurprisingly, Kahlo remarried Rivera the following year, so this weirdly compelling painting could also be described as a monument to codependency. 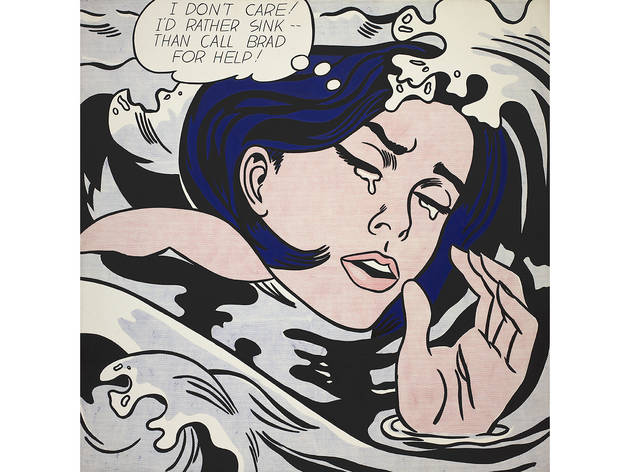 Lichtenstein's Pop icon is at once a coolly ironic deconstruction of pulp melodrama and a formally dynamic—even moving—composition, thanks largely to the interplay of the subject's hair (swept into a perfect Mad Men–era coif) and the waves (which seem to have wandered in from a Hokusai print) threatening her. The image, a crop from a panel in an early-’60s comic book titled Run for Love!, shows that Lichtenstein's in full command of his style, employing not only by his well-known Ben-Day dots, but also bold black lines corralling areas of deep blue. It's a complete stunner. 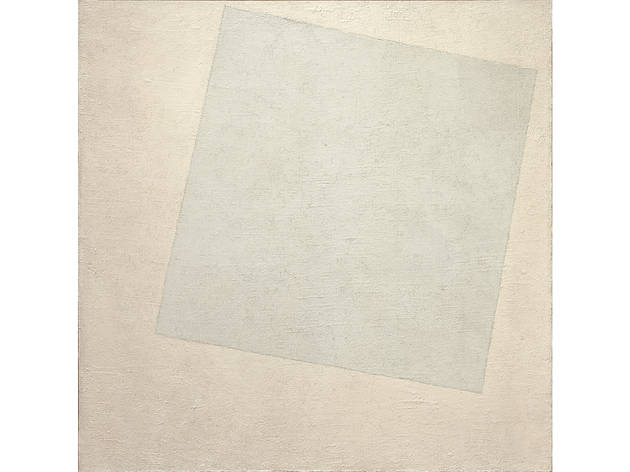 Though it was painted nearly a century ago, this painting's radical nature continues to astonish. Malevich's aim wasn't pure reductivism, though. Inspired by Russia's icon tradition, the early Soviet avant-gardist believed that the Russian Revolution had ushered in a new age in which materialism would give way to spirituality. He called his philosophy Suprematism, and /White on White/ serves as the supreme manifestation of the artist reaching for transcendence. 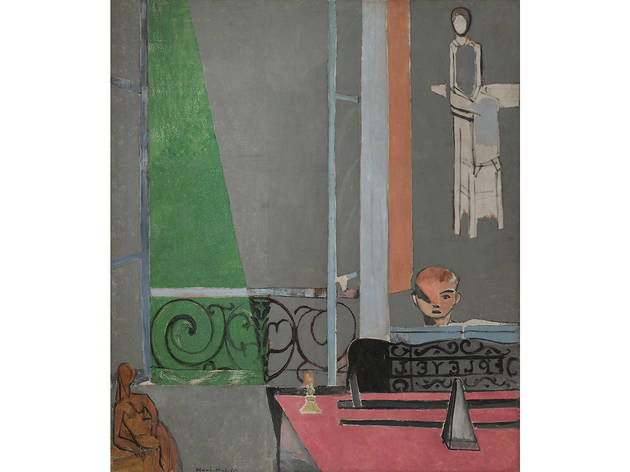 One of the artist's most personal pieces, The Piano Lesson shows Matisse's son Pierre at the keyboard. It's a composition about space, but also about time, as it echoes again and again the pyramidal shape of the metronome on the piano—in the band of green slicing across a casement to the left, and in the shadow falling across Pierre's face. He is set between two of his father's works depicting females, the matronly Woman on a High Stool and a small sculpture of a sensuous, reclining nude. More than a simple description of a family life, The Piano Lesson serves as a meditation on manhood, and one boy's impending introduction to it. 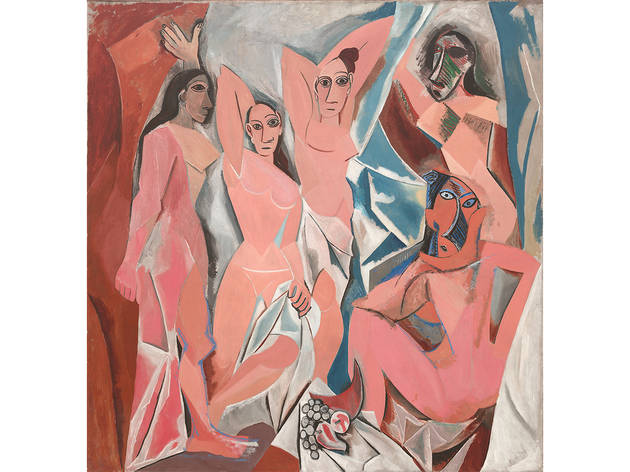 The ur-canvas of 20th-century art, Les Demoiselles d'Avignon ushered in the modern era by decisively breaking with the representational tradition of Western painting, incorporating allusions to the African masks that Picasso had seen in Paris's ethnographic museum at the Palais du Trocadro. It's compositional DNA also includes El Greco's The Vision of Saint John (1608–14), now hanging in the Metropolitan Museum of Art. The women being intruded upon by the small still-life at the bottom of frame are actually prostitutes in a brothel. An early study for the painting featured a medical student entering from the left to make his selection for the night, but Picasso wisely decided to leave him out in the final composition, leaving only Avignon in the title as a clue to his subject's origin: It's the name of a street in the artist's native Barcelona, famous for its cathouses. 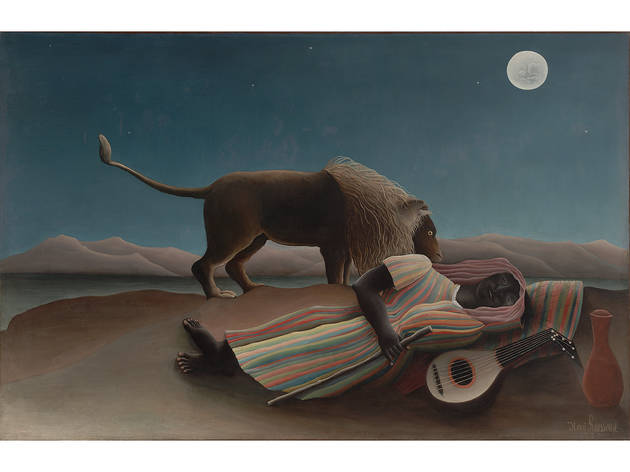 Rousseau's career represents the first instance, perhaps, of a self-taught outsider artist who won the admiration of insider peers, though the road to recognition wasn't easy. The story goes that Picasso first stumbled upon the work of this toll-collector-turned-painter while it was being sold on the sidewalk as used canvas to be painted over. Since then, Rousseau's mix of dreamy naive figuration and exotic landscapes (all imagined; he never left France) has become indelible—never more so than in this painting, in which the juxtaposition of beauty and beast has an unearthly quality. 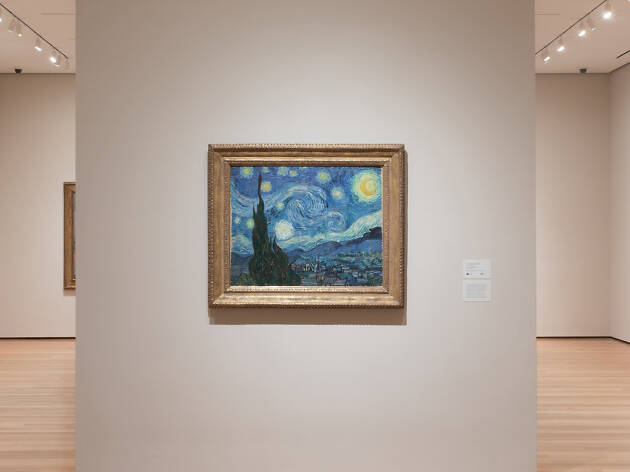 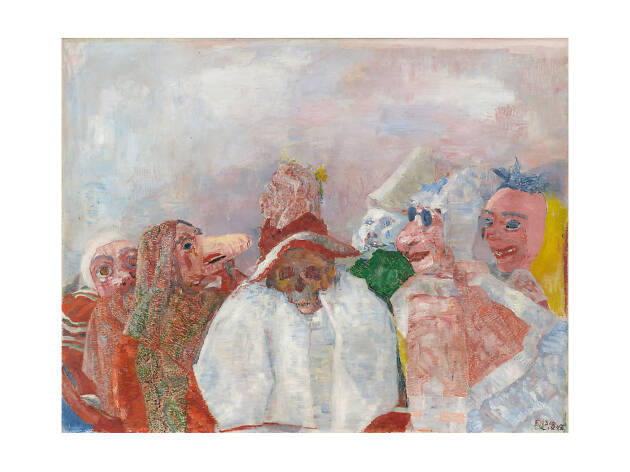 Known for paintings featuring masks and skulls, the Belgian artist James Ensor is often seen as a precursor of Surrealism, which is true up to a point. Though seemingly Surreal in the broad sense of the term, his work wasn’t concerned with dreams or the unconscious (which would later become Surrealist obsessions), but rather with the futility and irony of existence. Furthermore, his themes were rooted in direct observation, as the ghouls and goblins that populate his imagery didn’t spring from his imagination, but were based instead on props and costumes set up in his studio (a legacy of the family business, a small emporium that sold festive get-ups and souvenirs to tourists who came to Ensor’s seaside hometown of Ostend for its annual Mardi Gras–style carnival). Such a tableau is featured in this painting where the central figure, representing death, is actually a skull plopped on an arrangement of empty clothes. The same goes for the masked subjects crowding around grim reaper, who wears an elaborate lady’s hat, giving the scene an unnerving erotic undertone. 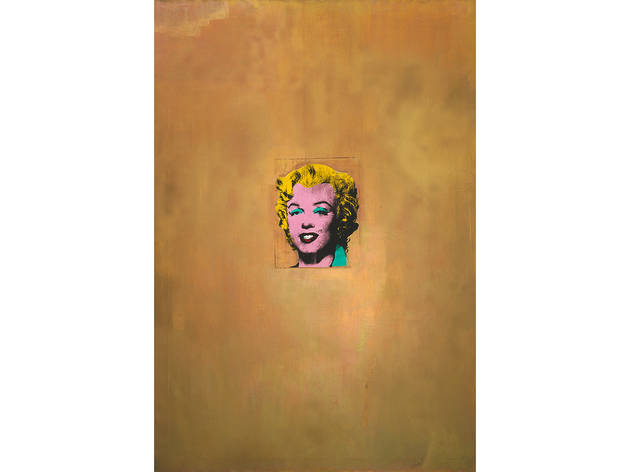 No Warhol demonstrates the artist's worship of glamour better than this painting, created the year Monroe died in an apparent suicide. It is the altarpiece in Andy's Pop Art church of celebrity. But by the same token, the work also speaks to Warhol's background as an observant Catholic; it wouldn't look all that out of place at St. Peter's Basilica in Rome or at St. Patrick's Cathedral on Fifth Avenue, where Warhol regularly attended mass (sans wig). The image is based on a publicity still for the film Niagara, in which Monroe played opposite Joseph Cotton as an unhappily married woman, plotting the murder of her husband. 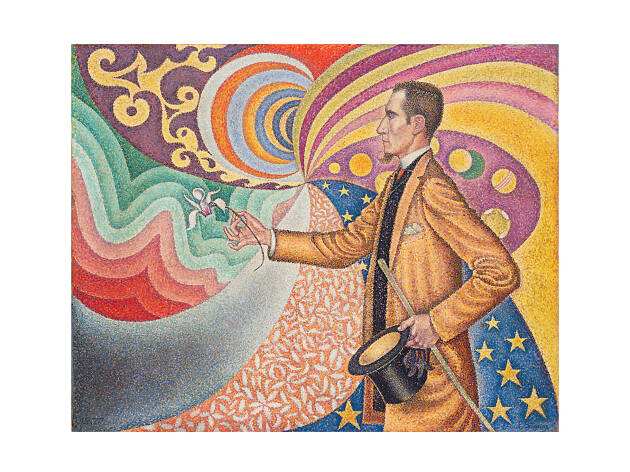 Near the end of the 19th century, Impressionism’s spontaneous mode of painting gave way to Postimpressionism and its more methodical forms of expression. It was in this context that Pointillism emerged, and while usually associated with Georges Seurat, Paul Signac was another major figure of the movement. His best-known work is this exuberant—almost psychedelic—portrait of his friend, Felix Fénéon. An art dealer and critic, Fénéon is seen posed in profile against an abstract, spiral background that symbolically sets in motion the theories of Charles Henry—a mathematician, inventor and aesthete who took a scientific view of colors, proposing that rather than being blended, different hues should be treated as pure independent elements and kept separate from one another. His ideas underpinned Pointillism’s technique of applying paint as dabs of pure color that would mix in the eye of the viewer. Signac pays homage to Henry, while the painting’s long, grandiose title seems to spoof his empirical claims for art. Fénéon, meanwhile is portrayed as a magician, who, top hat and cane in hand, brandishes a white flower from which the pinwheel backdrop seems to emerge.