Have you been to Marquee—one of the venues that defined the ongoing (but perhaps fading) models-and-bottles clubbing era—since it’s reopened as a more DJ-oriented hotspot? Sure, you could say the place is playing catch-up with the EDM craze—but the place is a trip, with a full-on sound system, flashy-flash lighting and go-go action aplenty. They’ve don a pretty good job with the DJ booking as well (it probably helps that Sleepy & Boo are part of the team), with the likes of Danny Howells and Dubfire having already passed through. Now it’s James Zabiela’s turn: The tech- and progressive-house star will be playing the club on Friday, February 22. If you can’t wait till then, here’s a short-but-very-sweet set, culled from his beloved Paradigm Shift series of mixes, straight from the head honcho of the Born Electric label himself—with a video of the Zabiela-produced “The Healing” tossed in for good measure. 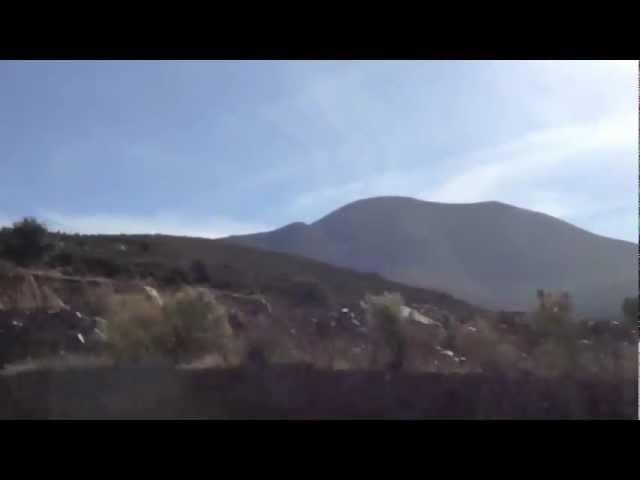 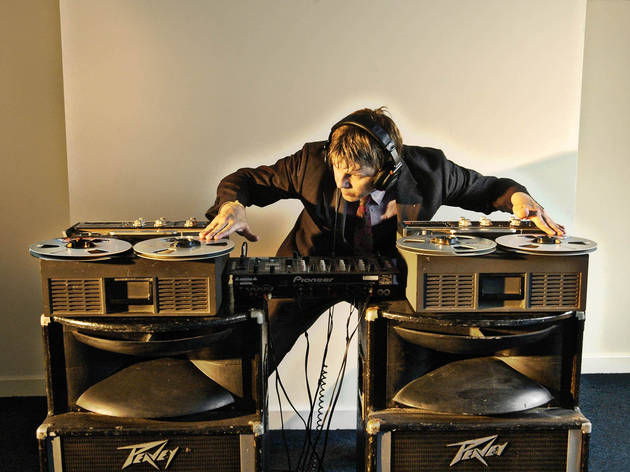 Listen to DJ mixes of house, techno, dubstep and more from the best local or international spinners—including Gilles Peterson and Greg Wilson. Want to check out hot DJ mixes from some of the world’s best spinners? Of course you do! Here are some of the best sets that Time Out has recently (and not so recently) run, with clubland notables of all stripes—from international superstars such as Greg Wilson and Dimitri from Paris to New York underground vets like Danny Krivit and everyone in between—serving up the beats.RECOMMENDED: New York nightlife guide 2013 Featured DJ mixes Interview and DJ mix: Ben UFO Hessle Audio's Ben UFO plays at Mister Saturday Night and mixes the latest FabricLive compilation. DJ mix: Gilles Peterson The beloved London spinner hits NYC for the first time in over a year. DJ mix: Jus-Ed The veteran deep-tech DJ, producer and head of the Underground Quality label. DJ mix: Dimitri from Paris The Gallic disco don Dimitri from Paris warms up for his next Deep Space set. DJ mix: Levon Vincent The Novel Sounds man celebrates a new Fabric mix at Blkmarket Membership. DJ Mix: Robert Babicz Check this choice mix of electronic house from the German vet. DJ mix: Greg Wilson Check his glittering set of disco, electro, boogie and more. DJ mix: Nicole Moudaber A hot mix from the rising tribal-tech star. All DJ mixes DJ mix: H-Foundation H-Foundation's Hipp-E and Halo gear up for a gig with their fellow Soma duo Slam. OnSaturday, January 19, Roots Events is presenting 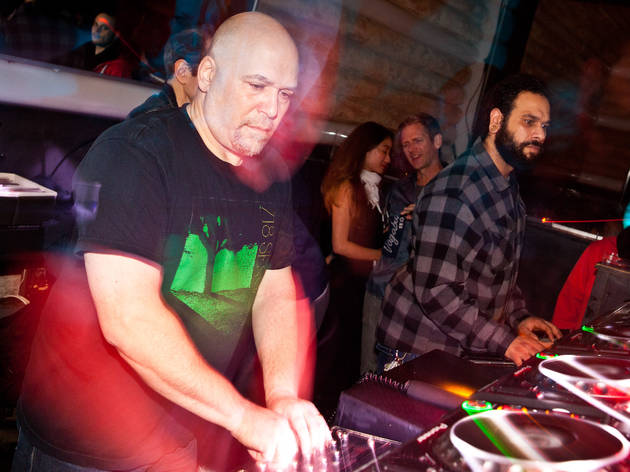 Cielo finishes off its tenth-birthday fun with a fantastic 4/4 fiesta. Cielo’s weeks-long tenth-anniversary celebration included plenty of great nights, with parties featuring the likes of Horse Meat Disco, Wolf + Lamb and Soul Clap, the Martinez Brothers and other stars of the house, techno and disco scenes. But the ever-youthful club may have saved the best for last: The final party of the series, tossed in conjunction with the venerable Nervous label, featured Norway’s world-conquering Todd Terje and New York City deck icon Danny Krivit on the wheels of steel, with Walker & Royce opening—and it was a killer party, with a great selection of house, disco and boogie keeping the dance floor packed all night long. Follow Bruce Tantum on Twitter: @BruceTantum You might also like Interview: Cielo's Nicolas Matar Cielo's head honcho talks about the venerable club's past, present and future. Cielo is ten years old, which by our calculations is 70 in nightlife years. And it still looks so pretty! One of the top boîtes of the city, the country and the world (it’s been on a bevy of “best clubs” lists over the years), the Meapacking District spot is in the midst of weeks-long anniversary celebration—but head honcho Nicolas Matar still had time to chat about Cielo’s past, present and future. Time Out New York: It was about 11 years ago when we were standing together in an empty concrete room, the space that was to become Cielo. Are you surprised that we are still talking about that ro 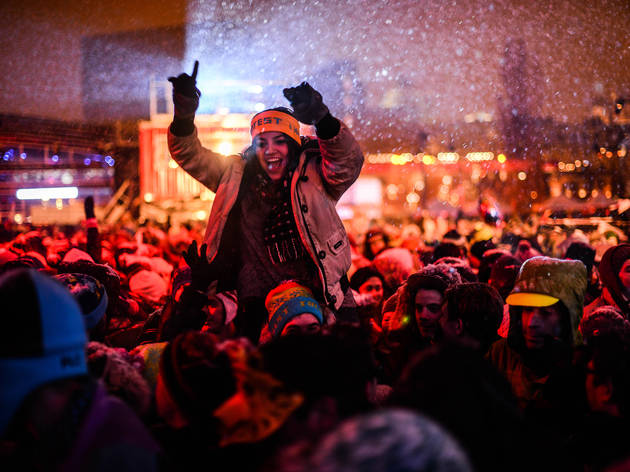 Despite the bone-chilling weather, the amazing wintertime electronic-music shindig Igloofest packs in Montreal's party people. TONY had the good fortune of attending the second weekend of Montreal’s ongoing Igloofest, a monthlong electronic-music hoedown held outdoors on a pier along the Saint Lawrence River. Just how crazy is it to toss an outdoor festival in Montreal in the middle of winter? Here’s how crazy: On our first fest night, the temperature was 14 degrees below zero. And that’s Fahrenheit! Luckily, the music played by the fabulous lineup, which included Germany’s Ellen Allien and Pan-Pot, France’s Miss Kittin and Siberia’s Nina Kraviz (who probably thinks of 14 below as a steam bath), was hot enough to keep the frostbite away. If you hurry, there’s still time to catch the shindig’s final (and with any luck, less frigid) weekend, with sets coming courtesy of Joy Orbison, Ben UFO, Chris Liebing, a slew of their fellow international superstars and a crew of very cool locals. Igloofest’s final weekend runs from Thursday, February 7 through Saturday, February 9. Follow Bruce Tantum on Twitter: @BruceTantum You might also like Photos: Cielo Tenth Anniversary wih Todd Terje + Danny Krivit Cielo finishes off its tenth-birthday fun with a fantastic 4/4 fiesta. Cielo’s weeks-long tenth-anniversary celebration included plenty of great nights, with parties featuring the likes of Horse Meat Disco, Wolf + Lamb and Soul Clap, the Martinez Brothers and other stars of the house, t 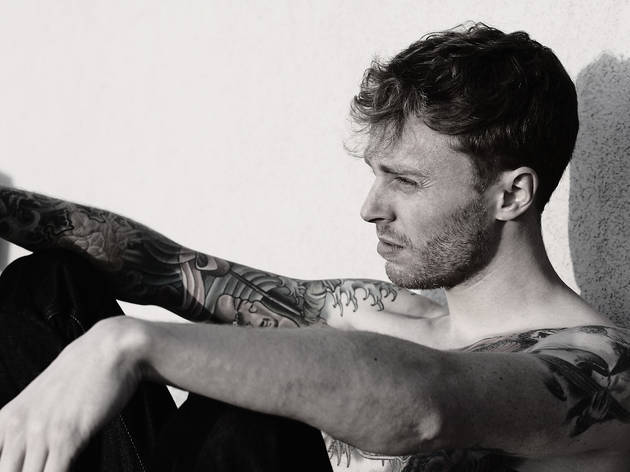 The evolution of the talented FaltyDL's sound continues with the release of a new album. In the late aughts, Drew Lustman, better known as FaltyDL, came to the electronic-music world’s attention via a series of intricately crafted, jungle-tinged IDM EPs. But his latest album, the beautiful Hardcourage—which sees him moving from the Planet Mu label to the venerable Ninja Tune—repositions Lustman as a creator of deep, sumptuous and emotionally engaging gems. He’ll be celebrating the LP’s release with a gig at Mister Saturday Night on Saturday 26.Does the name of the new album have any particular significance? In the past year and a half or so, while I was making the album, I was also deciding what label to release it on, as well as getting into a new relationship and moving to a new apartment. You know, the kind of life stuff that happens to all of us. But at one point, I was like, Fuck it—I’ll just give this album to Planet Mu, I won’t change apartments…I’ll try not to challenge myself with anything. It took a lot of courage to go through with everything. Hadn’t you also released a track called “Hardcourage” just prior to the album coming out? Yeah, it’s a little bit confusing, I guess. That one is not on the album. I think that, at the time, I simply liked the way that word sounded. But began to realize that it meant a little bit more to me than just the name of a track, so here it is: Hardcourage.I was going to ask you about the label change. Was there any particular reason