As spring turns into summer, more and more top comics are heading into the city. One of our favorites is Jeff Garlin, who has a run of shows at Carolines this week. With the Curb theme stuck on an endless loop in our heads, we caught up with the effortlessly likable comic for a quick chat.

You left Twitter last year—is that a big bowl of regrets for you?
Zero regrets! I did it the same day as Louis C.K.—we were talking about it on the phone, and it was coincidental, we didn’t even plan it. I was like, “I dropped off Twitter,” and he’s like, “I dropped off Twitter!” We were talking last week and neither of us regrets it. It just made me feel bad, I never said something on there where I went, Oh, I’m glad I said that.

What made you walk away?
There were just enough times where people were making horrible comments. This person didn’t even say why they were angry at me, but he said, “I want to piss on your grave.” And I just thought, yeah, but why? [Laughs] What’s the motivation? I don’t know if it’s just a guy who’s always looking for graves to pee on. He certainly let me know mine was on his agenda.

I’ve heard you say that you can’t talk about politics in your comedy, because you just get angry and can’t find the funny. Do you still try, or is it impossible for you?
That’s very true, yes. I don’t know how to make it funny and I don’t know how to not get angry. I mean, you can be angry and still be funny, but I’ve not found how to take politics and just make it funny. I get nuts! I have interest in social issues, but politics angers me and it’s…ugh, here I am, I’m getting angry and I have no words for it!

It seems like social issues and politics are two completely separate things anyway.
Two completely separate things—I’m passionate about social issues. Politics, here’s the thing, I don’t have faith that most of the elected officials do the right thing or care to do the right thing. I think it’s all about fear and covering their ass and playing things safe.

You worked in the box office at Second City with Stephen Colbert, and you were roommates with Conan O’Brien. Any other comedy titans you shared humble beginnings with?
Jon Stewart—he’d stay in my apartment when I went to L.A. It’s funny you said the term humble beginnings—my whole life is humble now. By the way, the idea of someone saying they’re humble is so nauseating, I’m going to stop right where I’m at.

Do any of you guys ever have time to get together and reminisce?
No, it’s just not easy to see one another—we’re all so extraordinarily busy. It’s fun seeing your friends go on to huge success, it’s neat. But it’s really difficult because not only are they phenomenally successful but they have families, so when they do have a free minute it’s not like, Oh, I’ve got to get together with Jeff. All I want is to have time for a nap.

You have a lot of TV and movie credits. Which one are you most proud of?
Wall-E. I couldn’t believe I was involved in something so wonderful. Andrew Stanton asked, would I be interested in being involved? He said, we’d like to fly you and your wife to Pixar to let us present you with what we want to do. And I thought, yeah, fly me up! Like you’ve got to convince me to be in a Pixar movie. I worked three years on that movie and I didn’t see a second of it until I actually saw the cast and crew screening. I cried, I couldn’t believe I was part of something like that.

Of all your IMDB credits, the one that stood out for me was “Donut Jerk” in Robocop 3.
Yeah, I actually had to audition for that. I was living in Chicago and I flew down to Atlanta, and we shot that all night long. I didn’t know there was such thing as a spit bucket, you know, to spit out the food during takes, so I ate about 36 doughnuts. I was crazy sick, oh my God, that was nuts.

It’s pretty much mandatory to ask—will Curb Your Enthusiasm ever come back?
Well, when I come to New York, I’m going to see Larry [David]’s play. I think that when I spend some time with him we’ll talk about that. It’s entirely up to him.

When the show was originally being planned, did everyone want to be in it because of Seinfeld? Or did it seem like a weird show to work on at first?
No, oh my God. The thought that we improvised—people were like, what? We just did what we thought was funny, we had no idea that the show would become an iconic thing. I mean, I’m on a hit TV show, The Goldbergs, and people still ask me all the time about Curb Your Enthusiasm.

Do you have a favorite moment from the show?
My favorite episode is “Wandering Bear,” where Larry and I are into Girls Gone Wild. I don’t think they make those anymore, they were such a big thing. I don’t know if there are college girls in their dorms, just waiting to go wild… 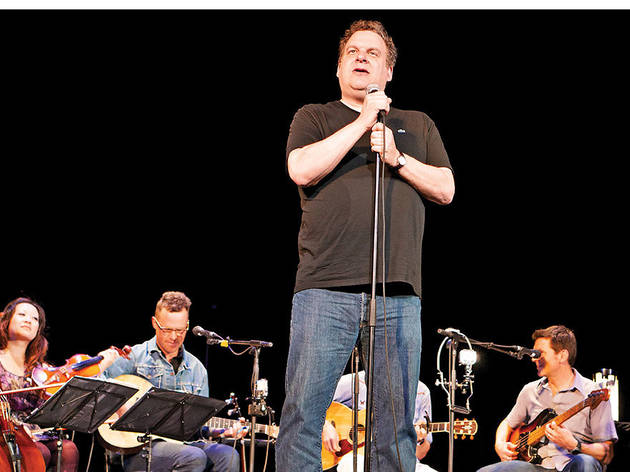 Long, long before Curb Your Enthusiasm, Mad About You and his many film appearances, Jeff Garlin was a touring stand-up. On the mike, he's got a bright, upbeat presence that's easy to connect with, as well as a keen eye that lends his jokes an extra snap.