“Queen for the people” Bob the Drag Queen sure picked one hell of a year to win RuPaul’s Drag Race. Before she crowns America’s Next Drag Superstar at the Live Season Finale and Coronation on Friday, June 23rd, the very funny New Yorker and star of the new movie Cherry Pop spoke to us about her reign, the current political climate and how her LGBT fans can be more active.

You just did your first big year in the public eye. Someone is about to take this crown, and I know it’s kind of arbitrary—
I don’t take the reign as an arbitrary thing. I take it very seriously, actually. I’m the queen. I’m the goddamned queen.

How have you been politically active as America’s Next Drag superstar?
This year I’ve done much more fundraising. I can raise a lot more money through activating other people than I could ever have before. I didn’t have that power like I do now. I feel like I’m much more useful outside of jail activating others than I was behind bars. [Editor’s note: In 2010, Bob was arrested in midtown for stopping traffic during a demonstration for marriage equality.] And if there ever comes a point where I’m more useful behind bars, then I’ll probably get arrested again.

It seems like drag is the last subversive space left. As a drag comedian, do you feel like you have to walk on eggshells now?
I don’t walk on eggshells. I’m of the Joan Rivers brand. I would rather go down in flames that apologize for making fun of Donald Trump. I would literally rather go down in actual flames than apologize for making fun of a man who has done so much to marginalize my community (and by my community I mean the black community and the queer community). I can’t believe that anybody in this world has the audacity to get mad at Kathy Griffin—the comedian who holds up the image of a fake head— while people will literally die because of Donald Trump’s actions. I have a bad habit of derailing every interview I do.

It’s nice to interview a drag queen and not have to get the standard answers.
I hate that shit. “Who’s your drag mom?” “How long have you been doing drag?” I don’t have a drag mom, I’ve been doing drag for eight years, I’m from New York City, I love Whoopi Goldberg and Chris Rock. But if you want to know my real opinions, that’s what I’m going to [give] do. I will derail every interview I go on, because I am a loudmouth and I have speech impediment, and I can’t shut the fuck up.

What is a good way for your fans to be politically active?
Here’s one thing: You cannot be a male and not acknowledge your inherent male privilege. Let’s just start with that. And people say: What is male privilege? Well, I’ll be more than happy to tell you without you asking me. Male privilege is the fact that I can leave my house at any hour and go to the ATM, and I can almost guarantee you that I’m not going to get raped. That’s what male privilege looks like. I can go to a job and almost guarantee that if I have the exact same qualifications as a woman who is applying for the same job, I’ll probably make more money than she does. So if you can’t acknowledge your male privilege, than you can never help anyone. Ever. And that goes the same with white privilege. Even on small scales, the difference between trans women who can pass and trans women who can’t pass. We all have a privilege, you see what I’m saying?

Do you ever feel like we’re policing ourselves? Take Drag Race for example: RuPaul has had to correct her language for being transphobic. Is going after someone like him constructive for us?
That’s the difference between a micro and a macro aggression. You have RuPaul saying “Ooh girl, you’ve got she-mail,” versus someone passing a law that will assure that trans women end up dead, like making them use restrooms that they don’t want to use. Who is that transphobic governor in North Carolina? Pat McRory. That is who you need to be directing your attention to. Not the one person who has actually put more trans women on TV than on any other show in the history of television. No show in the history of TV has ever told the stories of more trans women of color than RuPaul’s Drag Race. It is the most important show to queer culture that has ever existed, and for people to attack RuPaul as if he’s the enemy is beyond absurd.

But outside of that example, you see what I’m saying? It’s much easier for us to pick on ourselves. I should know Pat McRory’s name, but I’m more focused on Kathy Griffin’s story.
People are more interested in being offended than getting anything done. I genuinely think that people don’t see the big picture. If you’re going to direct attention at your own community for some little insignificant crap, then don’t waste your time on the internet because you’re more of a detriment than you are a help. You are literally a demerit to the cause. I made a joke about [season 9 competitor] Aja’s skin. People freaked out. Aja doesn’t have a problem with it. Aja and I are friends. I’ve known her since she was 16 years old. I can’t believe that anyone has the audacity to sit in this country and complain about a drag queen making fun of your skin when there are people in this world suffering far worse atrocities than people making fun of your skin. That’s what you waste your time standing up for. You’re on this earth for a limited amount of time, you’re a blip in the history of this world, so use your time efficiently.

I loved you on High Maintenance. Will you be in the new season?
I will not be on High Maintenance, but this summer I will be on Playing House. I’m in Rough Night. I am in Cherry Pop and my upcoming stand-up special Suspiciously Large Woman. I saw someone write online: “Bob is the least visible winner ever.” I’m like: least visible? I’ve been in three movies, I’ve done four TV shows. Girl, get out of here.

How has drag changed in NYC since you got your start?
I’m not a part of the New York City drag scene any more. I’m an international queen. Apparently, drag queens are like gremlins. You pour water on them and now there’s  a million in the city that I’ve never even heard of. I’ve been gone for a year, and now and there’s all these new queens I had no clue existed. I love it.

How do you feel about this season of Drag Race as compared to your season?
The queens seem a little more sensitive than the queens from my season. We were probably more old-school and don’t apologize about what we say, whereas these queens apologize a lot, on camera and off camera. I can’t handle it. I mean, good for you, but it’s not my thing. I’m not here to tell you to be less sensitive. If being you has gotten you where you are, then good for you. But we were more brazen, shall I say. 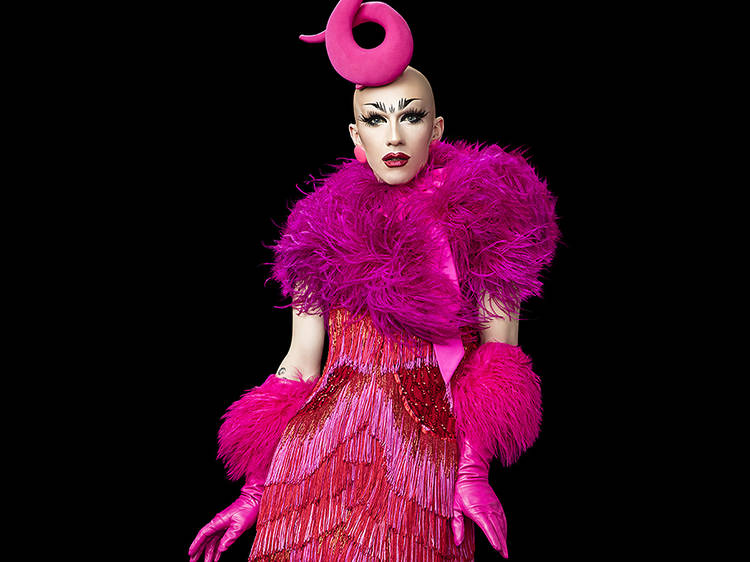