In early May and again in June, the superb stage and screen star Oscar Isaac played the lead role in The Oedipus Project, Theater of War Productions' reading and discussion of Sophocles' Oedipus the King. These two Zoom performances were among the very best virtual theater offerings of the lockdown period. On Sunday, August 9, Isaac is joining the company for the third time in what promises to be a must-see event: a free, live-only revival of adapter-director Bryan Doerries's Antigone in Ferguson, presented to mark the annual Michael Brown Memorial Weekend and featuring an extraordinary post-show discussion about social justice and racialized violence.

“Working with Oscar Isaac on The Oedipus Project and Antigone in Ferguson during the pandemic has been one of the highlights of the past five months," says Doerries. "Oscar has brought such a high level of talent, commitment and technical ability to our virtual performances that he has transformed the way we think about our model and what is possible on Zoom."

Antigone in Ferguson will be streamed live at 8:30pm EDT (1:30am BST) on Sunday, August 9. Tickets must be booked in advance, so make your reservation here. It can only be viewed using Zoom. Attendance is free, but donations to the Chosen for Change fund are encouraged.

New Yorkers may remember Antigone in Ferguson from its 2018 production at Harlem Stages, which we previewed here and which returned for an encore run in 2019. The piece combines choral music, group discussions and readings from Sophocles' political tragedy Antigone: the tale of a Theban woman confined to a cave by a tyrant who feels she protests too much. Like all Theater of War shows, it specializes in drawing connections between classical texts and burning contemporary issues—in this case, the 2014 killing of Michael Brown by a police officer in Ferguson, Missouri, which was a key inflection point in the Black Lives Matter movement.

In the reading, Isaac—who plays the Theban king Creon—is joined by Tracie Thoms as Antigone, Marjolaine Goldsmith as her sister, Ato Blankson Wood as her fiancé, Willie Woodmore as the blind prophet Tiresias and New York City Public Advocate Jumaane Williams as a messenger and guard. A live choir conducted by Dr. Philip Woodmore will accompany the performance, and two of its soloists, De-Rance Blaylock and Duane Foster, have a special relationship to the subject: They were Michael Brown's teachers in high school.

At least as important as the reading itself, however, is the conversation that follows it. Immediately after the performance, viewers will hear a response from a community panel that comprises Gwen Carr (the mother of Eric Garner), Valerie Bell (the mother of Sean Bell), Marion Gray-Hopkins (the mother of Gary Hopkins Jr.) and Uncle Bobby X (the uncle of Oscar Grant).

Afterward, the dialogue will be opened up to the home audience, facilitated by Doerries and Ferguson social worker De-Andrea Blaylock-Johnson. “Culture is typically a one-way stream,” Doerries recently told St. Louis magazine. “We’re using Zoom’s webinar platform, which can hold up to 50,000 people. If you raise your hand, there is a possibility you may end up on screen. This new online model creates an amphitheater that’s larger than ever before.”

That presents a rare opportunity for theater lovers. "What almost never happens in post-show discussions starts to happen: The conversation retroactively infuses the reading we’ve just seen with more meaning, import and complexity," wrote Helen Shaw in her Time Out review of the 2018 production. "2,500 years ago, the first democracy thought theater was a crucial dimension of citizenship itself. Antigone in Ferguson reveals and revives that purpose. Everything ancient is new again." 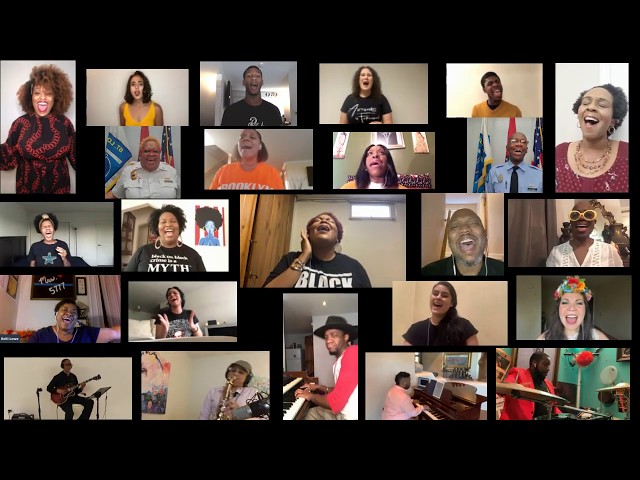